Stardew Valley: Alex Guide (All You Need to Know)

A guide on all of the information needed for the bachelor Alex in Stardew Valley.

During Spring, Alex exits his home at 8am unless it is raining. He stands by the tree to the right of his house, playing with his gridball, and he moves towards the left of the fenced-in area in the afternoon.

During Summer, he can be found on the beach in the morning and running the Ice Cream Stand to the left of the museum in the afternoon. On the 16th of Summer, he has an appointment at the clinic.

During Winter, he works out at the Spa almost every day. When he is not there, he will be at his house.

Shown below are Alex’s schedules prioritized highest to lowest. For example, if it is raining, that schedule overrides all others. 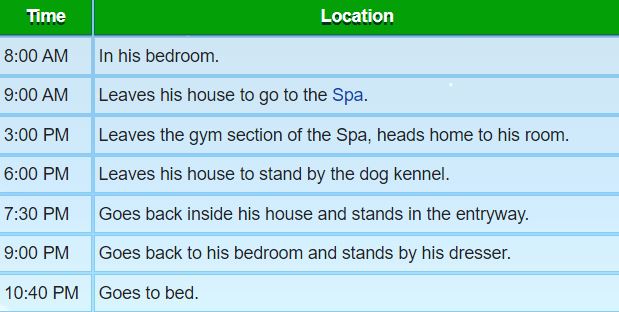 Sunday If the player has seen Alex’s 14-heart event 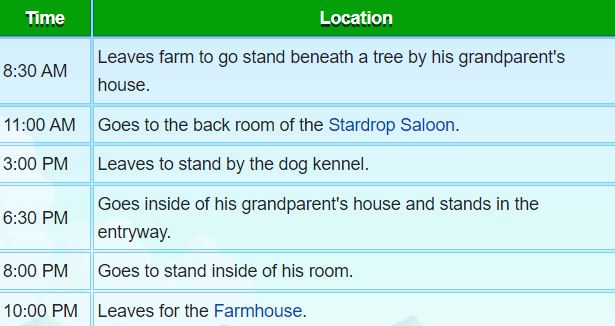 You can give Alex up to two gifts per week (plus one on his birthday), which will raise or lower his friendship with you. Gifts on his birthday (Summer 13) will have 8× effect and show a unique dialogue.

For loved or liked gifts, Alex will say:
“You remembered my birthday? I’m impressed. Thanks.”
“Oh, is it my birthday today? I guess it is. Thanks. This is nice.”

For neutral gifts, Alex will say:
“For my birthday? Thanks.”

For disliked or hated gifts, Alex will say:
“It’s my birthday and you give me this? Is this some kind of joke?”

Likes
“This is cool! Thanks.”

Note that Dinosaur Eggs are considered Artifacts and not Eggs for gifting purposes. 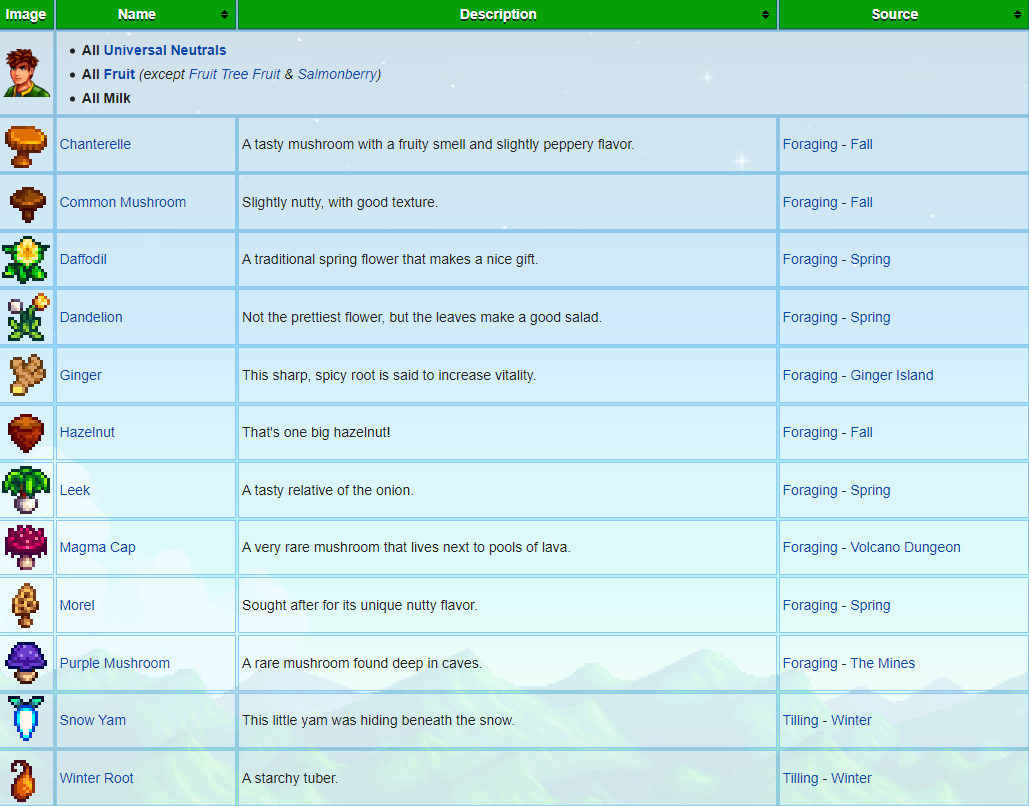 Hate
“Are you serious? This is garbage.”

Alex lives with his grandparents, George and Evelyn. He is friends with Haley, and will dance with her at the Flower Dance if neither of them are dancing with the player. He also has a dog named Dusty. You can find Dusty’s name from Pam or from Alex in a cutscene. 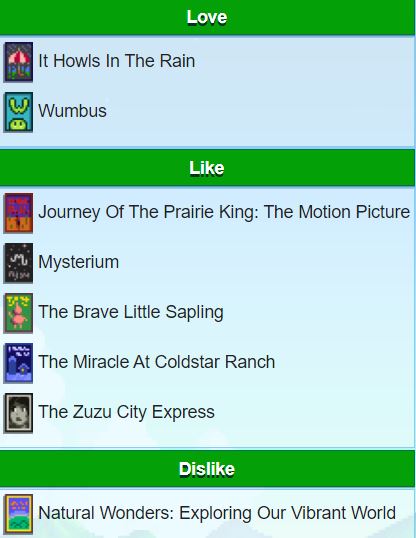 On a sunny summer day, visit the beach when Alex is there.

Details
You see Alex with his gridball. He greets you and tries to toss you the gridball. You fail to catch it. He laughs and says it was a nice try. He goes on to tell you he’s sure that he’s going to become the first professional gridball player from Stardew Valley. He asks you what you think his chances are.

Details
Alex is next to the dog pen near his home. He’s talking to the dog, whose name is revealed as Dusty. He comments that both he and the dog have been through a lot and that he feels misunderstood. You come out from behind the Saloon, and Alex asks if you heard any of that.

Either way, he says the reason that he lives with his grandparents is because of his dad. His dad was an alcoholic and would verbally abuse Alex, calling him “worthless”. One day, his dad left, and shortly after that, his mother got sick and passed away. Alex goes on to say that he shouldn’t dwell on it and doesn’t need sympathy. Trying to lighten the mood, Alex offers you the opportunity to see what Dusty will do for a barbecued steak.

Details
You approach him while he stares at his bookcase and laments the fact that he hasn’t read a single book in it. He tells you that he’s worried he won’t get anywhere in life without being knowledgeable and that he feels worthless.

He decides that if he works hard, he can accomplish anything. He suggests that you and he can have dinner and discuss philosophy.

Enter Alex’s house when he’s there.

Details
Alex expresses doubt about being able to go pro as a gridball player. He apologizes to you for acting rude and arrogant and appreciates how you stuck with him despite all that. You provide some encouragement (no choices necessary), and Alex will return to his strength workout with renewed vigor.
As of 1.3, if you enter the house right after Alex, he will not have had enough time to walk to his room and open the door, so you will get stuck there during the cutscene. However, you can still press “Skip” to resolve this

Details
Alex is sitting on the beach crying. You approach him and sit down next to him. He says today is the day that his mother died 12 years ago. He regrets not being able to thank her for taking care of him when he was a kid. The only keepsake he has left is his mother’s music box. Alex opens it and plays it for the both of you. As the music plays, you see a vision of Alex’s mother happily cradling baby Alex in her arms. As the music fades, he asks what you’re thinking.

After calming down, he says the two of you should head back to town. Before you leave, he nervously asks you not to tell anybody that he was crying. You laugh and walk off while he hurriedly chases after you.

Exit the Farmhouse in year 2+ between 6am and 8:20am on any day other than Sunday. You must have 5,000g available.

Details
Alex will stop you and ask for 5,000g for a ‘secret project’. If you accept, he will remark that it will be ready to be seen on Sunday.

Part 2 can be triggered by entering the saloon. Alex, Kent, Shane, George, and Gus can be seen watching a gridball game in the backroom , half of which has been decorated with gridball memorabilia and a TV. The other half still has barrels, and storage.The player walks in, and Alex tells the player that although his dream of going pro may not have been realised (though he assures the farmer that he’s happy with his life now), this is a small way of realising it. Kent adds that it takes his mind off things, and Shane agrees. Gus tells the player that watching the game is good for business, too. The cutscene ends with the player saying that the guys have a new tradition now and that the 5,000g was well spent. 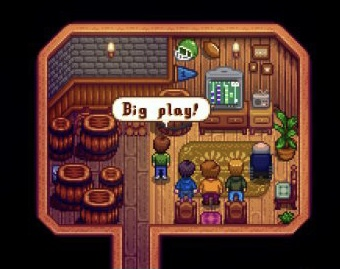 Once married, Alex will move into the farmhouse. Like other marriage candidates, he will add his own room to the right of the bedroom. He’ll also setup a workout space behind the farmhouse where he’ll sometimes go to lift weights.

On rainy nights, Alex may offer you dinner: Survival Burger, Dish O’ The Sea, Fried Eel, Crispy Bass, or Baked Fish. On days when he stays inside the farmhouse all day, he may make you breakfast: Omelet, Hashbrowns, or Pancakes.

Male players:
“Hey farm guy, I’ve got a question for you. Do you think I’ll ever turn pro?”

Female players:
“Hey farm girl, I’ve got a question for you. Do you think I’ll ever turn pro?”

Alex may randomly request an item at the “Help Wanted” board outside Pierre’s General Store. The reward is 3x the item’s base value and 150 Friendship points.

Thanks to ILY for his great guide, all credit to his effort. you can also read the original guide from Steam Community. enjoy the game.