Tears of Avia: How to Deal with Reflect (Tips&Tricks)

A quick guide with tips and tricks to dealing with Earth Elementals and Reflect Damage in general.

Reflect is one of the deadliest status effects you’ll encounter playing the game, and it can easily catch you off guard if you don’t deal with it appropriately. A poorly placed AOE could cause your mages to take several times over their own HP maximum in reflected damage. This becomes even more critical to be aware of in hardcore playthroughs where a single death is game over. Luckily it’s now been capped so that each attack can only cause you take 50% of your total HP maximum in reflect damage, however if you don’t heal; or make two attacks in a row then it’s still very easy for this to take you out.

So with that out of the way, what is it, how does it work, and how can you deal with it?
Reflect does as it says, a certain percentage of all damage done to an enemy (or ally) with reflect is bounced back on the attacker. Given that most of the game you will be doing an excess of damage compared to your enemies, this can add up extremely fast. Well despite the danger it presents Reflect is actually pretty easy to deal with since it only comes in two common forms.

The first and most proliferous way you’ll encounter reflect is Earth Elementals. These ent like enemies have a buff they can give themselves which grants them reflect, and is the biggest trap for new players who underestimate it. However this is always the easiest type of reflect to deal with.

The second and more uncommon but harder to deal with form of reflect is as a field effect from Obelisks on certain level maps. These are generally weaker in damage reflection, but are a permanent buff to any enemy on the map. These can only reliably be dealt with one way which I will elaborate on later.

Some bosses may or may not have reflect that behaves differently, but by the time you encounter any you should be familiar with the mechanic enough to have your own tricks in store.

Earth Elementals are by far the most common way you’ll run into Reflect while on your playthrough, and if you’re not paying attention they can catch you off guard. Especially in your first encounter, where they prove the greatest risk to you is in fact yourself.
This can be compounded by how much more damage you will be able to dish out than your own HP totals with glass cannon setups. 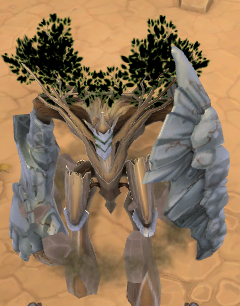 Earth Elementals do not natively have a reflect trait, but it instead comes in the form of a buff. This makes it viable to remove Earth Elementals on the first turn before they can grant themselves this buff without fear, however once they have had a turn you will have to make sure you’re keeping track of which elementals are safe to attack or which need more tactful approaches.

The animation for them applying this buff involves them generating a ring of floating rocks around their body, however just looking for this isn’t entirely full proof, the safer method is to hover over the target to bring up their display at the side of the screen and looking for this status icon:

If they have that small buff icon underneath then it means they are currently reflecting damage, and you’ll either need to wait it out or use one of the methods I outline here to counter it.

Obelisks are similar to field effects in Avia, they are features on the map that provide a buff to all entities belonging to the owning faction; either the enemies or the player.
One of the permanent buffs they can provide is Reflect, however they have a wider variety and reflect is comparably rare. In general Obelisks buffs should be tracked regardless of the type, but Reflect is a more noteworthy one.

Obelisk reflects are trickier to deal with than Earth Elementals, but the reflect is usually weaker as a result, and it’s possible for the player to take this buff for themselves as I will outline later.
Obelisk effects are also easier to spot than Earth Elemental buffs, as it will be displayed on the mission select on the map as demonstrated below:

An Obelisk in the field is also pretty easy to spot, however their location on the map and the enemies guarding them can vary, so it’s worth examining the battlefield before deploying any units. 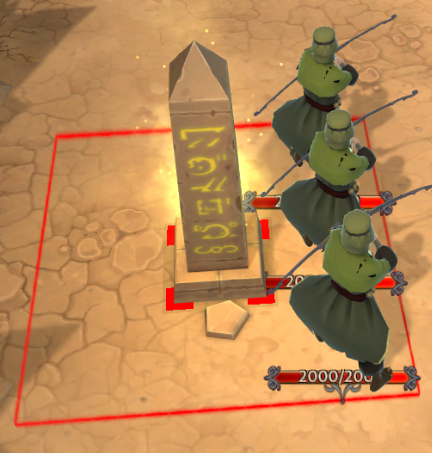 When it comes to dealing with reflect there are limited but versatile methods for each situation, Earth Elementals having the largest variety.

Rip Boon is a unique skill in that it only comes attached to weapons, primarily Staffs and Focuses. Rip Boon will only work on buffs from skills, and thus Obelisk permanent field buffs are exempt.

To identify a weapon with Rip Boon equipped look for this icon and description while examining weapons:

This means that you will be able to use the Rip Boon skill in battle, which I will demonstrate below.

Rip Boon effects three tiles, centred around the selectable middle tile. This means you’ll sometimes have to be clever about your targeting to extend the range. As with all skills, this row can be rotated.
In this example below, two Earth Elementals have lined up in such a way that I can target the tile between them and remove both their reflect buffs, allowing for me to AOE them immediately after. 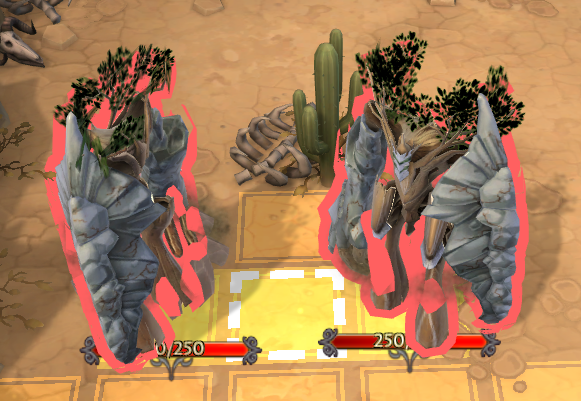 However despite its ease of use and versatility Rip Boon does have some drawbacks.
The most notable of which is that using it will consume your skill action for that unit, so to make best use of it you will need another to follow up with an attack to remove the Elementals.
It’s important to keep track of your party’s skill usage.

Deployable Summons are perhaps the most convenient way of dealing with Reflect, as they are viable against both Elementals and those with an Obelisk buff, not to mention bosses. And at higher skill levels they can be used for multiple turns, allowing you to essentially stack attacks with temporary party members, and since there’s no penalty for their death they make perfect sacrificial pawns.

The Ranger has an entire skill tree dedicated to Summons, but the important difference is in the two types. Only one type of those summons will have “Deploy” in the description, and this is the type we want. As this will create a new temporary unit on the battlefield that can be used to soak up the reflected damage by attacking in your stead. 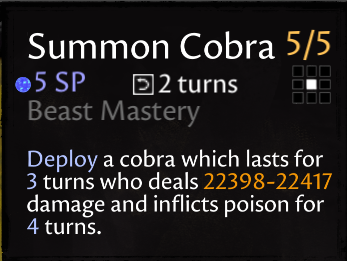 Deploy summons can be used like any other skill, but require the summoner to target an empty adjacent space. Once used the unit will come into existence, which allows the player to select it and move it around, more importantly also attack.
Summon Cobra is a permanent fixture in my party skills for this reason, but any other Deploy Summon is valid too.
In an alternative to the scenario I presented in Rip Boon, here I can use the Cobra to soak the damage for me. By moving into into range and then using its bite skill I can attack the Earth Elemental safely, as the reflected damage will be done to the Cobra itself and not the summoner. 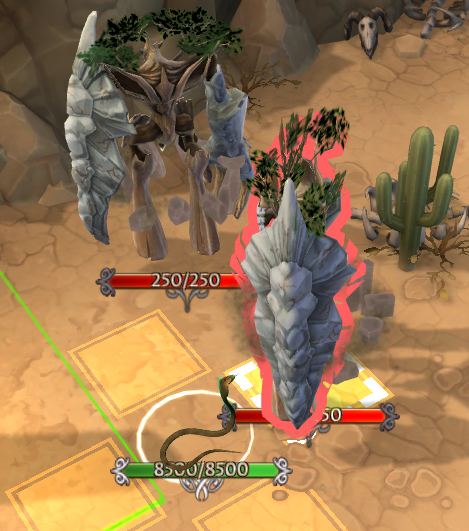 Since reflect damage is capped to 50% of your HP total, this means the Cobra will be able to attack the other Earth Elemental next turn, where it will die and be removed from the field.
If needed I can summon another once the cooldown ends.

Splash DOT is the most impractical method of dealing with Reflect, but in a tight spot it can be important to remember it is a potential option. Practically the only viable skill for this is Fireball, but there are other DOT skills which can be used in its place to lower effectiveness. 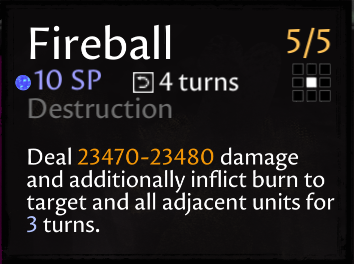 The trick here is in the fact that Burn is applied to adjacent enemies, but they aren’t given splash damage itself. The DOT effect will eventually kill them, but since you are not directly attacking them you will not take any reflected damage for it.

The shortcomings of this method are very notable though, for starters this requires you to attack an enemy, if it’s an Obelisk map this can be less than ideal from the start. The biggest issue however is enemy placement, it’s highly unlikely that you’ll conveniently get all the enemies with reflect to bunch round one unit you can attack with minimal risk…and even then you have to wait for them to die of the burn.

So although this does work, it’s not all too useful outside of a potential.

Exclusively to Obelisks, the only way to properly and permanently deal with Reflect is to capture them. Depending on the map the difficulty for this can vary wildly but there are some tricks to keep in mind.

First: Locating the Obelisk, you already know what an Obelisk looks like but some maps have multiple, so you need to find the Obelisk of highest tactical value and set that as your target. To do this you will need to deploy a unit (I suggest moving them one tile to the side so you can deploy a more useful unit later, then you can go back and cancel their movement to return them to the spawn tile without any drawbacks. Get used to cancelling movement, as this can be used in a lot of cool ways!)
When you hover over an Obelisk it will display its effect on the right of the screen: 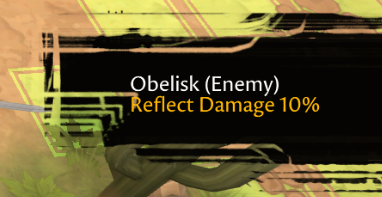 Second: Movement skills. Warriors and Mages have a nice combination of these, but Mages have the edge with the Portal skill which essentially lets you move three times in one turn!
To optimise your portal usage, first move your mage into the ideal location, then use the portal skill as far as you can, then your movement will be restored and you can move again. Any units that follow through the portal after its creation will also have their movement restored.
Combined with +MV and +RNG items along with skills like Lightning Speed then you can cross maps in a fraction of the time.

So now you’ve located your Obelisk and you can reach it ASAP.

How do you deal with it safely? Well Summons can help, or you can bite the bullet and accept that at least one of your units will be half dead on the first turn and use a healer to bring them back up to health. Either way, you need to clear out the enemies from within its radius.
In this example I’m going to use Iris to AOE them, luckily Reflect is capped to 50% your health total.

With the enemies removed, I can safely send a mage over using Portal and move them in to capture the Obelisk for myself. 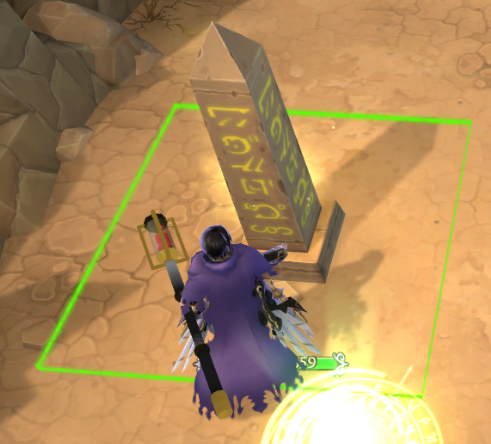 Doing so removes the reflect buff from the enemies and grants it to me instead: 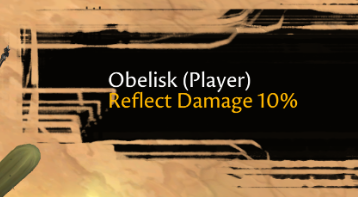