Here is a overview guide about the story boos in the game: name, location, stigma and rewards.

After clearing the game, you are able to refight any of the story bosses at level 80, by going to where you initially fought them and touching the memory of your battle materialised as a Remnant.

For the first victory against each, per playthrough, you will receive a rare Amplification Stigma, with above average stat boosts. These are probably among the best ones in the game (that are easily obtainable) – some of the higher ranking World Reward Stigmas provide on par or better bonuses (Eager Defector, Rocket Dive, Entelechy, and Doomsday Repair as an example).

If you want multiple of these Stigmas, you need to NG+ the same file again and again until you have enough. You are able to start another NG+ from a file that has already completed a NG+, so theoretically you could get up to 200 of a specific Stigma.

By going to any location where you fought a Musician throughout the story, Aria will let you know that there is a faint memory of a prior battle. She will ask you if you wish to touch the remnant – and if you do, you will fight that Musician again. 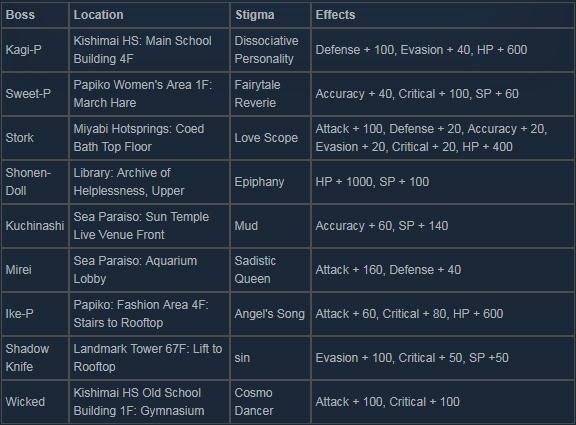 It is possible that these fights (and by extension, Stigmas) can only be obtained if you accept the Musician route.

In a similar fashion, if you return to the Sorrow Gate in the Grand Guignol with a party of Musicians, μ wil comment that there are memories of your battles with members of the Go-Home Club. Touching this remnant will put you into a boss-rush style battle against teams made up of the various members.