The Callisto Protocol: The Scripts for Run and Aim Toggle

Since there is no option in-game to use a toggle for running/aiming, I used AutoHotKey to get around that. Hopefully the devs will add it in a quality of life patch someday.

Use your favorite text editor (notepad++ or just notepad, etc.) to create a new document and copy and paste the text
For Run Toggle:

Save it somewhere you can access it easily, and
Make sure you save it as an .ahk file. Do not save it as a .txt! 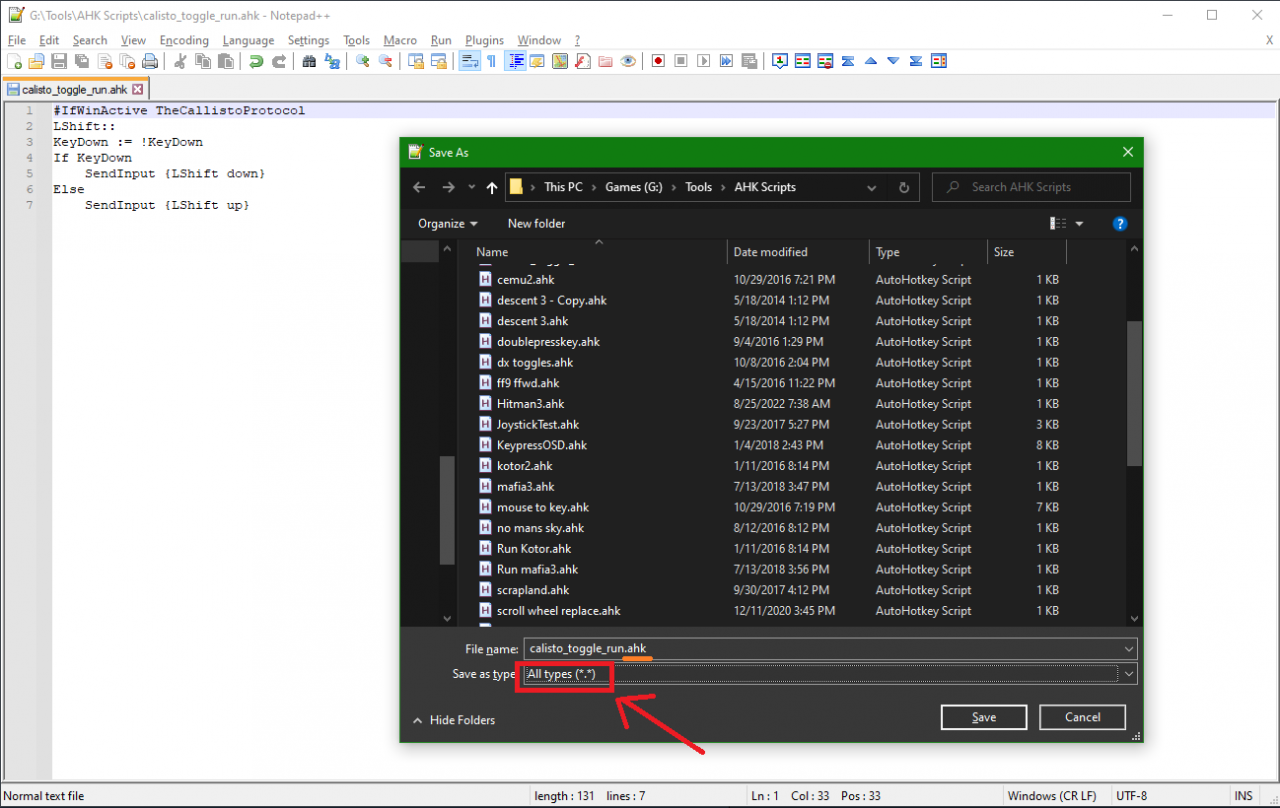 Also, the first line of the script checks if the active window is the game window. That way it only toggles the key if you are in game. If you alt+tab out of the game, pressing the key will behave normally.

How to use it

You will need a third party program called AutoHotKey. Google it, download and install. It’s a very well known app, and should be a part of every PC gamer’s toolset.

Once it’s installed, double click the .ahk file you created and you should see a green H icon in your notification tray. If you hover over it, it will tell you the name of the script.

if you right click it, it will give you options to edit it, reload, and exit the script.

The scripts I provided assumes the default bindings of Left Shift for Run, and right click for Aim.

If you have changed those default bindings in the game options, you will also need to change them in the .ahk script.

For example, I use one of my side buttons on my mouse for Run (because I use Shift for crouch), so my script looks like this:

You can run multiple .ahk scripts at a time, so if you want to use both the run toggle and the aim toggle, go ahead. They could probably be merged into one script, if you know what you’re doing.

I highly recommend changing your default key for Run to something other than Shift.
The reason is, if you press Shift to toggle the shift key down to run, and then press tab to access your inventory, the Steam overlay will open.

Remember, if you change it in the game options, also replace the 3 occurrences of “LShift” or “RButton” in the script to that same key. You can find the correct syntax in the autohotkey wiki online[www.autohotkey.com].

The run toggle deactivates in game if you have a cutscene, or open your inventory (even if it’s rebound to something other than shift) but AutoHotKey will still think the run key is held down, so after the cutscene or closing your inventory, you will need to press shift again to un-toggle it in AutoHotkey. And then again to toggle it back on in game.

If you toggle run on, then alt+tab out of the game, your PC will still think the key is pressed! just press it again to toggle it off, and it should behave normally until you are back in game.

I have not tested the aim toggle as of writing this, as I haven’t gotten far enough in game to acquire an aim-able weapon. I probably won’t test it once I do get a gun, as I prefer hold to Aim.

The script needs to be running when you are in game. You can start it before starting the game, or after, it doesn’t matter. This is why you should save it somewhere easy to access, or create a shortcut to the script on the desktop right next to the game’s shortcut.

The script will keep running even if you quit the game, you will need to exit the script manually to stop it. Right click the H in your notification tray, and click Exit. You can leave it running if you want, it won’t do anything if you are not in the game.

If you want the script to automatically close when you exit the game, you can add the following code after the #IfWinActive TheCallistoProtocol line

However, if you do this, you can only run the script if the game is already running! Otherwise it will start, see that the game isn’t there, and exit.

Thanks to DataSchmuck for his excellent guide, all credits belong to his effort. if this guide helps you, please support and rate it via Steam Community. enjoy the game.