This is a guide for Requiem beginners like me to simplify your build choosing. 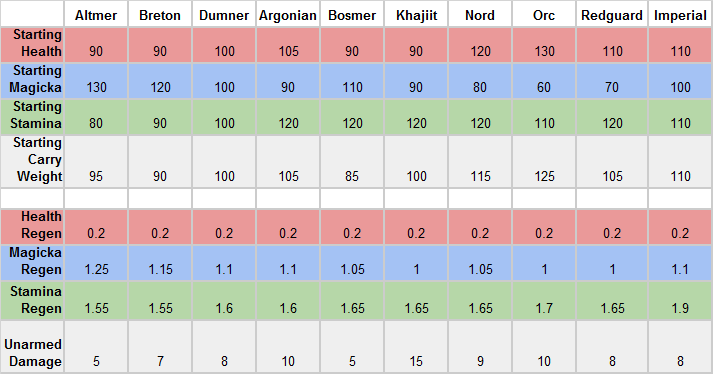 Once a day, High Elves can induce a mystical trance that allows them to tap into vast magical energies, making their magicka practically inexhaustable for a short time. Effect: Restore 100 Magicka a second for 30 seconds, can be used once a day.

Your Argonian blood greatly reduces your chance of becoming affected by both diseases and poisons. Effect: 75% Disease Resistance, 90% Poison Resistance.

Your Argonian lungs can breathe underwater, while you also find it much easier to swim than members of other races. Effect: Waterbreathing (can breath underwater).

Effect: 15% increased Stamina cost for Power Attack, can loot “Strange Meat (Food)” from dead humanoids, Strong Stomach bonus. +) Strange Meat: Restore 50 Stamina when eaten out of combat, restore 2 Stamina a second for 300 seconds, restore 2 Magicka a second for 300 seconds. Magicka regeneration bonus is disabled when you have the Stone of the Atronach ability. While the Stamina Regeneration bonus is active and you are a Bosmer (Wood Elf), your weapons do 20% more damage and blocking absorbs 20% more damage.

All animals around you will become your allies for the next day, however they will not follow you on your way. Effect: For 8640 seconds, nearby animals up to level 100 become allies, range 75, can be used once a day.

A Breton’s great influence on magic energies can be used to absorb <mag>% of the magicka from hostile spells for 8 seconds. Effect: 100% Magic Absorb Chance for 8 seconds.

Tempered in the flames of the Red Mountain and the heat of the Ashlands, your Dunmer blood greatly reduces all fire damage dealt to you. Effect: 65% Fire Resistance.

Your ancestors can be called upon in times of dire need. If invoked, they will cover you in protective shadows, almost negating all damage dealt to you for a short duration. Effect: Resist 95% of physical damage for 30 seconds, can be used once a day.

Imperials are granted additional stamina, regenerate it faster and can sprint much longer due to the drills many of them had to go through. Effect: Fortify Stamina by 50 points.

Every Imperial possesses at least basic rhetoric knowledge. Once a day, this allows to haggle for many bargains. Effect: Fortify Barter (increased sell price, lowered buy price) by 25% for 300 seconds, can be used once a day.

Your race is blessed with a natural agility and some people say also has an affiliation with crime. In any case, your lockpicking expertise is increased by 10. Effect: +10 Lockpicking Expertise.

Your eyes are exceptionally versatile and can become extremely sensitive to light, allowing a much better sight in dark areas. Effect: Toggles Night Vision.

Your Nord blood halves all taken frost damage and reduces all lightning damage inflicted to you by one quarter. Effect: 50% Frost Resistance, 25% Shock Resistance.

You can enter a trance that allows you to use your Thu’um again and again in a rapid succession. However, this is extremely exhausting, and therefore lasts only shortly and can only be used once every day. Effect: Shout Cooldown is reduced by 150% for 5 seconds, can be used once a day. +) Note that base Shout Cooldown is 150%. The ability is therefore intended to reduce it to 0%.

Your Redguard blood, tempered in the deserts of Hammerfell, grants you a very strong resistance to poisons and diseases. Effect: 75% Poison Resistance, 75% Disease Resistance.

Note: once you take a stone from given group, you will become locked to that group. For example, after taking Warrior you will be able to change your stone only to Lady/Lord/Steed and not others.
The Warrior Group
The Warrior

The Warrior strengthens those who bear his blessing, allowing a more efficient use with all kinds of weaponry.

Those under the sign of the Lady regenerate Stamina faster.

+) Unlike other Fortify Stamina Regeneration alchemy / enchantment effects, this does not provide Stamina regenerates while running’ bonus.

The Stone of the Lord grants those who possess its blessing increased damage resistance and weakened hostile spells.

The Steed grants those who bear its blessing increased Stamina.

The Mage Group
The Apprentice

The Apprentice grants a very fast regeneration of Magicka.
The Apprentice decreases your magic resistance. Thus, hostile spells deal more damage to you.

The Sign of the Atronach grants additional Magicka and a 50% chance for Spell Absorption, but makes it almost impossible to passively regenerate magicka, reduces the efficacy of magicka potions by one third and negates the long-term benefits offered by cooked meals.

Those under the Sign of the Mage are granted additional Magicka and find it easier to focus their thoughts while running.

Those under the Sign of the Ritual are capable of animating hordes of undead for a limited duration once each day.

The Thief Group
The Lover

Those under the sign of the lover find it easier to be attractive, intriguing and also use speech to get what they want…

Those under the Sign of the Shadow are able of becoming invisible and inaudible once a day.

+) While the Invisibility wears off if you interact with something, Muffle effect lasts to the end of its duration (300 seconds).

The Sign of the Thief grants wide-spread abilities to those who bear her blessing. This includes increased damage with bows and one-handed weapons as well as improved sneaking, pickpocketing and lockpicking skills, boosting lock picking expertise by 20 points.

The Tower grants a blessing of 20 extra carry weight and supernatural lockpicking skills. Expertise is increased by 40 and any effortless lock can be picked in plain sight with nobody noticing, creating a wax-molded copy of the key, if one exists.

+) Effortless locks are locks that, with your Lockpicking Expertise are considered ‘moderate’. For example, if you have 40 Expertise, locks to Adept level are considered ‘effortless’, but Expert and Master are not.

The Bite of the Serpent will paralyze and poison a target for a moderate duration.

+) Enemies who are Immune to Paralysis will resist the Paralysis effect. Includes the Undead, Dragons, Atronachs, Dwarven Automatons, some giant beasts, Spriggans, Wisps, many named NPCs, etc. However, spells and enchantments that give Protection to Paralysis (e.g. Arcane Ward (Rank III) spell, Stamina (Rank II) enchantment) do not resist this effect.