This guide is not deep, but it’s a current document from what’s available on the web, with some extra testing in-game, and how to Autowalk with controller. I welcome collaboration, edits, and adding platforms I don’t have. 🙂

Default Key binds for PC for The Long Dark 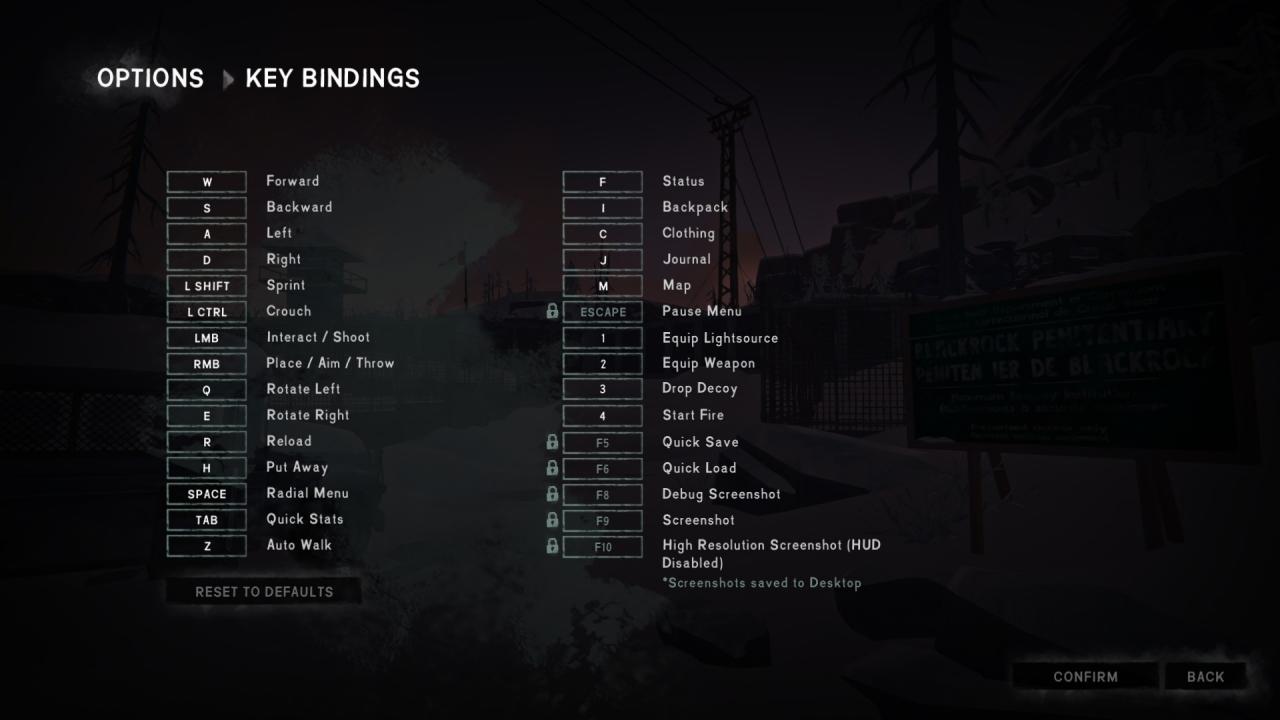 You can do almost everything from the Radial (Spacebar) with left- and right-click, but for crafting and repeated actions, the Inventory (I) is sometimes necessary or more effective.

Aim is always Right-click, and Fire is always Left-click – except for the Bow, where you Aim by holding Left Mouse Button and fire by releasing it, and right-click to cancel.

To engage in a struggle, select a struggle weapon by left-clicking on it, then click the Left Mouse Buttons at the tempo indicated by the growing struggle bar. The goal is to increase this bar towards full in order to win the struggle, else you die.

If you can’t keep up with this tempo, e.g. by moving one hand to the mouse and use two fingers to tap quickly, there is an option under Accessibility. This option will provide automated clicking at a high tempo, but one that might not be optimal compared to your own clicking speed or to the selected weapon.

The Autowalk key bind will not work unless you enable it under Accessibility. Once enabled, pressing the key once will go forward until you cancel it by interacting or move backward. Sprint and Crouch can be used freely while Autowalking.

Default controller binds for PC for The Long Dark

Caveat: This layout is from 2018, credit to Hlymzik for the image. It describes only some Gameplay (in-game) controls. Crouch has been moved to Left Stick Trigger, and LB is now Radial.

You can do almost everything from the Radial (LB), but for crafting and repeated actions, the Inventory (Y) is sometimes necessary or more effective.

Aim is LT, and Fire is RT – except for the Bow, where you Aim by holding RT and fire by releasing it, and LT to cancel. A visual cue is shown on-screen for weapons.

For light sources, a visual cue is shown on-screen as well. As a shorthand, RT is on/off, and LT is throw or place.

To engage in a struggle, select a struggle weapon with Left Stick and A, then mash A at the tempo indicated by the growing struggle bar. The goal is to increase this bar towards full in order to win the struggle, else you die.

It’s likely that you can’t keep this proper tempo without some sort of Autofire. There is an option under Accessibility. This option will provide Autofire at a high tempo. It might not be optimal compared to your own mashing speed or to the selected weapon. (Watch the struggle bar!)

The Autowalk control will not work unless you enable it under Accessibility. Once enabled, pressing it once should go forward until you cancel it by Interacting (A) or move backward, but currently this action is unavailable on controller, where it would be very useful.

On a PC you can use the key bind, but it might not be possible or allowed to connect a keyboard on some platforms, or it might not be supported by The Long Dark on that platform.

A suggested button to trigger it could be Right Stick trigger, which is currently (July 2022) bound to the same actions as A. This might be possible to achieve using the next section, Enabling Autowalk for Controller (Steam).

This brings you to the Controller Config interface. (If it doesn’t work, make sure Controller is enabled in the same menu, you may have to restart the game for this setting to take effect.) 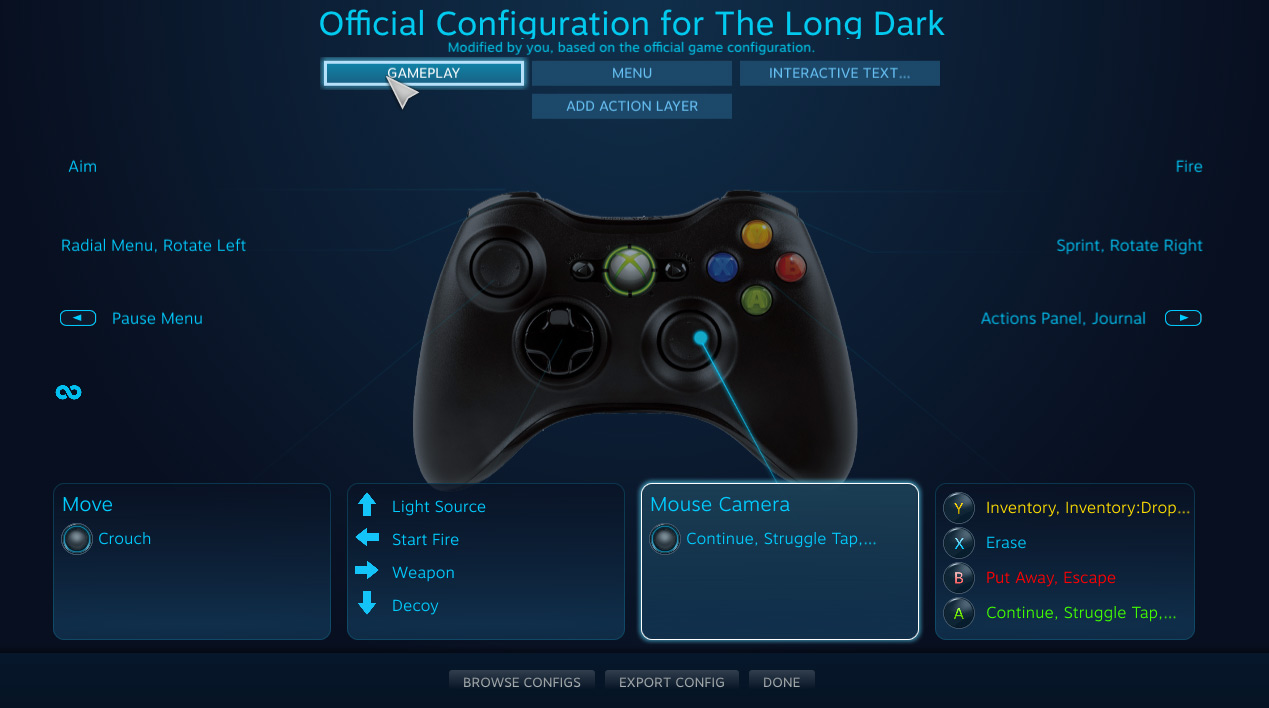 1. Click on the Gameplay Layer as shown in the screenshot.
2. Click Right Stick as shown in the screenshot. (We’ll use its trigger for Autowalk here, as it’s a duplicate of A.)
3. Click Add Activator on the right.
4. (Optional) change Interruptible to off.
5. Click the empty Binding box on the left.
6. Scroll down and click on Auto Walk.
7. Click Back twice.
8. Click Done.

Once back in the game, press B to go to the main menu. (The configuration change is saved by Steam, and for this game only. The settings you changed are not part of the Controls menu in the game.)

Test it out in-game. Now you can walk for hours without wearing out your thumb or your stick. 🙂

Similar steps can be applied to bind actions to any buttons on your controller for any Steam game.