Winning the Microbe Stage might look tough. This guide can help.

“Winning” here is defined as:

This might appear as a daunting task, since there are a number of things stopping you.

But have no fear, for I have a solution for you.

Life as a Prokaryote

You will want to get past the prokaryote stage as fast as possible. You can’t really be a plant here, since thylakoids are absolute trash. Being a sulfur muncher has its advantages, but you’ll be stuck hugging a vent for pretty much the whole game. Being an iron muncher is a decent plan, unique to being a prokaryote, but it’s slightly less efficient than pure glucose.

What you want to do is go pure glucose muncher.

“That’s a dumb plan” you might think. “Glucose is constantly going down, won’t I eventually starve?”

You are right. Which is why we are going to rush the nucleus so we can unlock the good stuff.

Generation 1 is straightforward. Fly inside the purple and orange clouds to win. Eat a white cloud if you need more glucose, which should be everywhere. 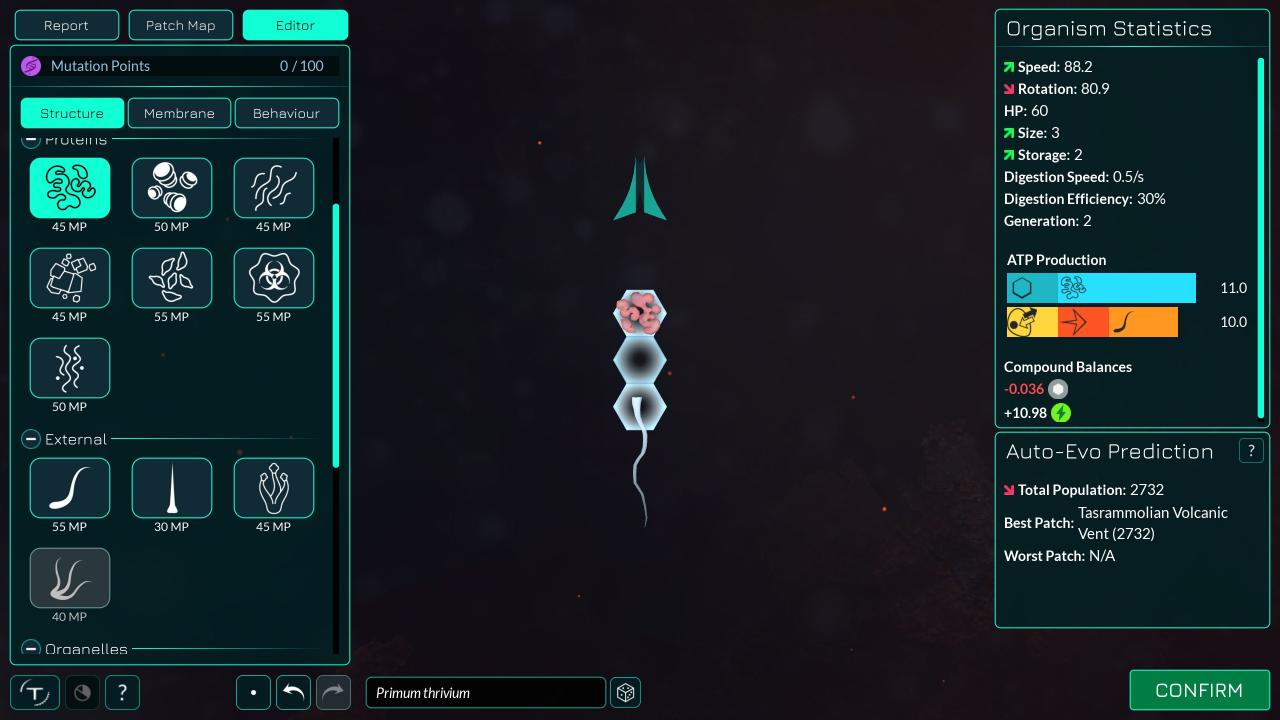 Yep we’re making a tadpole. Once again, you should have no difficulty with this generation. When you’re back in the editor, considering moving patches to one with more glucose if an adjacent patch has more. 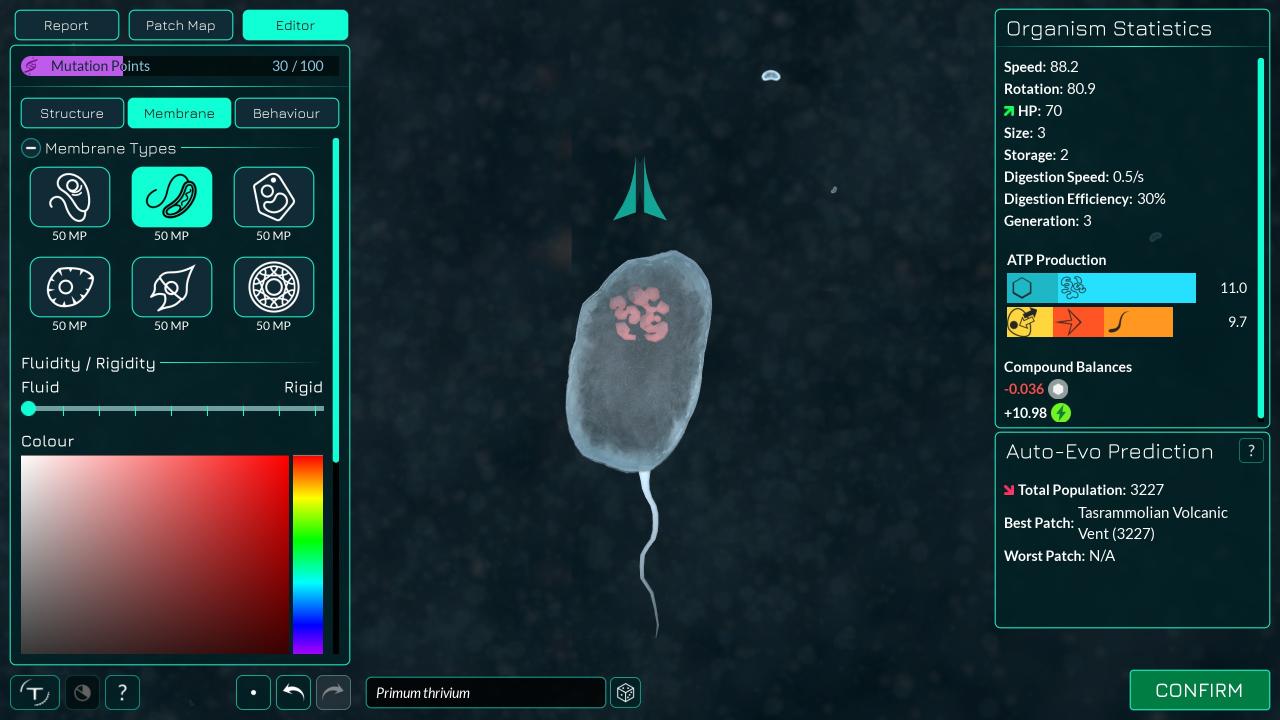 Still a tadpole. This time, go to membrane, choose Double, and move fluidity all the way to the left. We’re going to need the speed. Again, move to a patch with more glucose if one is available when you’re back in the editor. 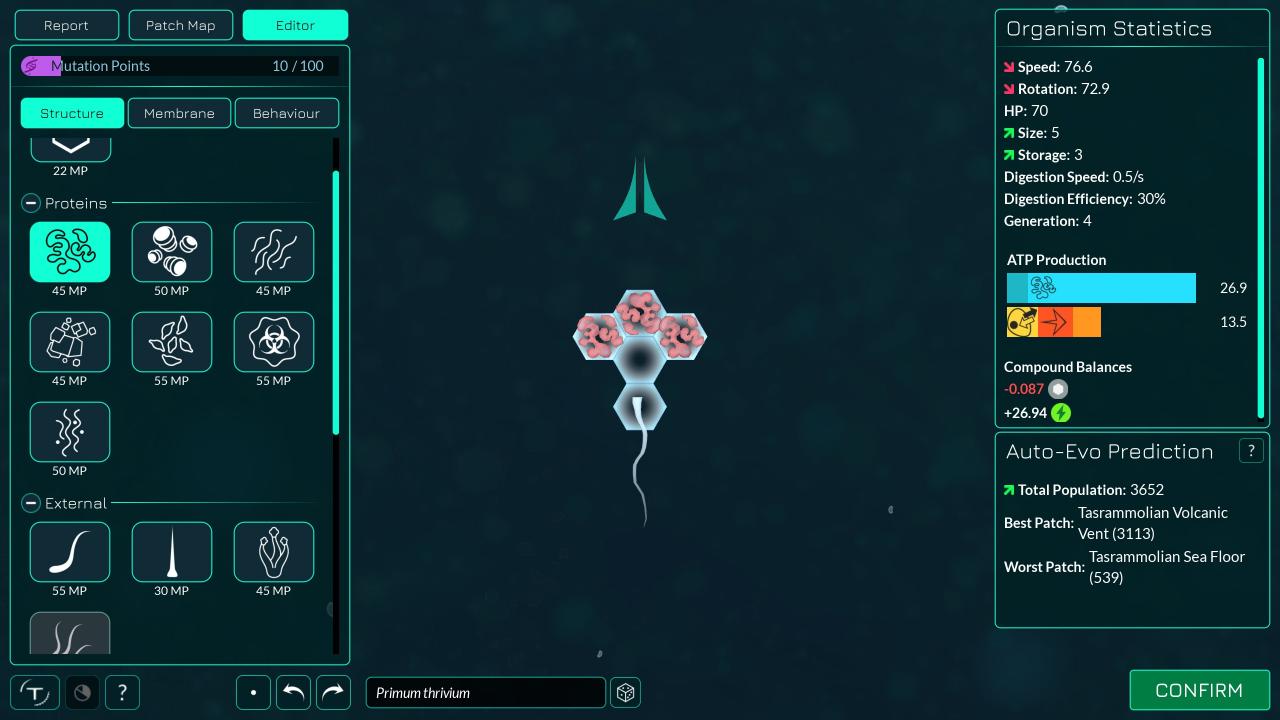 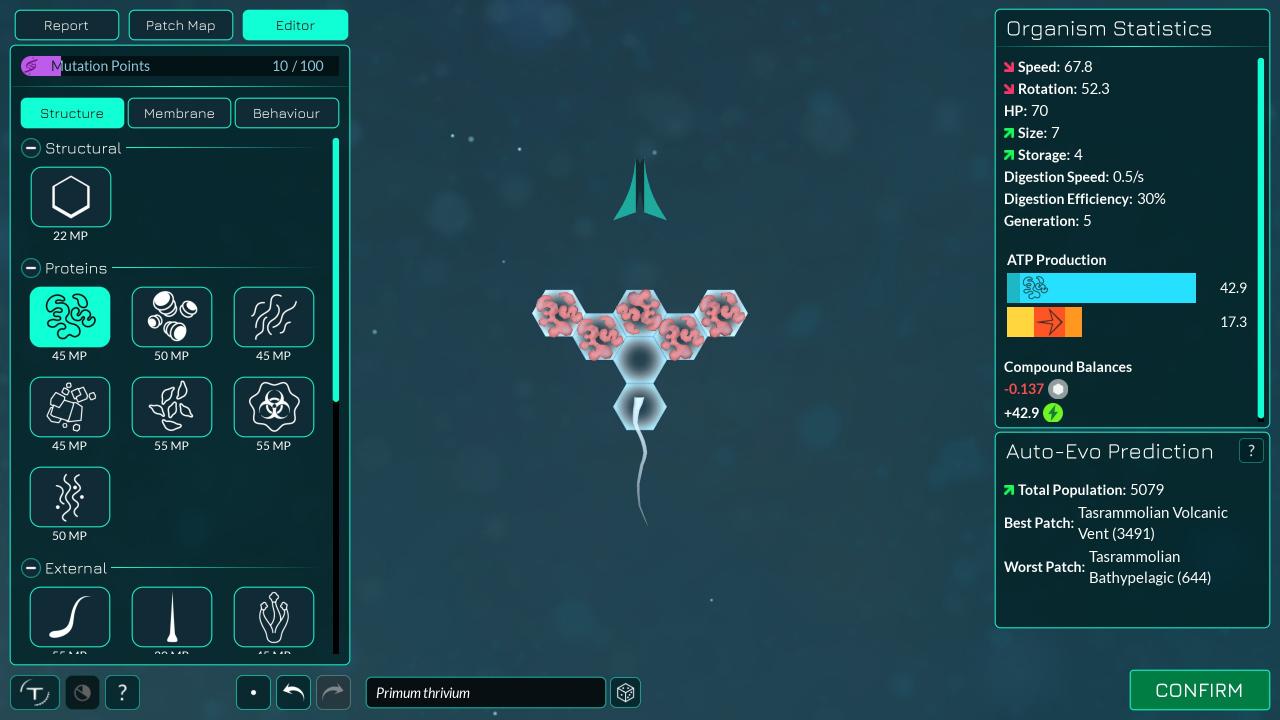 Expand a bit more to the sides with some glucose munching parts. We need enough to build the nucleus. Keep moving to better glucose patches. 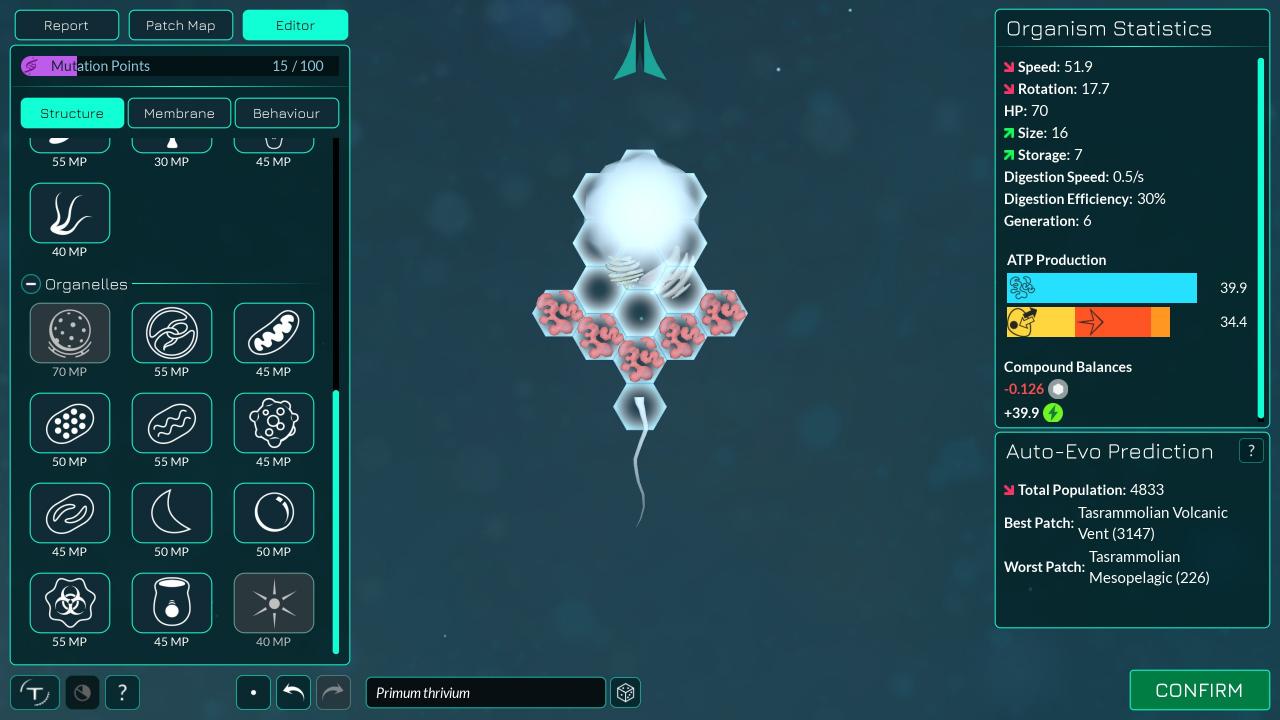 The time has come. Replace your cytoplasm with the glucose muncher above it and place your nucleus. You can head to another glucose patch if you want, but we’re so big that we could probably eat most cells now. Your choice.

Life as a Eukaryote

Now we can get to the good stuff. All the -plast parts will help you get some inherent energy generation just from existing, depending on your location. However, those parts are very heavy, and will slow you down quite a lot. If you want to become a predator, plant, sulfur muncher, heat enjoyer, or otherwise, choose now. It will be difficult to choose something else. For this guide, we’re going to be a predator, which require none of the -plasts. Instead, it requires lots of mitochrondria and flegella. 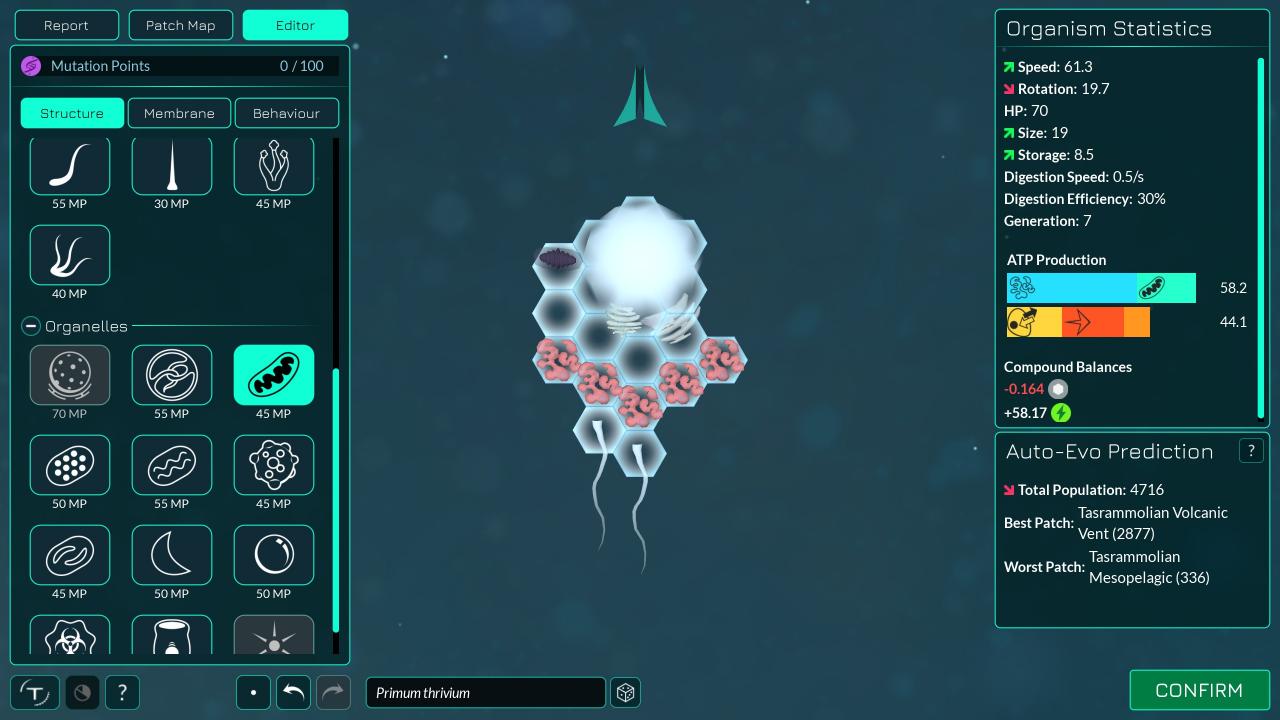 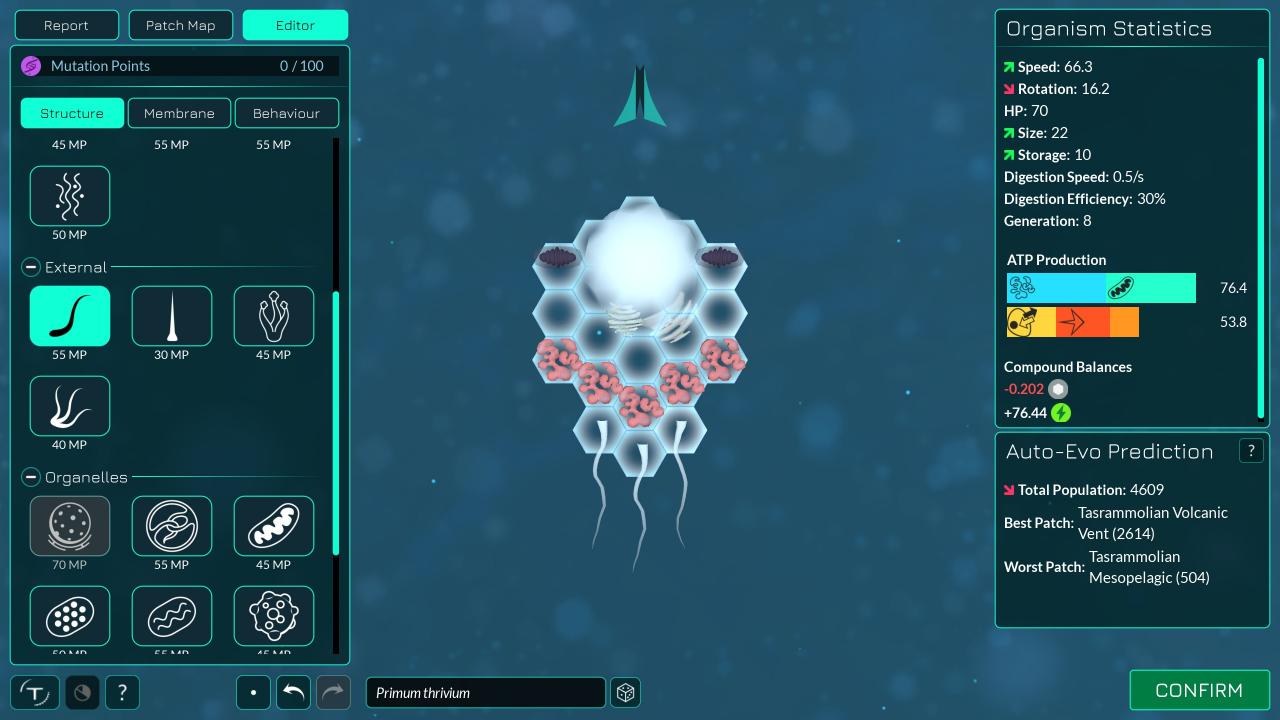 Go ahead and stack up some mitochondria around the nucleus and make some flagella to keep your thrust up. You should also be quite big enough and fast enough to eat prey with ease now, though they might not have enough glucose to support your size. Up to you if you want to hunt prey or go for the glucose-rich areas. 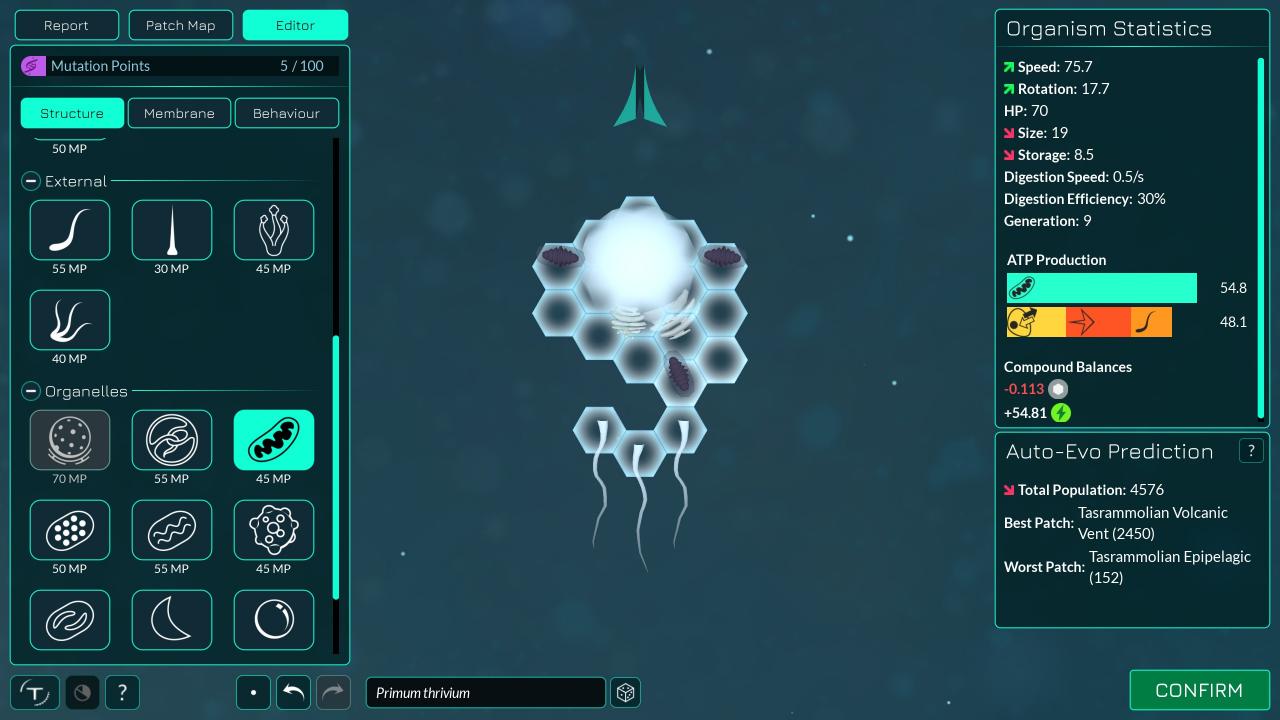 Remove the metabolosomes and add in a mitochondria. This will greatly increase your speed, and reduce your energy drain, allowing you to move around for longer without eating.

It should be rather straightforward from this point. Get mitochrondria to fund your parts, flagella to improve your thrust, and cillia if you need to rotate. Also go to where the prey is strongest. Build some plasts if the glucose drain is getting too annoying, and some vacuoles if you need some more size without adding to the energy drain.

You should also invest in some Lysosomes so the prey can’t just change their membrane to be immune to you.

Thanks to ph0ne (greatijedi) for his great guide, all credit to his effort. you can also read the original guide from Steam Community. enjoy the game.