A complete listing of all British campaigns, the required number of ships and troops for each mission, as well as the relative enemy strength which they will face

NAVAL MISSIONS: The missions are set at sea with no need for troop transports or soldiers. All units assigned should be naval vessels.

GROUND MISSIONS: The missions either begin on land or require disembarking from troop transports, but with no naval opposition. In these missions, the only required units to be assigned are troops transports, although for some missions beginning at sea, it is optional to assign an escort naval vessel, especially if you do not have enough troop transports to fill the required unit slots.

AMPHIBIOUS MISSIONS: These missions require landing troops while there is active naval opposition. Both troop transports and naval vessels need to be assigned. The specific campaign guide (see next section) provides recommendations for the split between naval and troop transports.

The graph below provides specific information for each missions. Missions may be divided into naval missions, ground missions, or amphibious missions (see previous section for the differences). 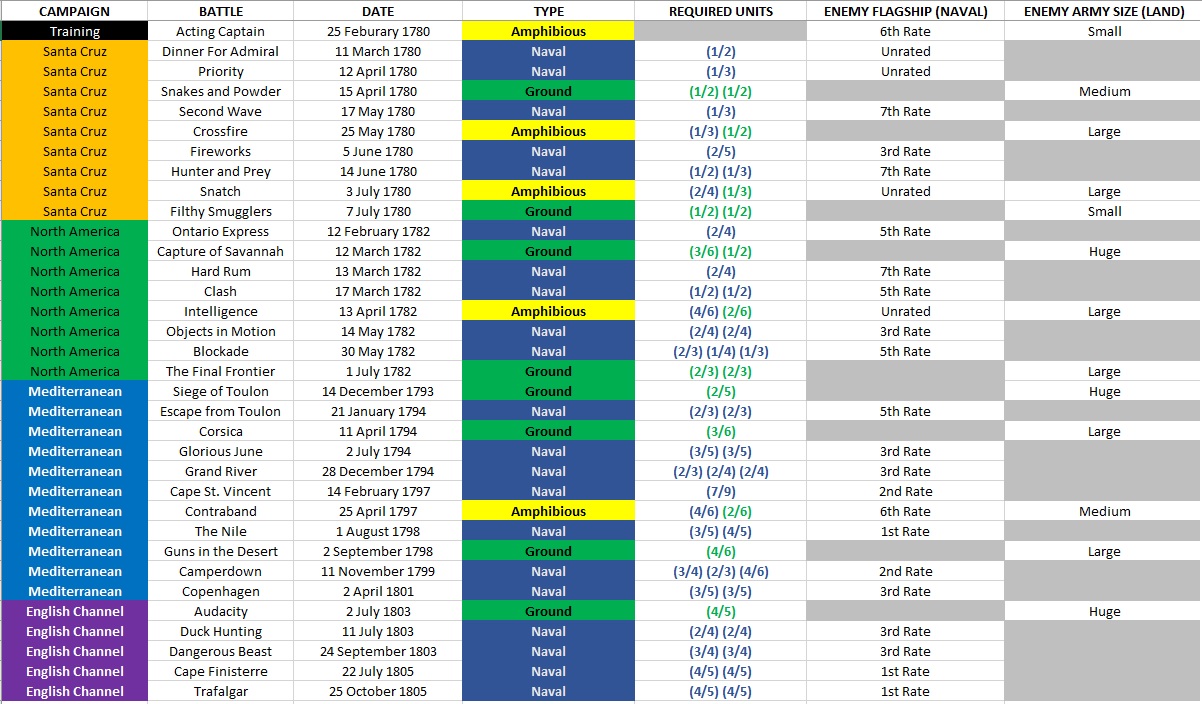 The very first mission is a training missions where the player has already been assigned a ship and ground troops. Further missions require “slots” to be filled with either naval vessels or troop transports.

If more than one group is required, there will be two or more parenthesis number groups. Blue indicates naval vessels while green indicates troops transports. For amphibious missions, the numbers shown are the recommended split between naval and troop vessels.

The game places a great deal of emphasis on funding and money both for purchase and maintenance of ships as well as paying sailors and soldiers, in addition to buying equipment and weapons. For this reason, a balance needs to be maintained as to how many ships and soldiers a player has at one time. 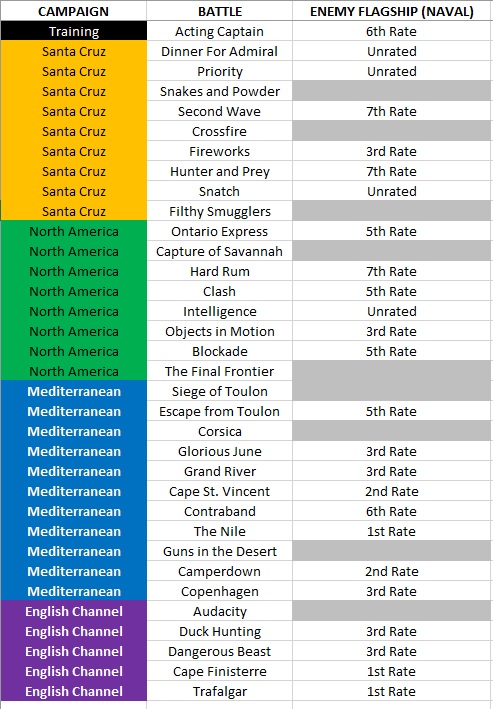 The guide to the right provides information about the strongest enemy vessel a player will face in any given mission. Up until the 16th mission “Objects in Motion”, the player’s fleet will usually consist of nothing greater than 5th rate vessels (although it is possible to capture a 3rd rate, with much difficulty, earlier in the game). “Objects in Motion” will pit the player against a vastly superior 3rd rate ship, which is not required to be sunk or destroyed, leaving retreat as the best option.

The 22nd mission “Glorious June” is the first major battle involving 3rd rate ships and after this the player will also be gifted vessels by the British government such as the HMS Victory, Minotaur, and the Britannia. This is the point at which most players start losing money.

To keep the money loss at a minimum, players should avoid extremely large fleets with unnecessary numbers of vessels. Also try and sell lesser rated ships in favor of a fleet of 1st, 2nd, and 3rd rates.

The 28th mission “Camperdown” has enough slots for 13 vessels. After this mission, the maximum number of ships which may be assigned to any naval mission is ten. Lesser rated or unneeded naval vessels may be stripped of their crews and weapons and sold.

By the 12th mission “Capture of Savannah” the player should have a large and properly equipped Army. This includes researching all technologies allowing for both sharpshooters and artillery. (See chart for relative enemy army sizes for each mission) 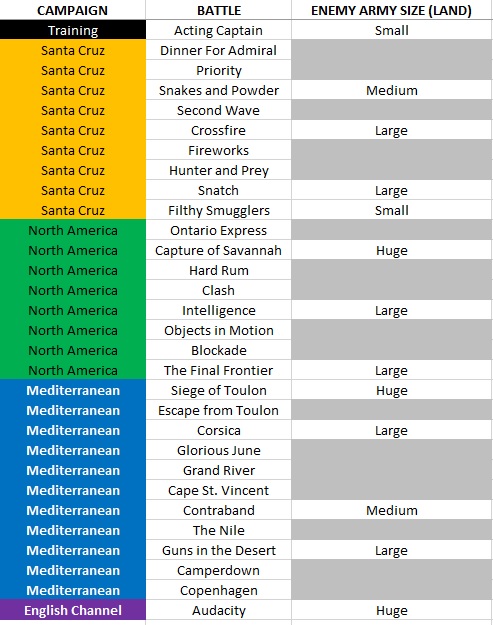 The Savannah battle requires at least four troop transports of soldiers, with additional space for as many as eight. It is recommended the player focus on acquiring the larger four slot merchant ships since each one of these places four regiments of soldiers in each troop ship slot. In this way, it is possible to field a massive army at Savannah, helpful since this is one of the more difficult ground missions.

After Savannah the player should maintain a healthy army of five to six troop transports for use at Touloun followed by an excursion to Egypt in the mission “Guns in the Desert”. After Egypt, the final large land battle in the game is the 30th mission “Audacity” which only allows for five troop transport slots. Audacity is a difficult mission, so each troop transport slot should be full of regiments at their maximum strength accompanied by sharpshooters and artillery.

After the Audacity mission, there are no further land battles meaning all troops may be discharged and their transports sold or turned into fireships (see next section).

Some final thoughts to gain maximum strength from your ships and troops.

* Crew the ship’s officers with the highest ranks possible. Although it may be tempting to have a mixture of junior and senior officers for more realism, a ship full of senior offices brings maximum efficiency and deadly firepower in combat.

* Recruit the more senior ranked Army officers when possible. They bring more morale and efficiency to the unit and there are also not enough ground missions for Officer Cadets to be promoted into the higher ranks, but a Captain or Major may stand a chance at making Colonel by the game’s end.

* For ship upgrades, double shot, double charge, and white powder are extremely devastating to the enemy in combat. All vessels, when possible, should be equipped with carriages to lighten the weight of guns in order to bring more heavier cannons onboard. Sail and hull repair kits are overrated upgrades, but it doesn’t hurt to equip one or two ships with these just in case.

* Don’t bother fielding a mortar regiment, instead jump straight to artillery. Having two or three artillery regiments with 6 or 8 pound cannons can be devastating to the enemy in combat. You will also only ever need one supply wagon. Fill the wagon with the maximum amount of supplies and troops then keep it away from the enemy during battles so it may resupply soldiers running low on ammunition.

* Upgrade ground troop weapons to the best available, including bayonet and sword when possible. Ship crews don’t need as good a mixture of weapons, unless you have a dedicated boarding ship with the upgrades for boarding parties. In that case, arm the crew with the best rifles along with swords and bayonets.

* Consider outfitting the larger troop transports with older and lighter model guns for self defense. All troop transports should be upgraded regardless with hammocks or light hulls to carry more troops. Older and unneeded transports, instead of selling them, may be converted to fireships by adding the explosive bomb upgrade. Make sure to offload all troops into the reserves first!

Thanks to Endicott for his great guide, all credit to his effort. you can also read the original guide from Steam Community. enjoy the game.

Here is a list of all the exclusive skins available through promo codes. Since the announcement of Halo Infinite, 343 have introduced a...

I have noticed many people having issues getting voice chat to work, or even realize its in game. This guide is intended to help you solve...

Farming Simulator 22: Build-in Cheats Guide (How to Use & Console Commands)

Get money, fill your vehicle with anything, spawn bales and pallets, change time, teleport, run faster than any car - all directly in game...