Vamps For The Memories: 100% Achievement Guide

Welcome! This guide was made using the following options:
* Novel mode: OFF
* Hint mode: OFF
* Random Encounters: Normal

Search the barrel near the trees to get a Rat Coin.
Go inside the house, then left for a Magic Water and a Potion.
Search any barrel, keep searching until you get the text “Stop It Pat”:

Stop it Pat
Stop it.

Talk with the lone orc.
Talk with the two orcs, move up to bypass them.
Now get ready to fight the first boss, Grave Roberts.

He’ll drop the Forest Key.
Move to Kingfiller Cave.
Talk with the man until Axle says not to anymore.

Move to Downtown Flussblut.
Talk to the woman in red dress to get:

No Time for Side Quests
She can get her own damn sheep.

Go up to the twin golems and talk to right one to get Deathaway and Focus Powder.
Go to the inn and talk to the Innkeeper, select More Cookies.
After resting, keep asking for cookies to get:

Cookie Queen and Biscuit Knight
You exhausted the generousity of a kind man.

Go to the bar and talk to the woman, choose the second option. You’ll get the Warehouse Key.
Go out to the World Map, the Warehouse is north of the Castle.
Search any box until you get a Crucifix. Search again, and you’ll get:

From Auctioneer to Zither
Found the overly long R.E.M. riff!

Kill all the rats. Move to the next section. Kill more rats. Move again.
Search the chest for a Rat Whistle.
First puzzle, stay on this tile and play the Rat Whistle: 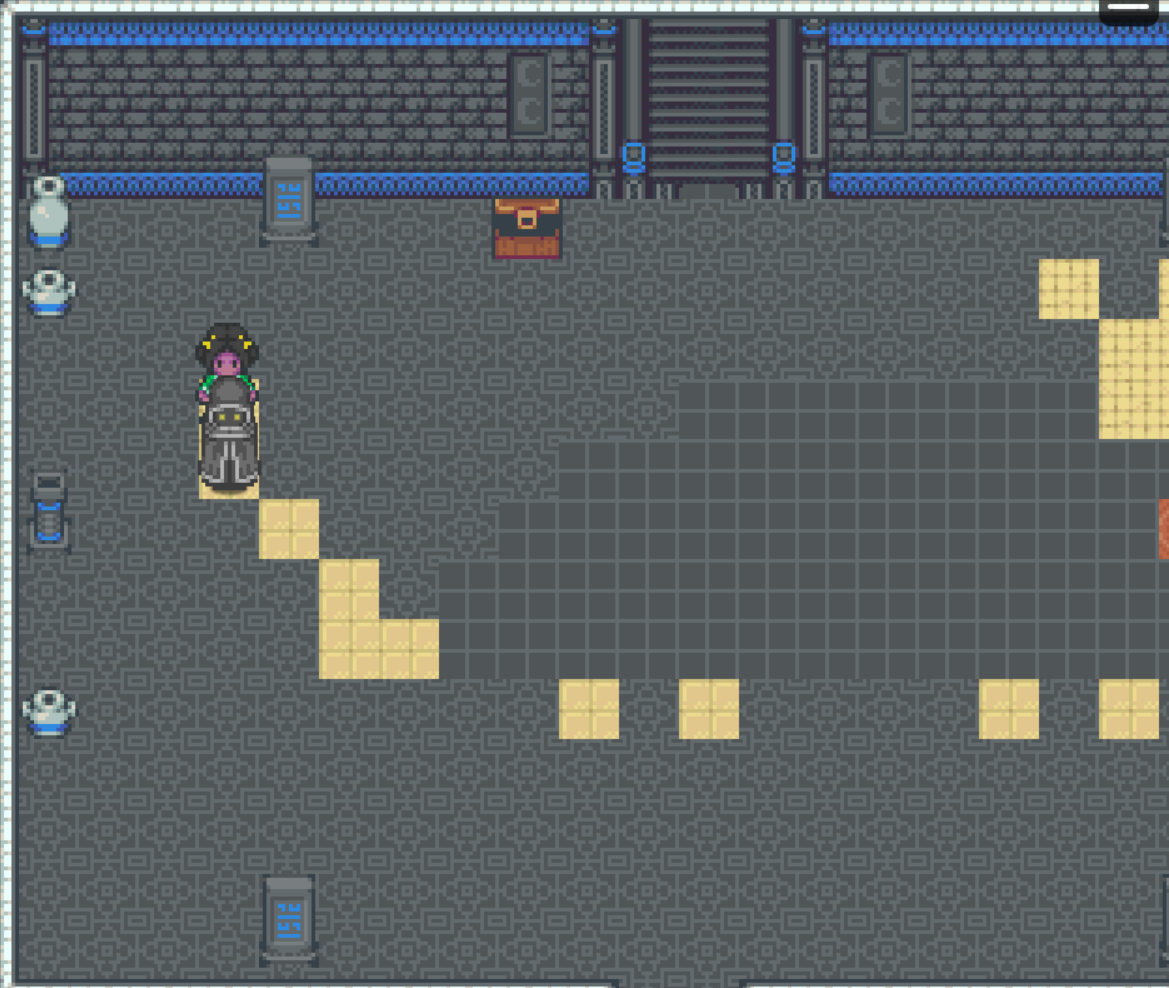 Search the chest for a Compass. Next room, there’ll be two more Compasses.
Second puzzle, move the crystals like this: 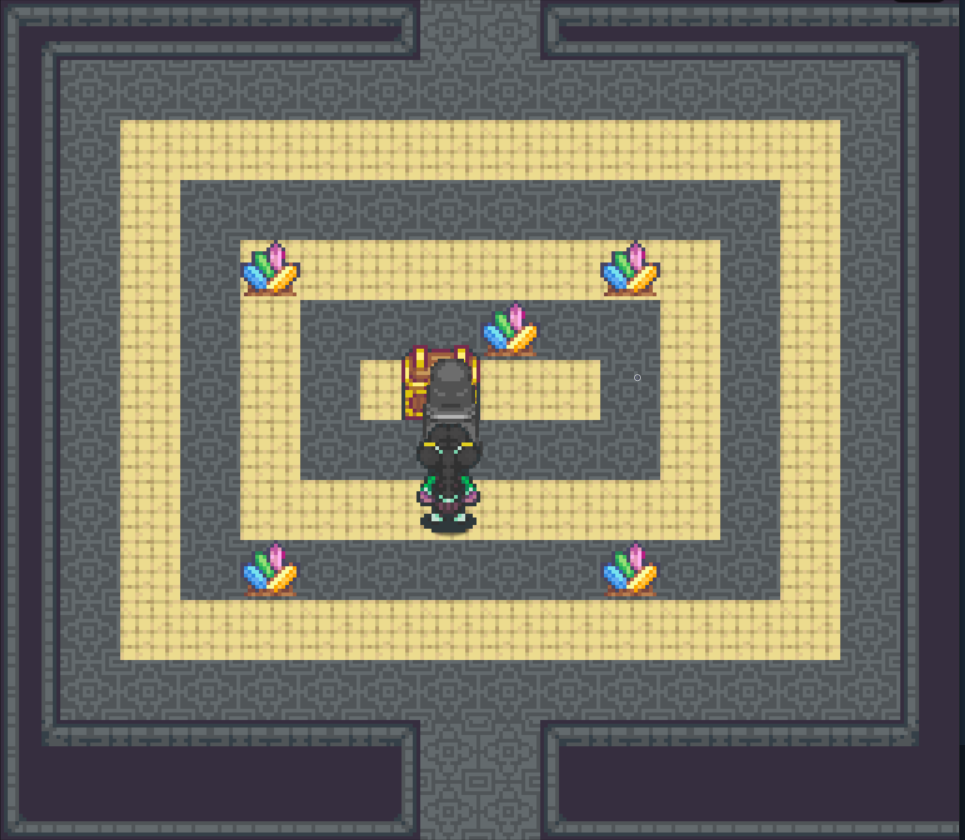 Search the chest for another Compass.
Next screen, there’ll be a scene. After that, kill all the rats and get the four chests with more Compasses and the achievement:

Next screen is a very straight-forward maze. After six battles, you’ll get in a fight with all the rats. Win and you’ll get:

Beat the Rat Ball
Once again teamwork has failed.

Third puzzle, move all switches to the right.
Next scene, third boss battle. Check the chest for your upgrade.
Check the switch to open the door to the left. Go down.
Move up and open the chests, then talk to the Rat King, fight him and get:

You’ll lose the Rat Coins and gain the Rat Crown.
After that, you’ll be outside. Check the box for Motivational Cards.

Go back to the town and talk to the woman in the bar. You’ll lose all the rat tails and gain the Hunter Certification, a Loxodon Statue, and some jellybeans.
You’ll automatically exchange the Loxodon Statue for a Sea Shell.
Before starting this trading quest, go talk to the Jester and win his minigame for:

Don’t Blink!
You beat the best at less eye rest!

Dragoff
You found the optional boss!

– go back to the town and talk to the vendor north of the bar to exchange our Carrot for a Chic Luggage Set. Talk to him again for:

Foodie
I don’t trust that Mr. Sousa but he made a damn fine pork loin in the day.

– talk to the wannabe couple of vampires to exchange our Luggage for Capes.
– go to the Inn and talk to the man right near the entrance to exchange our Motivational Cards for a Box-B-Gone.
While we’re here, stay at the Inn until Cellean goes on about some crows and chipmunks and you’ll get:

Deep Lore
Sometimes DMs go overboard with world building. This is the result.

Now, go to the Store and use the Box-B-Gone (you won’t be able to buy items anymore).

Go down to the Basement and talk to the skeleton.
Go to the World Map and try entering the Castle.
Once here, check all the graveyards for:

Once inside, talk to the vampire next to the door. Ask to see the master.
You’ll have to answer three questions:
– Who is strong?: Dramual
– Who is wise?: Tothal
– Who is a hunter?: Q’Rok

After the quiz, you’ll get the Letter of Recommendation.
Go back to the town and down the Basement. Give the skeleton his Letter.
Now, fight all the skeletons. Check the brown chest in the table for a Focus Powder.
SAVE. Rest at the bed and you’ll get a Game Over, but also:

DEATH BED
Image unrelated. But what a way to go!

Load the game. This time, fight the red enemy. Then the blue one.
After that, go up to the box in the wall to get the Moroi Seal.
Go back to the castle.

Go right and talk to the monsters until you get:

It’s just “Harold”
Discovered a terrible cult forever battling in a schism of long-form versus short-form.

Before talking to the vampire, SAVE. Now’s a good time get achievements if you didn’t get them before.
Agree to meet his master, then you’ll be in a fight.
Take the chests for Full Potions.
Make your way to the Vampire Master.
After some scenes, you’ll be in a boss fight.

SAVE. Check the chest. Then use the Dragon Skull to exchange it for a Matchstick.
Go to the Demon Rat when you’re ready.
Final boss time! Use the Matchstick before anything else to get:

crack!
Incredible power from ancient Inosculana. A deal with a mad hag. You stepped in deep lore you did.

Beat the Aspect of Rat
Godkillers!

All Hands Towards One Purpose
A winner is you!

During the course of the game, you will get various topics to chat during battle. These topics are a great way to restore HP, MP and TP.

After every boss fight, your characters will remember stories from their past and you’ll get to choose between two skills. This is the only way your characters can learn skills, so choose wisely.

Ball of Rats:
– For Cellean Paperbark:

Thanks to Kotsure for his great guide, all credit to his effort. you can also read the original guide from Steam Community. enjoy the game.