Tips and tricks to survive a minute in the Super Gravitron, while playing normally. 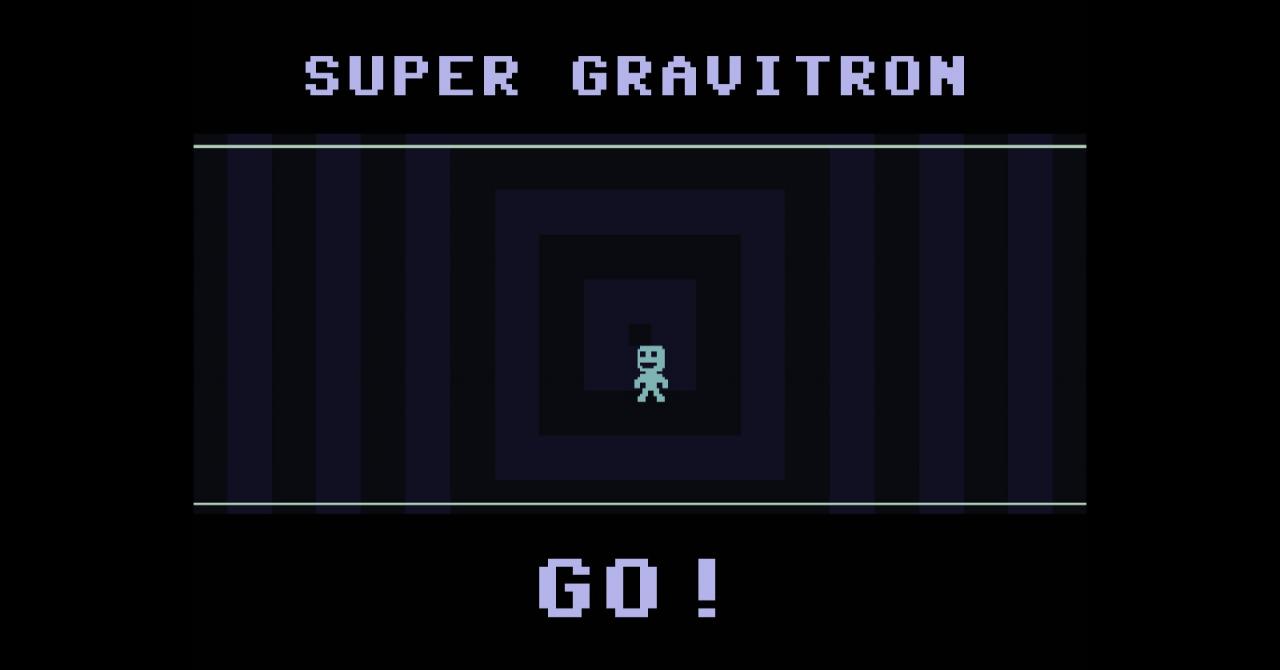 The Super Gravitron is tough as hell. It throws an endless series of blocks at you in various patterns, and the slightest touch will kill you and force you to start all over again. At first it seems totally un-doable, and even surviving for the 15 seconds of the third achievement feels impossible, let alone a full minute. Let’s look at how to make it possible.

Anticipation
At first you won’t even be looking at them, but as you get better, keep half an eye on the triangles that show up at the side of the screen. These will tell you which blocks are coming up next, at which height, and as you learn the patterns you’ll be able to know exactly what pattern is coming next and position yourself accordingly.

Patterns
There are seven different patterns the Super Gravitron will throw at you, some of them more difficult to survive than others:
-Single Blocks from One Side (usually seven blocks, in a random pattern)
-Singles from Both Sides (usually six pairs in a set pattern, sometimes ten in a random pattern)
-Triple Walls (always three sets of two blocks)
-Walls from Both Sides (always one set of two from each side)
-Diamond
-Diagonal Wall (always open from the bottom)
-Up-Down Walls (always six sets, alternating between up and down)

These can come in very quick succession, and sometimes the patterns will come at you in a way you can’t possibly escape (two diagonal walls in a row, from opposite sides, argh!). Most of the time they can be safely navigated if you keep a cool head. We’ll go into more detail on each pattern in the next section, for now just keep in mind that this is (almost) everything the Super Gravitron will do. (Sometimes it’ll toss in a random single somewhere to throw off your timing, but this is rare.)

Randomness
Which pattern will come out next is always random, but it’s important to keep in mind that internally, the patterns aren’t very random. Single Blocks from One Side has random heights but set spacings, while most of the other patterns have little or no randomness. Even the Singles from Both Sides pattern, which can feel impossibly random, is a set pattern most of the time. Again, more details in the next section, just be assured that it is possible to learn enough of each pattern to get through it almost every time.

Speed
At max speed, you are slightly slower than the speed of the blocks moving across the screen. This means two things. First, you will never accidentally catch up to a block that’s passed you. It’s completely safe to chase those at top speed. Second, blocks close behind you will eventually catch up, which means you have to deal with them, usually within two or three bounces depending on how close they are. You’ll get a feel for this with practice, especially as you get used to screenwrapping.

Screenwrapping
It’s easy to forget, but just like the regular Gravitron, in the Super Gravitron you can move between the edges of the screen, wrapping from left to right and vice versa. The blocks coming at you can’t screenwrap, and will disappear as they cross the edge of the screen. This makes screenwrapping one of your best defensive moves. The danger is that you might cross over into a spawning block, or a block that hasn’t disappeared yet, but that chance might be better than being trapped in a dangerous pattern. And there are times when you can be guaranteed of a safe getaway. Basically, don’t be afraid to run away if necessary. 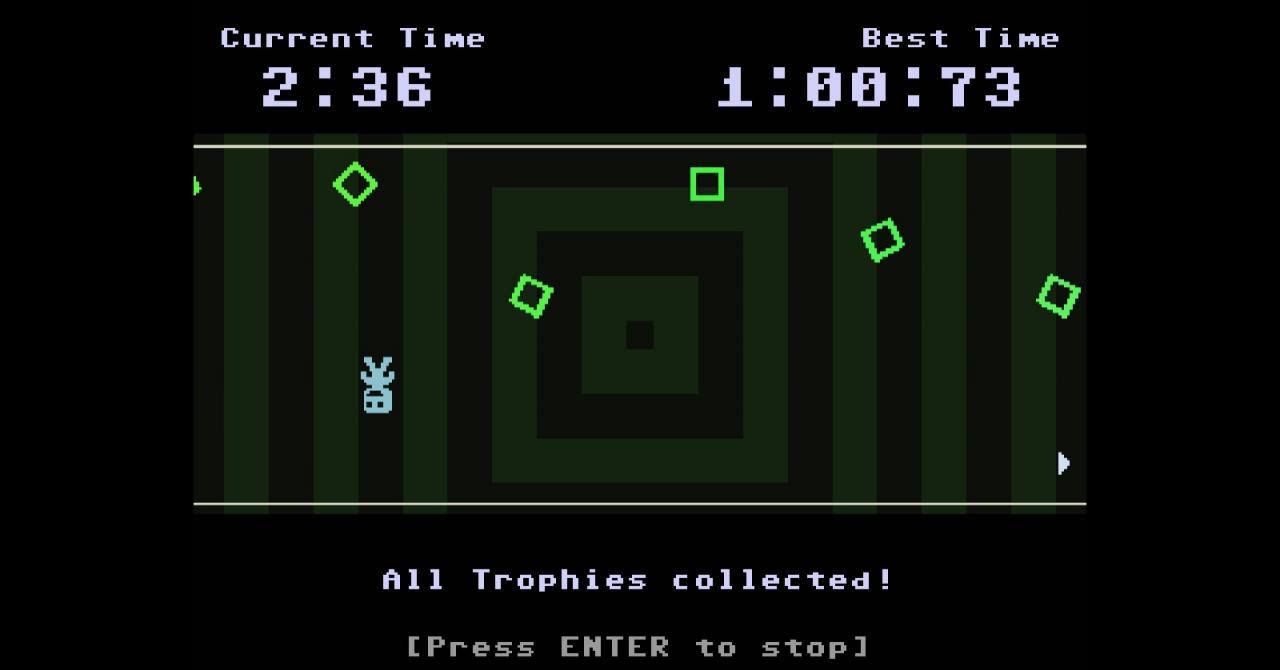 Single Blocks from One Side

The most basic pattern, the one you’ll see most often. Seven blocks of random height, always at the same distance length-wise. This pattern isn’t especially fast or dangerous, and has a very safe way of escape.

Get in between the second and third block, and screenwrap. That’s it! That’s all you have to do. You are almost always safe doing this, unless you get caught by a random single on the other end.

Note that if there are two of these patterns in a row, it can be dangerous to do it a second time. It’s often the case that there’s a random single in between the two sets of seven, and even if there isn’t, you can lose track of where you are. In that case, it may be better to simply try to evade the next seven without screenwrapping.

Keep in mind that you don’t have to screenwrap. If trying to get in between the second and third block is going to put you in a dangerous situation, you can bail on the screenwrapping and just evade normally. 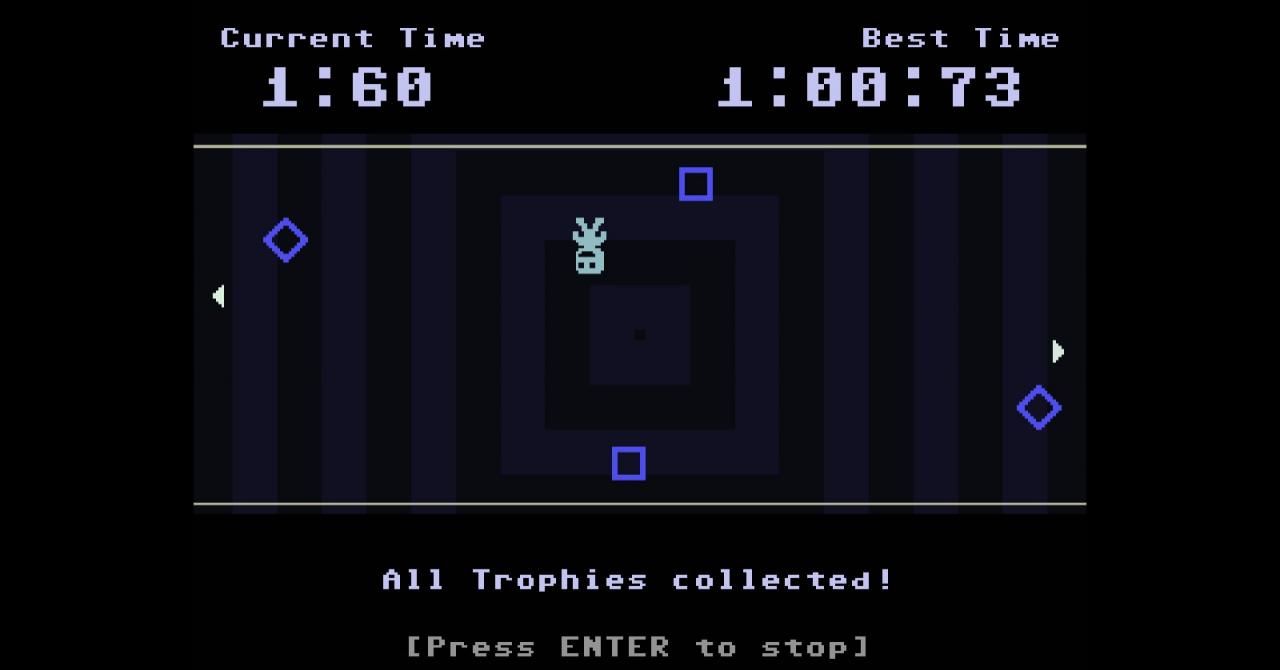 Singles from Both Sides

It’s tricky, especially because you will hit different places of the pattern depending on where you are in your bounce when it starts, but it’s possible to get the hang of this set pattern well enough that you can easily anticipate the next blocks and get around where they’re going to be. As you get more practiced, you can hover around near the middle and barely move to just exactly hit the right spot in each pair to survive. Or swing wildly around dodging everything, whatever works.

What about the 25% of the time this is random? Yeah, it sucks, especially since the random pattern is usually ten blocks from each side (sometimes it’s six, count your blessings). The only upside here is that the randomness is between the same pairings as the set pattern (1 left / 6 right, 2 left / 5 right, etc), it’s just that the pairings get fired off at random. So you don’t have totally random blocks flying around all over the place, though it’s still very hard to anticipate. Keep in mind that you can avoid 2/5 blocks by going above or below them respectively. Keep your eye on what’s coming next, try to stay loose, and hope for the best.

The 25% pattern killed multiple runs of nearly a minute for me. Awful. 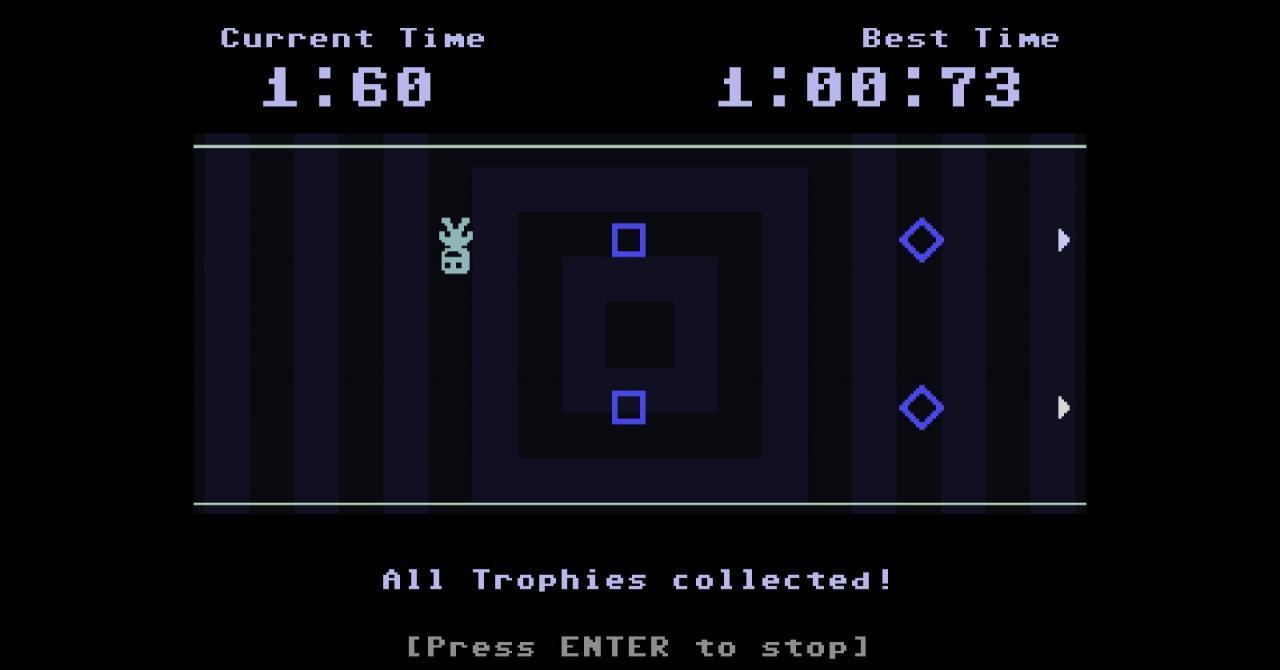 Three walls of two blocks, random pairs of heights but always at the same distance. Like the Singles from Both Sides patterns, the pairs of heights for each wall are 1/6, 2/5, and 3/4. You can pass between 1/6 pairs, and go above or below 3/4 pairs. 2/5 you can do either, but going above or below is highly recommended, the timing is much easier than going through.

However! Just like the Single Blocks from One Side pattern, there’s a very simple screenwrap escape. In this case, it’s even easier. Position yourself at about 3/4 the same distance from the first wall as the walls are from each other, and screenwrap. No need to actually pass any of them.

Note that if you think you’re a little too far, it’s always better to slow down a bit and be too close. Too far means hitting the third wall as it spawns and dying, too close just means a little bit less time to adjust to the next pattern. You can usually survive even if you’re right up against the first wall as you screenwrap. 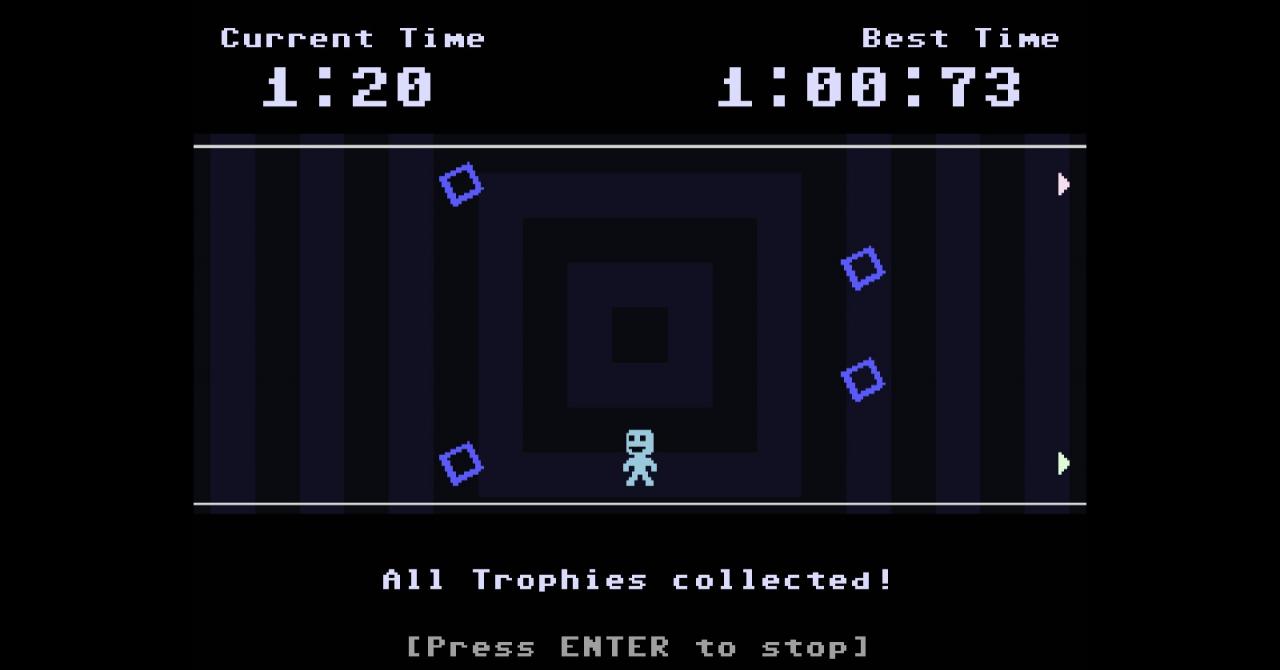 Walls from Both Sides

Two walls of two blocks, similar to the Triple Walls pattern except it’s coming at you from both sides. There is no randomness at all here. The left wall is always 1/6 and the right wall is always that ~2.5/4.5 position. (As far as I can tell, these are the only blocks that don’t conform to the standard 1-6 positioning.)

Only one way to escape this pattern. Go through the middle of the left wall, and above or below the right wall, in either order. As you get better at this and get the muscle memory of it you can pass both in the same movement. This starts off difficult but will become easy since the pattern never changes at all. Eventually you’ll swing through two of these in a row without breaking a sweat.

Try to keep an eye on what’s coming next and do the wall that’s furthest from the next pattern first, so you don’t trap yourself. 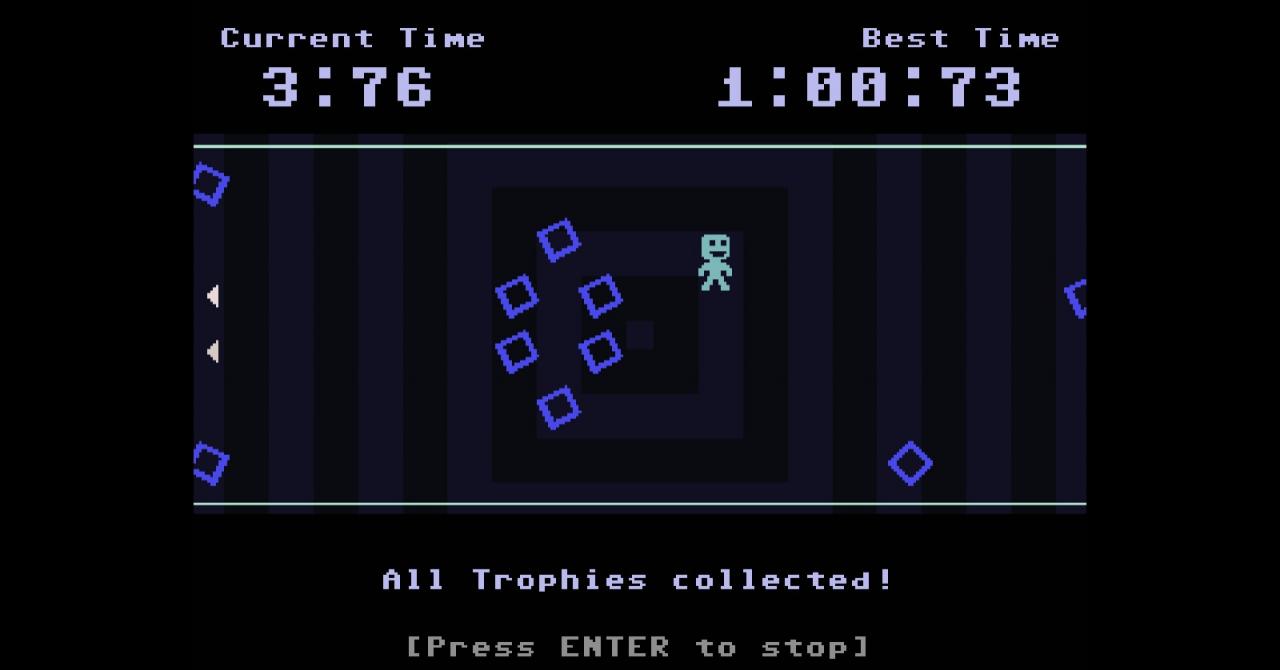 Like the Walls from Both Sides pattern, this is always the same. Single blocks at 2/5, and two blocks at 3 & 4, making up a diamond.

Unlike Walls from Both Sides, you do have the option of escaping via screenwrap, but this pattern is so short and the next will come so quickly that it’s not usually worth it. Swing above or below the diamond and get ready for the next one.

If you’re near the side of the screen because you just screenwrapped, you’ll eventually get the hang of going above or below a diamond right as it spawns onto the screen. You don’t have to do this but it gives you more time to act on whatever comes next. 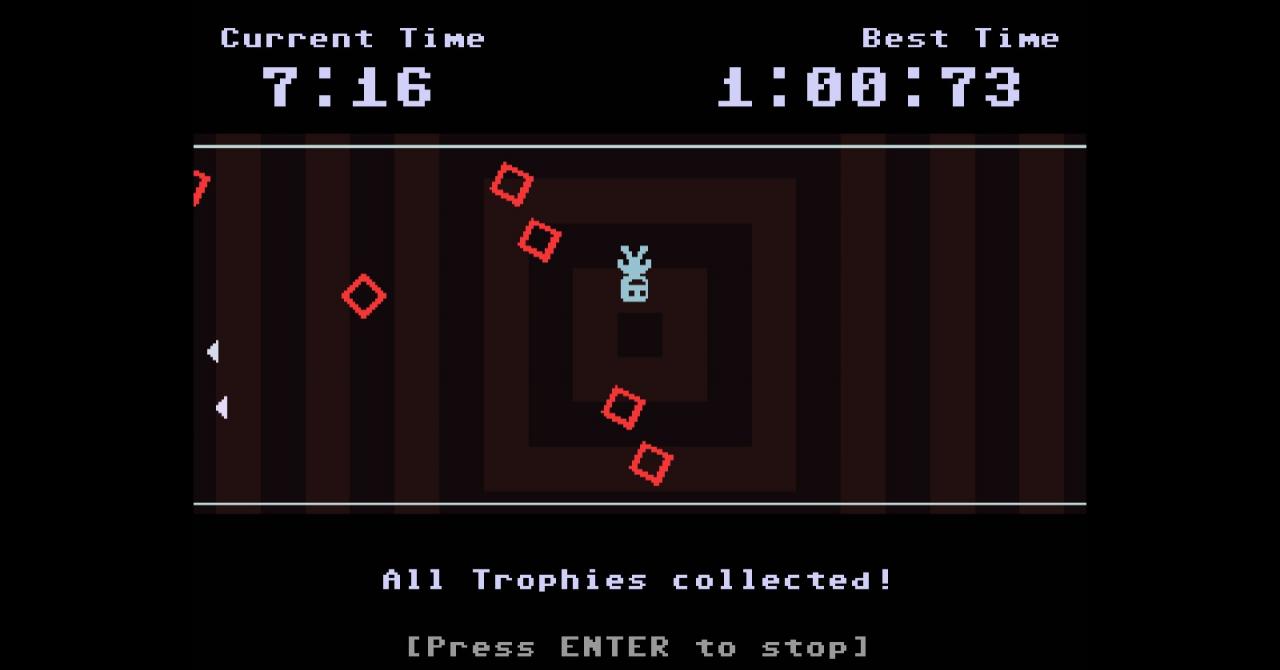 These walls are made up of blocks at 1, 2, 5, and 6, with empty space at 3 and 4. They can come from either left or right, but either way they’re tilted just enough, and in the right direction such that you can only pass through from the bottom.

That means you only have half the opportunities to go through them. As with the Diamond pattern, you’ll eventually get the hang of going through them just as they spawn onto the screen, but here that’s critical. You must go through these as quickly as you possibly can, or you’re likely to get trapped.

If you recognize that it will take too long to get through one of these, you may want to just retreat and screenwrap, though that will likely take you into another pattern. Either way, act fast! 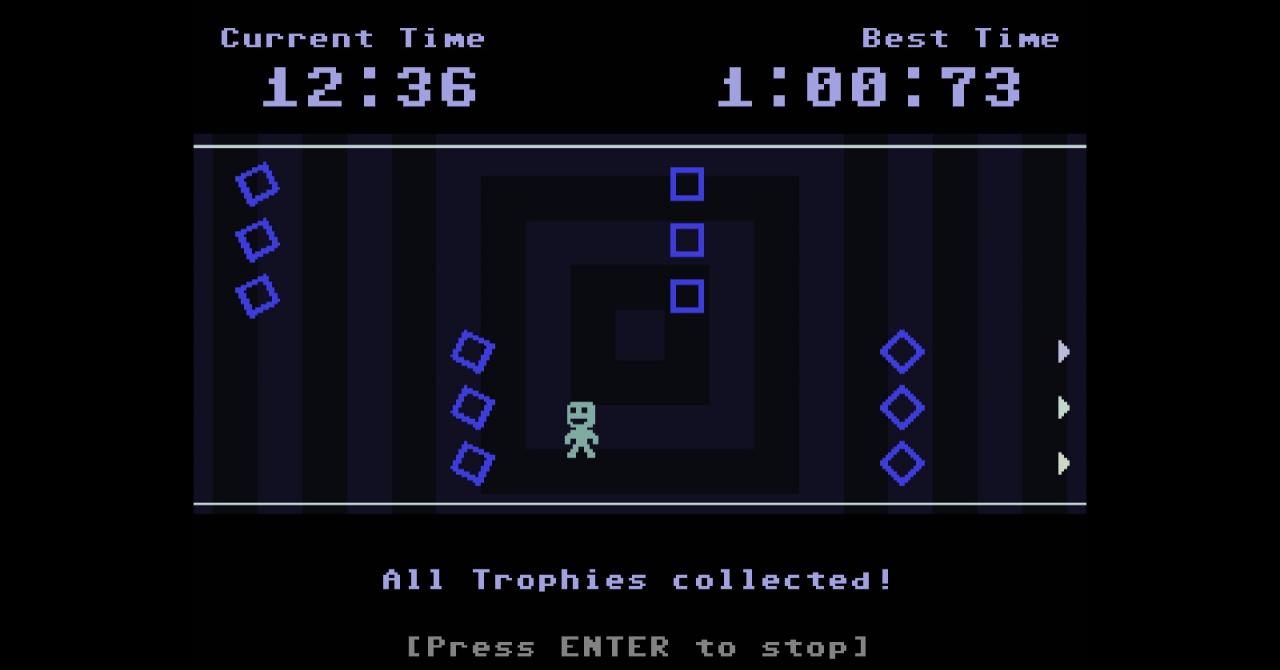 Hallelujah! This pattern is your best friend. A set of six walls of three (1/2/3 and 4/5/6), alternating between up and down.

You can avoid the whole pattern easily by getting in between the second and third wall and then screenwrapping. Or you can just ride it out, it’s not hard to stay in between the walls.

Either way, enjoy the reprieve–the next pattern won’t spawn until this one is almost fully off the screen, making this the pattern with the longest downtime. Not only is it super easy to get through, it gives you a break! Sadly it’s also the rarest pattern, so enjoy it while it lasts. 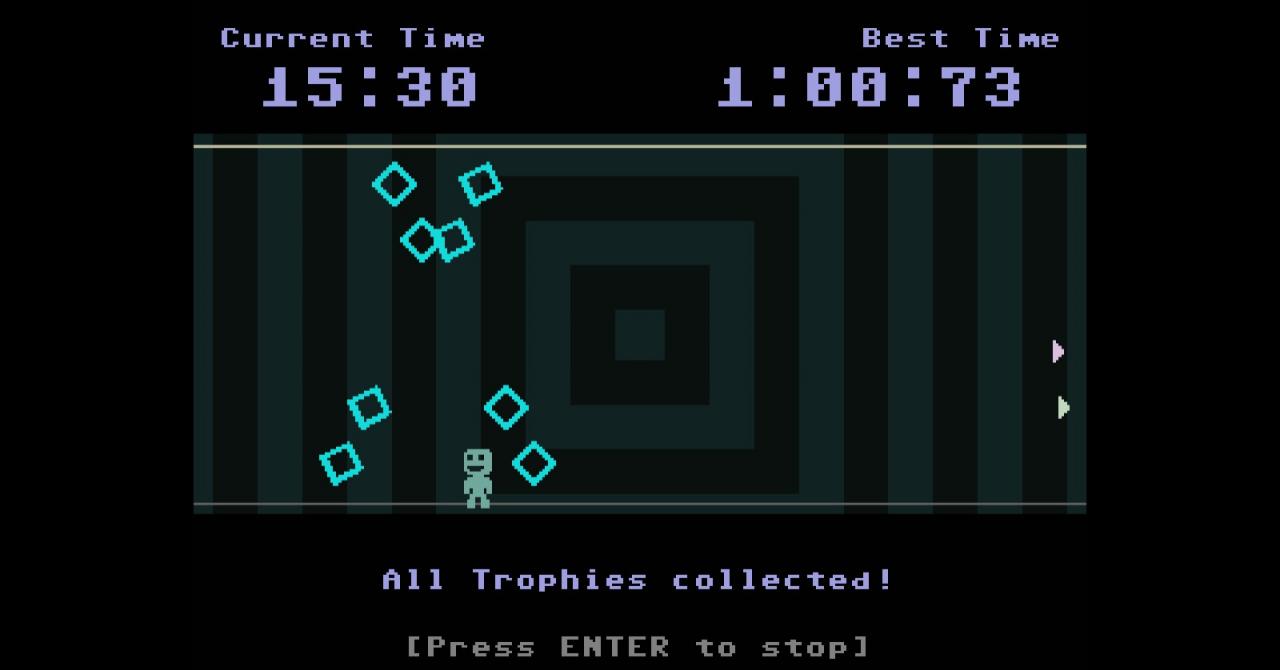 Even knowing how every pattern works, even with a plan, even with a lot of practice, this is still difficult. Keep at it, keep practicing, don’t get too down over bad pattern luck, and if you get frustrated, take a break and try again another day.

I promise that it’s possible to do this.

This guide contains the mine, the headquarters, the power plant and town perks. which will help you to start the game.   THE...