Bombs? Yes! And wands, and rockets, and clouds of icicles and flying eagles!

Weapon Basics
All weapons can be upgraded a few times, but the upgrade paths are always the same.

Wands
All wands use Wand mana, which regenerates naturally over time, even when your wand isn’t equipped. On the downside, they’re weaker and slower than other weapon categories.

Spirit Branch
Damage Type: Basic
Primary – 8 Mana – Shoots a chunky projectile
Secondary – 8+8+8 Mana – Shoots a burst of chunky spheres, likely to push enemies back.
Passive: +5% Damage
Special: ???
Notes: Feels like it should be stronger for how much it pushes baddies back. Without perks, it’s just too hungry too shoot for long before it starts stalling. Very meh, in my taste. 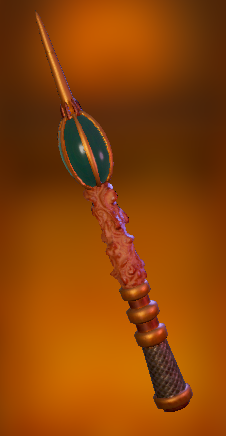 Swiftspike
Damage Type: Basic
Primary – 5 Mana – Shoots three quick shots; can be held for automatic fire.
Secondary – 13 Mana – Shoot an Explosive Sphere; does damage in small AoE and on contact.
Passive: +5% Movement Speed
Special: ???
Notes: A rather solid combo. You get a rapid fire weapon for quickly dealing a little damage and a good explosion for groups. It’s just a nice wand. What is there to say?

Spells (or Books)
BTW, the books look different open. Not just that, but the writing inside? Different handwriting, script, different glyphs and different parts lit up. There’s a lot of love in the Spellbooks. APPRECIATE IT >:I 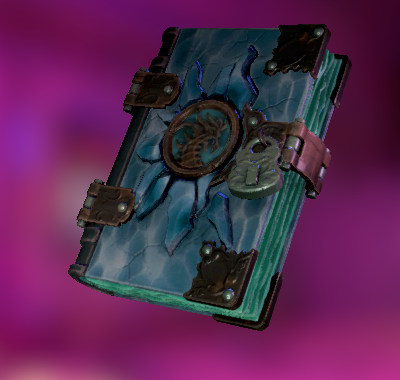 Chill Splinters
Damage Type: Ice
Primary – 3 Mana – Shoots a bunch of arcing projectiles in a wide fan, can inflict freeze.
Secondary – 8 Mana – Charges up and shoots a big arcing Cluster Bomb that, on impact, explodes into about 12 smaller, arcing projectiles.
Passive: ???
Special: ???
Notes: A Shotgun with a weird secondary. I don’t like the Secondary. It has great damage potential, but it takes great skill (or luck) to get that potential out of it, since it’s reliant on a lot of projectiles hitting. The real selling point is that its primary fire can inflict Freeze quite reliably. 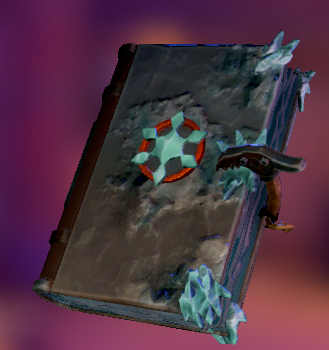 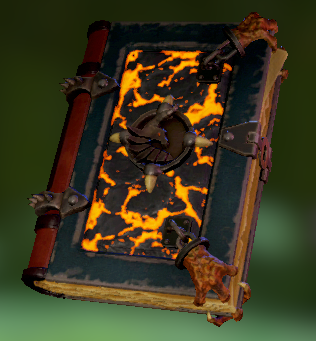 Hellish Ember
Damage Type: Fire
Primary – 3 Mana – Shoot a spray of about 4 fire projectiles in a tight cone.
Secondary – 1×10 Mana – Charges up and sprays, very inaccurately, a bunch of tiny fire projectiles.
Passive: +10% Fire Damage
Special: ???
Notes: The primary fire is alright, but the secondary is useless. It shots a rapid spray, but it’s so hilariously inaccurate and weak it makes the Doom 3 Shotgun look good. And that’s a low blow. 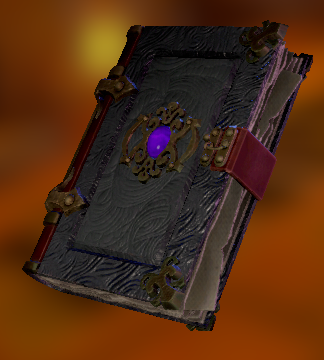 Lich Breath
Damage Type: Cursed
Primary – 3 Mana – Shoots a floating sphere that pierces enemies that does moderate damage.
Secondary – 6 Mana – Charges up and shoots an Explosive Attack. Does similar damage as its normal shot, but hits a decent AoE.
Passive: +10% Status Effect Duration on enemies
Special: ???
Notes: Quite powerful. The primary fire has a good rate of fire for how much damage it does. It is quite Mana hungry. Between secondary, primary and raw damage, it’s a good spell for any enemy not resistant to Cursed. 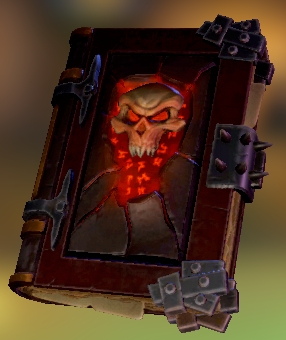 Skull of Xanatos
Damage Type: Fire
Primary – 4 Mana – Shoots a single, homing explosive skull.
Secondary – 7 Mana – First shoot big skull, explode into normal homing skulls.
Passive: Regain some Spell Mana when you pick up Knowledge Crystals
Special: ???
Notes: Eh. Like in the first game, it feels like it’s primary should be way stronger for how slow and meandering it is. Still, it’s just something to get used to. And hey, you get to shoot enemies with themselves. The secondary fire is amazing in spread crowds, as the smaller skulls appear to be homing as well! 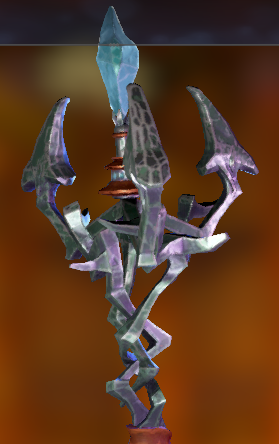 Twin Fangs
Damage Type: Poison
Primary – 1+1 Mana – Shoots two projectiles; one slightly to the left, one slightly to the right of the cursor.
Secondary – 7 Mana – Charges up and shoots two big, arcing poison bombs; one to the right, one to the left.
Passive: ???
Special: ???
Notes: Definitely best used up close or on wide groups. I don’t get the point, but it does what it does well enough. Seriously, it shoots to the left and the right, exactly as the two-circle cursor says! 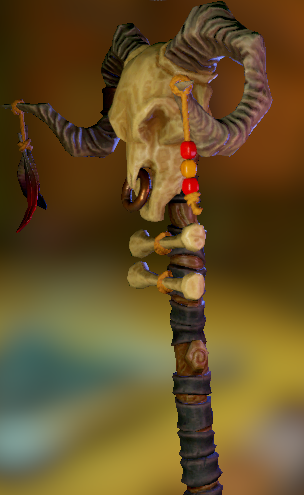 Undead Scepter
Damage Type: Cursed
Primary – 1 Mana – Shoots 5 weak projectiles in a horizontal line that fan slightly. Shoots at a modest speed.
Secondary – 5 Mana – Charges up, then fires a big ball of Cursed energy that pierces enemies and explodes after a bit.
Passive: +10% Cursed damage
Special: ???
Notes: Good for groups. The secondary fire is pretty beefy, but the explosion is hard to place since it does whatever it pleases, bouncing off walls and detonating when it feels like it. The primary fire is good up close, as the line/fan isn’t that wide. 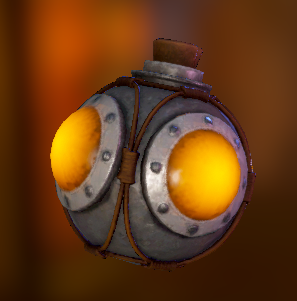 Firestorm Grenade
Damage Type: Fire
Primary – 4 Mana – Throw a single Explosive Grenade.
Secondary – 7 Mana – Throw a single Cluster Grenade, which explodes into 5 Explosive Grenades that spread in a pentagonal fashion
Passive: ???
Special: ???
Notes: It’s a grenade. Get something to negate the friendly fire. It’s not quite as it was in Ziggurat 1, as another weapon has the fire-field function, but you get what you pay for. It’s a decent little work horse; it will not disappoint. The secondary is great for clearing groups.
Both fire modes result in a grenade being thrown that explodes on contact with an enemy or after some time; otherwise it bounces off surfaces and might come back to you! 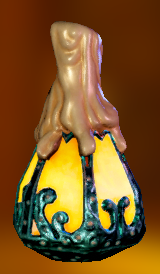 Fireweaver Bomb
Damage Type: Fire
Primary – 4 Mana – Throw a single Fireweaver Bomb that bounces off walls and leaves a puddle of fire on impact.
Secondary – 7 Mana – Throw a Big Firebomb that inflicts damage and the Fire Status Effect ot all enemies in a large area.
Passive: ???
Special: ???
Notes: By far one of the best quick-swap weapons. Swap to, throw out the secondary and swap back. Fire and Ice don’t cancel out, so letting the Fire tick damage can greatly augment your AoE. Consider getting Friendly Fire negating Perks to offset the fact you’re very likely to hurt yourself with these! 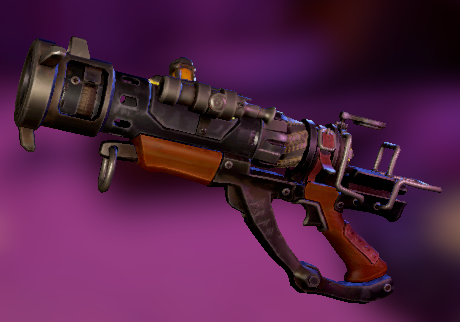 Retribution
Damage Type: Basic
Primary – 4 Mana – Shoot one rocket.
Secondary – 4+4+4 Mana – Shoot a burst of three homing rockets.
Passive: +20% Item Pick Up range
Special: ???
Notes: Big stronk. Good DPS, and the homing is great for duck and cover. By far one of the best raw damage weapons. My personal favorite! Then again, you’d have to be pretty dumb to mess up a rocket launcher. I recommend against using the Primary fire, as it (at least FEELS) slower than just spamming secondary.