A short guide describing basic gameplay for A Token War, including beginner tactics and tips for building a powerful Collection.

This is a short guide to get you started playing A Token War. In this guide we’ll go over:

Check out our gameplay basics video!
A Token war is easy to learn. To begin, gameplay consists of two main phases, the Setup Phase and the Action Phase.
The Setup Phase

During the setup phase, you choose which Tokens you want to bring to battle, and where you want them to start on the game board. You are only required to place your Stronghold (pictured below) before battle can begin, but it’s generally a good idea to place more than that to avoid instant defeat. Here is what your Stronghold looks like at the start. 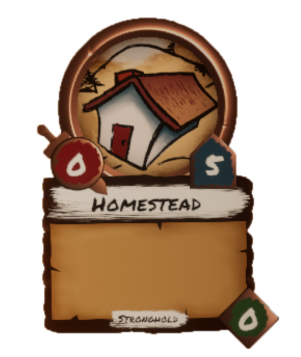 If you’re confused about what to place where, placing your Stronghold first in a central location near your side of the board is a good place to start. Once your Stronghold is placed, take a look at the power rating of the battle, represented by the number of these stanchions at the bottom of the game board. 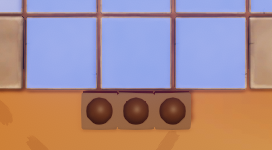 The power rating of a battle limits the Tokens you can place during setup. Each Token has a power level, represented by the material its border is made out of. A Copper border has a power level of 0, Silver is 1, Gold 2 and Diamond 3. As you place Tokens on the battlefield the stanchions below the board will light up to indicate the total power fielded so far. You can only field a combination of Tokens with a total combined power level less than or equal to the number of these stanchions, so just placing all your most powerful Units often isn’t an option.

Since you usually can’t place all your best Units, take a look at the enemy configuration and try to figure out which of your strongest Units and Structures would perform best. The most important aspect of the enemy setup to check out is the Stronghold, often the enemy Stronghold can have effects that could alter the way a given game plays out. Once you’ve placed your strongest Units, try to fill out your setup with Copper bordered Tokens, even adding a single Trainee can be useful down the line.

Once setup is complete, gameplay proceeds in turns, with you (the human) going first. Each turn consists of (usually) 2 Actions. An action is most commonly moving a Token or using a Token to attack an enemy, although some Tokens also have special actions, indicated on the rules panel. The other most common action is casting a Spell. Most battles allow you to bring one or more spells with you , which can be cast once per battle unless otherwise specified or replenished. Spells are quite powerful, and some will consume more than one action when cast.

In general, when you feel as though you have a material advantage in the Action phase, aggressively taking initiative and attacking can be quite successful. Alternatively if you feel as though you are at a disadvantage, waiting and maneuvering around your opponent, looking for an opening might be the best strategy. When in doubt consider isolating the least protected enemy Unit and destroying it without taking heavy losses.

Since general strategy has been covered in the How to Play section, this section will focus on more specific tips and strategies that you might find useful on the road to domination.
Elevation

While it may not be over when someone gets the high ground, having a height advantage can still be pretty useful. In A Token War, elevation works a little differently than you might be used to. Tokens on any type of elevation are given a static buff, alternating between attack and health. What this means is that a Token on the first level of elevation gets +1 Attack, a Token on the second level gets +1 Attack and +1 Health and one on the third level gets +2 Attack and +1 Health, continuing for arbitrary levels of elevation. What this means is that all Tokens battling on the high ground are more dangerous. Because of this, placing your Stronghold on the high ground may be dangerous, since enemy Units that make it up to the same elevation will be stronger, but your defenders will have a significant advantage which may prevent them from getting up there in the first place. In general, looking to control the high ground at key locations on the battlefield (near either Stronghold or the center) is always a good idea. Also, since high ground can provide a constant health buff, it is possible to have Unit that will be destroyed if it moves off the high ground, sort of like being really tired and falling off a cliff. It’s also important to note when you are placing Structures or your Stronghold next to high ground, since attacks from those locations are more impactful.

One of the most important tactics to employ in battle is flanking. Flanking allows you to use multiple Units (or Structures with an Attack value) to take down larger foes. When a Token is surrounded by two or more tokens an attack by one of those Tokens will add the Attack Power of every valid surrounding Token to the attack.

To surround a Token, you need to be able to draw a line between two friendly Tokens which passes through an enemy Token. The image below is an example where the Scout and the Wizard have the enemy Archer surrounded and therefore an Attack by one of them would be a flank attack. 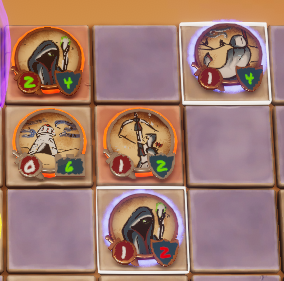 Here is a scenario that would not be considered surrounding since a line between the Scout and Wizard doesn’t pass through the Archer. 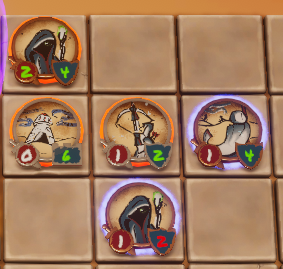 If you are facing down a Unit that seems too strong, you can try to play more patiently and bait them into being surrounded by multiple Tokens for an extremely powerful attack. Conversely be careful about potential flanks by the enemy as well.

Building a powerful and cohesive collection is perhaps the most important aspect of A Token War. With many different Tokens, Upgrades and strategies it can be daunting to figure out what new recruits to take on. The most important thing to keep in mind when building your Collection is the larger strategy you are going for. Do you want to field consistently strong Units and out maneuver your enemy? Would you rather create a Unit production engine that lets you overwhelm with resources? Or would you prefer to smother your enemies with powerful Spells? These are some basic examples of strategies to go for, and while there are many many more, these three are a good place to start. Let’s take a look at the first set of upgrades you get presented with.

If you take “Field Hospital” your Units will be stronger on average, so consider taking individually strong Units that are made better by sticking around longer. If you choose “City Planning” on the other hand you should consider taking more Structures that will give you an advantage in a long game, since the extra health will give you more sustain. Taking the “Arcanum” might mean you should focus on utility spells that you would want to use multiple times in a battle.

Whatever your choice it’s important to take note of any powerful synergies between Tokens as you build your collection, make sure to check what you already have if you’re unsure what to pick. Lastly, always keep power ratings in mind when choosing a reward, since you won’t often be able to field all your most powerful Tokens.

In summary, when building your collection:

Ultimately, there are no hard and fast rules when building your Collection, since any number of strategies can be successful if played correctly. Remember, you can always start a new kingdom if you want to try something completely new.

** Spoiler warning! You can view the full Compendium of Tokens Here[www.uproomgames.com] if you want to craft your strategy with complete information. However, this might remove some of the thrill of discovery as you conquer.