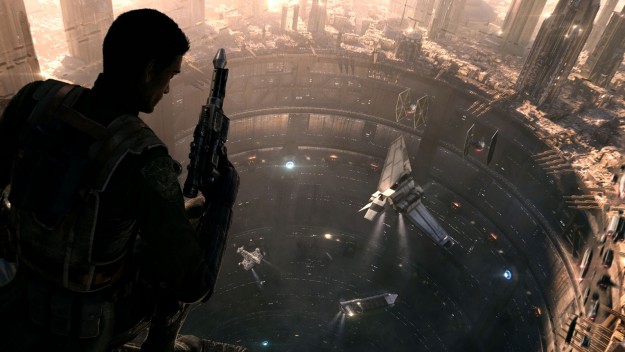 Deep Down was a single/multiplayer coop ACT dungeon crawler game under developement by Capcom for the PS4. At Playstation Meeting 2013, Deep Down was revealed alone with their new game engine “Phata Rhei”. During the Tokyo Game Show, Capcom producer Yoshinori Ono announced that Deep Down was to be a free-to-play title; the initial expected release date was to be in 2014 after a public beta coincided with the Japanese release of the PS4. In 2015, Kazunori Sugiura stated that the vision for the game had expanded, so the development time scale had been extended. This year, Capcom extended the trademark for the game, but no release date or any updates from both developer and publisher.

Star Citizen is a massive multiplayer, space trading and combat game developed and published by Chris Roberts’ company Cloud Imperium Games for PC exclusive. Development of the game began in 2011. And in 2012they Announced in a Kickstarter campaign as a spiritual successor to Robert’s previous games. The initial estimated target release date during the crowdfunding campaign was 2014, and has since been delayed repeatedly as the game grew in scale.In March 2017, CIG announced Star Citizen would eventually use the Vulkan API and drop support for the DirectX 12 API to support Linux and pre-Windows 10 users. Hope they know how to use the money they raised.

Mount & Blade II: Bannerlord is a medieval action role-playing game developed by TaleWorlds Entertainment. The game was announced in 2012, and the game project started in summer of 2011. There were not much news until March 2016, some 40 minutes of gameplay were shown at the PC Gamer Weekender event in London. In June 2017, 13 minutes of gameplay were shown at the E3 2017 expo in Los Angeles. In August 2018, players were invited to play a 30 minutes demo at the Gamescom. They were free to play how they wanted, and several videos are available on YouTube. One last question: Bannerlord When?

Dead Island II is an upcoming action role-playing video game developed by Sumo Digital and published by Deep Silver for Microsoft Windows, PlayStation 4 and Xbox One. The game was originally being developed by Yager Development, until Sumo Digital took over development in March 2016. The project started in 2012  announced at Sony’s E3 2014 media briefing, At Gamescom 2014, Deep Silver demonstrated gameplay footage from an early version of the game. In July 2015, Deep Silver announced that Yager has been dropped from developing the game and development will be moved to another unnamed developer. In March 2016, UK-based studio Sumo Digital announced that it took over the development. In August 2017, Deep Silver reiterated that the game was still in development, making a similar statement again in July 2018.

Cyberpunk 2077 was first announced in May 2012, and in January 2013, a teaser trailer was released, reaching twelve million views in its first week. The game was confirmed for Microsoft Windows the same year, and for PlayStation 4 and Xbox One. At E3 2018, where they revealed a second trailer and a media-exclusive, 48 minutes gameplay demonstration released to the public in August of that year, following its appearance at Gamescom. It seems to be coming next year.