Written for people who never played the first game and those who aren’t stealth lovers. Included some tips and tricks that will help you get through the game easily. You can teach your friends these tips if you want to invite them for a fantastic co-op session.

00 – Before You Start Playing 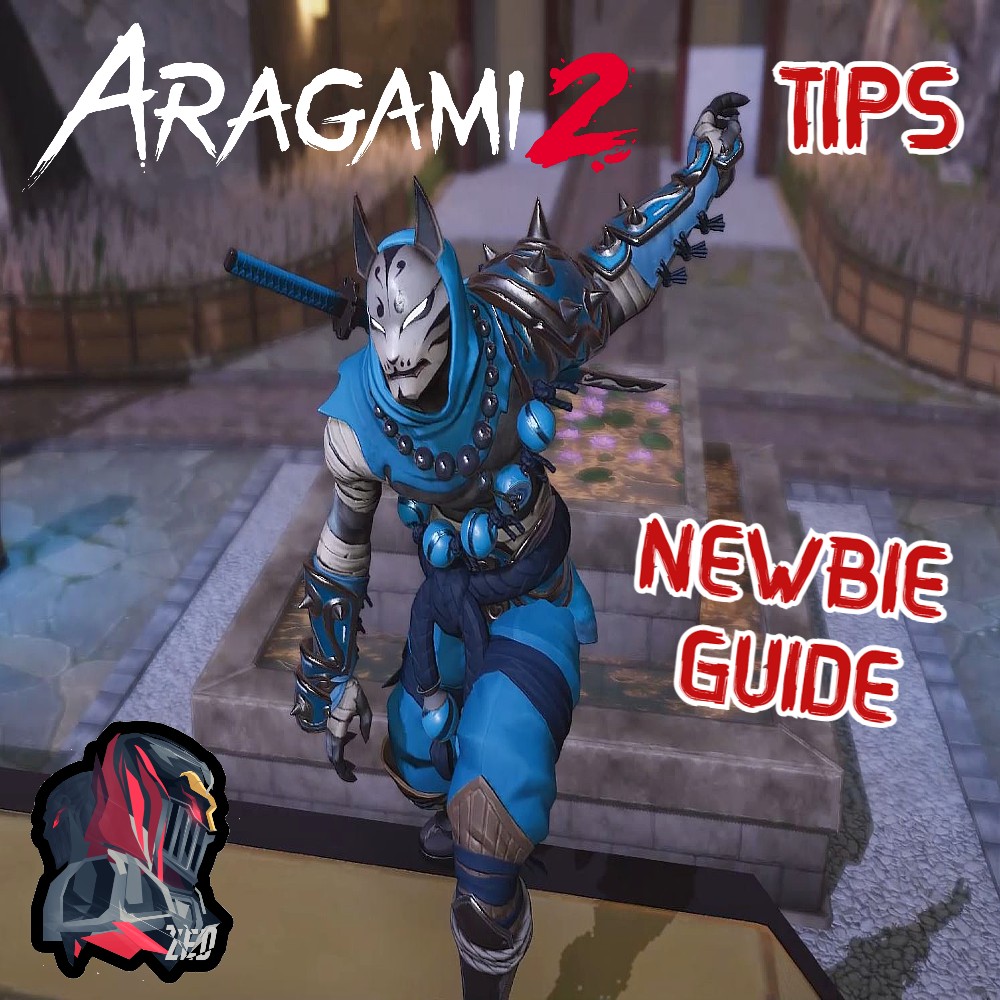 Follow the hot-fixs from the devs to get rid of some breaking bugs in the game, you need an additional 3,8 GBs, the game size after downloading the update is 15,9 GBs

To access the beta branch please follow these instructions:
● Right click on ARAGAMI 2 on your Steam library
● Go to “Properties”
● Select “Betas” on the left menu
● Select the “public beta branch” from the dropdown menu.

-> This added a lot of functions needed to play the game properly, so you should definitely do this first before trying Aragami 2 out for the first time.

Here are some screenshots taken after installing the update 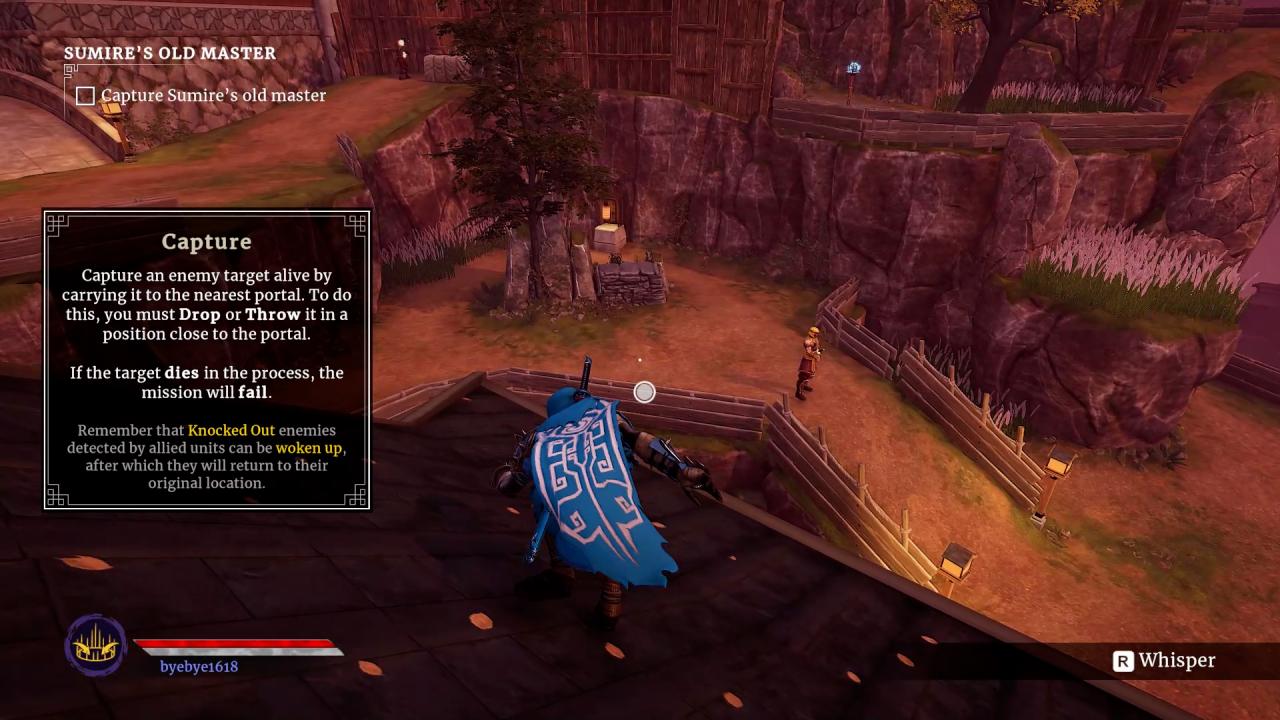 When entering a mission with a new objective or enemy type, you will get a more detailed tutorial like this floating around for 10 seconds. 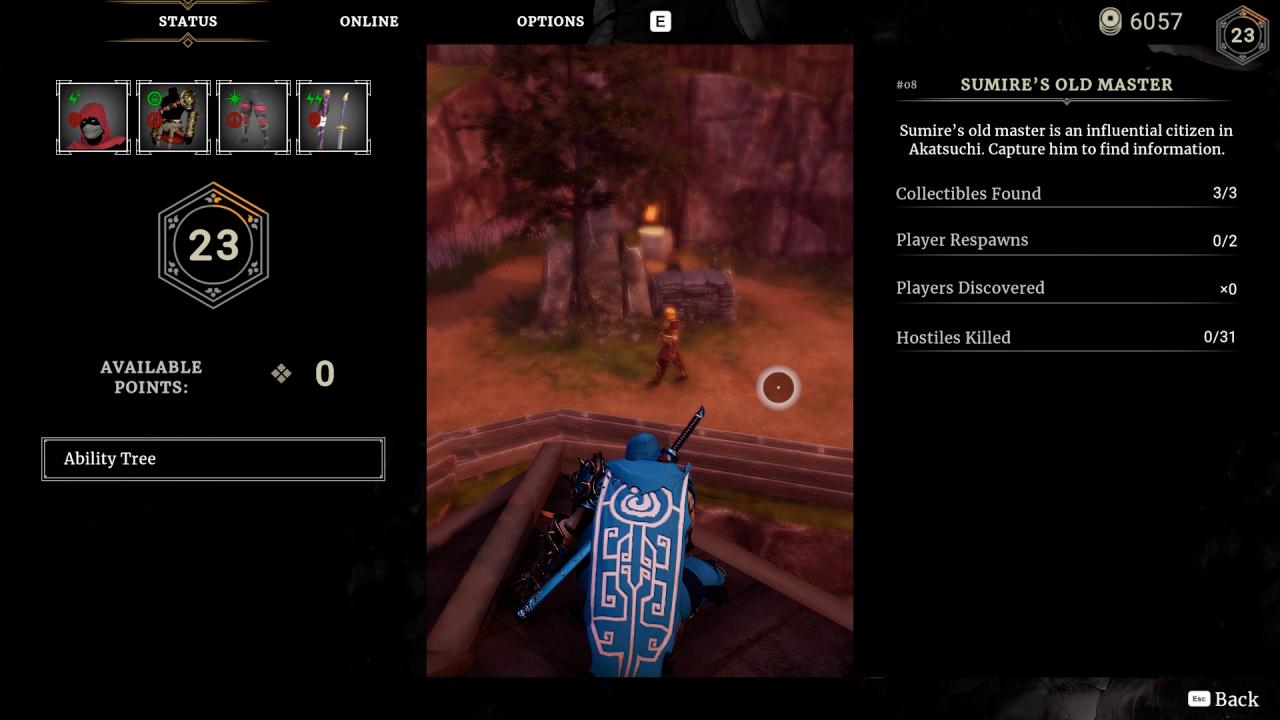 When you pause the game in Single Player mode, it actually pauses now. The devs added the statistics for each mission and the ability tree button. 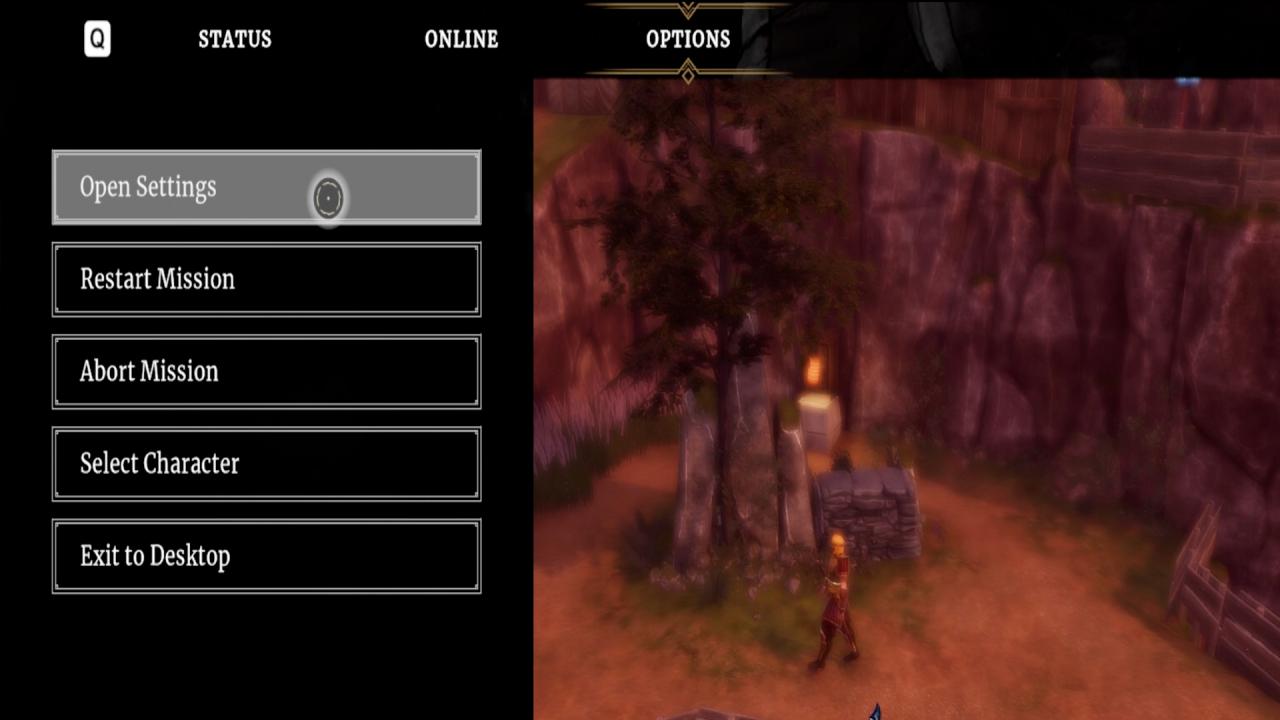 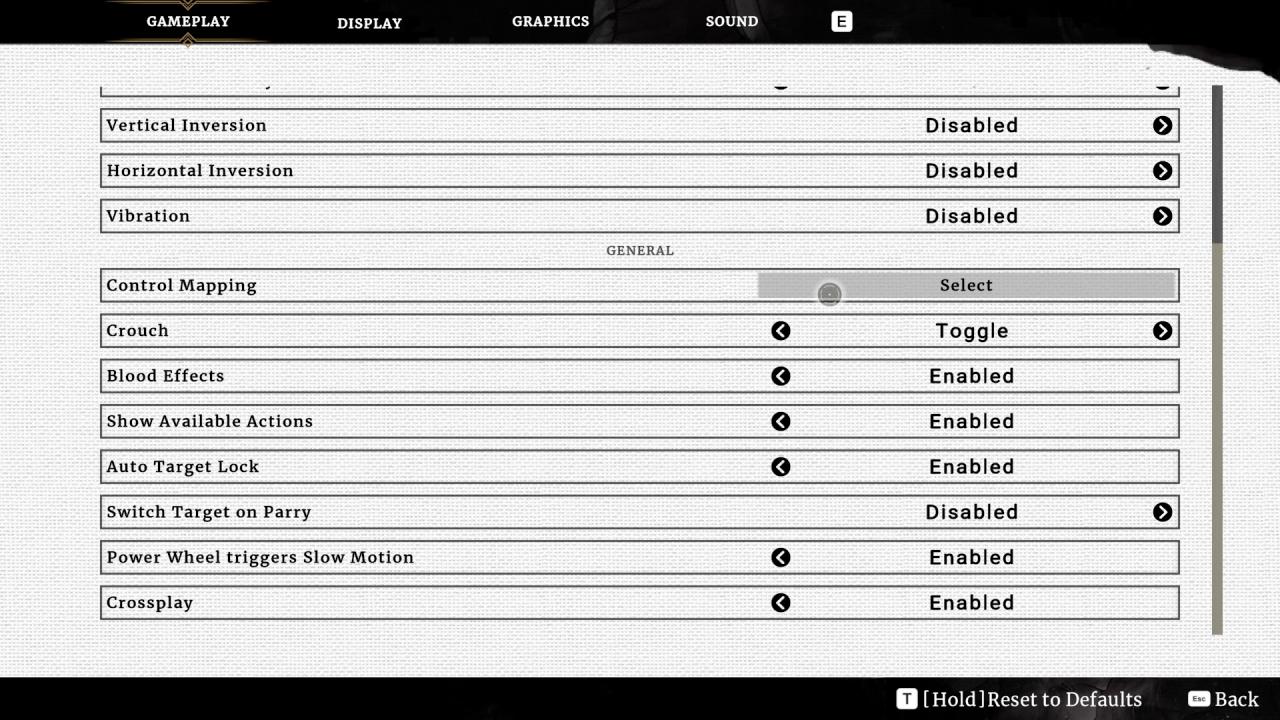 For people who are not happy with the default control settings, the beta included the control mapping function.
To access it, pause the game, switch to tab Options / Open Settings / Gameplay / Control Mapping. The game supports switching back and forth between keyboard and your plugged in controller so depends on your preferences, adjust them however you like. 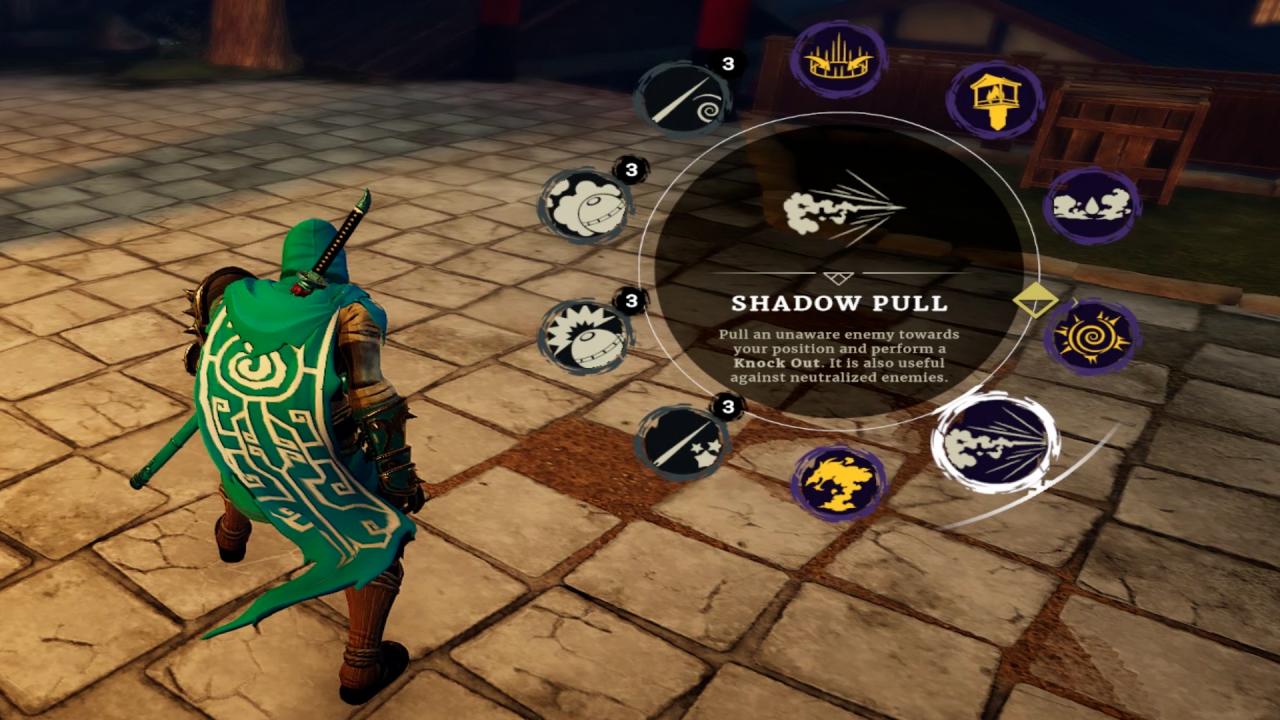 01 – Getting Familiar With The Controls

Down below are the default controls of the game, I also added my own commentary for each of them to help you learn fast what to do.

Some combos you can use, remember you can use the mouse to change the angle mid-air

The ability tree contains 24 abilities with 6 tiers, down below you can see the descriptions for each one of them. Each ability can also be upgraded for bonus effect. Some of them are straight up broken. Remember, you have to select the Power first before using them 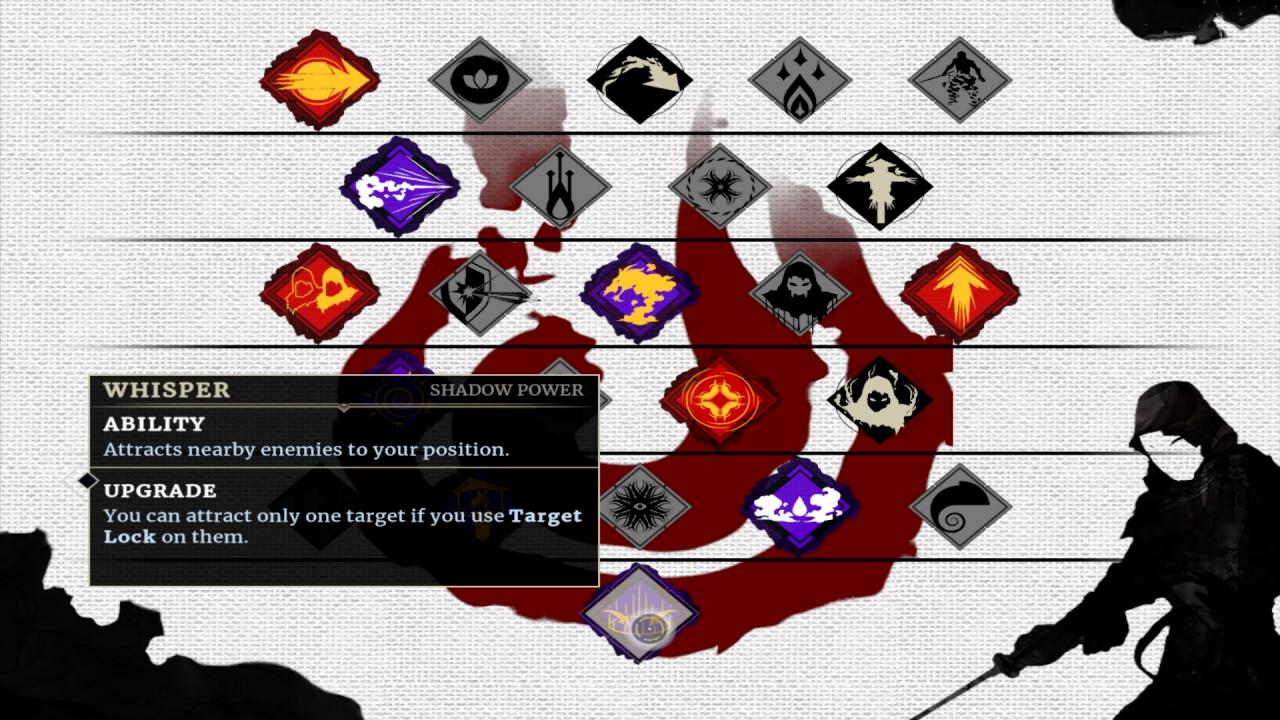 Ability 01 – Whisper: your standard tool to lure and isolate your enemies for easy knockout / kill. You can also activate Shadow Vision (V) and use Whisper to lure targets through walls. Target Locked by using Middle Mouse Button to lure only your specific target. 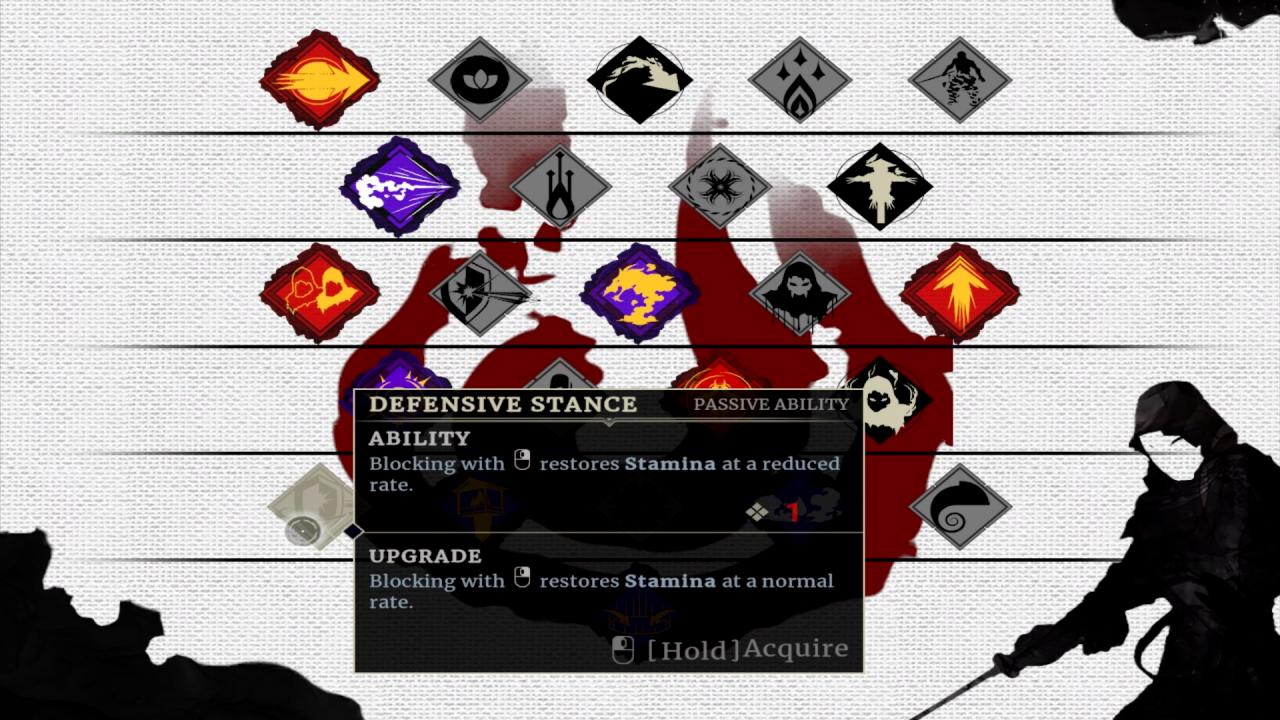 Ability 02 – Defensive Stance: suitable for someone who wants to play the game by fighting the enemy head on. Be warned, doing so will get you overwhelmed by enemies force real fast, the combat is clunky and not fun at all. 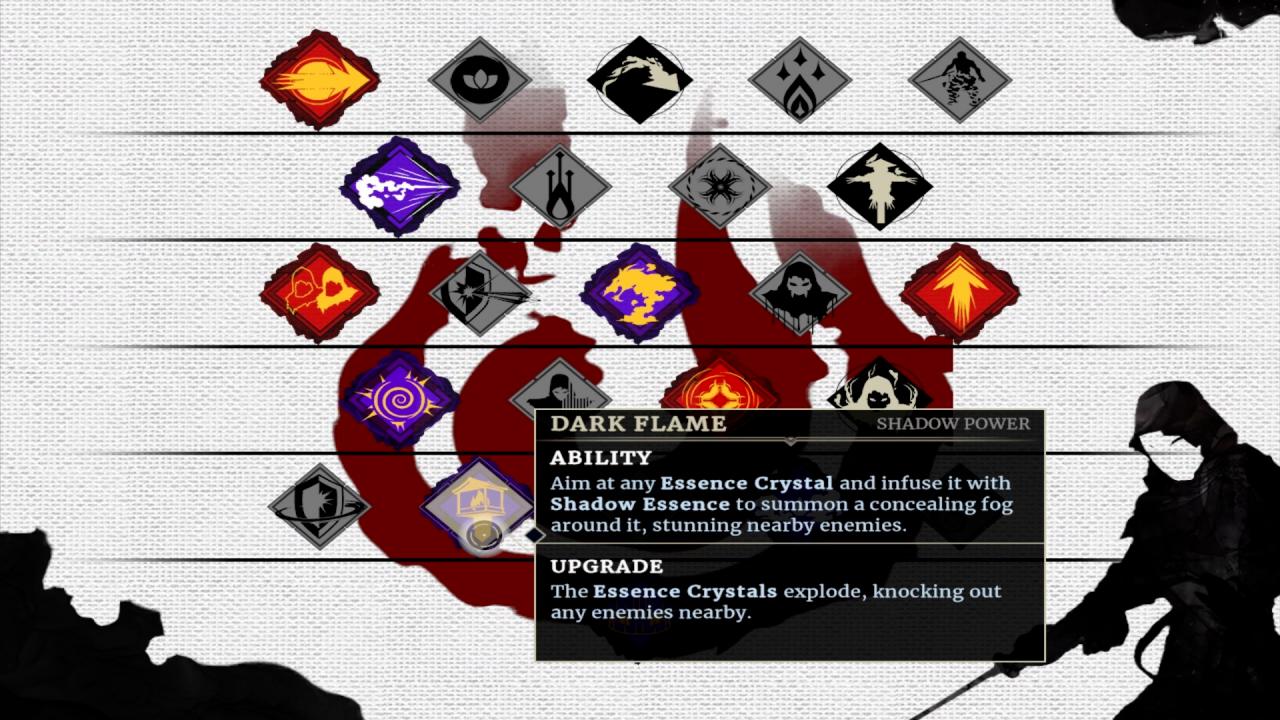 Ability 03 – Dark Flame: just by reading the descriptions, you can tell this is indeed a must have, knocking out a group of enemies when they are standing close to the Essence Crystals (big blue lights) is just way too convenient. 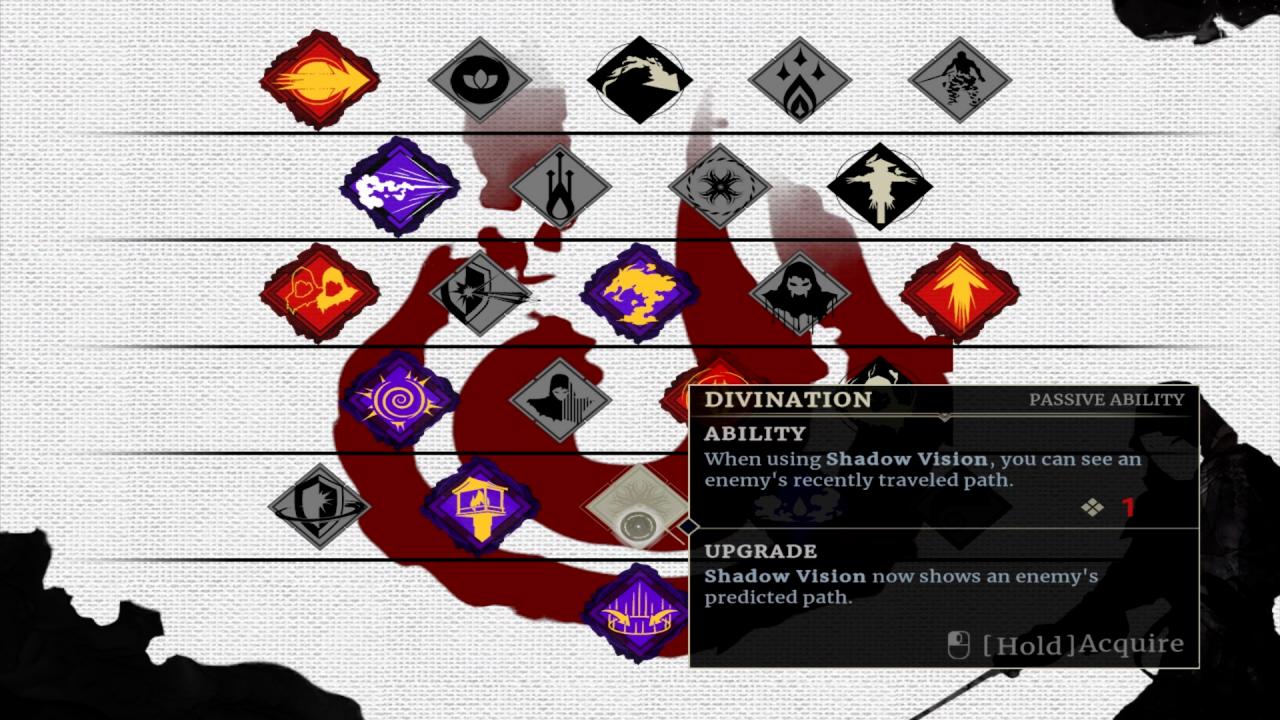 Ability 04 – Divination: Divination is suitable for those who just started playing steatlh games as it allows you to see the paths that the enemy will take. As for me, it will just make everything harder to see so it’s a big NOPE. 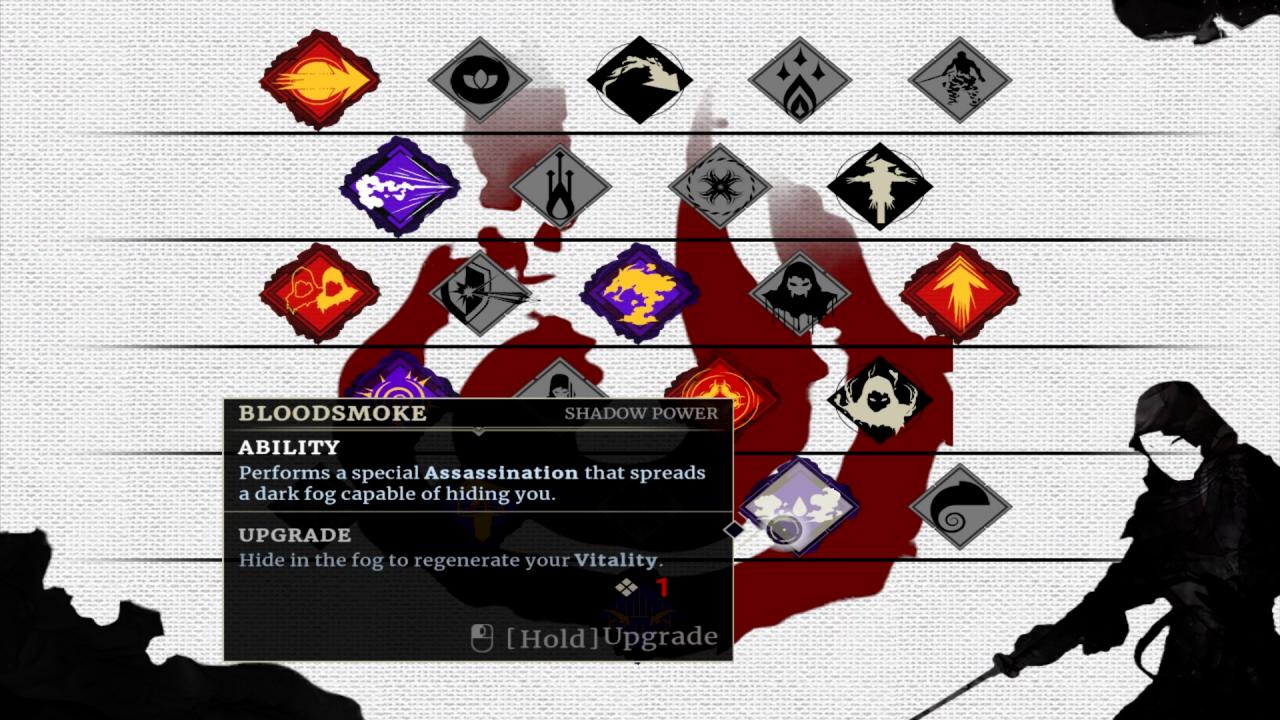 Ability 05 – Blood Smoke: usable when you are close to the enemy or you can use it after dropping from the ledge right away (only if the fall isn’t too high, otherwise your aragami will be stunned and will be easy prey for the enemy)
– When your character is inside the red smoke, he will become invisible and gained extra movements speed.
– Leaving and entering the red smoke will keep you invisible for as long as the smoke lasts (about 10 to 15 seconds)
– If you play League of Legends before, it’s similar to Akali’s smoke bomb. 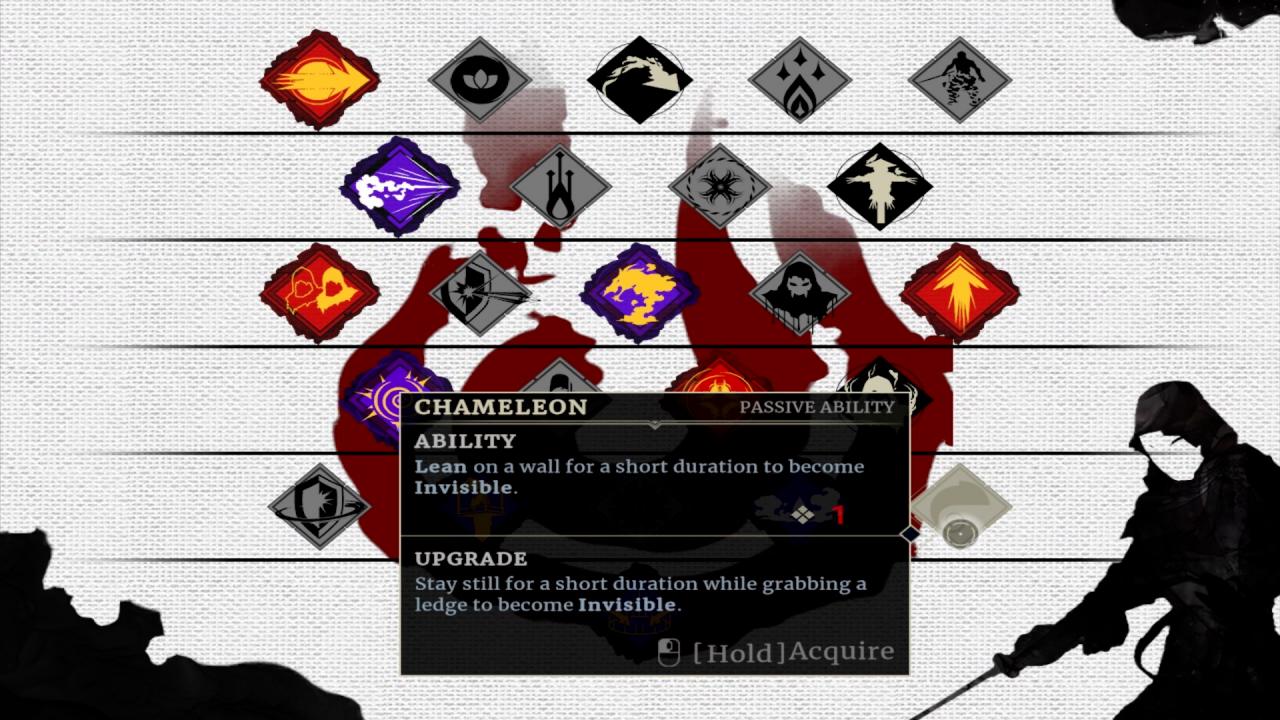 Ability 06 – Chameleon: I don’t see the point in becoming invisible when leaning against the wall or grabbing the ledge. I can simply press Drop + Jump + Dash away + Shadow Leap to reach a better location if I want to hide myself. That combo might seem hard at first but it’s way easier to apply than you think
– Anyway, this ability is useful if you want to infiltrate a heavily guarded area, and you don’t want to knock out or kill anyone to test your limits, so basically hardcore players loving ghost style. 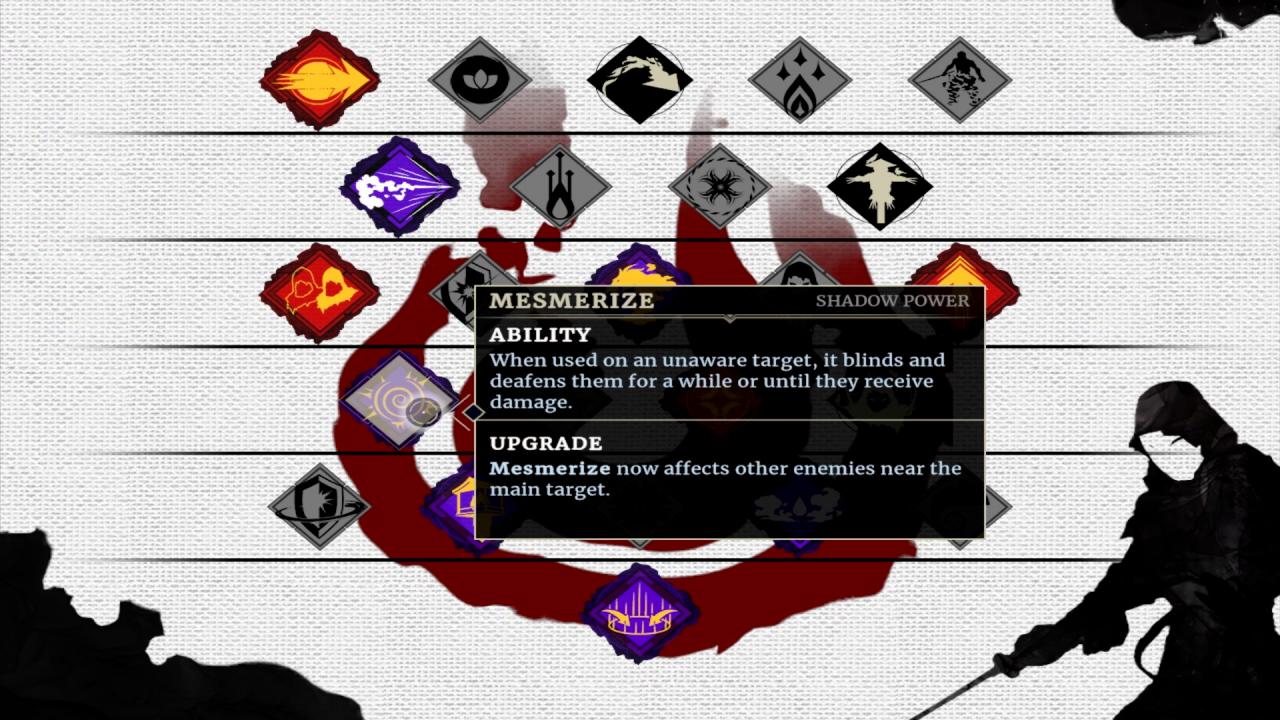 Ability 07 – Mesmerize: Mesmerize is the kind of ability you use to get past annoying enemies group blocking the path or to set up for a Double Knockout or Double Assassination when combined with Momentum
– Mesmerize affects all enemies in its range, but the timer runs down fast, so don’t be greedy and try to use it on a group of 4 or 5 enemies just to kill or knock out only 2 of them. You will be stuck in the animations and the remaining enemies will come back to their senses and F you over. 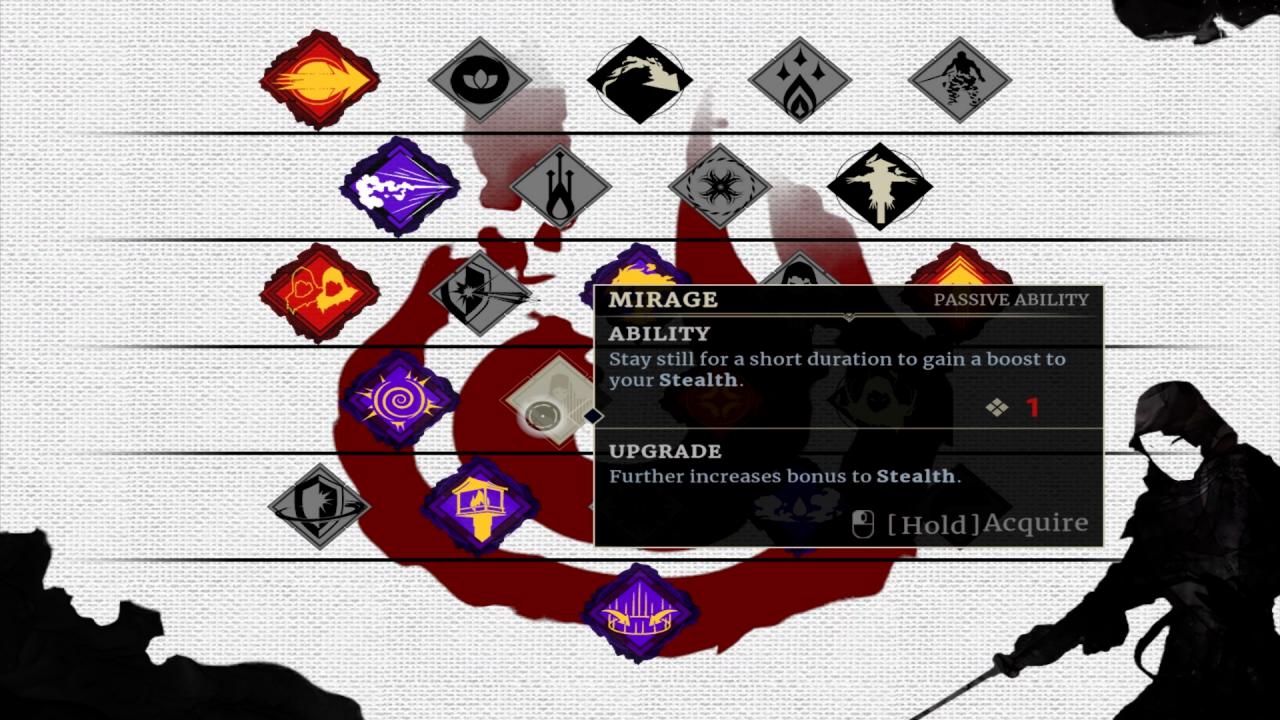 Ability 08 – Mirage: I’m not wasting my hard-earned level up points for something like this, similar to Chameleon, helpful if you are a newbie to the stealth genre. 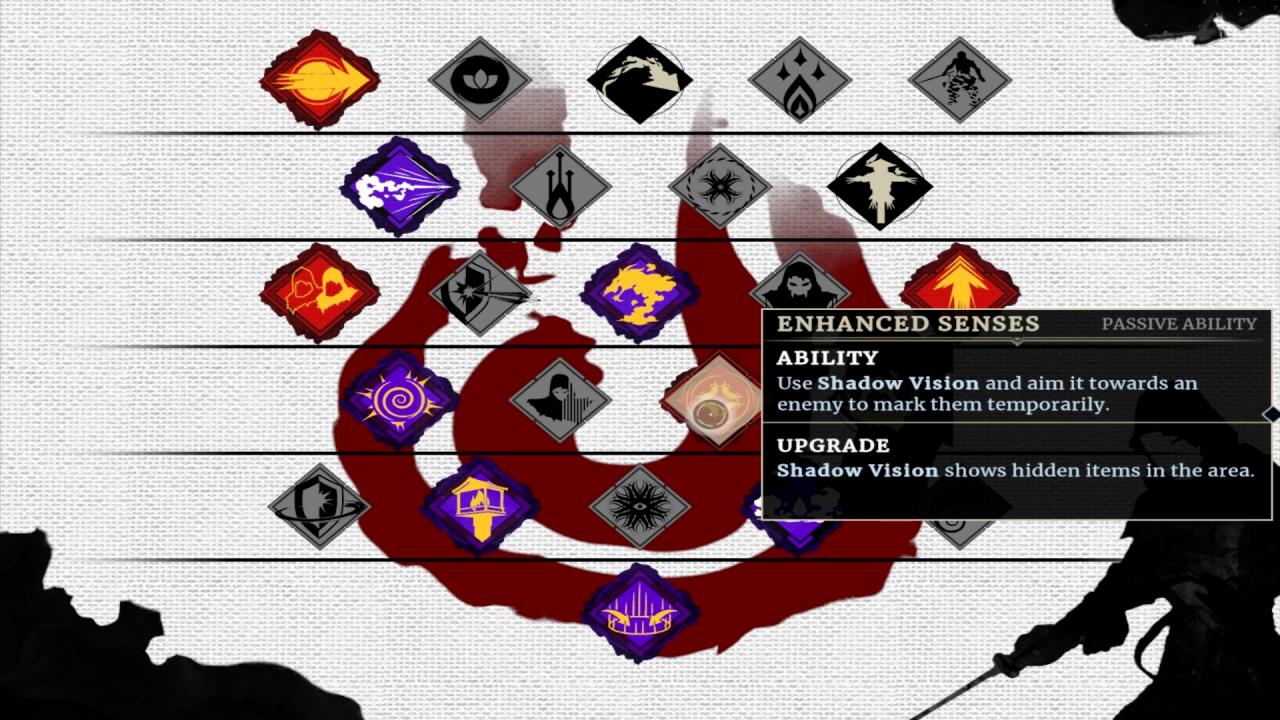 Ability 09 – Enhanced Senses: you can use this to tag the enemies for a brief moment, but why bother with it if you have Shadow Vision, the only reason I maxed this out is to run around each mission looking for collectibles. 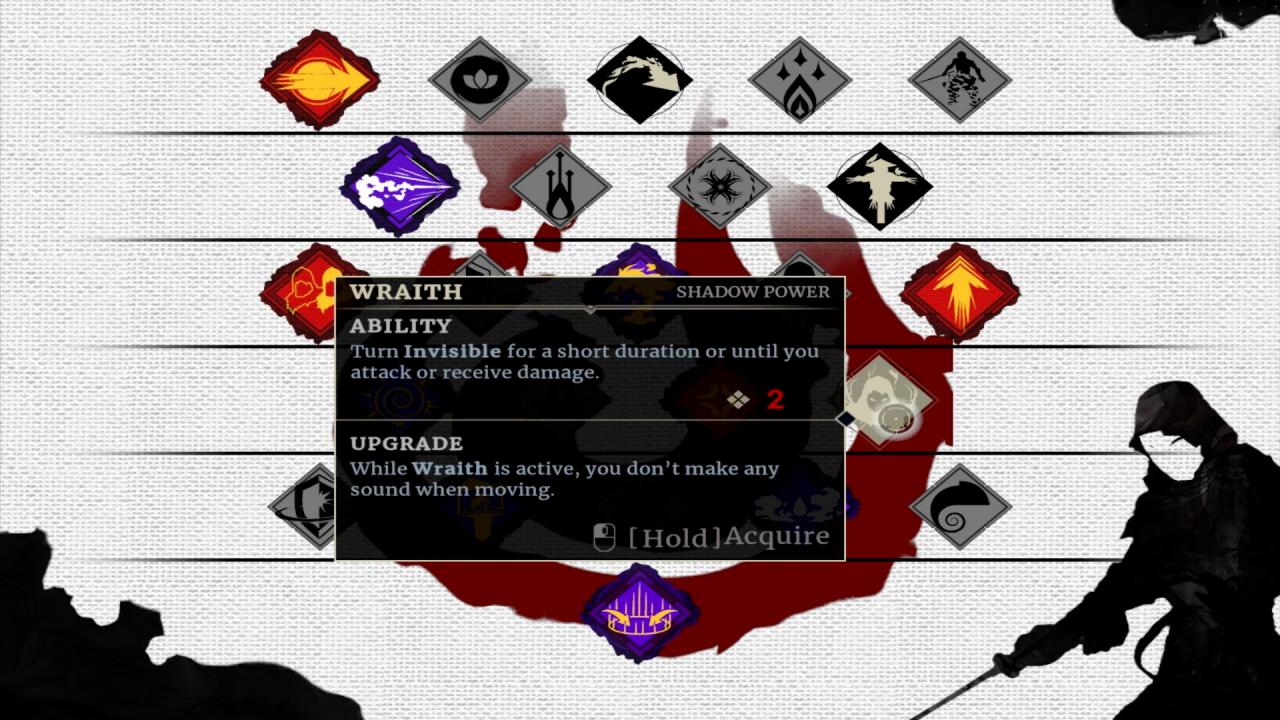 Ability 10 – Wraith: useful to an extent. It takes 2 level up points to buy the ability. If you maxed this out you can run freely past a group of enemies
– suitable for missions when you have to capture/rescue someone and bring them back to the portal. I simply knock everyone blocking the path out, it doesn’t affect the ribbon you get for sparing the enemies so I don’t purchase it. 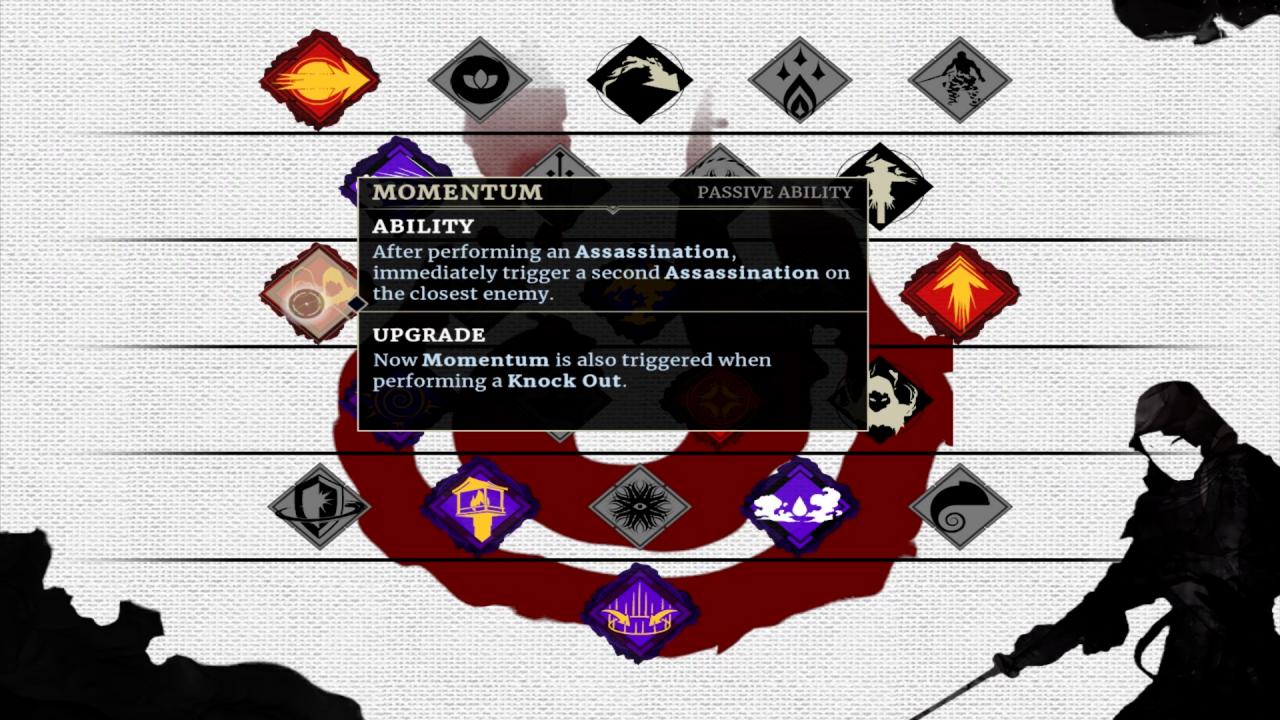 Ability 11 – Momentum: Mesmerize x Momentum is the combination you will use a lot later on. 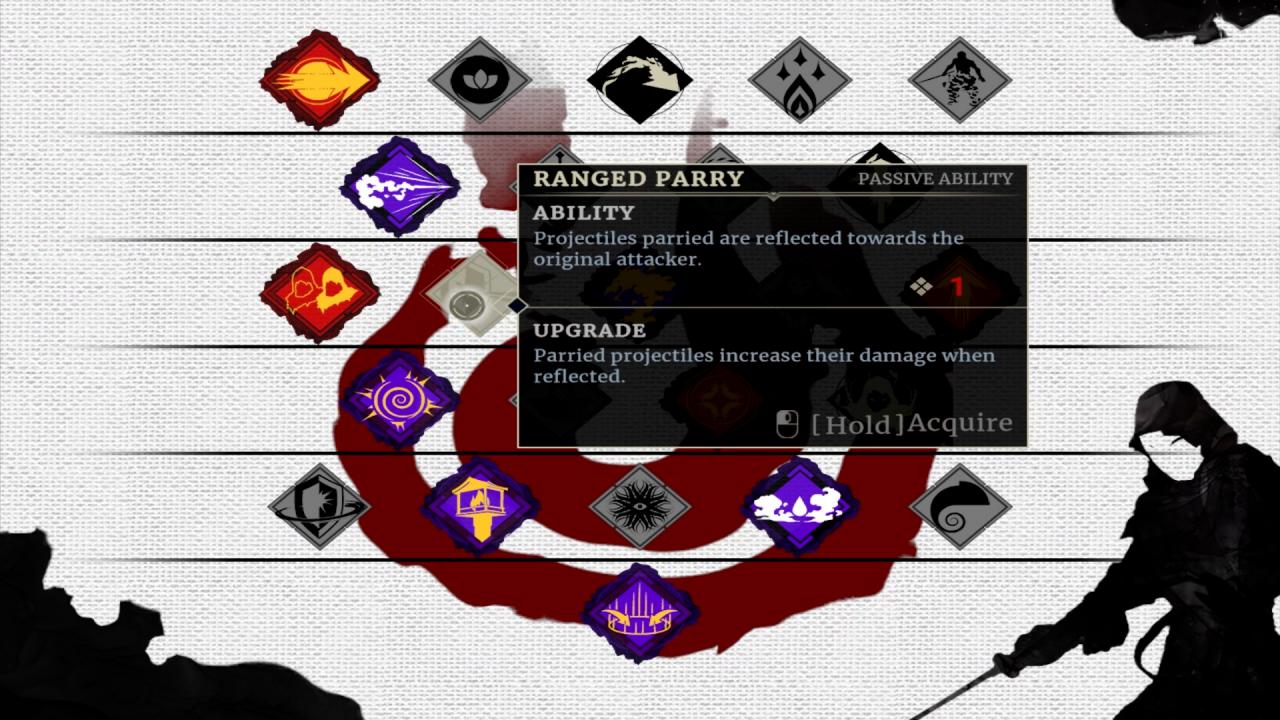 Ability 12 – Ranged Parry: only usable when in combat, that means you already have to deal with at least 3 enemies at once, so try it out at your own risks. 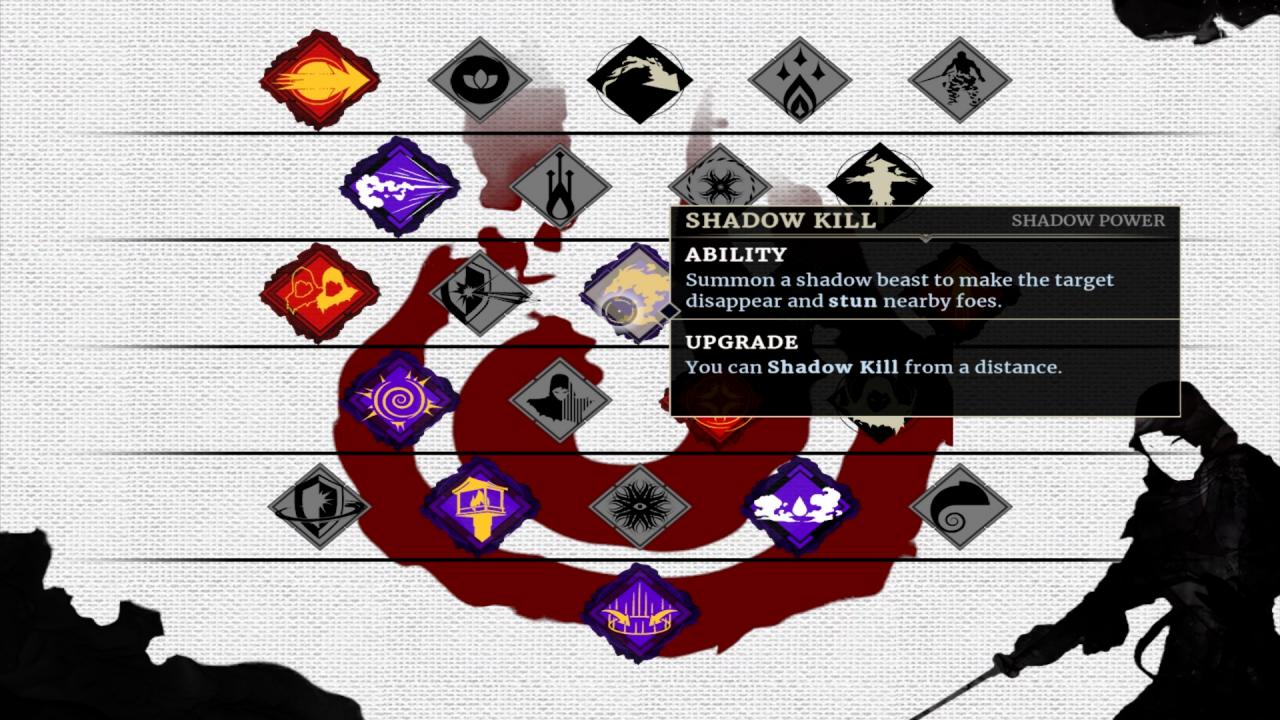 Ability 13 – Shadow Kill: one of the best powers in the game, the upgraded version is extremely useful if you simply want to kill 1 enemy in a heavily guarded area. Obviously, it has long cooldown. 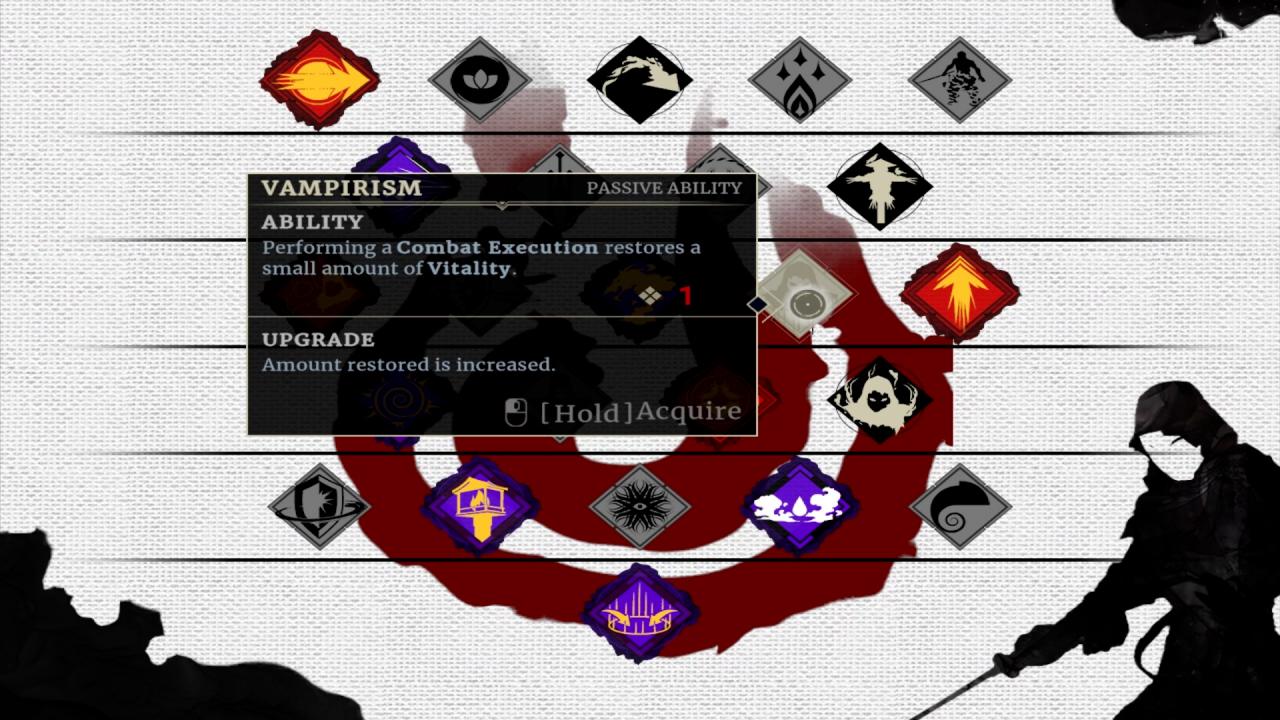 Ability 14 – Vampirism: another ability that only works when you are in combat. This could be useful when playing co-op but that’s about it 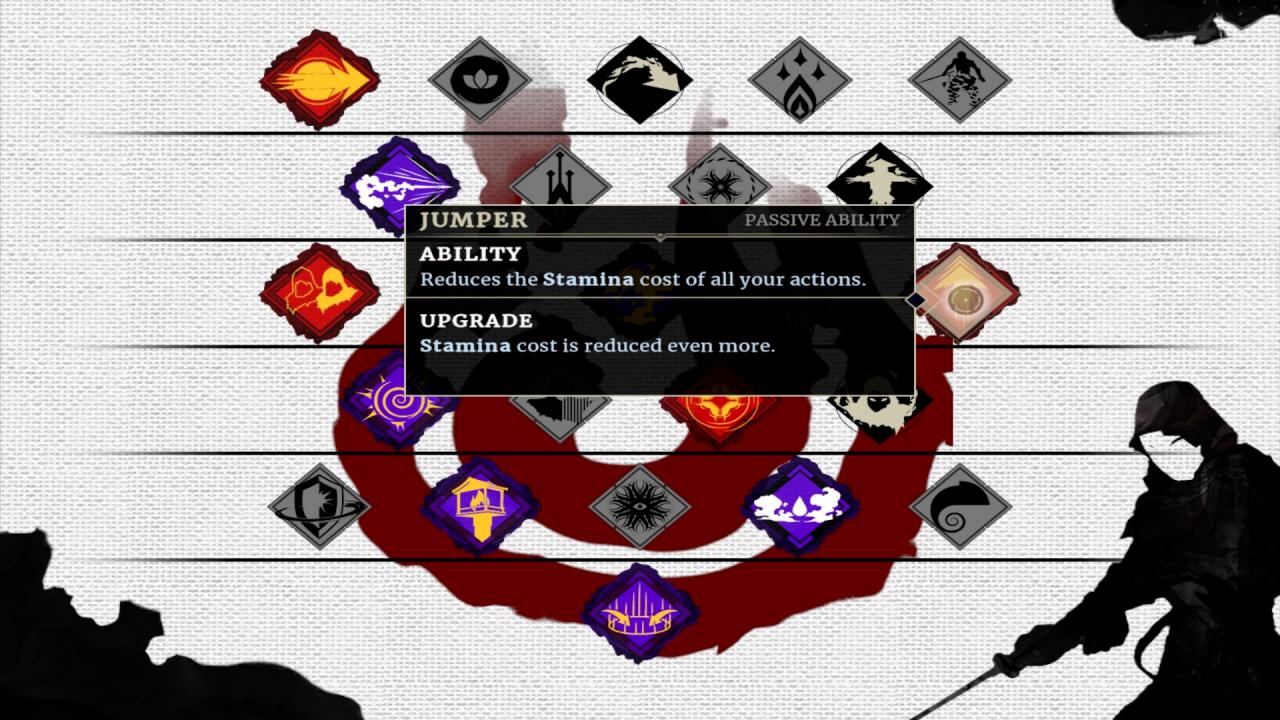 Ability 15 – Jumper: If you love dashing around, jumping like a maniac and then blink to the other side with Shadow Leap at every chance you can get then you will love this power.
– Don’t be shy, join the Jumper crew, after all the game is more fun when you use your mobility to its maximum potential. 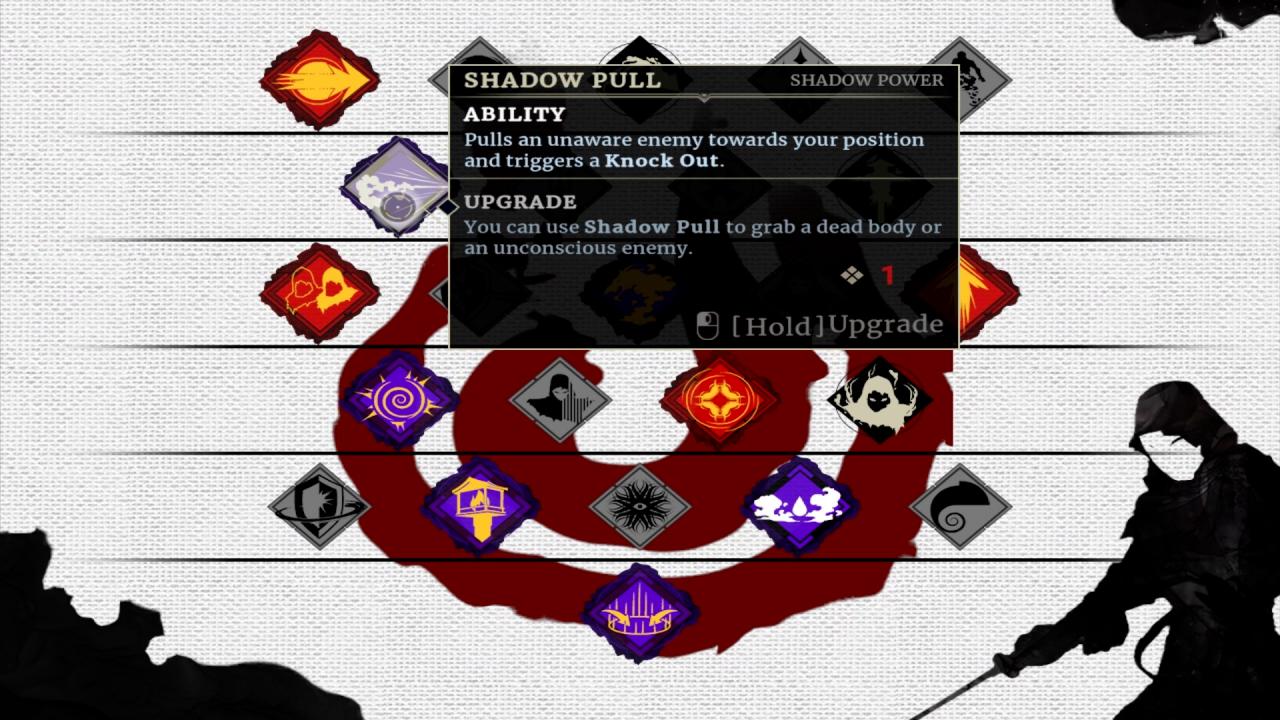 Ability 16 – Shadow Pull: the range is kinda short though and also the upgraded version is not that great to use your level up points 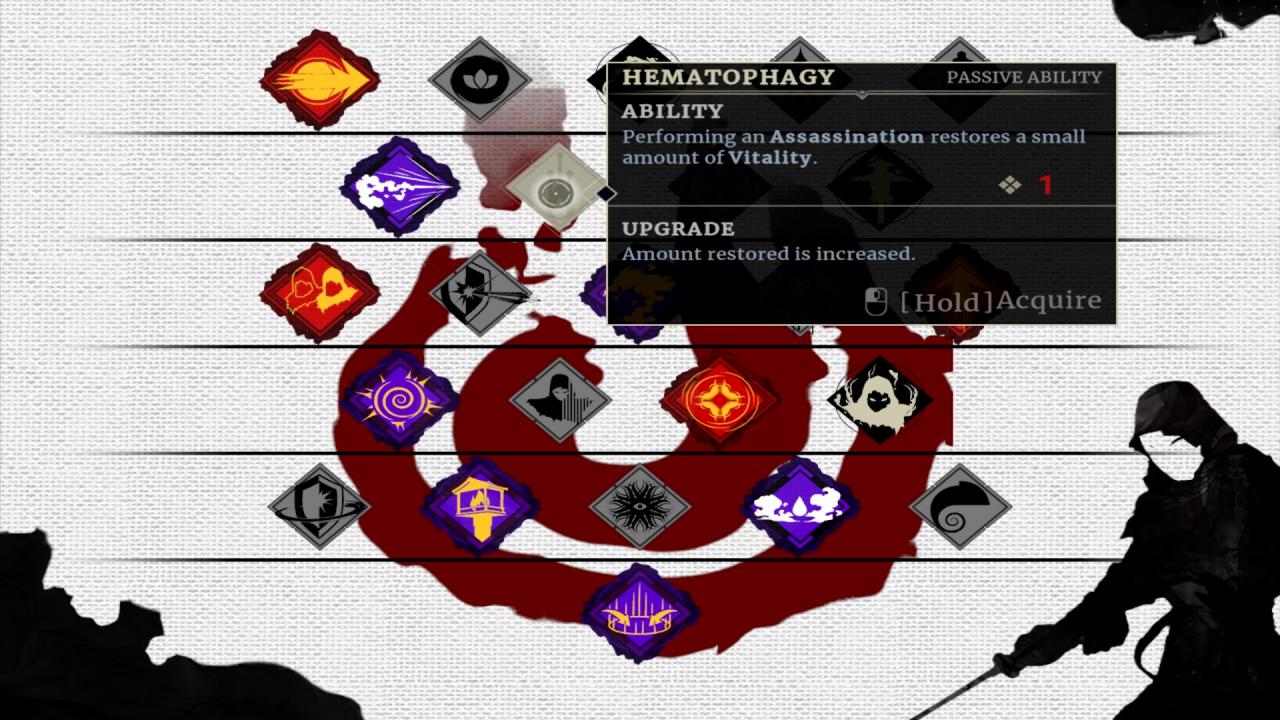 Ability 17 – Hematophagy: if you managed to reach tier 5, you should already have mastered the basics of the game, and that means you rarely have to heal yourself by killing someone. 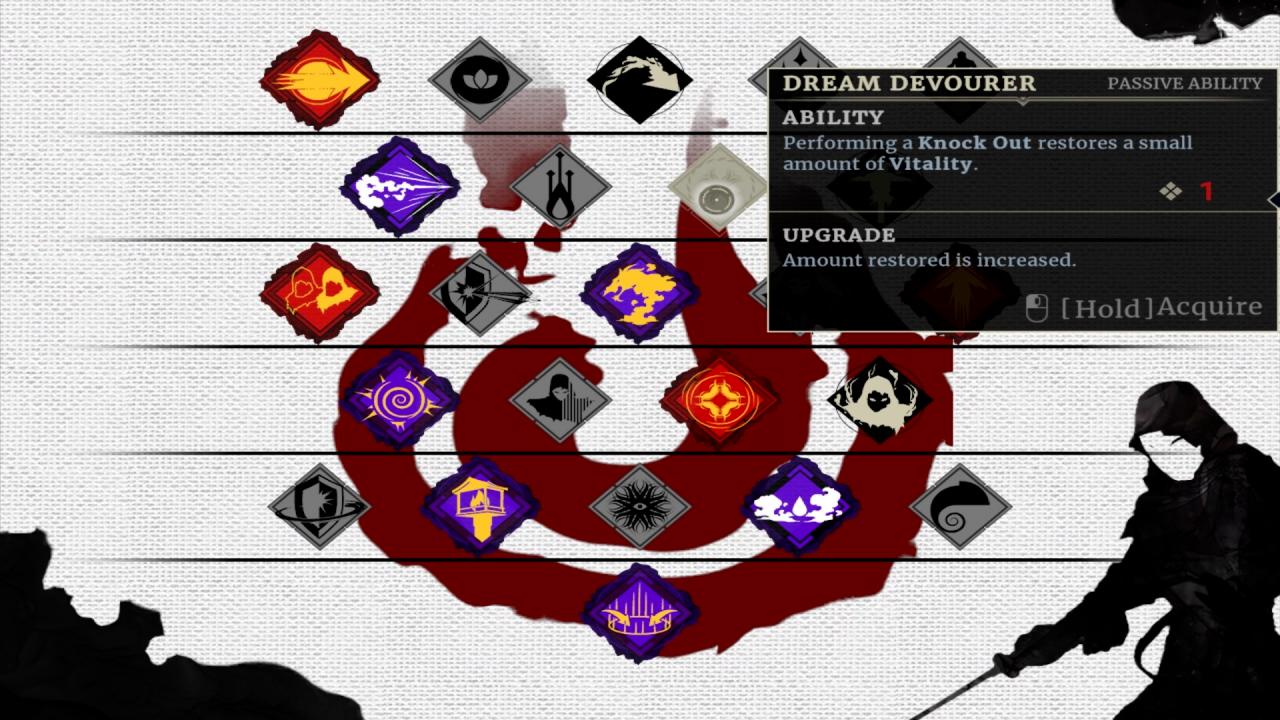 Ability 18 – Dream Devourer: just like Hematophagy but you heal by knocking out someone. 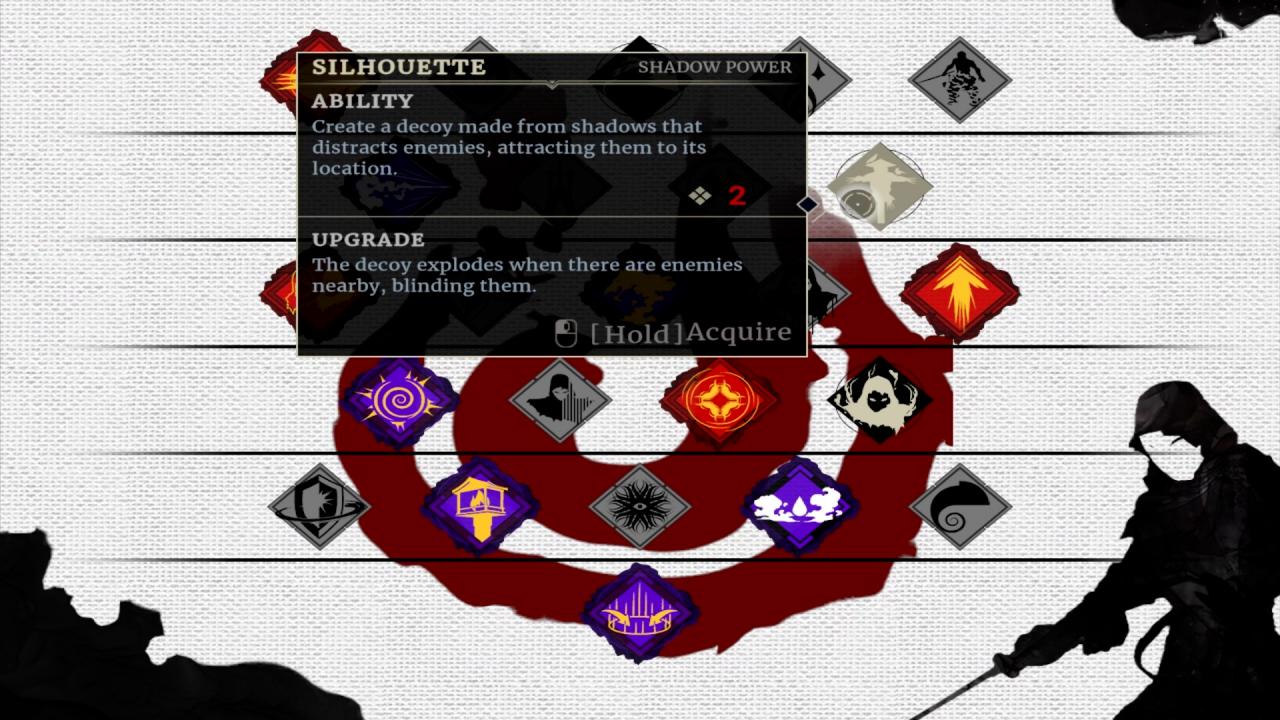 Ability 19 – Silhouette: I’m only at level 23 when writing this guide, and I don’t see the needs to distract my enemies with Silhouette.
– It’s useful to lure a group of enemies away, with the upgraded version, you can quickly use Momentum passive to benefit from this power. 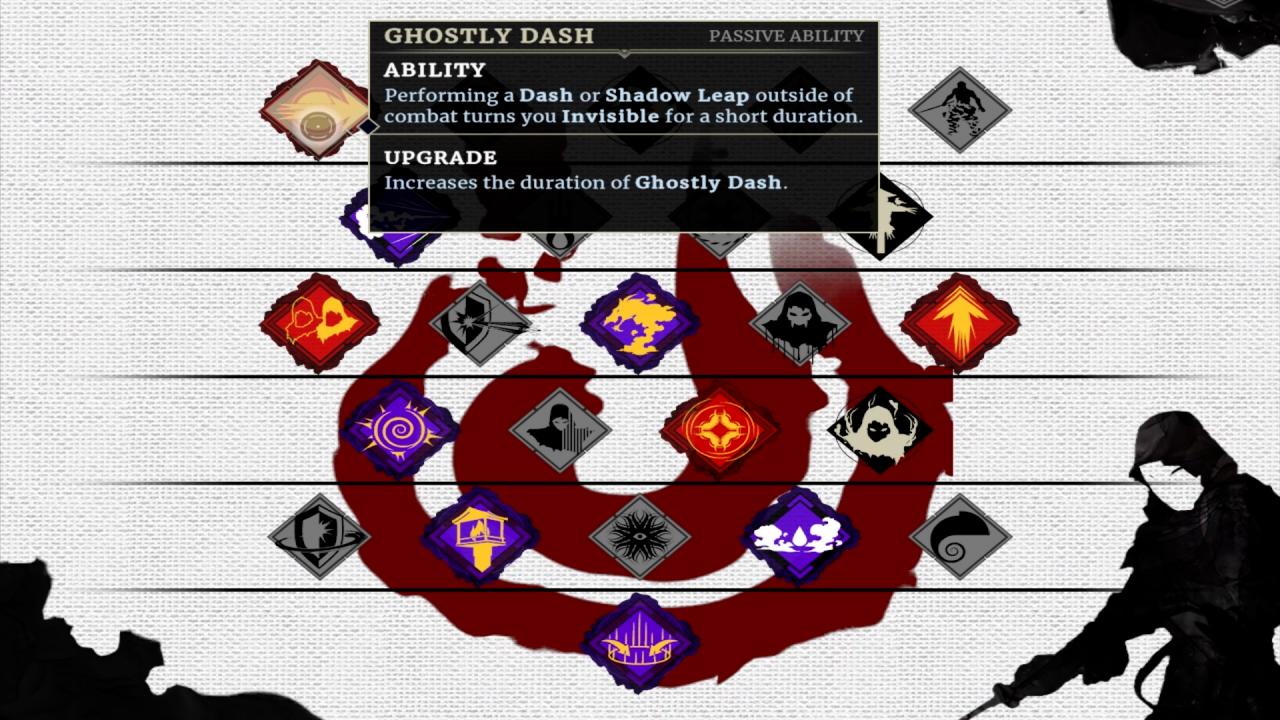 Ability 20 – Ghostly Dash: when you get to tier 6, you have already played the entire game using Dash and Shadow Leap, you know how useful they are.
– With the upgraded version, you add 1 second of complete invisibility each time you use Dash or Shadow Leap, this means you can chain them up as long as you have enough stamina.
– You can see where this is going when adding the upgraded Jumper ability passive. 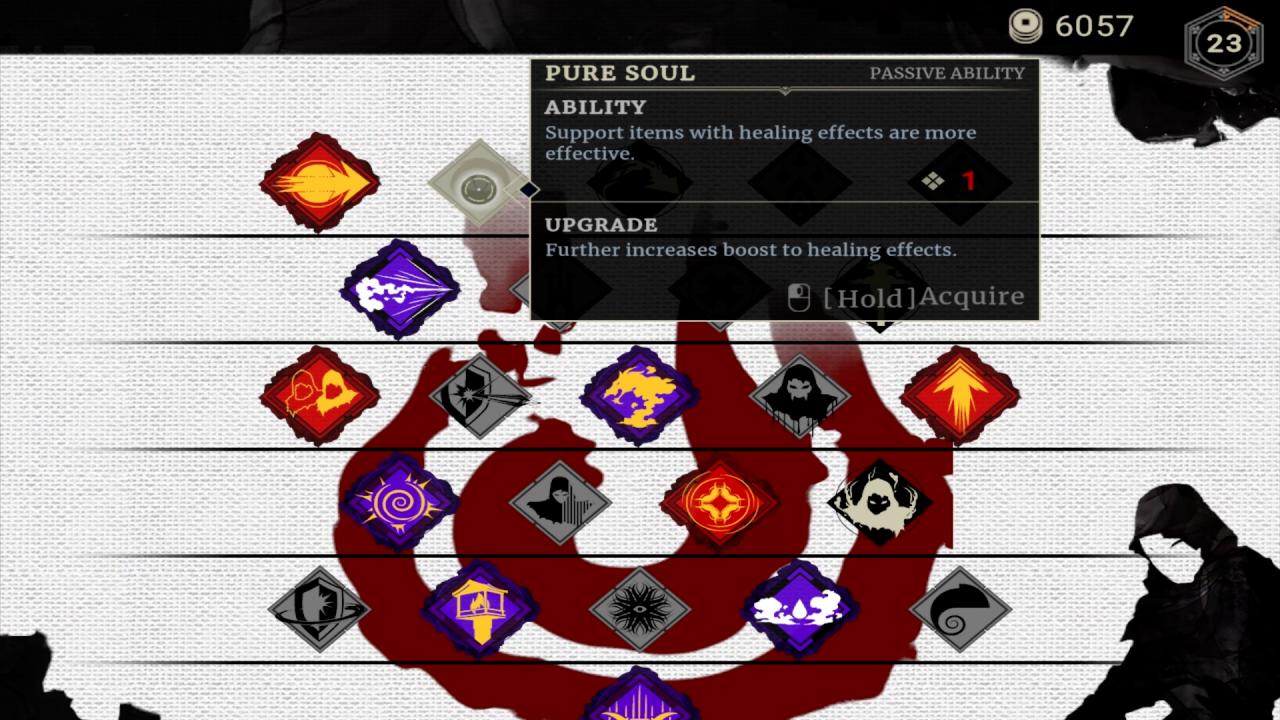 Ability 21 – Pure Soul: useful for co-op when you have to carry your friends, otherwise useless in Single Player mode. 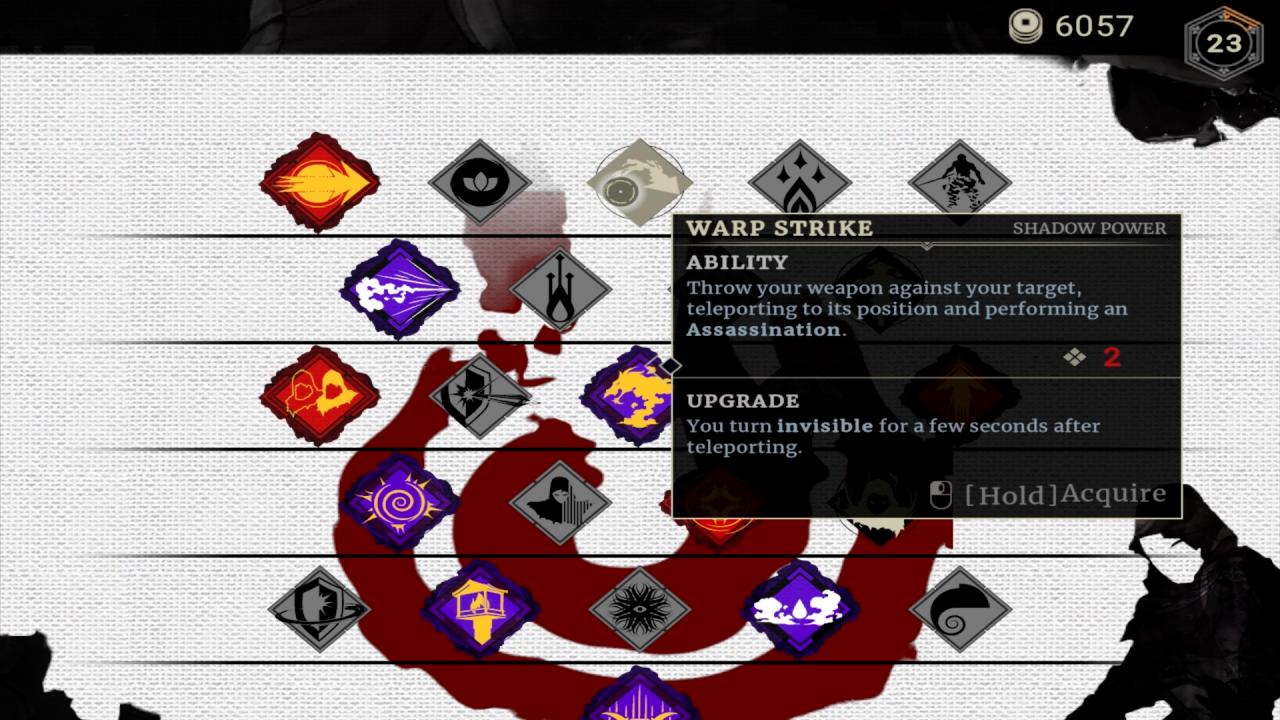 Ability 22 – Warp Strike: Yeah, I’m definitely buying this ability when I level up and then I will 200% upgrade it. 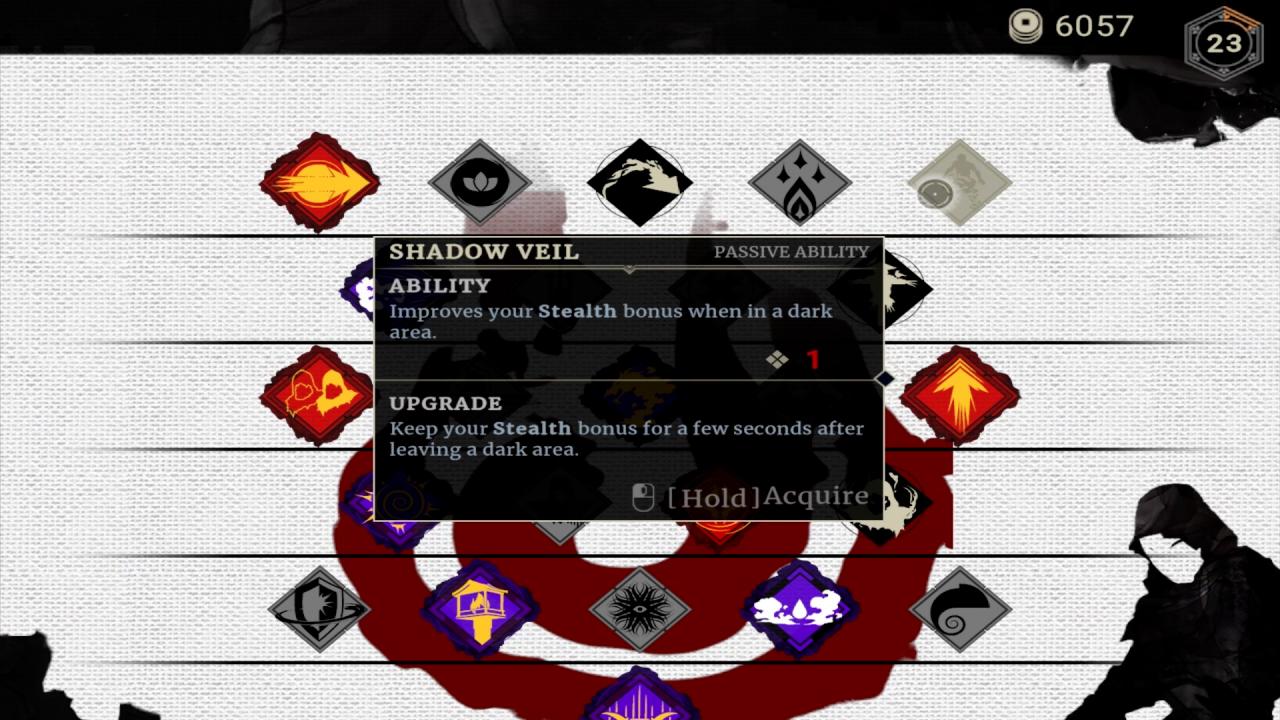 Ability 24 – Shadow Veil: “If I have nothing else to buy, I will buy this” is the way to go with this ability.

04 – How To Complete Missions Fast

– I have already taught you everything I know for now, you should be able to make it with ease.
The game only has 10 locations, it’s best to spend some time to become familiar with the areas.- As you progress, more paths will be unlocked from the same location. There are some hidden pathways that will help you reach your objectives faster.

– Try your best to ignore the obsession to search every corner when you just start playing. I know how it feels because I can’t resist the temptation. Wait until you get Enhance Senses if you are looking to collect every single collectible.

– Train your movements and cursor aim at the village to master the art of mobility. The basic Double Jump + Dash + Shadow Leap and it’s variations are needed if you want to complete the missions fast

There are no correct ways to play the game. Just play it however you want, after all it’s just a game. You play games to have fun, that’s what matters the most.

With that said, here are my 2 styles when playing Aragami 2:

Style 1: The Ghostly Spirit
– Focus solely on completing the objectives, getting in and out as fast as possible, you chose to spare everyone except for the targets the game wants you to kill.
– You’re free to run around the place looking for collectibles while chilling with some Lofi music.
– When you complete the mission, you will get the ribbons for No detection and No hostiles killed.

Style 2: The Ruthless Killer
– Kill every single one of the enemies with style. Combined master mobility with precise use of powers to create your own highlight of complex multi kills chain.
– If you need an inspiration, search for stealthgamerbr and you will know who inspires us stealth lovers.
– Better yet, blast Doom music when killing the enemies, it’s just insanely addictive.
– When you complete the mission, you will get the ribbons for All hostiles killed.

P/s: Anyway, if you guys enjoy this guide, please show me some love by checking out my YouTube channel: https://www.youtube.com/channel/UC0ioAUn5Eo_on1TmZCb4AuA/videos

Thanks to byebye1618 for his great guide, all credit to his effort. you can also read the original guide from Steam Community. enjoy the game.