Dungeons & Dragons Online: How to Get A Horse Mount 2021

This guide is only applicable to DDO players who own the Keep on the Borderlands content pack.

KEEP ON THE BORDERLANDS

In order to acquire a Horse Mount in DDO, you must own the Keep on the Borderlands adventure pack.

The Keep can be visited through Korthos or the Gatekeepers’ Grove by talking to Kregan the Gatekeeper, who resides in both locations. Outside the Keep is the wilderness area, which can be accessed through either the northernwestern gate or the eastern gate within the Keep.

The goal is to collect fifteen (15) Quaal Feather Tokens.

You trade in the 15 Feathers to Quaal of Vesve inside the Keep, who is near the eastern gate. 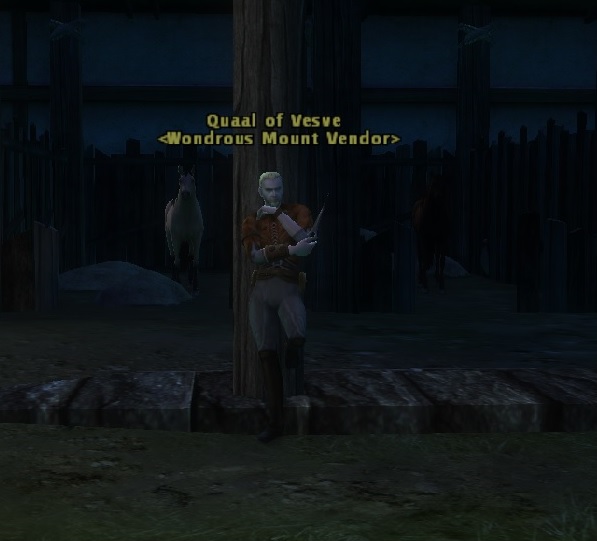 The only way to obtain Feathers is by defeating Rare encounters in the wilderness, of which there are fifteen (15) to check during each run you make through there. Essentially, you are going to check the same fifteen locations every time you run through this wilderness, hoping for two things: (1) as many Rares to spawn and (2) as many Feathers to be present in those Rare chests. As you know, the wilderness area instances are randomized, so not all Rares will be present on any given run; and not all Rare chests will have a Feather in them.

For example, here is how it went for me on my character today. On my first run, there were seven Rare encounters/chests, and I acquired 5 Feathers. On my second run, six Rares spawned, and I got 4 Feathers. Third run: five Rares and 2 Feathers. Fourth run: six Rares and 1 Feather. Fifth run: seven Rares and 3 Feathers. So it took me five runs in order to accumulate 15 Quaal Feather Tokens for this particular character, and two Rares never even once spawned for me.

I typically do the full run even after I get 15 Feathers just so that I can put extras into my Shared Bank. That way, when I run another toon for Feathers, I will have a few already.

Check out the Borderlands map[ddowiki.com] for a detailed picture of where the Rares are located. My guide below coincides with this map.

And while the Explorers and Slayers are not needed when farming for Quaal Feather Tokens in the Borderlands, you might want to work on those too for the additional XP since you are already out there. Otherwise, this guide’s scope is focused solely on hunting in the Rare locations for those hopeful Feather drops.

Having a set path for checking the Rare locations will make you more efficient in your Feather hunt. I prefer to do a clockwise path, entering the wilderness from the northwest gate within the Keep. This dumps me out from a waterfall from the Keep, facing north. Once in the wilderness, I run north to begin my large circular path.

The Rare numbers listed below are how they appear in your Quest Journal. (Press L and click on Keep on the Borderlands to the left of that panel. The Rare Encounters are listed in a specific order and show as “unknown” until you achieve each one.) You know the Rares are active during any given wilderness instance if you see the respective Rare chest. No chest means no Rare on that particular random instance seed.

The farm before you potentially has a scarecrow tied to some posts between the two white buildings.

Behind the dark windmill, run north up the steep hill. There may be a hermit named Enoch outside the cottage beside a large rock and some beehives at the top. Talking to him will summon a Rare hobgoblin.

Head east up and over the hill from Enoch’s cottage. On the other side, run alongside the river below. When the river dumps-off into the main river, cross eastward to the mountains at the edge of the map. Head north once you hit the mountains, where you might come upon a Rare harpy.

RARE #9 – Irganon the Forgotten One

From the harpy’s nest, head south alongside these eastern mountains. You will not be crossing the river for a while. Eventually, you will find a neglected grave where you may fight a Rare wight.

Continue further south alongside these eastern mountains. Up in the foothills, you might notice a Rare satyr dancing on top of some broken dark structure.

This Rare requires the acquisition of three Crests, so it is broken into four parts: the three Crests and the final battle location. You will want to get the three crests on every run you do, as this is a guaranteed Rare chest every time.

It is now time to cross the river and head west. Go into the crumbled, once “great and impressive” tower. Find the Crest of the Bat in one of three locations: the south side, the northwest side, or the north side.

Scale south down the hillside of the crumbled tower and into the wooden lizardfolk camp in the swamp below. The Crest of the Snake is here, and potentially also a Rare encounter.

The crest is at one of three locations: southwest corner on the outer walkway; up the ladder on the southside; or in the center of the camp in one of the nests underneath a wooden structure.

Head southeast from the lizardfolk camp, staying on the dry land. On the other side of the pond, there could be a Rare crayfish encounter.

Continue east and cross the river delta towards the mountains. Head north in the foothills passed the Rest Shrine. You may find a Rare goblin at a campfire on some dirt by a tree.

Come south around the mountain corner without crossing the river. You will see a path leading up to a camp where a Rare ogre may possibly be.

Cross the river to the south and head west alongside it. You may come upon a dinosaur.

Continue west for a good stretch until you find two mountain ponds on the southern side with a grassy pathway between them. There is a another grassy path to the right (west) of them. Go up the western path first.

Here is a view while facing southeast and standing on the western grassy path: 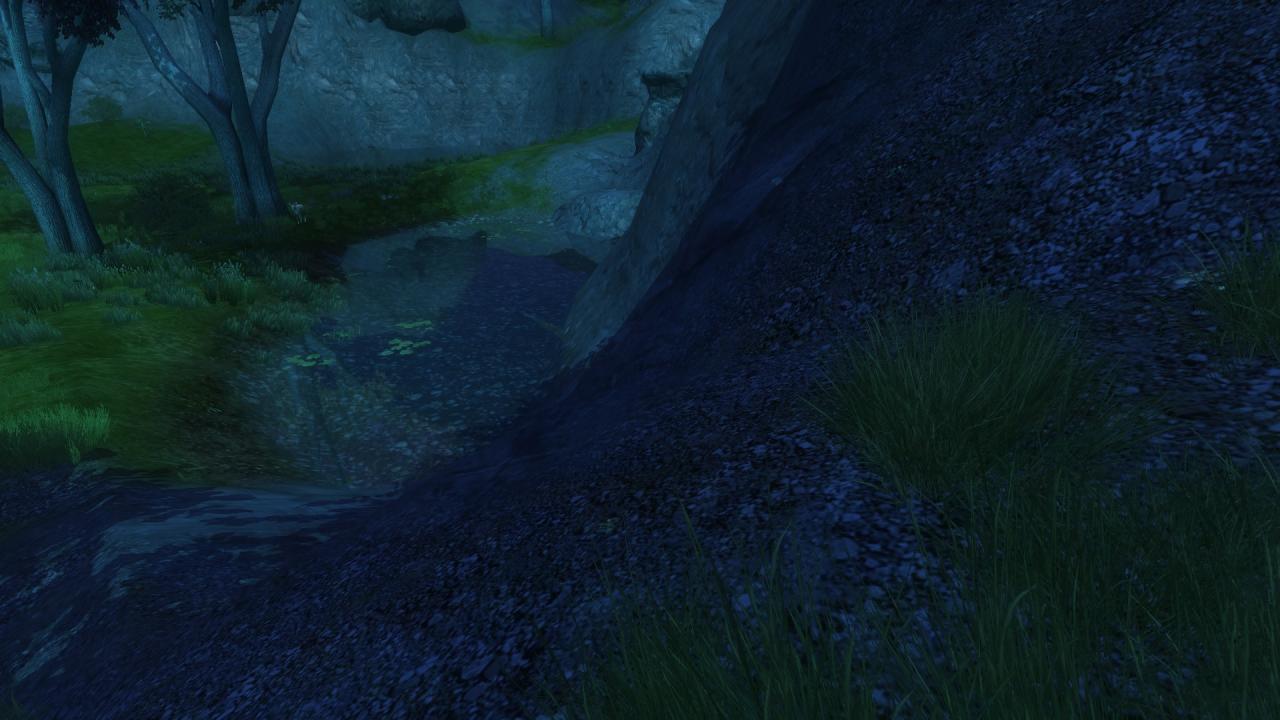 You can see the two mountain ponds and the path between them, which will be your exit point in just a moment.

Up this western grassy path at the very top potentially rests a Rare griffin.

Continue south from the griffin’s nest and fall down the backside of the hill into the spiders’ lair. There may be a Rare spider to fight.

Also, look for the Crest of the Spider, which could be in one of three locations: next to the Rare spider in the southwest corner; the southeast corner of this lair; or between a rock hill and a tree near the center of this lair.

Exit the spider lair on the northeast side, heading north. When you see the two mountain pounds previously mentioned, head slightly northwest to the fallen, hollowed tree trunk which bridges the river. Cross here to an island with a picnic spot on it. Just northwest of this island is an even littler island with a mud mound on it. A Rare mudman may be here.

Cross the river to the west and head southwest alongside it. Go up the hill west of the watermill you find and work your way to the southwest part of the map at the top. There is a small monster camp up there with a potential Rare gnoll encounter.

Head north and cross the river, then walk northeast along the white-stone road. Take the fork in the road up north to the Keep’s eastern side. Walking north passed the entrance of the Keep, you will notice a stone wall broken into three sections on the right-hand side. Take the second opening of this wall and head due east down the hill. You will notice the ancient altar at the base. This is where you will encounter a Rare dretch after you plug in the three Crests.

You have thus completed the round, so it is time to recall. Repeat this loop on a new wilderness instance (you may have to Reset the instance before re-entering) until you have your fifteen Quaal Feather Tokens.

CASHING IN THE FEATHER TOKENS

With fifteen (15) Quaal Feather Tokens in hand, you can trade them in to Quaal for a choice of one of four horse types. There are basically a white, light brown, dark brown, and near black varieties. These all operate the same and are only different by their appearances. Sometimes I choose the horse I want depending on the character I am playing – maybe I want a dark horse for my arcanists or rogues, or maybe I know I will be reincarnating into a Paladin next life, so a white horse will suffice for now. Also note that the sizes of the horses change depending on the size of your character – gnomes get little horses while Half-Orcs get big horses. This does not affect their performance in any way.

When it’s all said and done, you get the Horse Mount clickie, which I like to put into my hotbar. Of course, you can just double-click it right there on your Inventory screen, too.

Hopefully this guide was useful for you. After running the Borderlands a few times, you will eventually memorize the path to take in order to visit all the Rare locations. With increasing efficiency, you will hopefully accomplish your task of acquiring 15 Feather Tokens in five runs or less, with each run taking less than a half hour and perhaps generating 175 Slayer kills on each run. This will work with characters of all levels, even if they grossly over-level the wilderness and get 0 XP.

Lastly, if you want to upgrade your Horse Mount, run the Borderlands quests on Epic difficulty – no need to farm for Rare chests or Feathers anymore. You may receive an Enchanted Horseshoe from one of the rewards chests. Giving this to Quaal will upgrade your Horse Mount to the “Fast” variety, with all other things remaining the same.

Have fun and enjoy your new Horse Mount!