Dyson Sphere Program: How to Use Energy Exchangers (Balancing Your Local Power Network)

This guide will show you how to use Energy Exchangers for balancing your local power network, despite not being optimally designed for that.
And, following that guide, you will understand exactly how it works and why it works, and you learn something about the game.

This guide contains lots of information which are aiming at beginner players.

Please use the Table of Contents to find the information necessary for you. 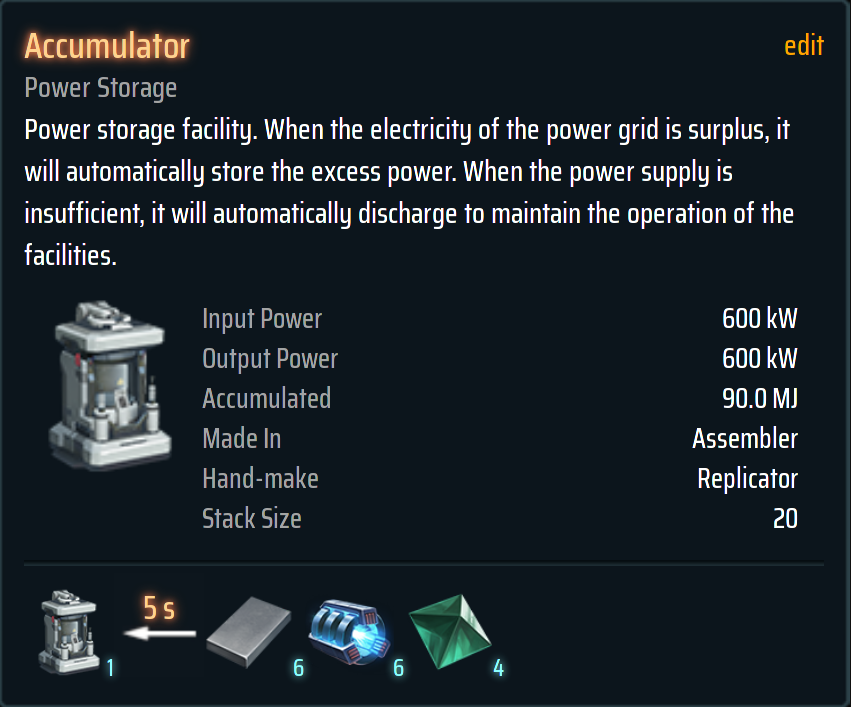 The game has buildings called Accumulators.
When fully charged, they contain 90MJ energy. When you build it as a regular building, it can release those 90MJ in 54 seconds with a rate of 600kW. When there is surplus energy, an empty accumulator can charge within 54 seconds with 600kW until full.

The developer’s idea is that you build a huge farm of accumulator buildings if you want to use them for stabilizing your power network, for example, if you have a strong difference between day and night. 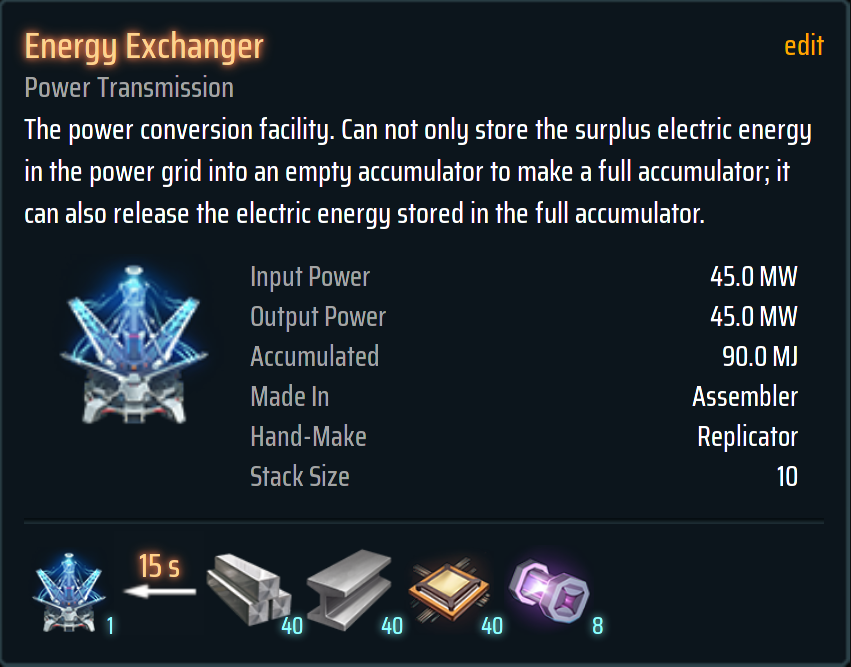 Because Energy exchangers always discharge at full power, they become the primary energy source of that network, making regular fueled power generators provide less energy, thus burning less fuel. This means, they are per se not usable for local network balancing, like regular Accumulators as buildings are.
The big question is now: Is there a way to use Energy Exchangers for network balancing anyway?

The answer is of course:

It is just not immediately visible how, as the developers didn’t want you to use them this way.
(If the answer were no, there’d be no reason for this guide anyway!)

How it works (Preliminary Basics)

The naive attempt would be hooking two Energy Exchangers together, one in Charge mode, one in Discharge mode, like this: 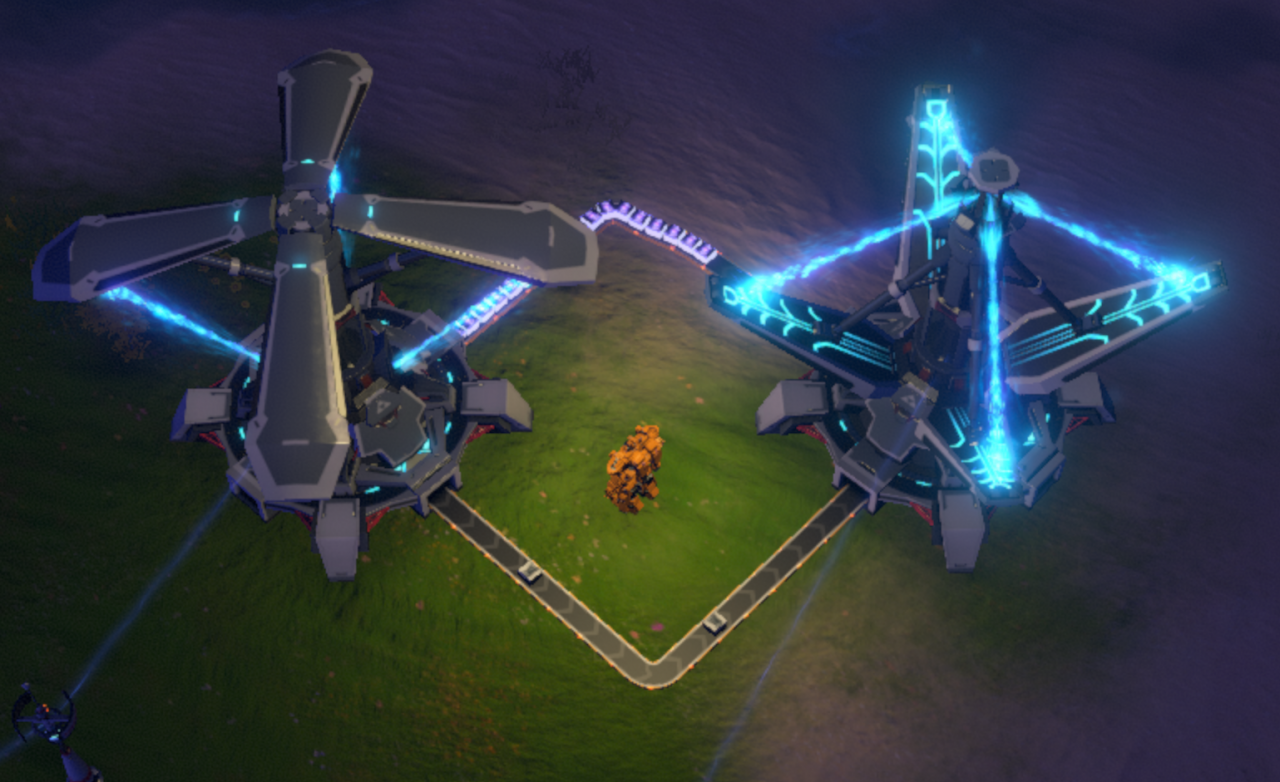 The problem is, that this way, while in bad times, your network is being helped by discharging accumulators, in good times, the charge and discharge ratio is equal. This means, you will run out of full accumulators over time. And that’s not what we want from network balancing.

The second naive attempt would be: ok, well, then let’s hook up *two* chargers for one discharger. This way, in good times, more accumulators get charged than discharged.
But this is also problematic: over time we will end up with all accumulators charged, and running out of empty accumulators, which isn’t bad in itself, but that means accumulators are discharging uselessly while no empty accumulator is charging.

That’s why we need to find a more sophisticated way than just hooking Energy Exchangers together.

Basics 2: What happens on Energy shortage

The whole energy network is homogenious. When there is energy shortage (meaning demand surpasses generation capacity plus eventual accumulators discharge capacity), all buildings demanding energy get the same percentage of energy. If your network needs 50MW energy, but your generation capacity is only 40MW, you are 10MW short, which is 20% of your demand, and you are only meeting 80% of your demand. That means, all buildings work at 80% energy/capacity. For most (if not all?) buildings this simply means, they are working at reduced speed, and the less demand is met, the slower the building works.
Energy shortage also means, wireless towers are charging the Mecha at a slower speed.

Splitters are nice buildings, and absolutely important for efficient layout of distribution networks. The basic property of Splitters is having 4 ports, which you can hook up incoming and outgoing ports to as you like (of course you’ll need at least one incoming and one outgoing), and the Splitter will distribute incoming items evenly to outgoing ports. Additionally to that, Splitters can have maximum one priority output port, and one priority input port. Priority input means, as long as that port has items incoming, they are taken from this port, otherwise from other input ports, and if no input port has any items, the splitter runs idle. Priority output means, as long as that port is free, items are sent out this port, otherwise through other output ports, and if no output ports are free, the belts are stuck. Priority output can have another property: a filter for one item type. If the filter is set, the Splitter behaviour changes: only this item type is put into this output port, and this item type will never come out of the other output ports. This leads to stuck belt if for example the next item in the Splitter is the filtered item, but the filter port is blocked, regardless of the state of the other output ports.

The most important belt merge to remember is the two inputs belt with one straight input, giving priority to one of them.

Now, how to all those things come together?

Remember what is affected from energy shortage, and what is not. Belt speeds are not affected by energy shortage, Sorter speeds are affected. The less energy demand is met, the more regulation is necessary, and the more energy becomes available due to regulation, the system gets inhibited again. Once there is enough energy available from outside, the system stabilizes itself. 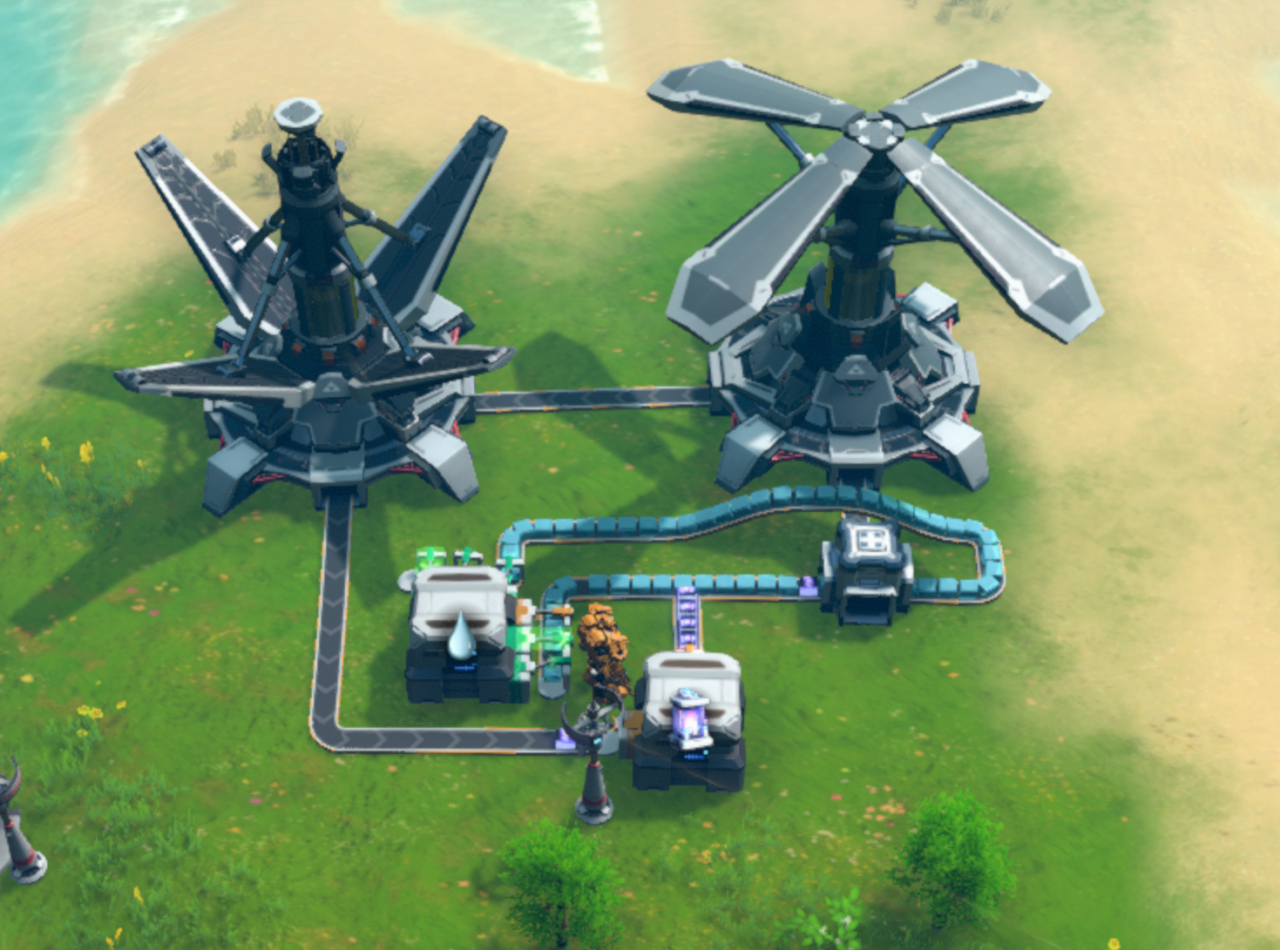 When there is enough energy from power generators again to satisfy the needs, there will be no discharging anymore, and the spent empty accumulators are charged as the energy network allows.
At the end, all your accumulators end up charged in your storage again. 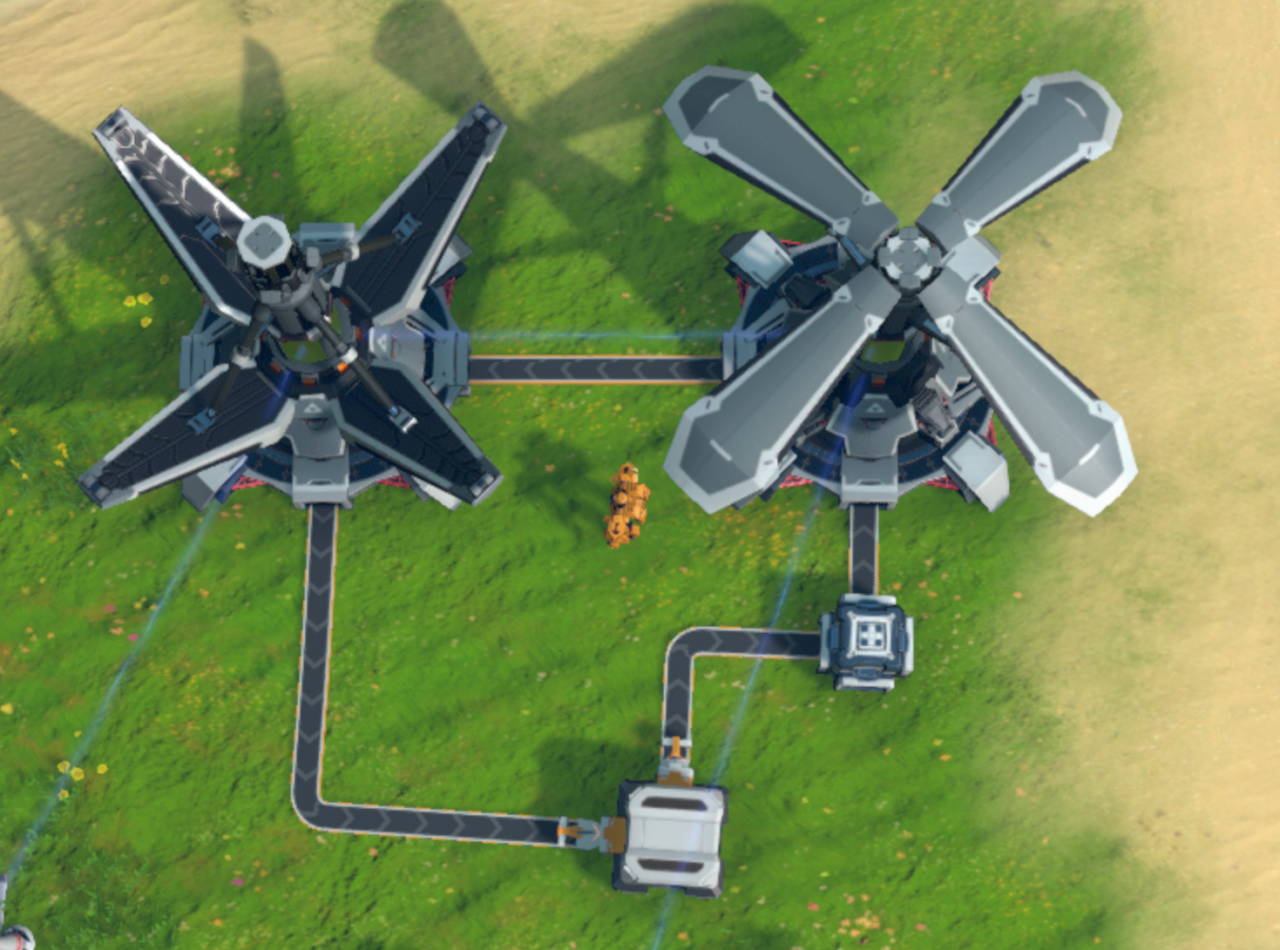 At the end you should have a closed circuit of belts. 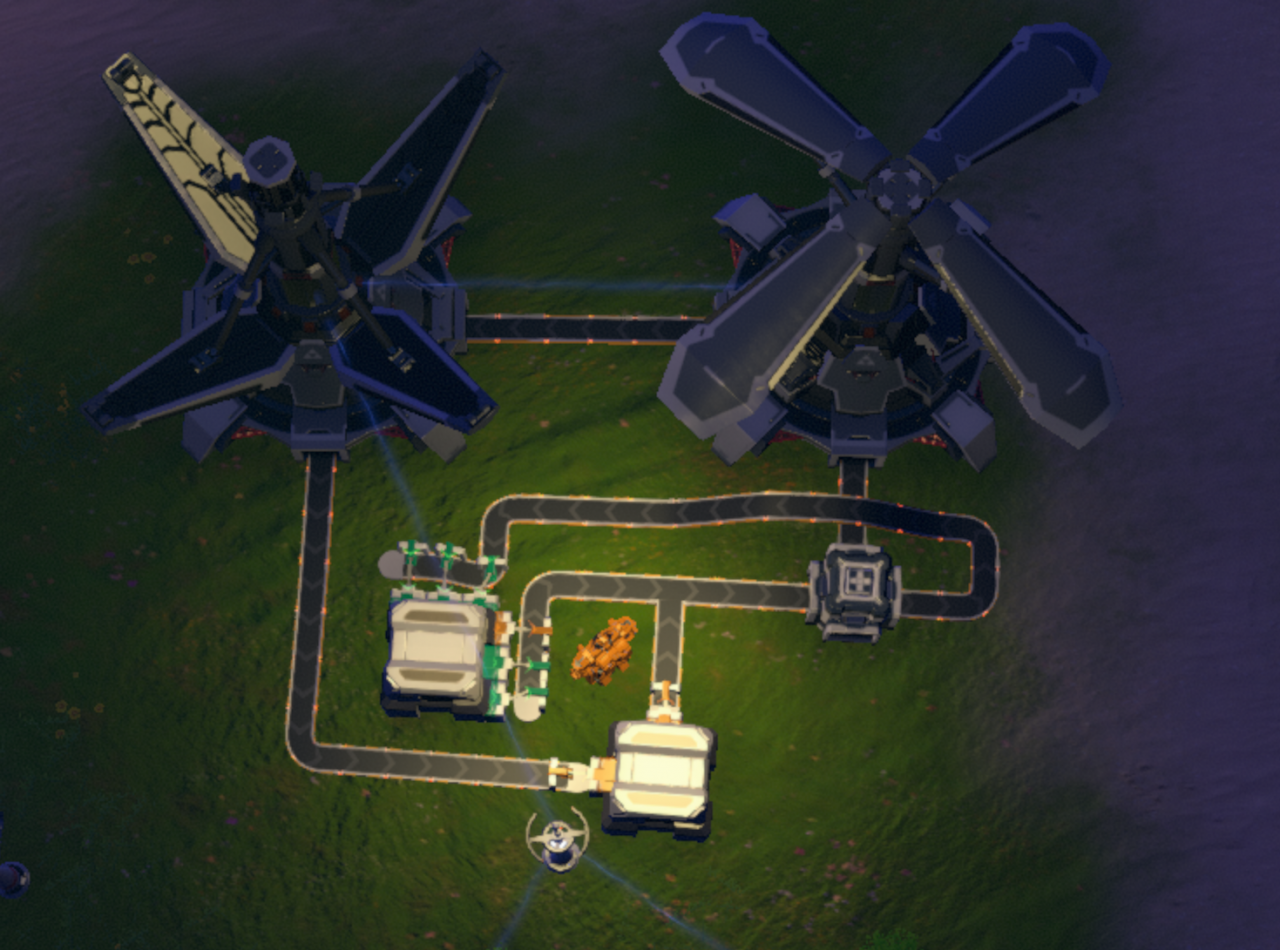 Now it is time to switch it on. 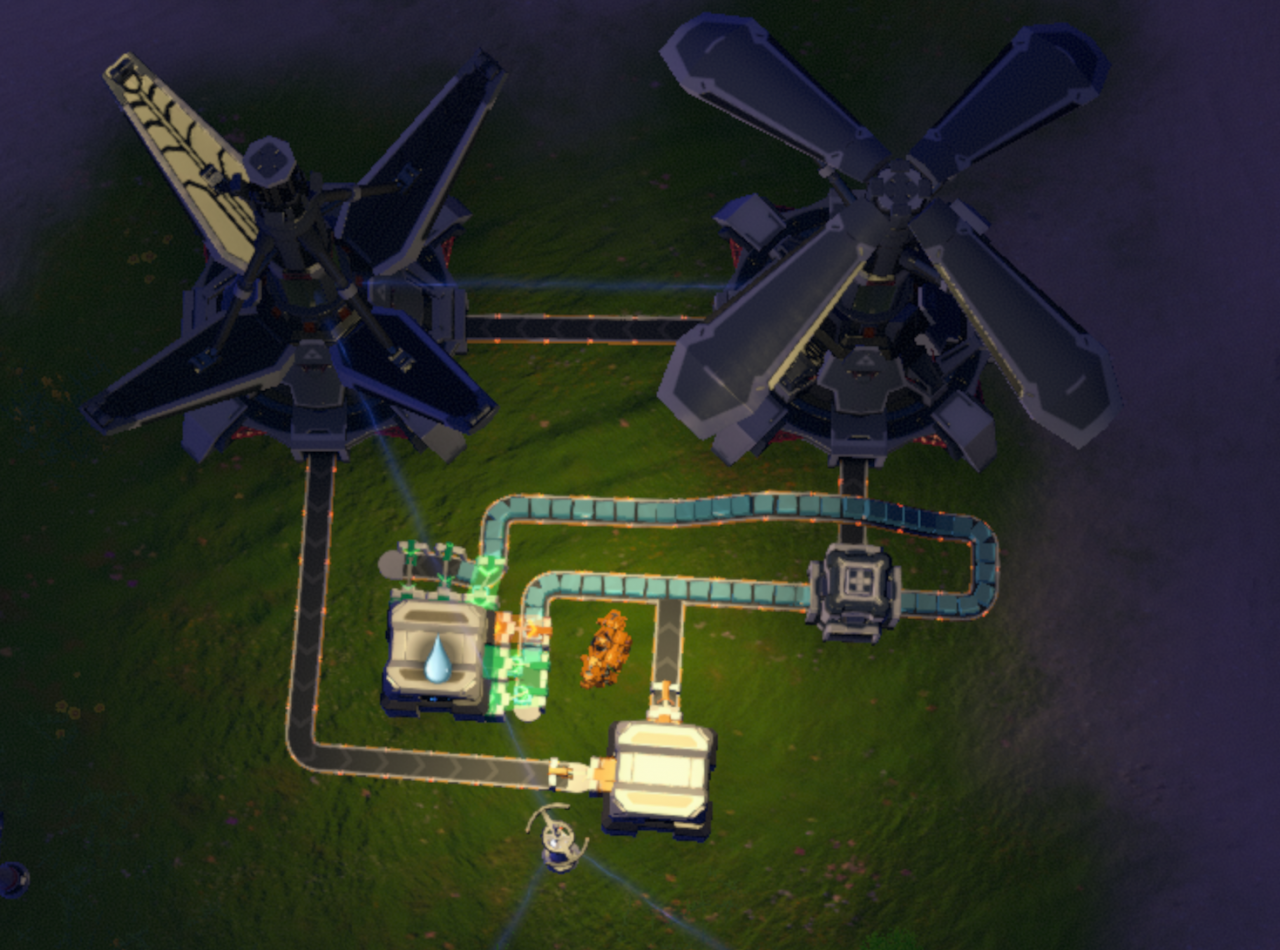 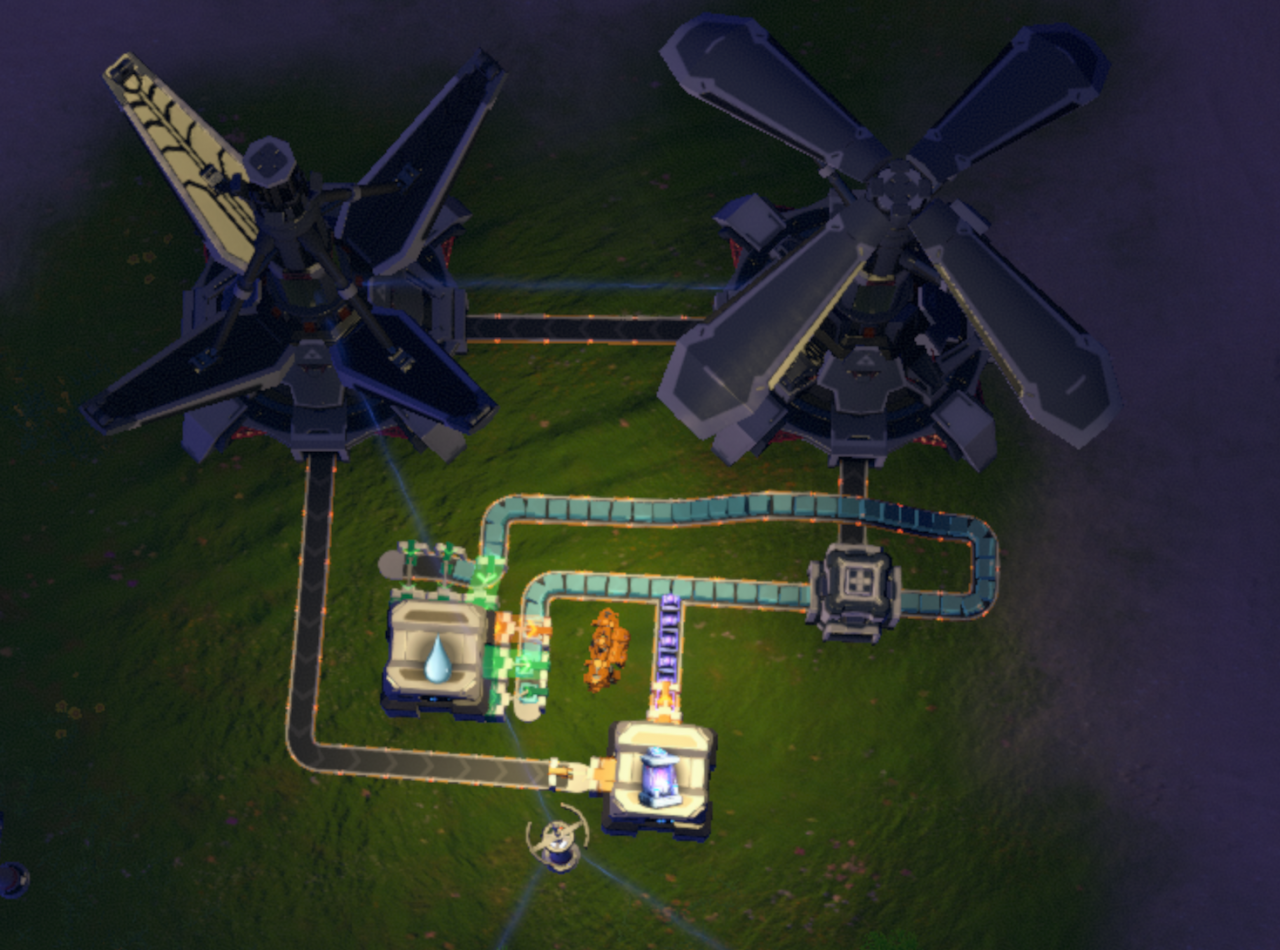 The system is armed and ready.
By qcs2017