While this is a guide for how to get every achievement in the game I HIGHLY suggest you play through blind and then try and get achievements after. Anyway let’s get on with the guide.

These don’t really fall under any particular category, so I’ll go in order of how early you can achieve them.

First Contact
This is the easiest achievement in the game. You get this shortly after starting 01. Sunlight for boarding the space station for the first time.

Greetings, Viewers
This is also done on the first level 01. Sunlight.
There should be a camera hidden here: 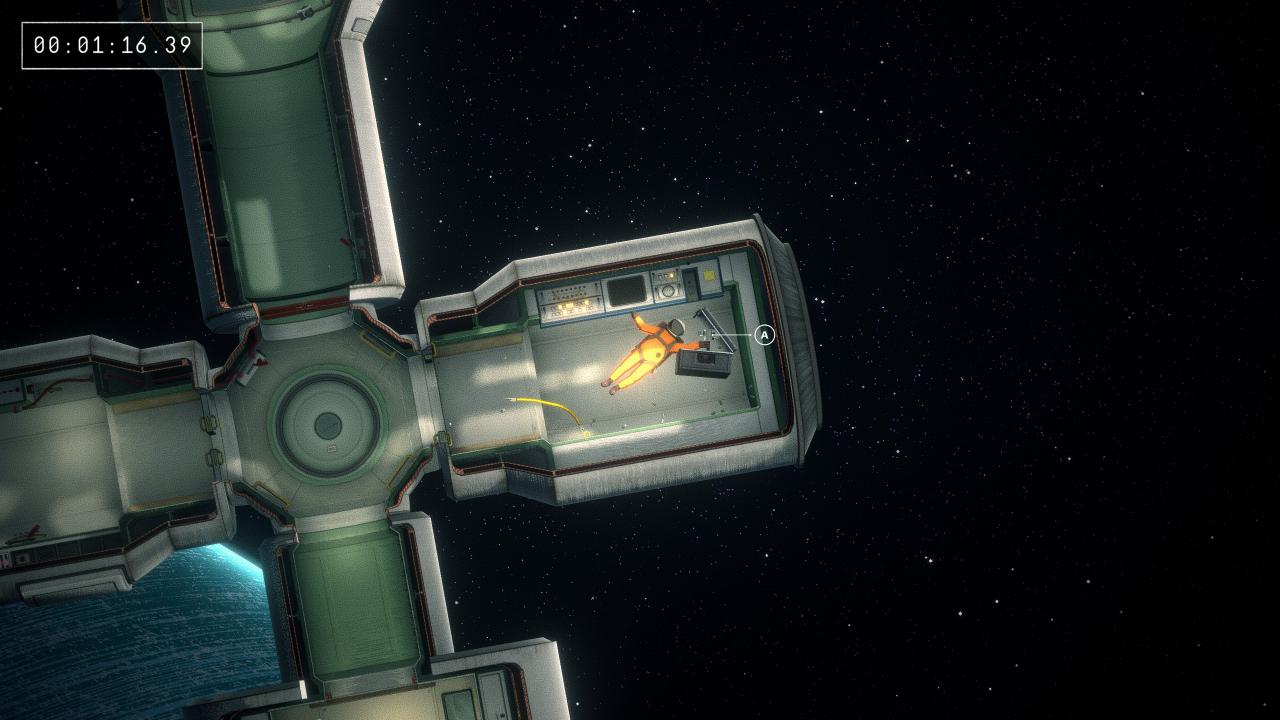 simply grab it and turn it on with “a” and turn it to face yourself and it should unlock.

Safety First
Another easy/unmissable achievement. You get this when exiting the airlock normally for the first time in 01. Sunlight.

A Minor Incident
Slightly more challenging but not by much. This can be done directly after Safety First.
While in the airlock with the inner door sealed and the outer door open. Go back to the lever used to open the inner door and pull it like so: 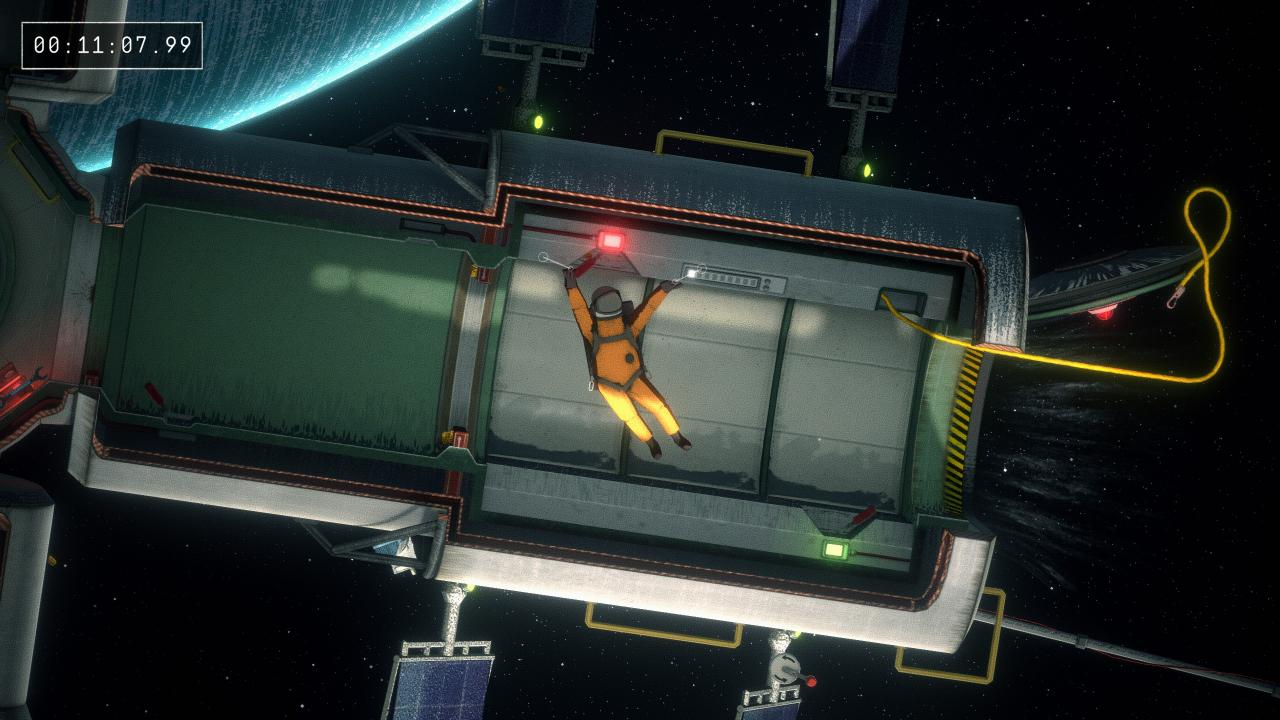 This causes an explosive decompression leading to most of the contents of the space station being sucked out into space. Scary stuff.

Back From Outer Space
This can “technically” be done on any difficulty but you’re just causing yourself unnecessary stress if you do this on anything other than “assisted” difficulty. You get this for “Recovering from a near-death experience”. On pretty much any level, and while in assisted mode fly out into space until WARN: SIGNAL LOSS: appears, and let the number reach roughly 95, like so: 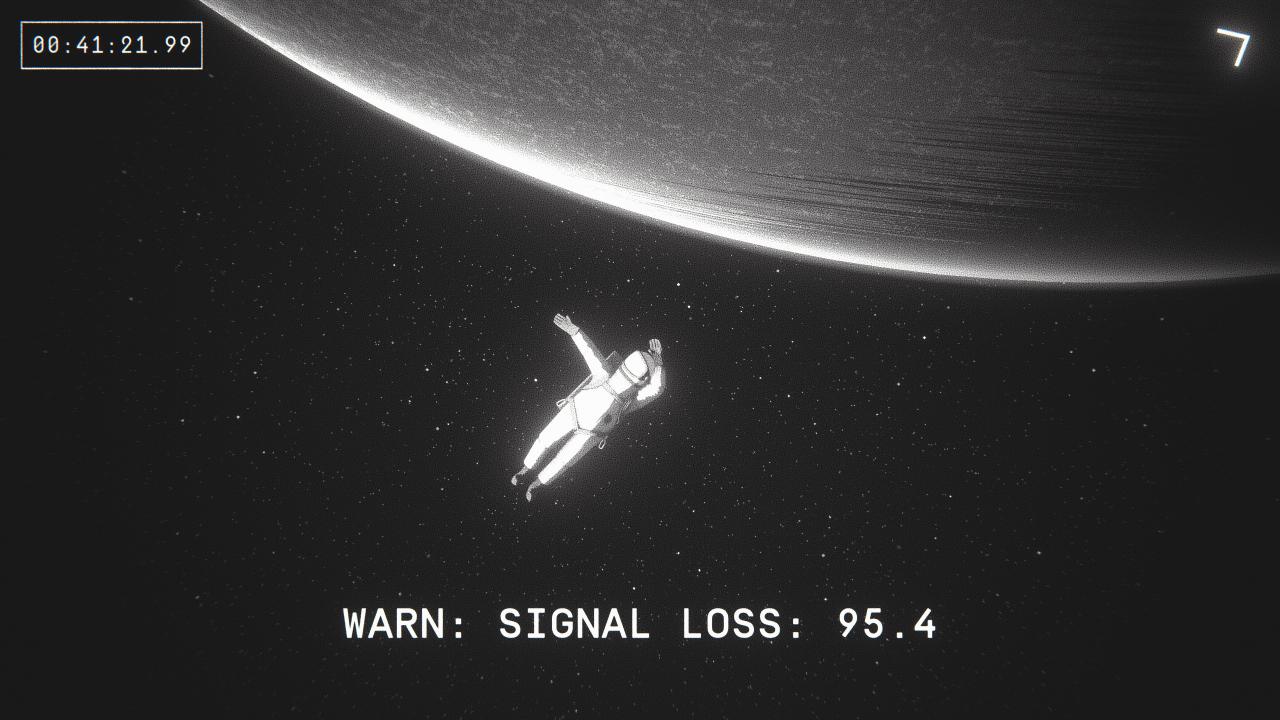 A Classical Mechanic
Another very simple one. Simply complete any level on “Newtonian” Difficulty. If you’re going for 100% completion you’ll get this while doing the optional challenges for any of the levels.

Going Up?
This is kind of an annoying one but again, necessary if you plan on doing the all the optional challenges as this is necessary for 03. Vision. Unsurprisingly, this is done on 03. Vision. You need to shove yourself into this elevator like this: 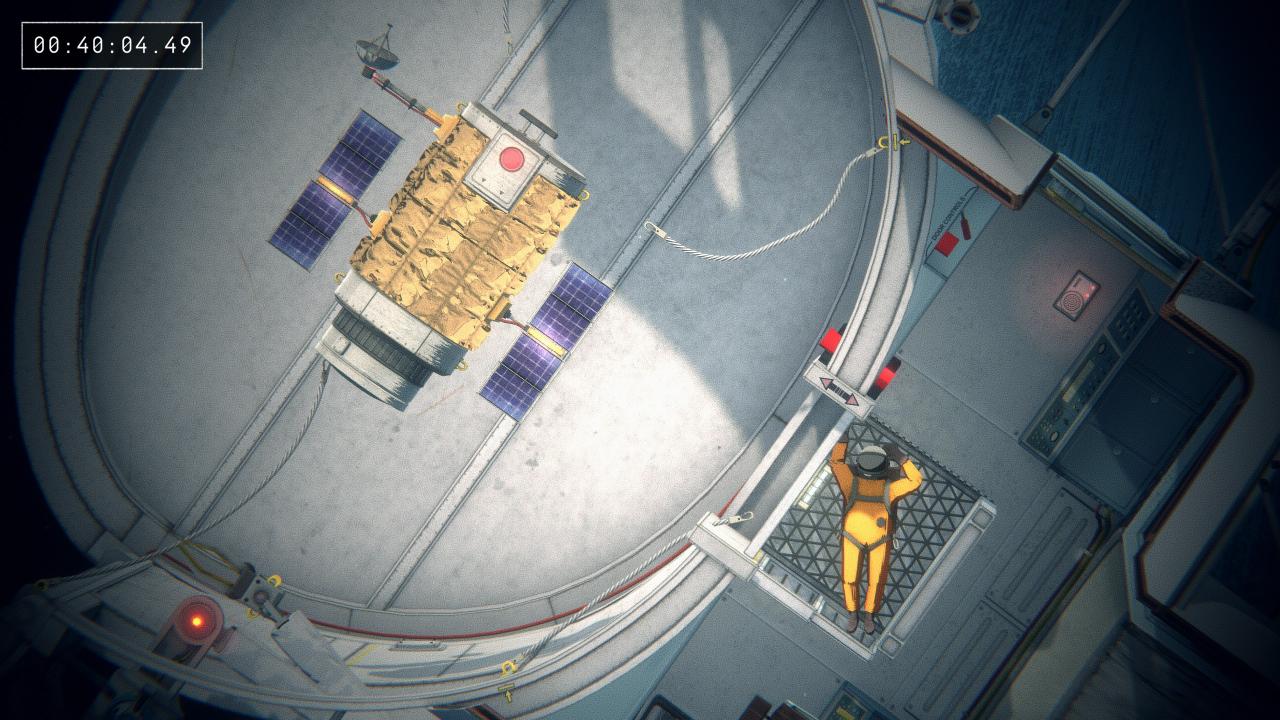 And then either hit the button to move it up into the telescope assembly bay, or manually move the elevator yourself but pulling it upwards with you inside. The first method is easier to me but YMMV.

Charting the Stars
This can be done on 04. Minerals.
Collect this flag from here: 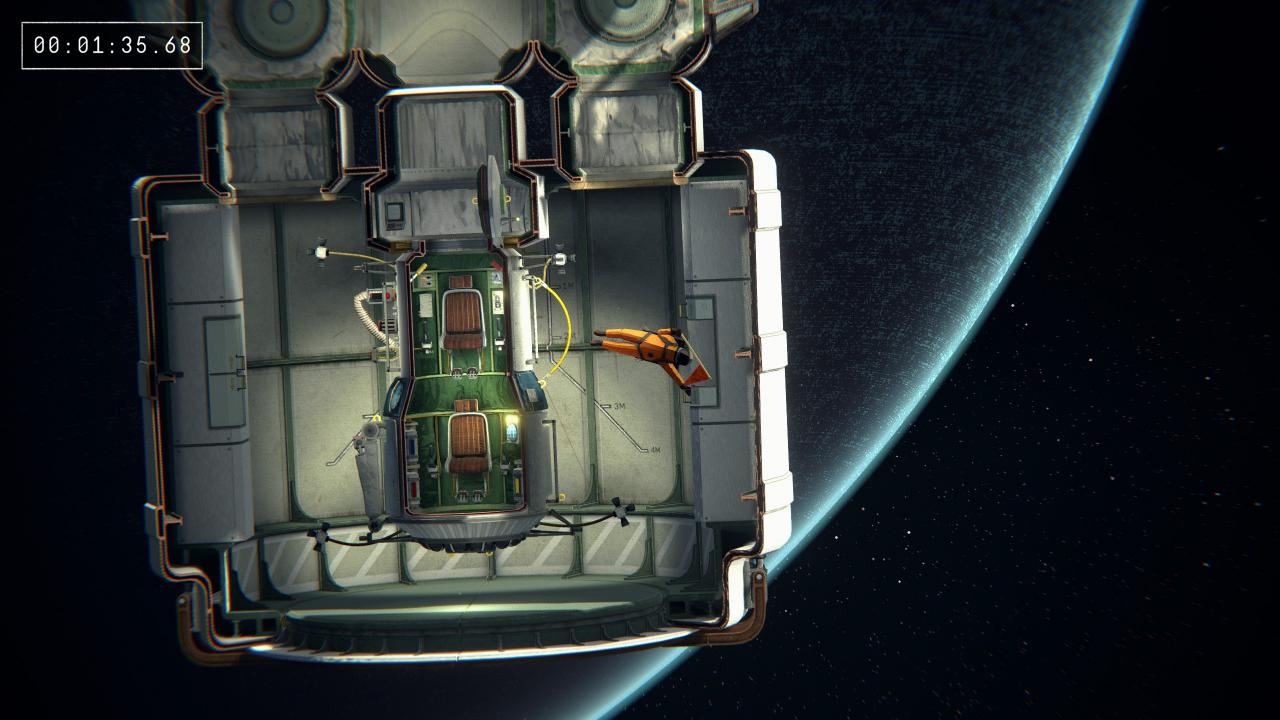 And bring it with you in the mining capsule. Fly the mining capsule to any of the three large asteroids on the map. I suggest the red one as it’s the closest. Collect the flag and plant it on the asteroid. It will probably need a wiggle as it needs to be somewhat deeper than you would expect but keep trying and eventually it will settle and the achievement will pop.

Bon Voyage
This can be done on 05. Oxygen. Progress with the mission until you get access to the next section of the map with the rock crusher and vacuum and such. 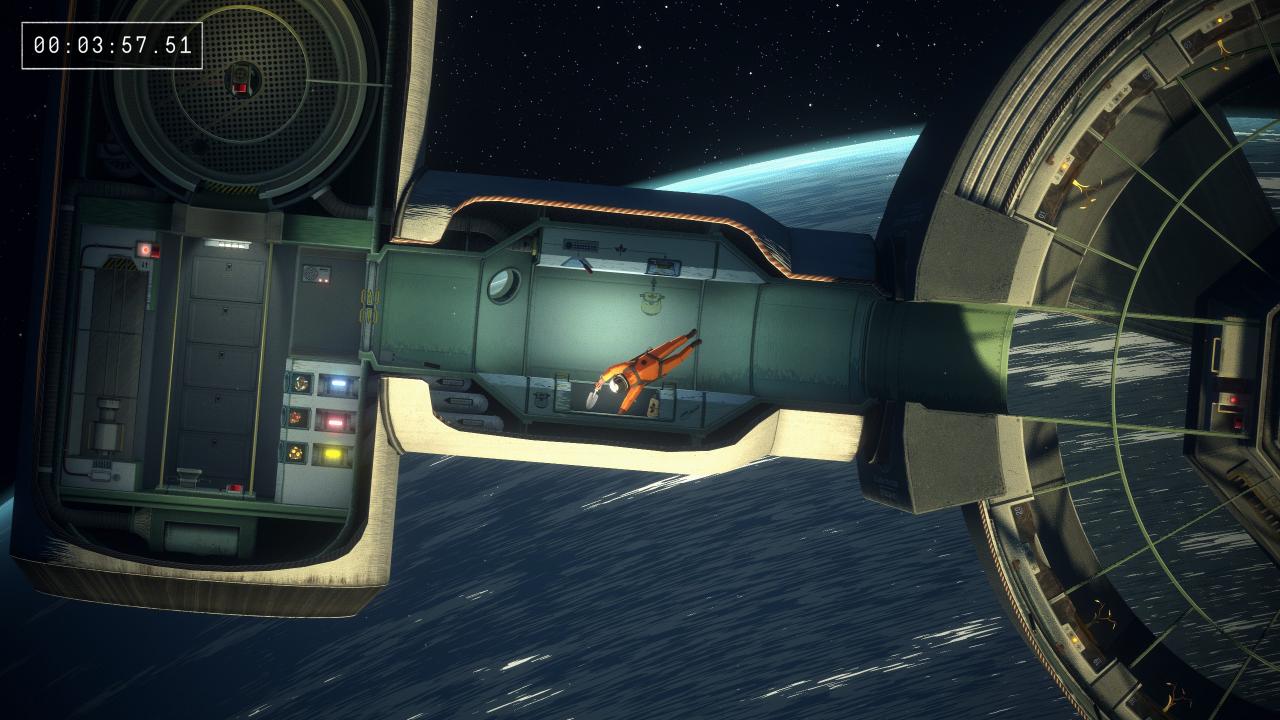 In this cupboard collect the trowel or bag. (Taking the bag will probably necessitate a restart of the level upon completion of this achivement) 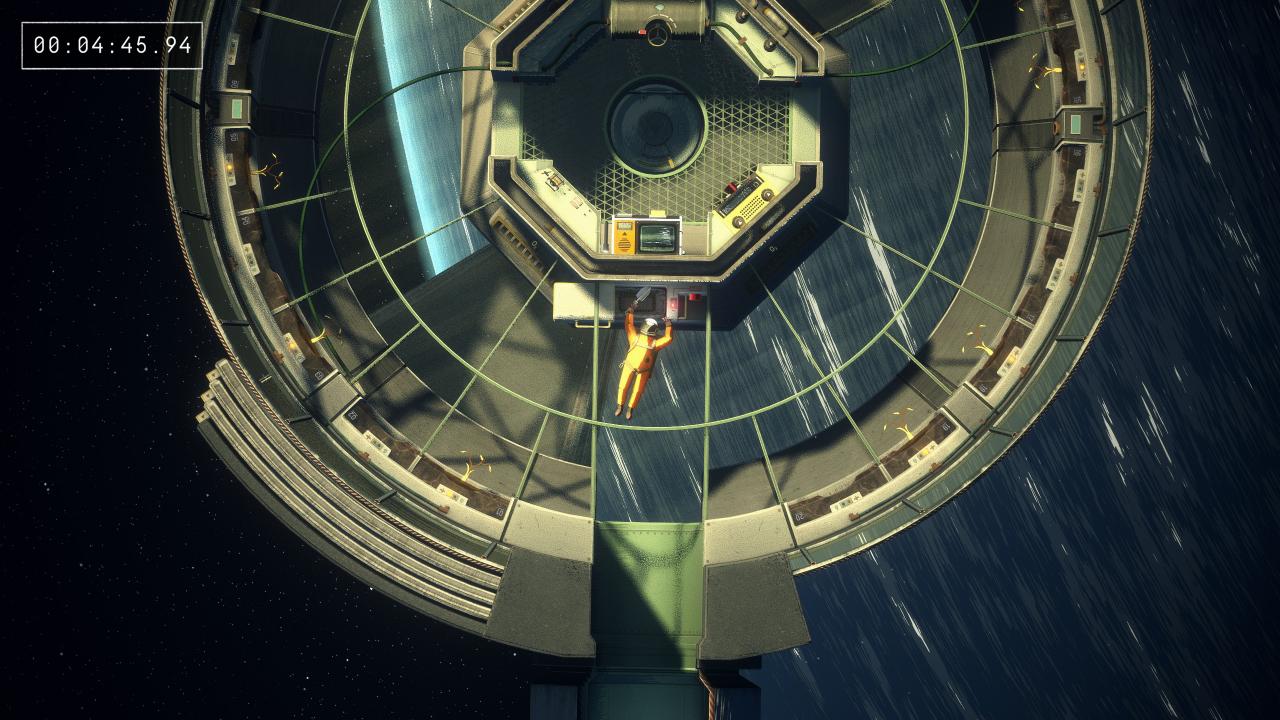 Take it here. Close the door and hit the eject button causing the trowel (or bag) to be ejected out into space, along with giving you this achievement.

Bring Home Gold
This one is done on 07. Evacuation. If you plan on getting all achievements you’ll get this while doing Proud Souvenirs and Last Orders. If you want the location of the trophy scroll down to the mission collectables section for its location.

All of these are self explanatory. You get each one for completing each of the game’s 7 levels. I’ve still included this for completeness.

Not to Plan
Complete Energy.

Proud Souvenirs
Probably the hardest single achievement to do since it involves every level and it can be easy to miss the locations of some of the collectables. Thankfully I’ve already found them for you and put them all in this handy guide! :). While it’s obliviously substantially easier to do all of these in assisted mode, if you’re trying to get all the achievements I’d recommend doing every level the on “Newtonian” difficulty the first time you play it, and while you’re doing that you may as well try and get the collectable along the way.01. Sunlight 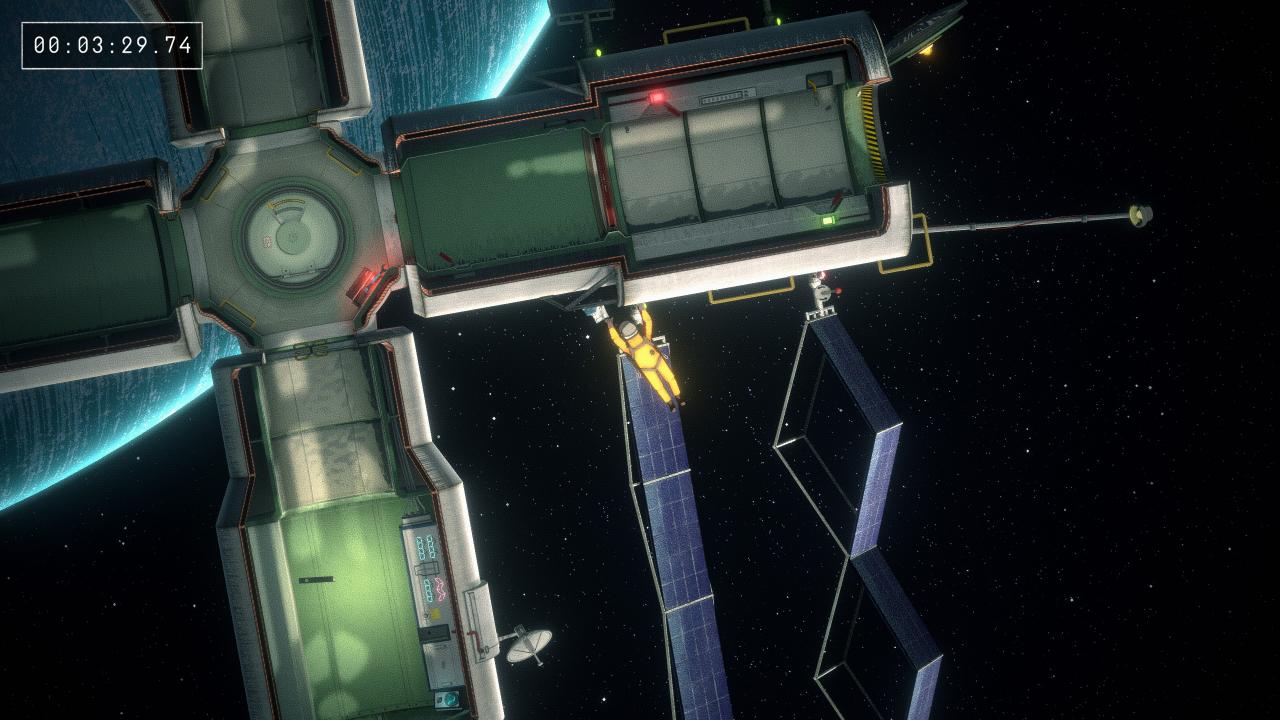 This is probably the easiest collectable both to find and bring back, which makes sense since it’s the first level in the game. 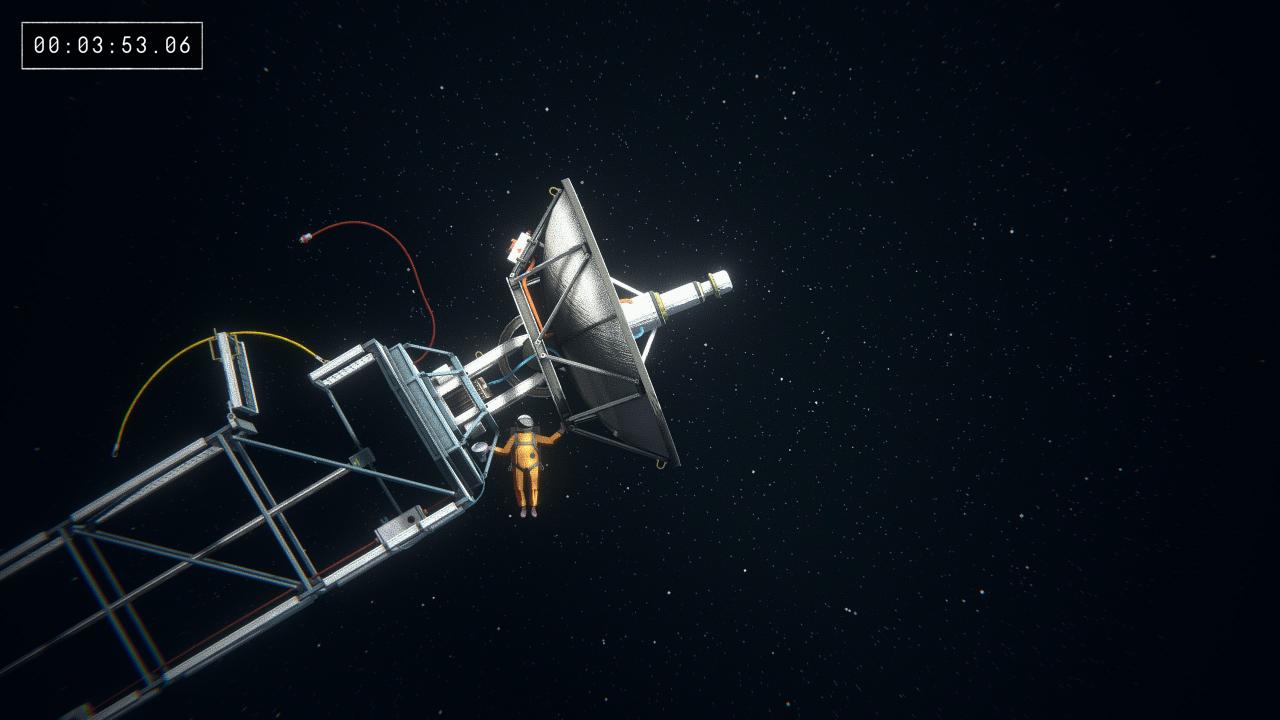 This one can be found here at the very end of the tower. Pretty easy to find and not terrible to reach if you collect all of the ropes and tie them together. 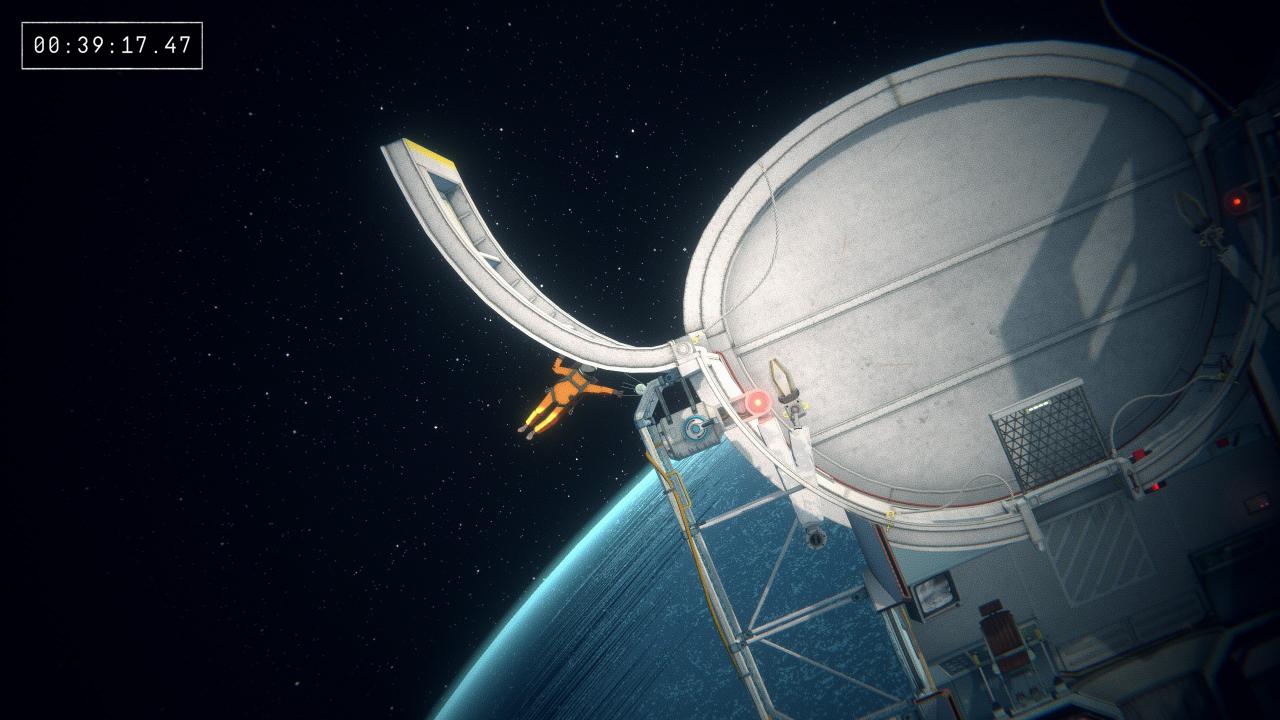 To get this one you need to go through the telescope elevator just like while doing Going Up?.
Not too bad to do on Newtonian since you can connect enough ropes found in the level to do this reach this collectable while still attached to the space station. 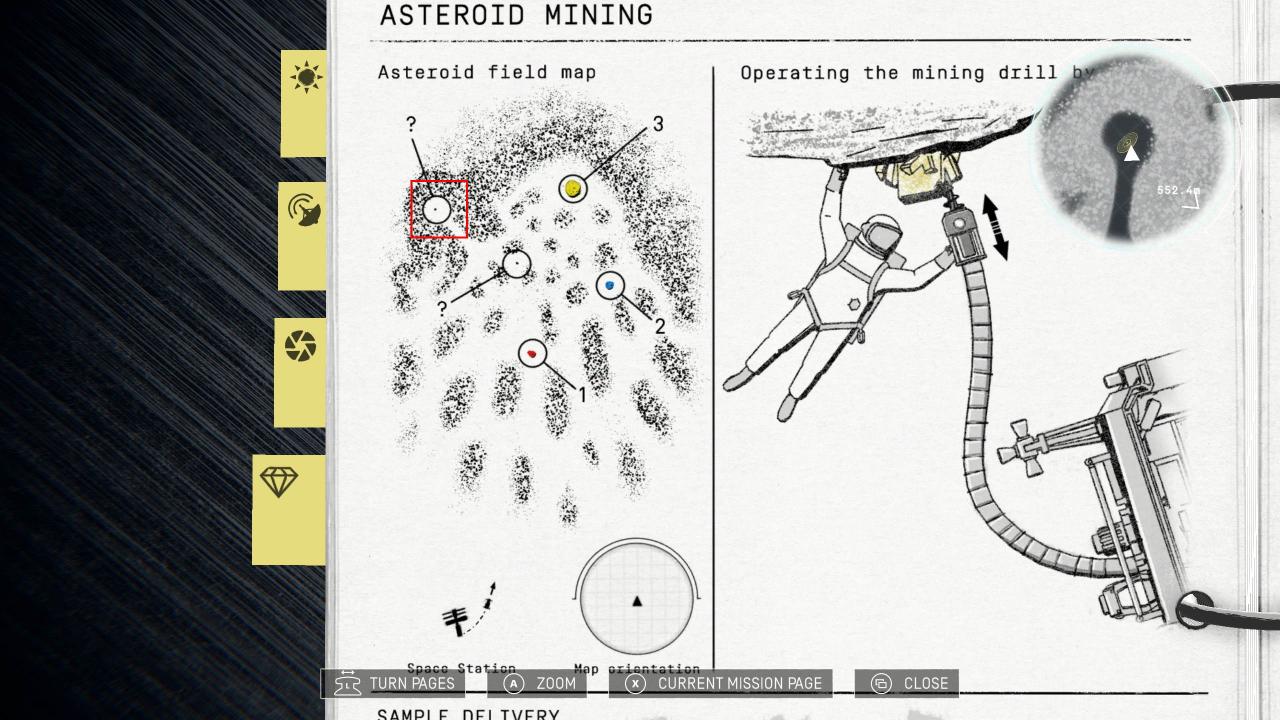 Two screenshots for this one. It can be found here on the map 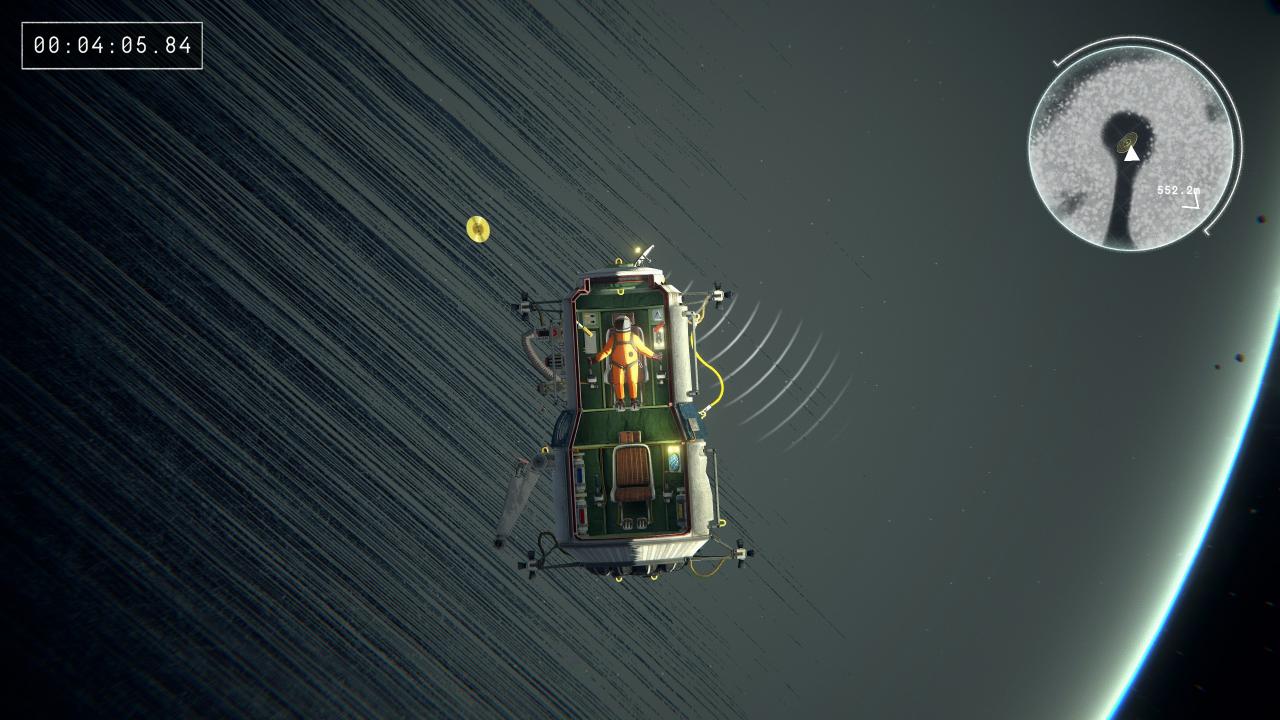 Not hard to find really as the map literally tells you where it is but it’s pretty damn hard to get, or at least was for me the first time. if you park the mining capsule close enough to it, and grab it while attached via rope to the mining capsule it’s fine, or again if you play in assisted mode. 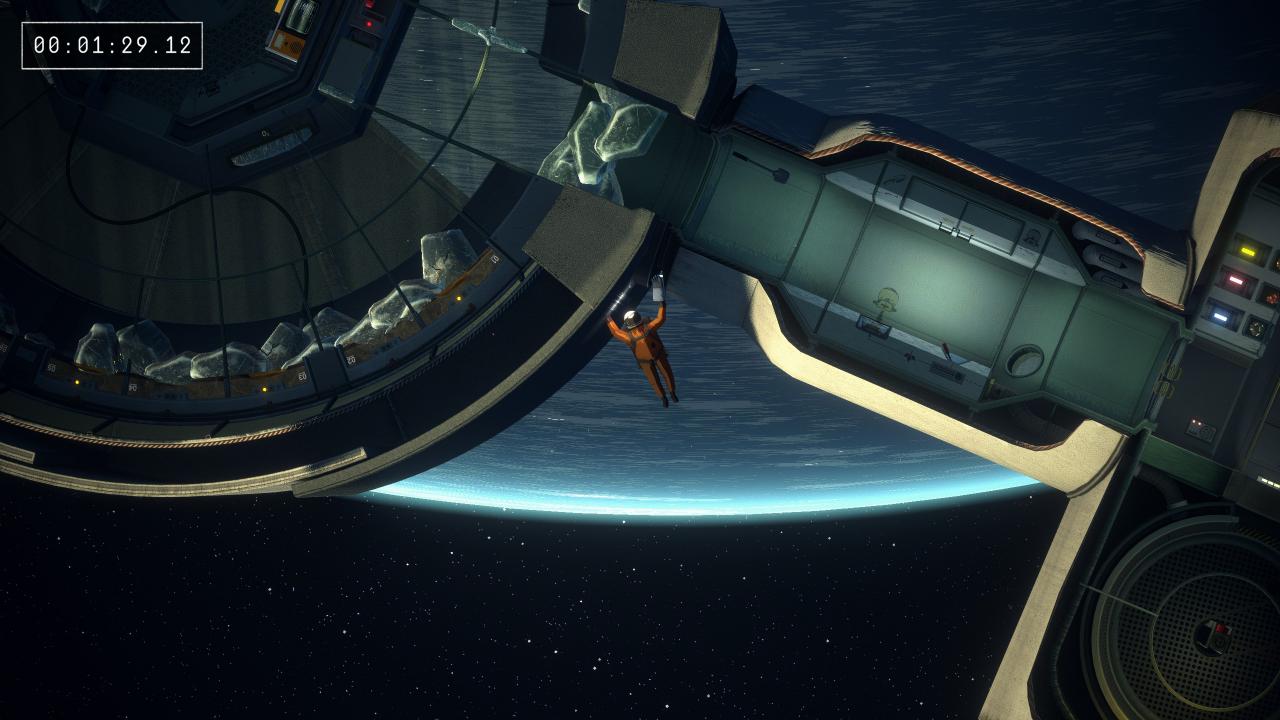 Not a terribly hard one to find, but oh boy did I float off into space a whole bunch of times trying to bring this back inside the space station navigating around the circular dome with 1 hand on Newtonian mode. 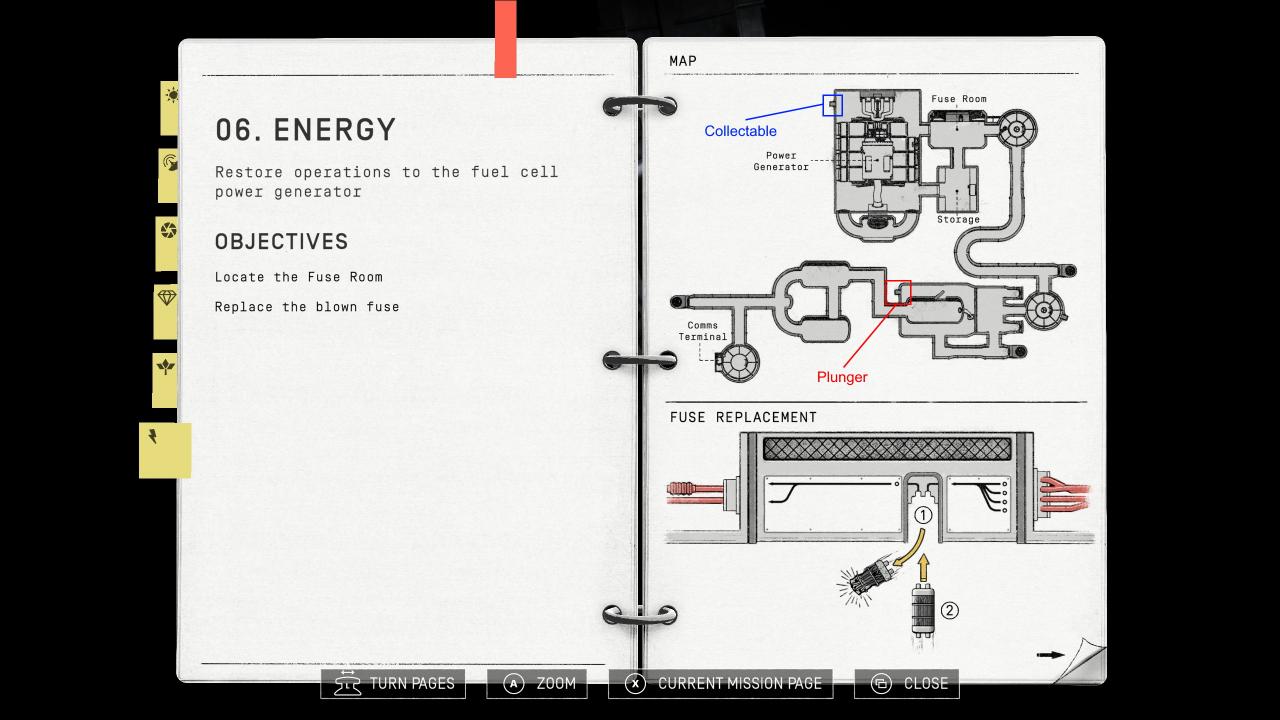 One with three screenshots this time :o. Probably the hardest collectable to find. The two places highlighted on the map show where to get the plunger, and where the collectable is located. 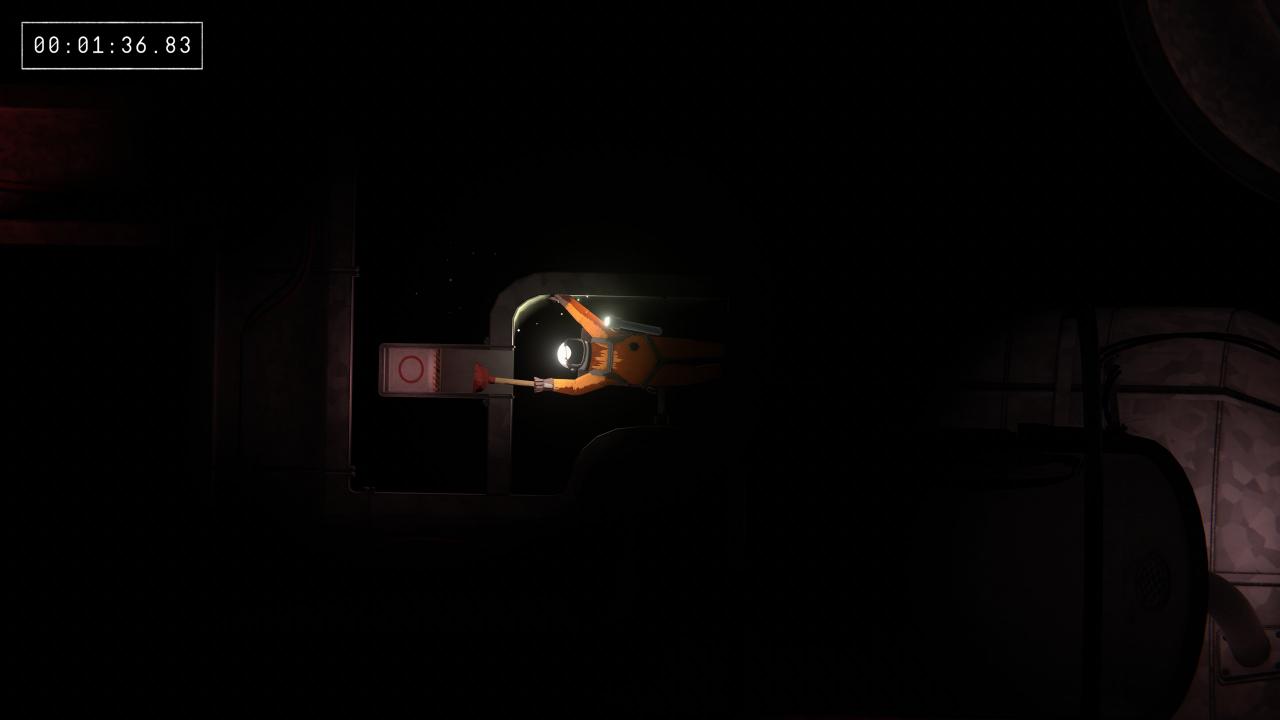 Follow the map until you get here and get the plunger and attach it to your tool-belt. If you’re unlucky it may get stuck to the vent opening and it’s a real pain to pull off. It may also get stuck on the walls as you move along through the vents but it can be unstuck if you grab the plunging end and pull it off sideways. 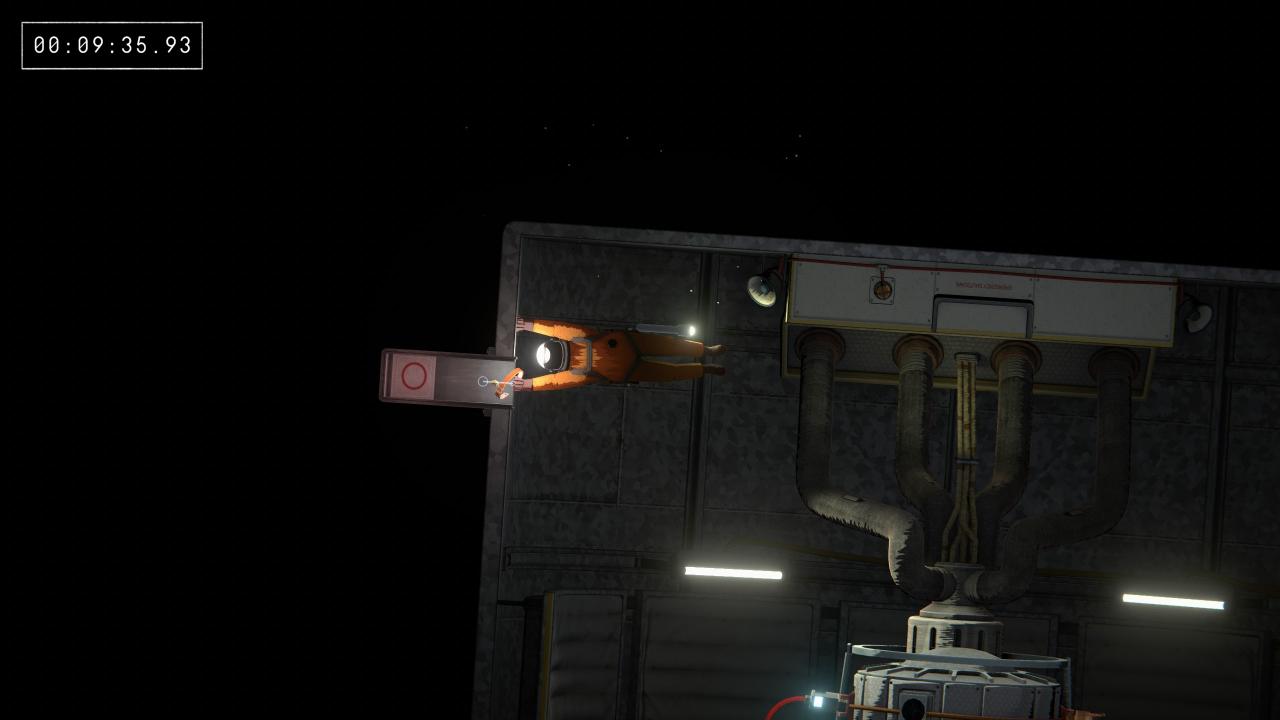 Take the plunger and use it to remove the vent cover, causing the collectable to fly out. It may fly somewhere off-screen, but if you’re fast you can catch it before it goes anywhere. If not just spend a while checking all the rooms and you’ll get it eventually. 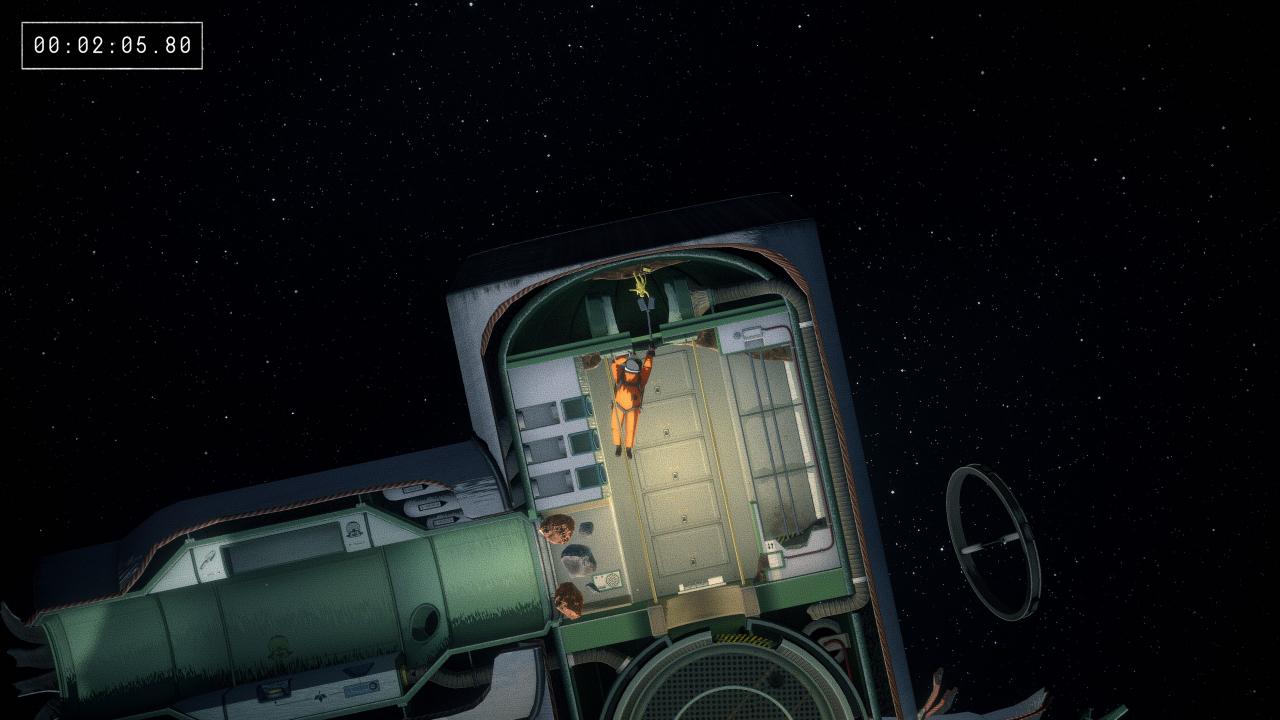 This one isn’t too hard to find, quite frustrating to fish it out with the grabby tool thing, and it’s a little bit hard getting it to the end but it’s very doable.

Last set now, these vary greatly in difficulty and how long they take to do, but they’re all doable. Every level always has these two challenges: “Find the hidden collectable” and “Complete the mission in Newtonian mode”. “Find the hidden collectable” usually requires you to bring it to the Comms Terminal where you normally receive the guide on how to complete the level but this does not apply on levels 06. Energy and 07. Evacuation. in 06. you just have to find and touch the collectable, and on 07. you have to bring it to the escape pod instead.

This one isn’t too bad, the tennis rackets are found in the cupboard with the crowbar stuck in the opening. It takes a bit of wiggling to get them into the opening of the airlock, and it can be easier if you use one arm to pull the door open a bit and another to wedge the racket it, but keep trying and you’ll get it eventually.

Assemble and calibrate the tower in under 10 minutes is by far the hardest challenge in the entire game. If you’ve played this game for more than 5 minutes you know that easy and fast movement are not what this game is for. There are quite a few tips and things you can do to make this easier.
1. Go to the settings and turn on the in level timer so that you know exactly how long you’ve taken.
2. Play the level a few times so you exactly where you have to go and what to do
3. As always play on assisted. This lets you fix mistakes far easier and means you don’t need to bother tying yourself down as you can simply fly back to the station
4. You can connect the power to the winch, and while it’s moving the tower into place you can do other things like connect wires and assemble telescope parts.
5. I liked to build the tower first, then use the signal TV thing backwards, going from the huge tower at the end to the smaller dishes last.
6. Don’t give up! This is by far the hardest thing to do in this game so don’t worry if you don’t get it the first time.
If anyone else has any tips please let me know.

Not super hard. The hardest part is remembering not to do anything with the crane arms. The way i did it was by never doing the objective of fixing the arms with a wrench. You’ll spend a lot of time messing around with the elevator but this shouldn’t be too hard.

Bring an asteroid back isn’t hard at all as there are thousands around the place. Just make sure to pick a small one as if it’s too big it can bump you and knock you around or even open the hatch to without you wanting it to!
I’ve already got a guide for redeploying the space telescope here by ApatheticKermit.

Growing a plant specimen in every bay is extremely easy, just repeat the process you used to plant 10 specimens, and do it for the other ten bays. Nothing more to say about this.

Thanks to ApatheticKermit for his great guide, all credit to his effort. you can also read the original guide from Steam Community. enjoy the game.