This is a deep dive into the mechanics and use of tactical missiles in Highfleet.

The missile sensor only goes active when it gets to within 100 km of the target point or when it loses SARH tracking (see radar guidance section).
As mentioned, you can click on the map to select a target. I recommend that you use the compass tool to draw a circle with 100 km radius at the target point first to get an idea of when the sensor will turn on.

For example, if you select the middle of this 100 km radius circle as the target, the missile sensor will turn on as soon as it hits the edge of the circle or 100 km prior to reaching the target. This is important to note when calculating a beyond radar range shot since you want the sensor to activate and pick up the enemy before it flies by.
All missiles will continue to fly past a designated target on the map if they don’t seek onto a target until they run out of fuel or find a target to seek on.

Certain missiles such as the P type radiation seekers will go to last known location of a radar emitter should it lose track and if it does not pick up a new track, will detonate without flying past. Against AI this should not be an issue in general since they do not turn off their radars.

The 3 tactical missiles available at time of writing come in 3 flavors:

In Practice the Kh-15 and A-100 are the missiles you will encounter in the campaign and use. You may design a ship to use R-3 missiles in the ship editor, but it has no guidance capability and can only be used to hit stationary targets landed in towns. Note at time of writing you can fit two R-3N in the space of a 2×4 hull section; no doubt a bug, but don’t let me stop you from nuking everything.

Tactical missiles have 2 general families of guidance: Radar-Guided or Radiation Seeking (P type).
The R-3 is ballistic only and features no guidance.
Radar Guidance

SARH-mode:
If you click on the red diamond target within the yellow circle of any of your fleets, the missile will use SARH guidance. This means it will guide to target using a fleet’s sensors as soon as you launch it and continue to track as long as the enemy fleet is within the range of one of your fleet’s yellow circles. A red line going from missile to the target indicates a good lock and track.

Note that the yellow circle range is minimum 100 km radius (optical camera based tracking) and is extended further based on ‘Tracking’ range stat of the ship. Tracking stat is based on ‘F.C.R’ module type and positioning on the hull.

Should the missile lose track of the target due to it being out of the yellow circle, it will go ballistic and switch to ARH mode. 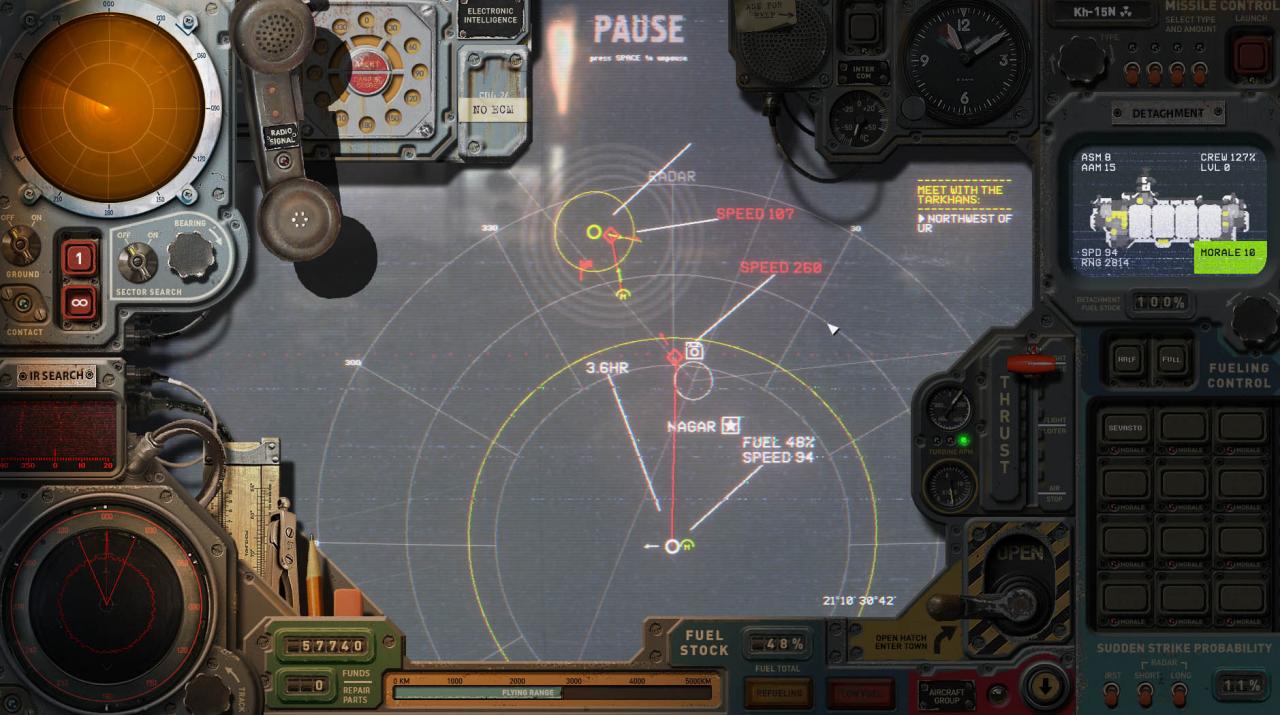 – Example of SARH engagement against two separate targets, Notice how separate fleets can buddy track for the launcher fleet beyond their yellow circles range! –

ARH-mode:
The missile goes to this mode when ever the missile arrives at the location on the map you clicked (see targeting section for details on sensor activation) or it loses SARH track and switches to this mode. A red cone will be in front of the missile to indicate the ARH mode.

The missile is ballistic in this mode until an enemy or friendly fleet intersects the red cone of the missile. Once a target is detected, it will lock on and self guide to impact. This mode has no capacity to detect friend or foe, use caution!

A missile in this mode can be jammed, this causes the cone to shrink to half size and is easier to dodge. 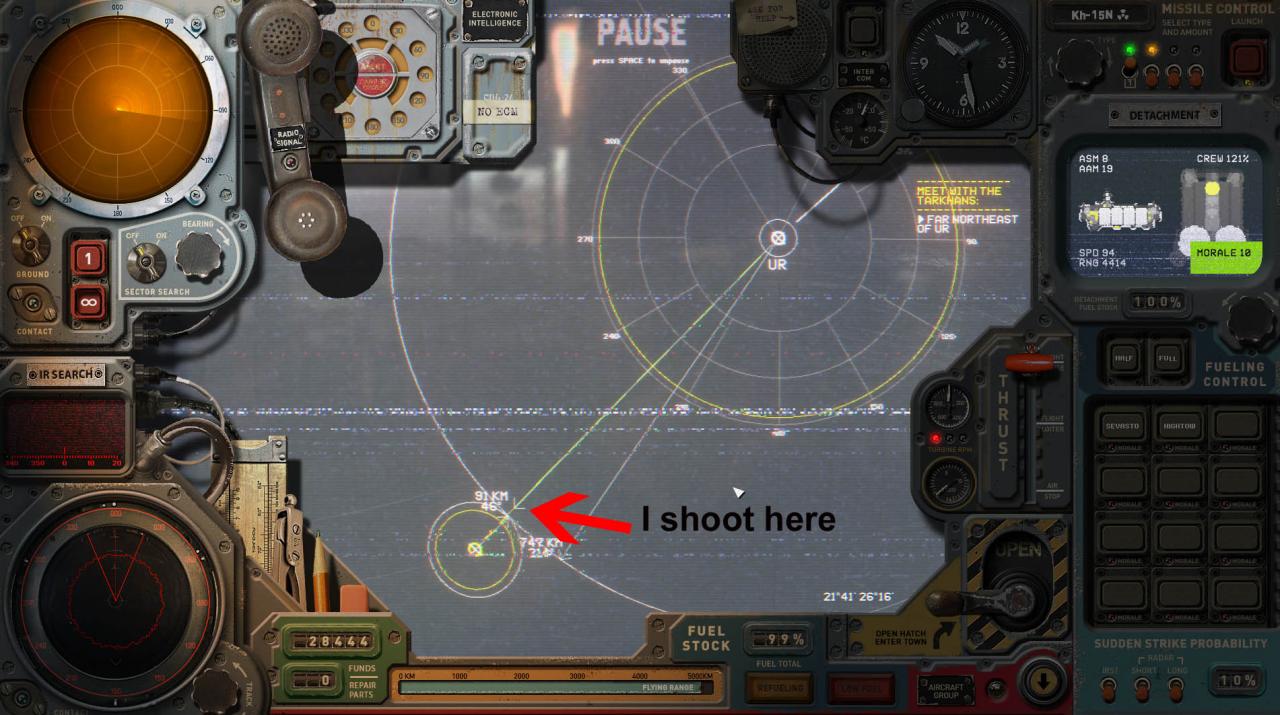 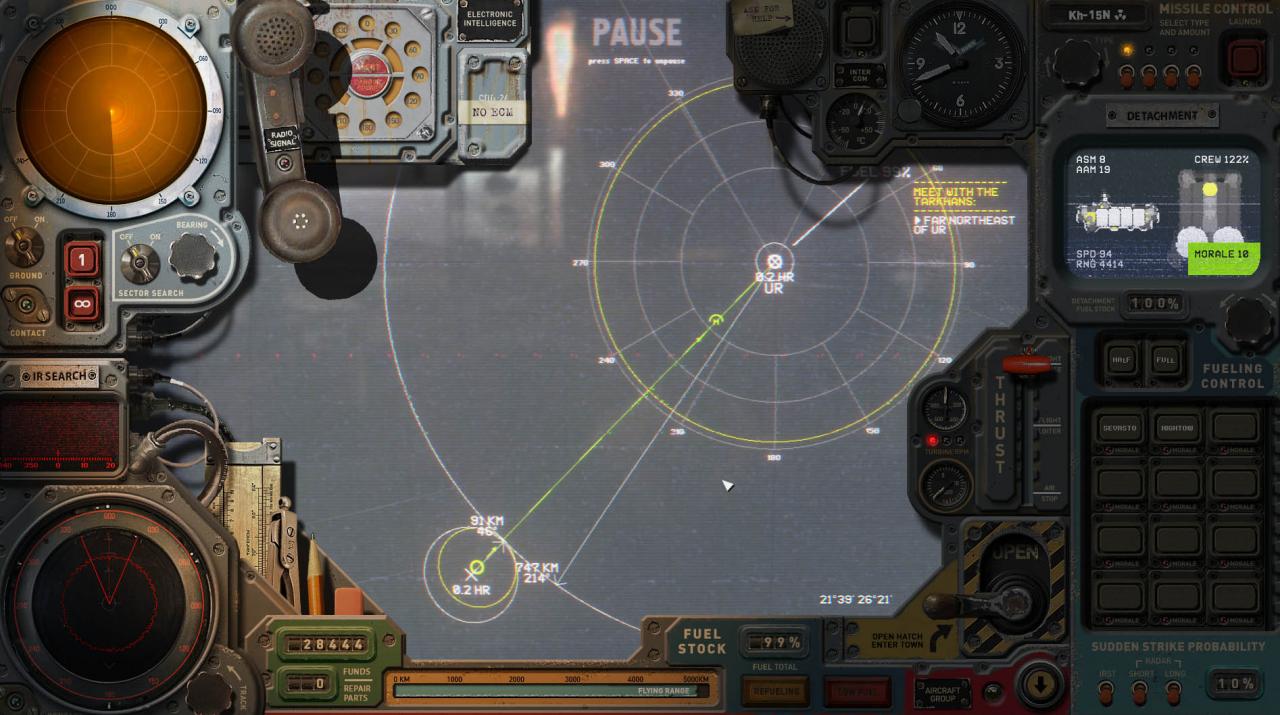 – Missile is ballistic and en route – 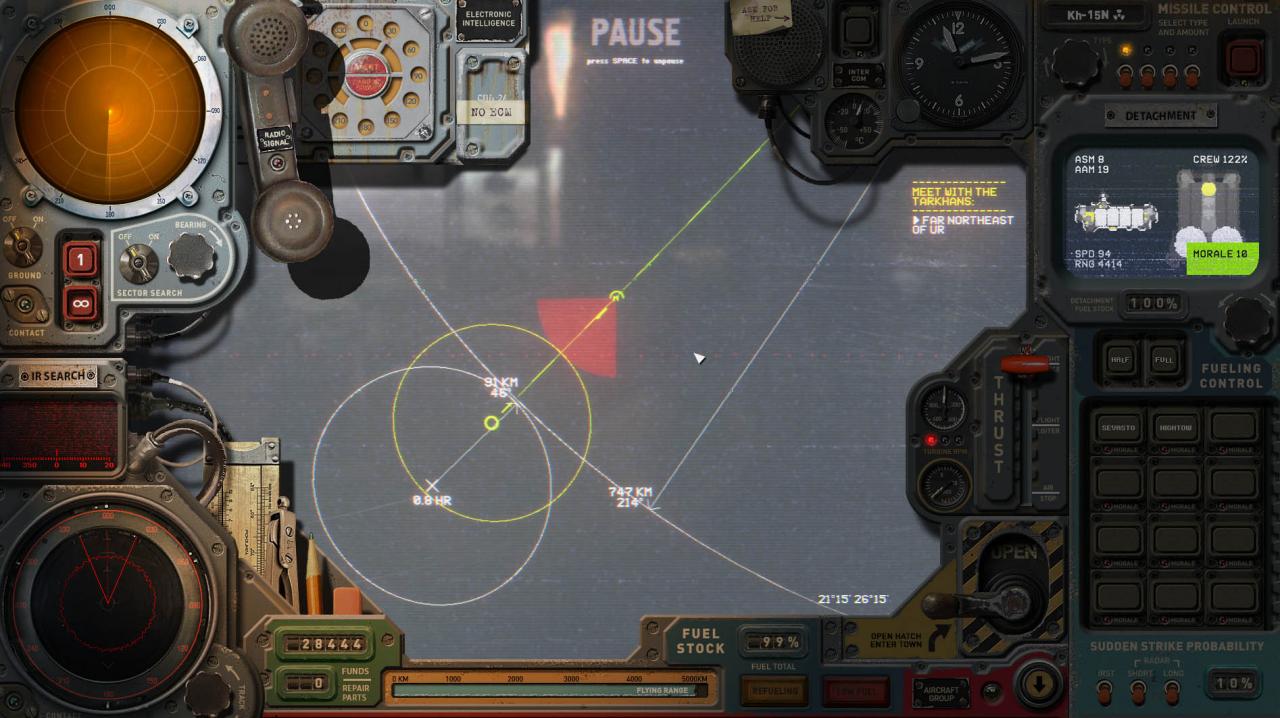 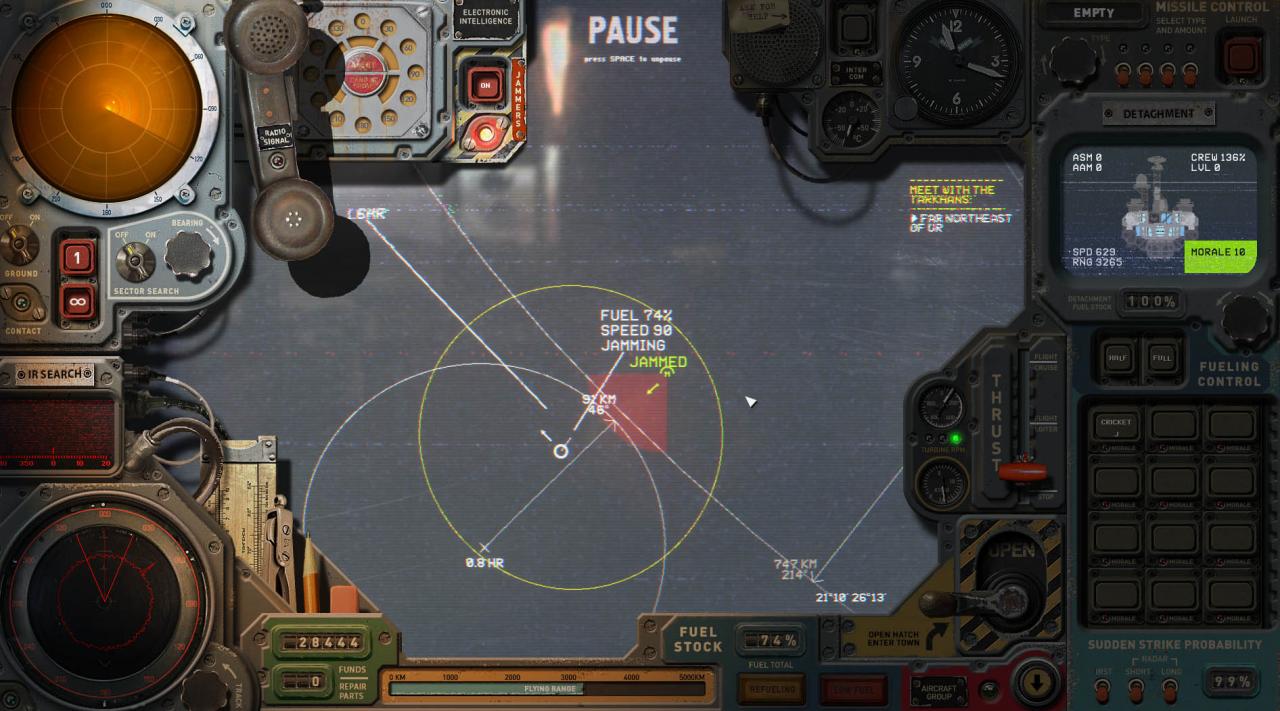 – Missile is jammed and the cone goes to half – 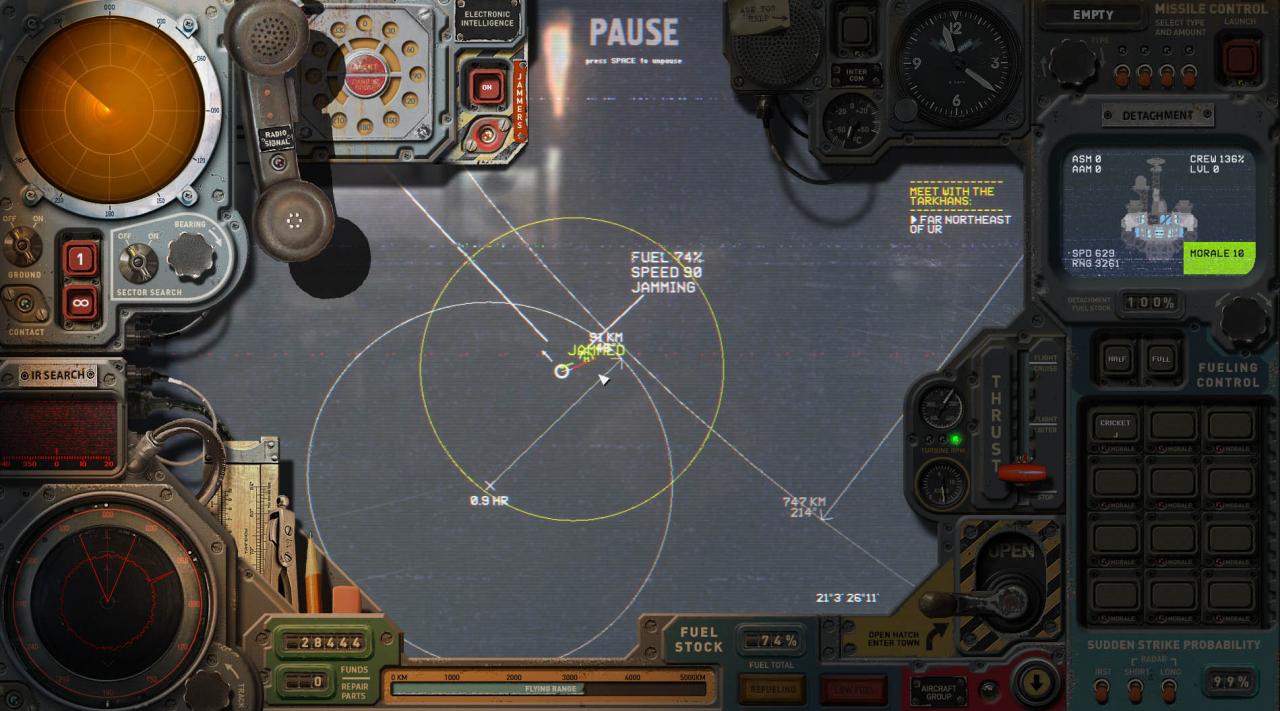 – Missile detects the target and locks on for the intercept –

Kh-15P and Kh-15PN operate in this mode. These missiles will home in on radar or jammer emitters, that is to say they home in on the radiation sent out from these sources including your own.

Warning: they can track onto your emitters so turn off radar and especially jamming when you launch to be very sure not to shoot yourself in the proverbial foot.

Radar Seeking Capability:
The range of the missiles radar tracking is 100 km from the missile denoted by a red circle once the sensor turns on. Any fleet in the red circle with Radar on will be locked by the missile and intercepted. The missile can even do a full 180 deg turn to track a radar signal if it can!

If the radar being tracked is shut off it will go ballistic to last known location. Missile will terminate in that spot unless it gets a new lock.

If a choice between two radars is possible it will choose the stronger one or the closer one, it is very hard to test this and be sure if it’s radar strength or range to radar that makes the difference; it should not matter in practical use against the enemy if your radars are off. 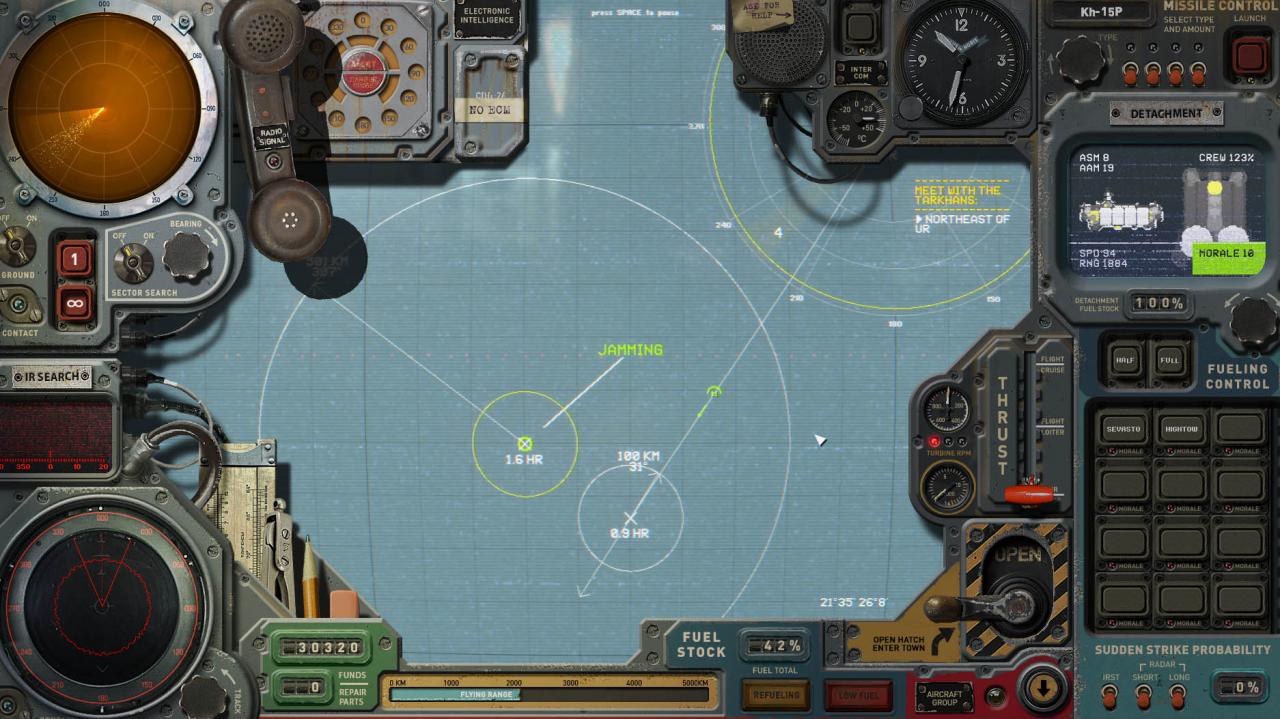 – Notice the inbound missile is ballistic with sensor off and the target is jammer on, the circle is a 500 km radius from the emitter – 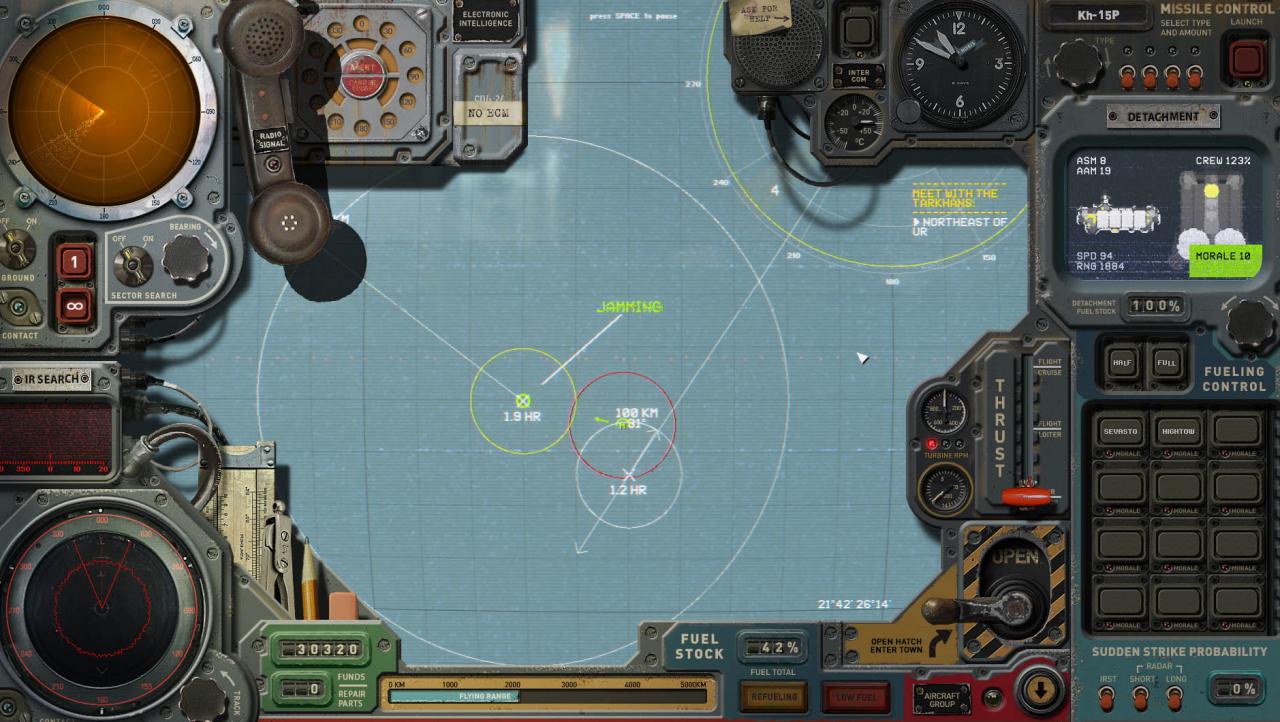 The missile will not track anything in a ballistic-sensors off mode, once the red circle is visible it will track jammers and then radars otherwise it remains ballistic until it finds an emitter or runs out of fuel.

Thanks to calacorm for his great guide, all credit to his effort. you can also read the original guide from Steam Community. enjoy the game.