HOT WHEELS UNLEASHED™: How To Obtain the Deora

How to unlock and obtain the original Dodge Deora in Hot Wheels Unleashed! 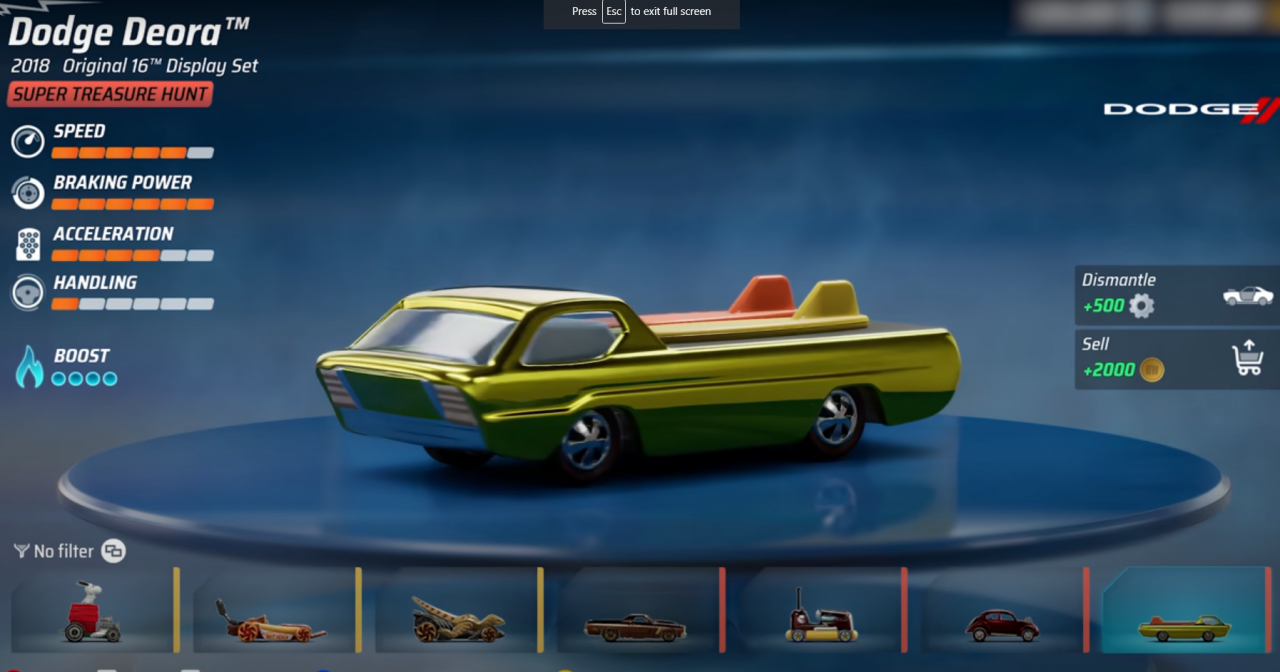 So, you want the elusive Deora, eh? Amazingly, Milestone has actually managed to throw it in the game as a STH, or Super Treasure Hunt. STH is a super rare drop category from the blind boxes, or as legend tells, will appear rarely in the shop for 2000 coins.

Now we’ve all shared struggles of opening blind boxes only to get duplicates of cars we already own or don’t want just chasing down the elusive few, but fret not, this is exactly the same! That’s right, life sucks and you’re gonna have to pray to the good ole RNGesus for this one harder than you ever have, but you do have some options which I’ll list below.

Step 1: Discovering the Deora
– Because you’re already here reading this, I’ll take the guess you already know about it, so you can move on to step 2.

Step 2: Read a guide in hopes it’ll help
– Now, you’re already doing this one, so I’m proud of you. You’re on the right track.

Step 3: Spend all the coins you have on Blind Boxes
– Yep, go on ahead, I’ll wait.

Step 4: Open the Blind Boxes
– This will go one of two ways, you either get the Deora or you don’t. If you got it, congrats! You’re lucky and I’m jealous. If not, don’t give up hope, you still got some stuff to try.

Step 5: Sell The Dupes
– Nothing new here, frankly, sell your duplicates for coins, and spend those coins on more boxes!

Step 6: Buy More Blind Boxes & Open ‘Em Up!
– Now this is gonna feel a lot like Step 4 did, and that’s just how it is. If you still haven’t been lucky, keep going!

Step 7: The Shop
– As I mentioned, there is a rare chance it’ll show up in the shop. The five cars in the shop will rotate every four hours, however, that timer is only counting when the game is actually running, so you’ve gotta be playing the game for it to reset the cars. This brings me to the next step…

Step 8: Selling Your Soul
– That’s right, you’re gonna have to sell your soul to Unleashed, and never close the game until the Deora shows up in the shop, checking every four hours to see if you got it.

Step 9: Giving Up On Your Dreams
– By now, you probably are still SOL, so it’s about that time that you give up on your dream of owning the Deora. Let’s face it, statistically you were never gonna get it anyway, right? Sure, it could happen, but have you even bothered getting the Unleashed times on all the Time Attacks yet? Exactly. At least if you give up hope, you’ll stop being disappointed. Go on, keep playing the game. Who knows, maybe it’ll come when you least expect it…

Thanks to Zeph for his great guide, all credit to his effort. you can also read the original guide from Steam Community. enjoy the game.