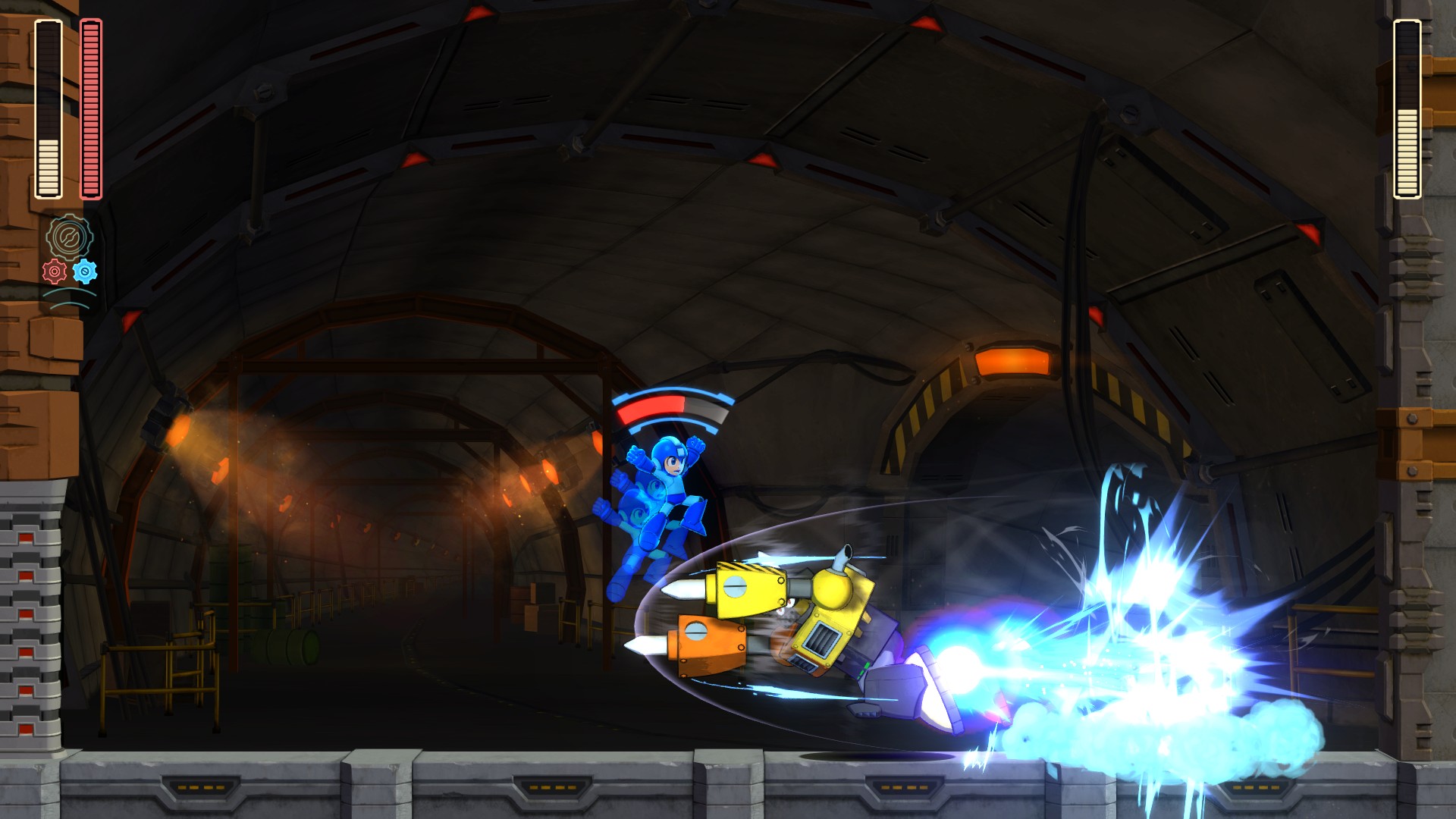 Impact Man consists of trying to impale Mega Man with his drill spikes. Dashing across the room is his main strategy, sometimes jump into the air and turn into a three-sided drill, after which he’ll jump across the room in an attempt to crush Mega Man.He’ll also leave behind a spike wherever he lands, Speed Gear will helps you a lot avoiding him.

When he lost over half of his health, Impact man will turn into a gigantic jackhammer.  In this form, Impact Man will jump around the room and generate massive explosions by slamming his enlarged spikes into the ground. After doing this three times, Impact Man will break apart into nine Impact Brothers who will fly across the screen. Impact Man will then respawn in his normal form and continue the battle. 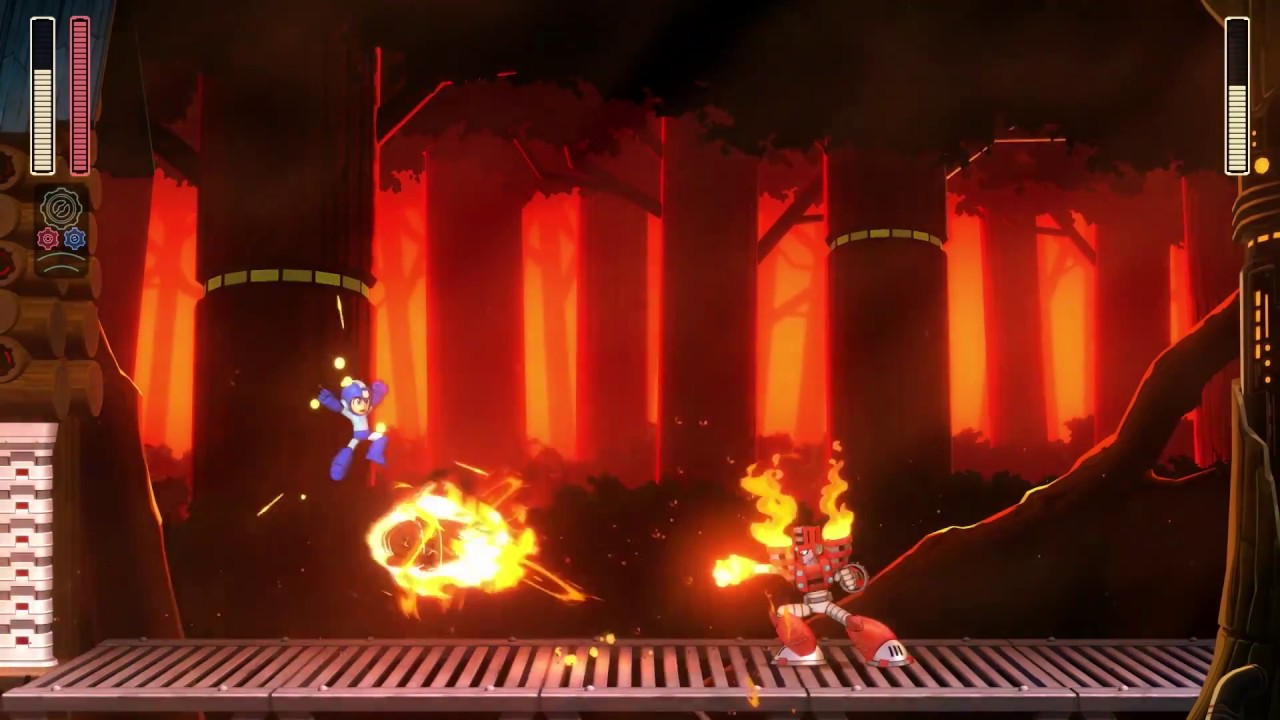 The most of the time, Torch Man is just shooting fire balls from his fists, sometimes his well try to hit Mega Man with a well- placed kick: run up to you and perform a sweeping kick, or he can jump up and then come down with a blazing kick.

We go into the second phase when Torch Man loses half of his health, he activates his Power Gear, sets his body ablaze, and jumps around the room while sending giant fireballs rolling on the ground, then jumps into the air and comes crashing down in the middle of the room, creating a massive flame pillar in his wake. He will returns to his normal pattern after a short time. 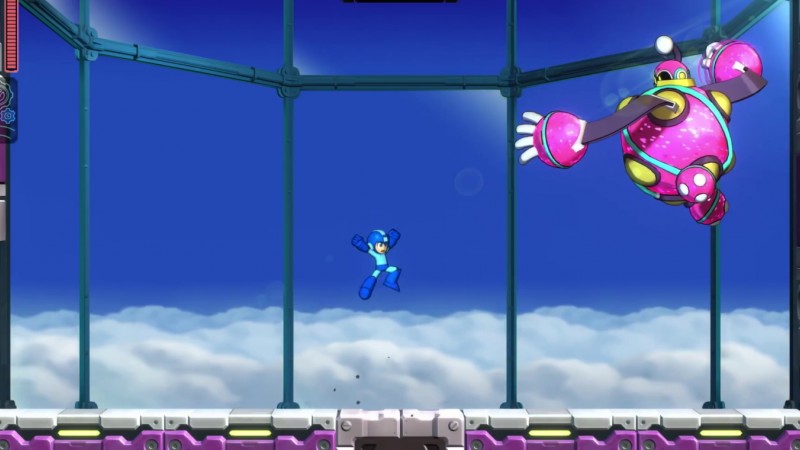 The most of the time, Bounce Man is just bouncing around in a diagonal pattern, somtimes he’ll stop and throw a punch at Mega Man with one of his strechy arms or try to squash Mega Man by slamming himself on the ground. It’s easy to avoid his attack but since he is always moving, landing some good hit on him will not be easy as well.

What should be noticed is that some of your attacks may make the battle harder. For exemple, your charge shot will simply knock Bounce Man back, but if it’s a charge shot with Power Gear induced, he will break into multiple parts and bounce on their own.

When Bounce Man is low on health, Bounce Man will activate his Speed Gear and bounce around the room at a much higher velocity.  Upon defeating him, Mega Man obtains Bounce Ball. 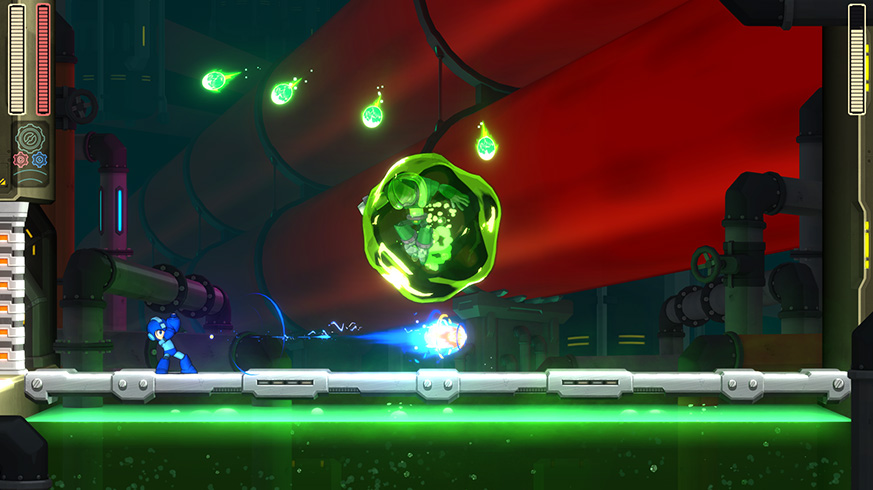 During the first phase, Acid Man will create a Acid Barrier, which will absorb your normal and charged shots until it wears out. However a Block Dropper shot will immediately break the barrier and stun him momentarily. When Acid Man is protected by his acid barrier, he’ll fire 3 acid shots which track yours position.Not too hard to avoid by jumping and sliding.

When the acid man loses over half of his health, we are in the second phase, Acid Man will use his Speed Gear andplunge into the acid pool underneath the room.He will move fast and try to get your by the acid waves he causes, those must be avoided by jumping. while passing underneath Mega Man, Acid Man will jump from the acid and fire a couple of acid shots downward. Acid Man also can create a charged Acid Barrier during the second stage that requires more Buster shots to remove.

A guide to help you find all the tiger statues. (Available in December 2020)   Intro This guide contains coordinates and a...

Survival RPG: The lost treasure is a retro rpg game with a survival twist. It combines adventure, exploration, RPG and survival in a 2D...

Just a Quick list I made to help with crafting every potion Credit to hyphz for is list on crafting aspects made this...

I got tired of not being able to keyword search the mile long keybinding list so I compiled a list. (Fleet Carriers Update - Patch...

In the fine video game of Ziggurat 2, you will be playing a variety of characters. Each of them has a certain ups and downs, or neither....