Mini Motorways Strategy Guide (Tips for You to Start)

Tips, hints, and other information to get you started without overloading your brain.

The basic building block of Mini Motorways. Allows a car to take a path that you draw. You receive a certain amount each time you choose an upgrade.

The biggest tip I can give you regarding roads is this: Diagonal roads use just as many tiles as North/East/South/West roads do, but are approximately 40% longer. Keep this in mind when building roads from remote houses to their respective destinations.

Cars are fairly self-explanatory. They are happy when they can travel to a pin and go home.

Pins are located at “destinations” (stores and other buildings). If too many build up in a particular building, a timer begins, accompanied with a “ticking” sound. If you let that timer build all the way up, it’s game over!

Alternate the flow of traffic like a real-life traffic light. These seem underwhelming at first (and often are!), but what they do is allow for one direction of traffic at a time to NOT have to slow down, providing a small efficiency boost in some situations. 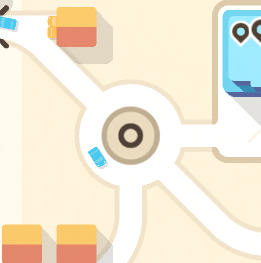 These allow cars to not slow down much at intersections.
Generally better than traffic lights, but the downside is that you get fewer of them, and they take up far more space in congested areas. Reserve Traffic lights for small, clustered intersections, and reserve roundabouts for high-traffic single intersections.

Hops over everything, from point A to point B, and allows cars to travel quickly. You want to use this on your weakest links of your entire map. If you have a bunch of green houses and a green store separated by red and yellow traffic, use a motorway to improve their commute.

Alternatively, you can observe which stores are building up pins, and use your motorway to ease the pressure off of that store by connecting it to a cluster of houses of that color.

Making a return from Mini Metro are the all-important bridges. Depending on the map, you’ll really want to plan these based on how lucky or unlucky your map layout is. Having too few bridges can really constrict the flow of traffic and lead to your untimely loss.

Laws of the Road in Mini Motorways

Much like its successor, Mini Metro, Mini Motorways is a game of optimization — making the most of what you’re given. After all, just connecting the roads is the easy part!
Optimizing Road Tiles

Pretend I have to connect this light blue store to some houses that are coming in from the south. 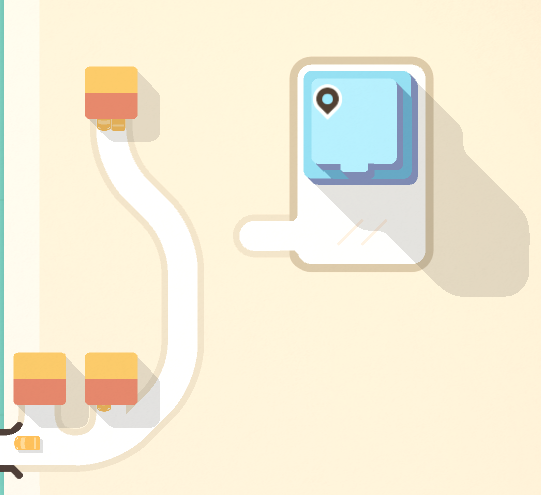 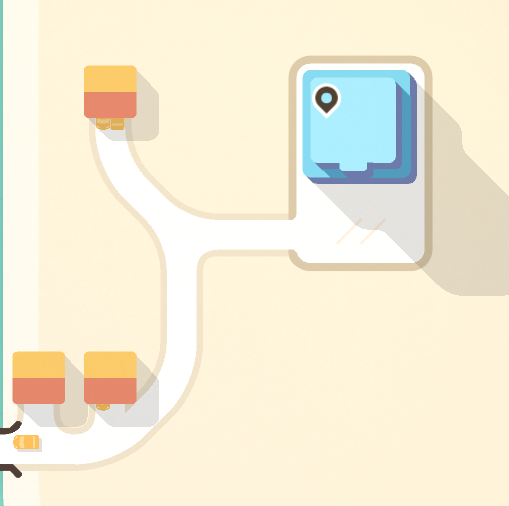 But the more optimal way would be diagonally, which shaves off a fraction of a second for any car pulling in: 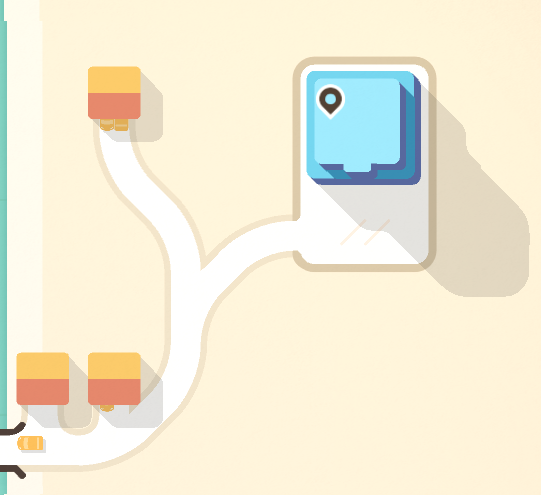 This is one of the easiest ways to step up your game, and the benefits are twofold. Firstly, your cars will drive shorter distances on average, and you will also end up using fewer tiles for longer distances, rather than stairstepping everything.

Keep in mind that this does NOT apply in every situation — The more houses you have, the more competing goals you will have in the name of optimization. And optimization with multiple factors is always a balancing act — you can only truly optimize one thing at a time, and our goal in this game is to make sure that the “longest road” (the longest distance any one car will have to make to reach a corresponding destination) is as short as possible. In other words, we want the shortest “longest road”!

If you were to draw straight point-A-to-point-B roads for every house and its destination, you’d run out of roads incredibly quickly. Visualize how branches on a tree join together from twig, to tip, to trunk. It’s not the fastest route for any one leaf to any one root tip, but Mother Nature has optimized pretty well how to get nutrients to and from leaves and the roots using minimal energy, and you would benefit to learn from her.

This is easier said than done, and can often result in long, meandering roads, but when possible, it’s good to separate traffic by color so they drive parallel to each other, rather than having to stop at intersections.

This is a bit more advanced technique for shooting for those 2000+ point achievements.

You’ll notice that houses NEVER appear on top of an existing road. You can use this to your advantage, if you know you want to place a roundabout somewhere, for example. You can block off existing free space with extra roads you may have.

Another advanced technique. Quite similar to moving trains around in Mini Metro, there is NO penalty for moving roads, roundabouts, and motorways around to deal with and react to congestion as it happens. This is what separates the newbies from the pros, and it can’t hurt to occasionally assess if your map needs a complete overhaul.

You’ll notice a road will leave a “ghost” imprint after removing it sometimes — this is because a car has reserved that road momentarily, and it will be available for use AFTER that part of the route is completed.

Thanks to WaffleMike for his great guide, all credit to his effort. you can also read the original guide from Steam Community. enjoy the game.

Cooking Simulator: How to Pause the Timers in Career Mode

I've seen many people express ire towards the timers in career mode, mainly concerning the order timer, often stating that it's too limited...

A method to get quick cash mid-game.   Step 1: Unlock the dancing Layer cosplayer in the park She appears after passing the...

An accurate, detailed and complete guide on how to unlock every achievement in Leisure Suit Larry - Wet Dreams Don't...

This guide includes all possible drink combinations using the ingredients during EPISODE 3: The Sleepover. You will also find the...