How to play, tips, general knowledge, and more in this guide!

How to play: Basics

-Left click to jump. No this isn’t sarcastic. When I first played, I didn’t know how to jump. I had to look it up. Jumping is the main mechanic of the game. Your only input is jumping, meaning that to play the game, you need to master this technique.
-What the HUD means. There are two numbers on the HUD. The right one is your score. It goes up by running or collecting the “Doge coins”. Doge coins are counted in the bottom left and each one you collect in your run grants you 100 points. 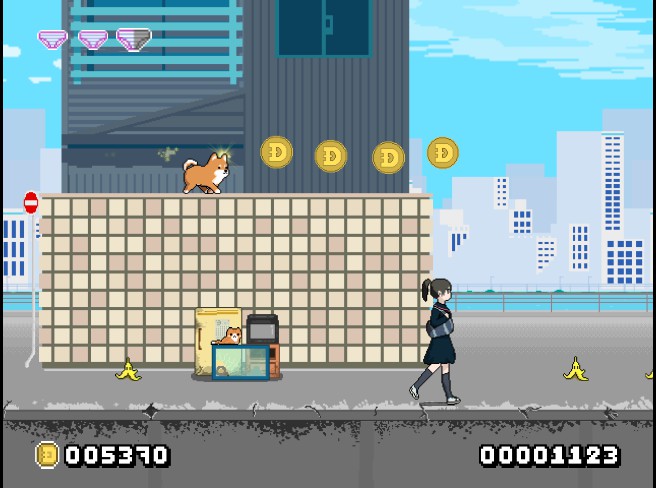 -Next up is the pantsu which is the amount of bananas you can use. This’ll get explained later but right now all you need to know is that jumping from under a girl will restore one pantsu. 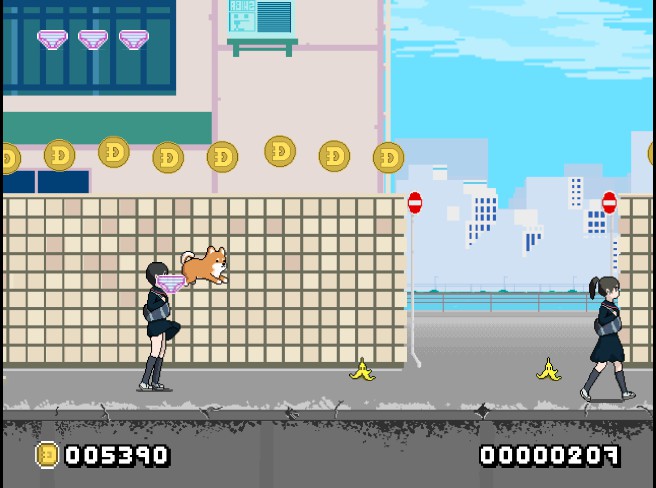 Enemies, Environment, and Those Damn Birds

There are six main ways to end a run in Montaro. Chickens, birds, bird (or crow for clarity) boxes, manholes, and bicycles. 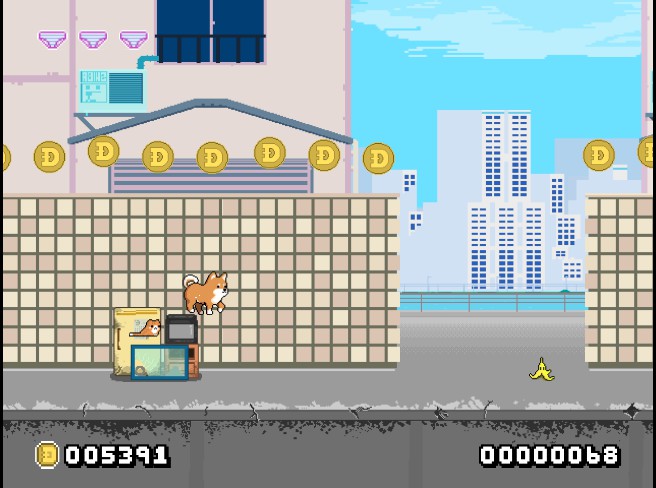 – Cats are the most common of all the bads and the one of the easiest to avoid. By jumping over or on top of them, you can get by unscathed. This is easier said than done though because sometimes an inconveniently placed banana will stop you from jumping over it and instead send you straight into the cat. This can be avoided by jumping into the banana giving you a clear path to sail over the cat.
– The second environmental enemy and easiest to overcome is the manhole. The manhole is a hole in the ground that can be jumped over. It’s that simple. Do watch out for those pesky bananas that’ll send you swan diving into the sinkhole. 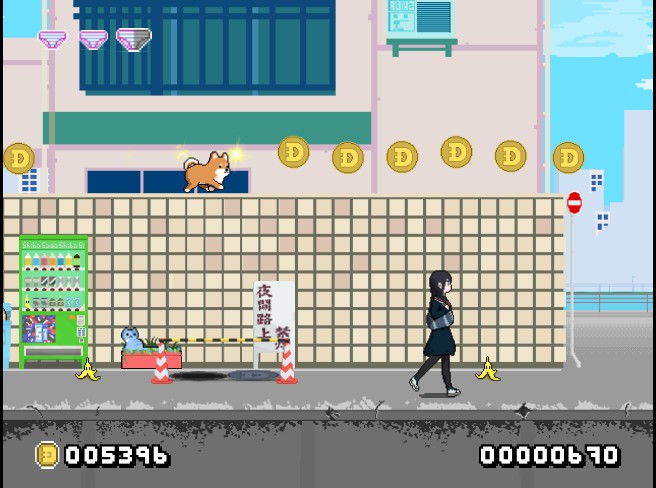 -After this is the chicken. Now you may ask yourself, “Why would I be afraid of a chicken?” If you ask yourself that, you have obviously never been near a rooster. Those things will peck your shins with morbid joyfulness in their beady little eyes. But in the game, The chickens don’t peck you but instead stamped you. They do this after you run into one of their kin, so in theory avoiding the singular chickens is the best way to not be stampeded by a mass of chicken meat. That is true, although not always possible. I have no advice other than avoid them unless the alternative to hitting the chicken is worse. If you do hit a chicken, get to elevated ground. The herd of fowl will stampede on the ground going from left to right, then right to left. 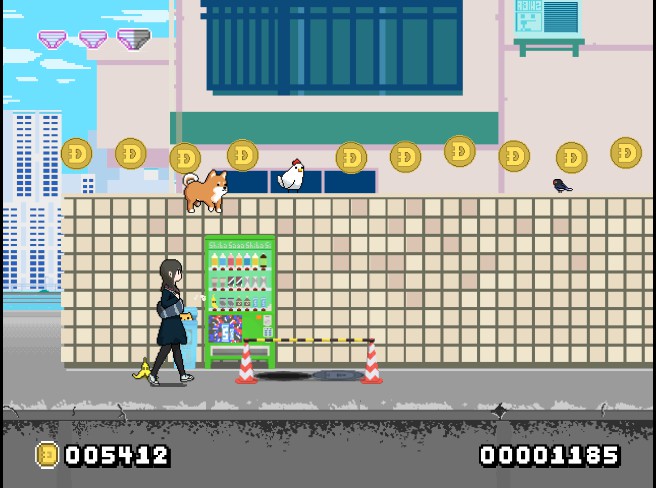 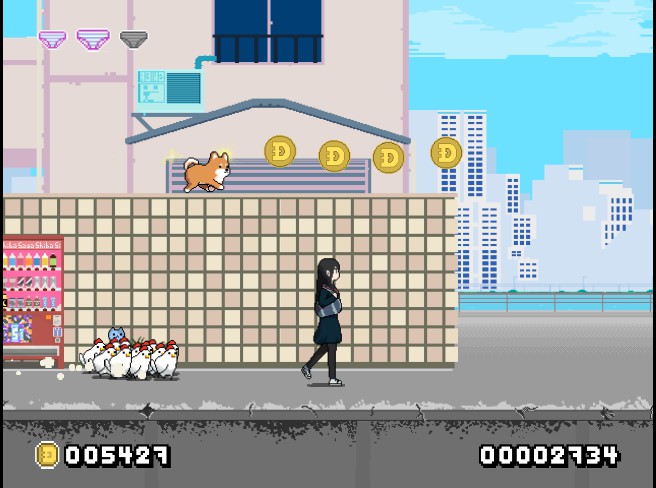 -Now are those damn birds. Not the chickens but the little ones that ruin your day. The ones that you better hope to avoid otherwise it’s a near guaranteed game-over. There are two groups of birds. Large groupings and small groupings. Both are technically jump-able, but the latter is far easier. When you inevitably hit a single bird out of the many that are there, they’ll start to fly to the top left of the screen. They will then fly to the right. An angry bird icon will appear showing where the birds will fly at you. They will not stay at one elevation unlike the chickens. It takes an immense amount of skill to jump them so good luck. 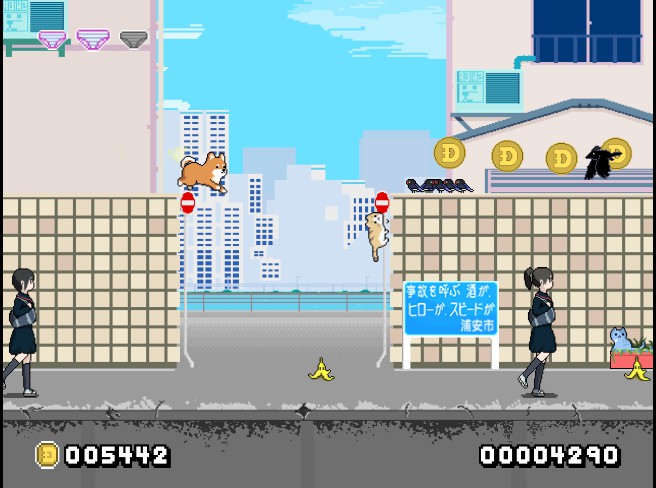 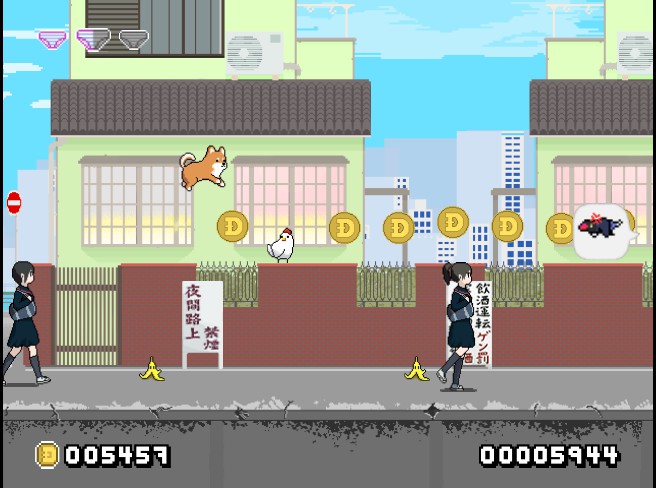 Birds that are gathered Bird flock about to decimate me 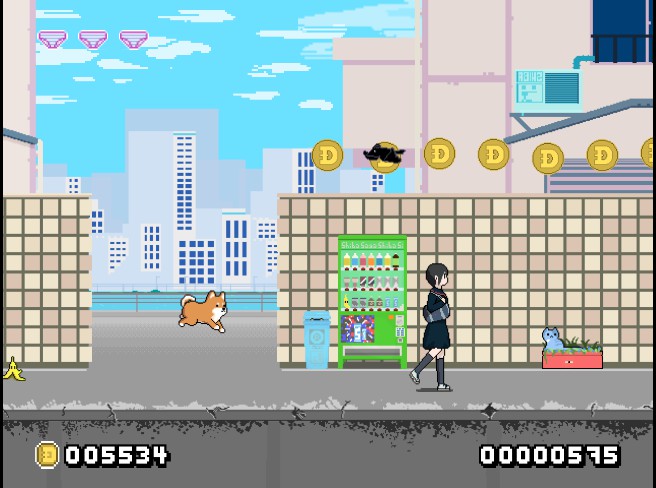 -The crows are much easier to deal with although far more annoying. The crow appears near the top of the screen and never is near the street level. It is impossible to defeat without the help of a convenient banana so don’t even try. Your best bet is to either drop or banana bounce.
-The worst, horrific, most evil obstacle are the bicycles. They are impossible to defeat, avoid, or outsmart. They sit there menacingly, waiting to be ran into. The bicycles only appear in the third section (more on that in a bit) so I don’t have all that much experience with them, but I have yet to thwart them. There is one counter to the bicycles, the stairs. The stairs appear once, for a moment. If you miss the stairs, it’s game over. 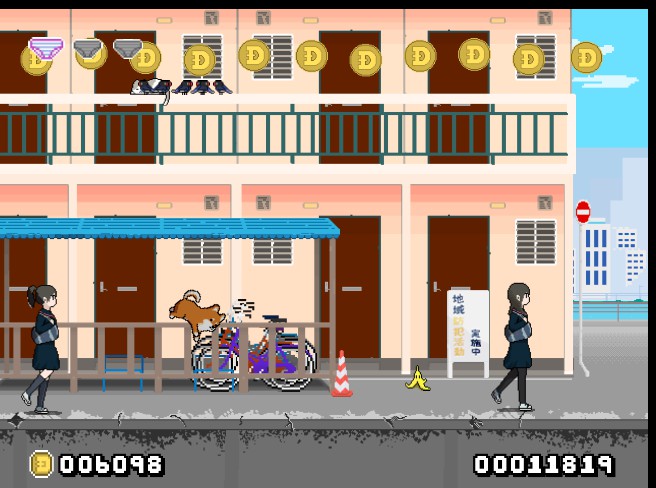 Your one savior, the stairs The bicycles attack, ending this run

Bananas, How to Use Them, Where They Are, and More

Bananas are one of the only thing on your side in this game, and even then they aren’t always reliable. The banana uses half a pantsu (found in the top left) to bounce. Without any, the banana simply stuns you, removing your ability to jump for a limited time. The bounce bounces you to the peak elevation of the fall where you hit the banana, plus some more height (it makes you go a little bit higher than you were.) They appear near exclusively on the street level, and occasionally some other places. The banana makes you roll after you land, so you’ll have to factor that in when you’re making you split second decisions. The developer was sneaky so in many cases, bouncing on a banana without jumping when there’s a street level obstacle in front of you will result in a game over. Please do note that when running on walls, you don’t need to jump to hit the banana. The crow will get you if you do. 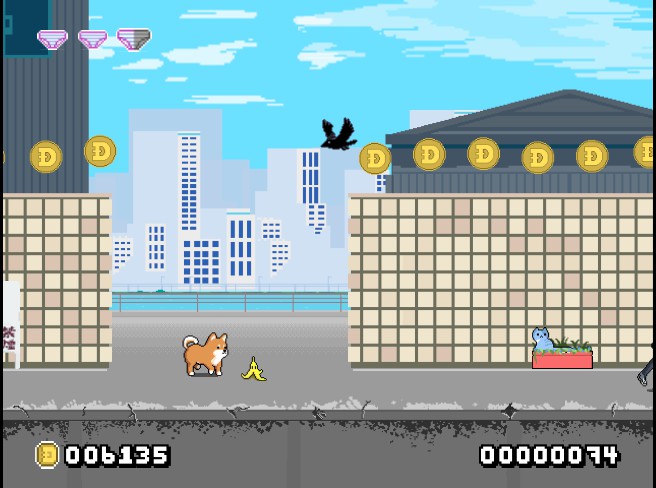 The Different Sections of the Game

In the game, there are three, technically four, sections of the game. There’s the first wall, if you want to count it, the houses, the residential area, and the apartment complexes. The houses start at 50 and has one wall height (4). The residential area starts at ~5300 and has two wall heights(2&3). The apartments start at ~15000 and have one height, the second floor(5). The doge coins appear on the second floor so it is recommended that you take the stairs, also because the bicycles appear on street level.

So that’s all you need to understand and play the game. You can now go and jump, bounce, and fail to your hearts content. But if you want some strategies to get a bit ahead, stay and read.

The best tip I have is invaluable. From what I understand, the game detects when you left-click in the hit box of a girl to play the skirt animation and add the pantsu. So it doesn’t matter when you do it, but if you left click, you get the pantsu. If you left-click while in free fall, you can get the pantsu without having to jump. This makes the game so much easier, it’s hard to express. You could do things the game never intended for you to do, like banana bounce while having full pantsu. 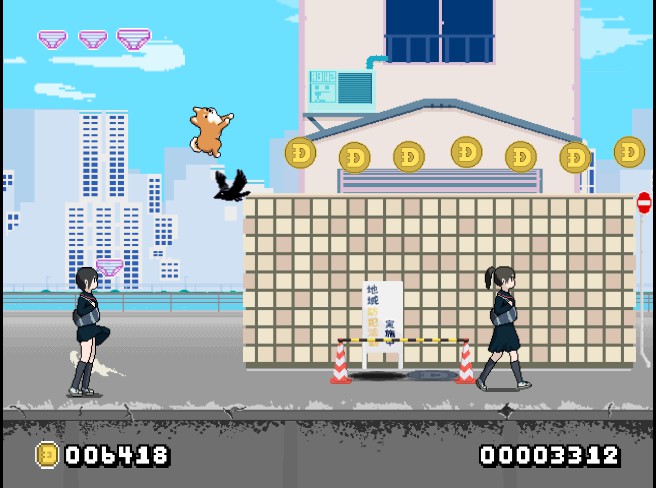 Some other tips is when in doubt and on street level, jump on the banana. You usually won’t fail if you jump on the banana with a enemy in front of you. Also collect doge coins. If not for the skins, then for the 100 points it gives you. It’ll take much longer to get far without them. In my experience, if it’s between birds or chickens, go for the chickens. They are far more annoying if paired inconveniently with a crow and banana, but have a much higher chance of survival.

Thank you for reading to the end of the guide. I would like to thank auto-correct. This guide would’ve been much worse without it. Thank you and have a good day.

Here is an FPS Guide for FPS Issues on AMD Products. enjoy the game.   AMD Software Use These Settings! Cap your framerate...

Here is a short guide to building sizes in Farm Manager 2021. if you like to plan out your farm in advance and leave space for that fruit...

Subnautica Below Zero: All Challenge Runs

This is a list of challenge runs for those looking for more things to do in Below Zero. Personally, I found Below Zero to be a lot easier...

SteamVR: VRSS Guide (How it Work)

How do you know VRSS is working? What should you set your resolution to?   What settings to use Short answer: Set resolution...

Spinnortality: All Marketing Options and Their Cultural Values