The basics of how to do mounted combat effectively, since there is no other guide yet.

This is a very basic guide on how mounted combat works in Wrath of the Righteous currently (build 1.04.d). It’s cool and fun and powerful if used correctly. This guide will hopefully explain how, and how to mitigate the disadvantages and manage the bugs so they don’t impact your enjoyment of play.

This is based on my own experience playing a Cavalier (Gendarme) on a horse on normal difficulty. He is not so much a protagonist of an epic fantasy story as he is a Tomahawk cruise missile.

This is not an optimisation guide. This is not ‘the one correct way’. It’s just some information that may help you get more fun out of your gameplay.

Your mount is a party member, selectable and directable just like any other companion you meet. Their portrait is in the bottom part of the UI, but always on the right-most position. So if you have a party of yourself and five companions, you will need to scroll right to see your
mount.

To mount them, you need to use the “Saddle Up” ability. If you start at level 1 with a rideable-size mount, this ability will already be in your hotbar. If your companion only becomes rideable later, it will appear and be available under your abilities later. 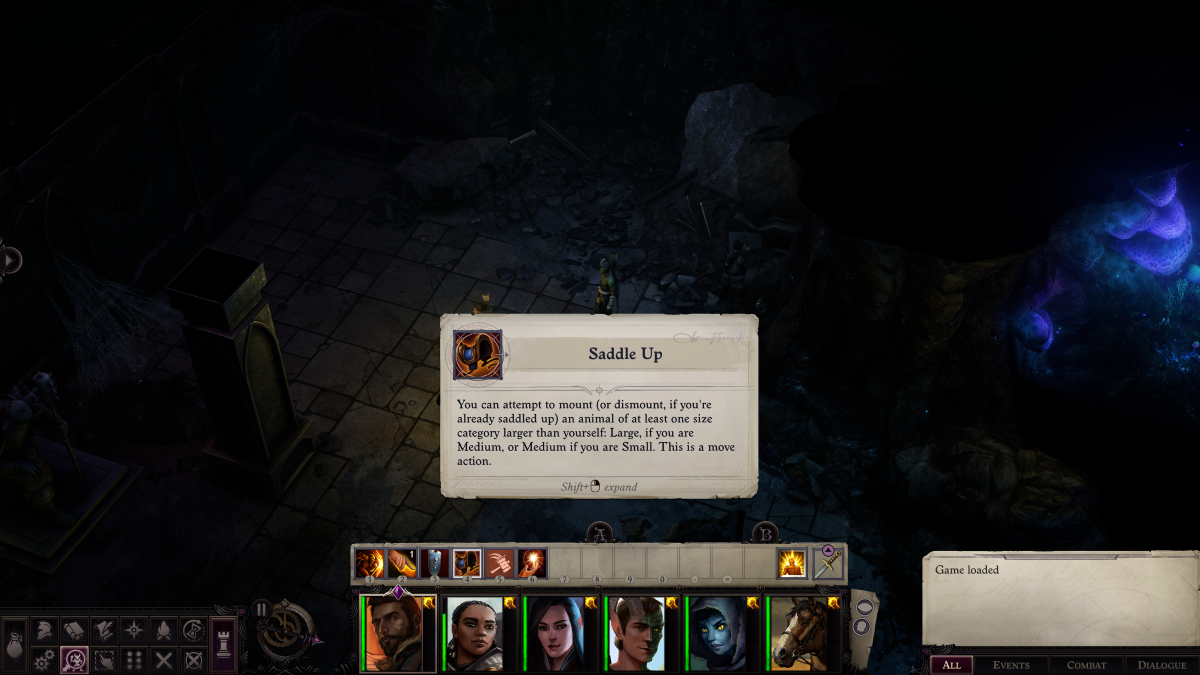 Click on the ability, and then click on your companion, and your character will mount them. Clicking that ability again will deactivate it, causing your character to dismount. 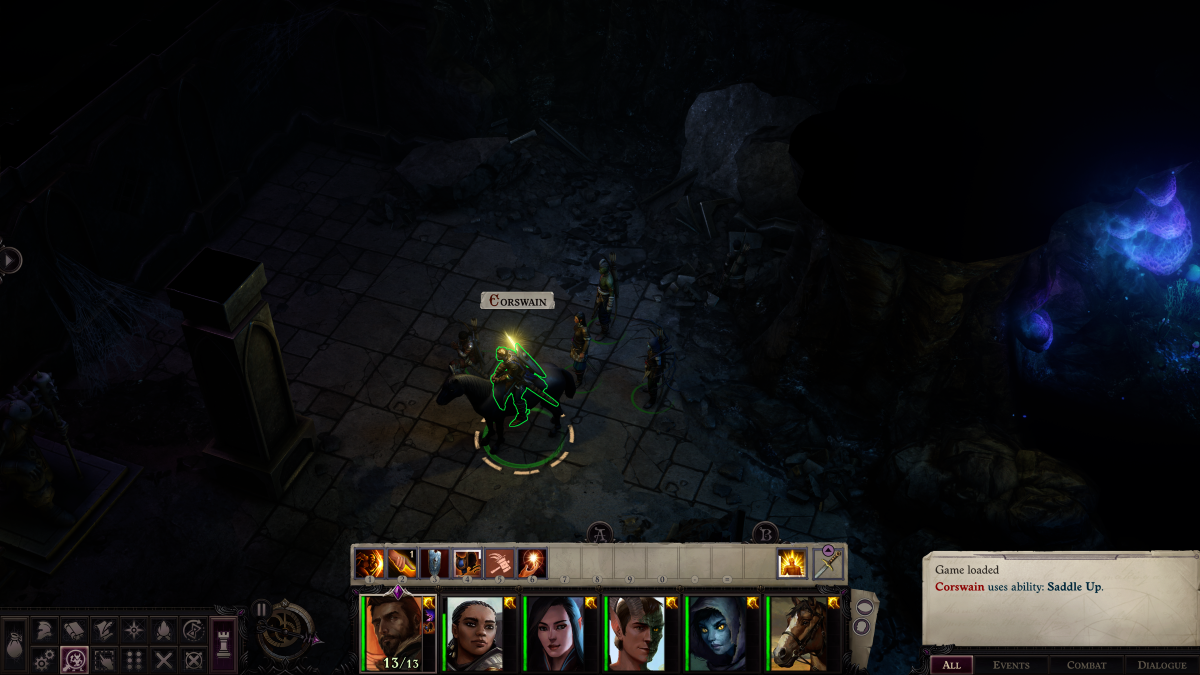 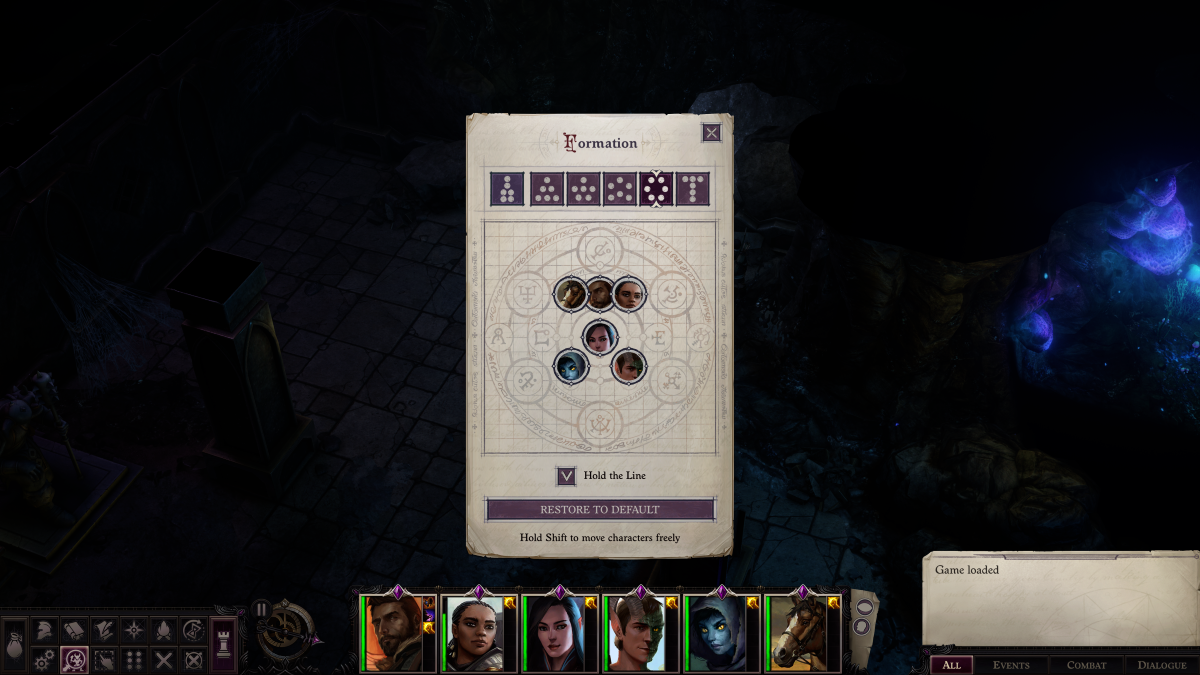 Saddle up is a move action. If you are not mounted at the beginning of combat, it will cost you your move action to mount.

A bug related to saddle up that I have commonly experienced is that if you click on a door, object or loot with your mounted character, or with the whole party selected but your character is the default closest to the object, the action will not complete. This mostly happens with inspection objects and containers, and rarely with doors and loot. It is obvious when this happens, you character freezes and is unable to accept new commands because it is stuck trying to complete the existing command.

Once mounted you and your mount are one entity for the purposes of movement and combat commands. Select your character, click on a destination, and you will ride there.

Pathing outside of combat is fine. Pathing in combat, particularly turn-based mode, can be bugged.

When selecting movement (the green and yellow dotted line), your character may get ‘caught’ on the edge of impassable terrain and end up losing their movement/turn, which is a bummer.
This happens when you instruct them to move in a bent line, because they do so by the shortest possible route and hug the edges.

Fighting atop your Mount

There are several advantages to fighting mounted in Wrath of the Righteous.

You and your mount occupy the same space, and are more or less the same entity for the purposes of combat. Even if your mount is large, you’re occupying a space no larger than two medium-size creatures standing side-by-side. This means a few things:

There are also a number of defensive effects, and some implications.

When you and your mount are attacked conventionally i.e. melee/ranged, it is your mount that is the target. It’s AC is used, and its hit points take the damage.

(NOTE: Area effect spells and damage – fireballs, alchemist’s bombs – will affect both you and your mount. Your mount will not take it all.)

However, if your mount dies, it will drop and you will fall prone in the same space. This is very bad if you have enemies in melee range, because:

So your mount going down underneath you in melee combat is very bad.

If you are using a reach weapon, an instruction to move and attack an enemy will only move you in reach range of your weapon, leaving your mount’s natural weapons out of range.

This does not seem to be the case with charging – on a charge you will always close nose-to-nose even if you have a reach weapon, so both you and your mount will get attacks.

Much of being effective on a mount above and beyond what you can do on foot relies on planned positioning. Turn-based mode helps a lot with this. In Turn-based you are also much more likely to be able to set up multiple charges, whereas in RTWP you will usually only get 1 at the start of combat. Yes it is slower mechanically, but if you can get off multiple charges you will also end the combat quicker. A cavalier-gendarme on a horse with the spirited charge feat can charge one-shot enemies pretty reliably at level 3.

I do not know if this is a bug or not, but currently much, if not all, of the time if you use your attack action for the ‘second move’ to get you into melee range, your mount can still make an attack even though you can’t. Which is nice.

First thing here is that if you are not a halfling or gnome and unless you selected a horse as your companion, you will have to wait until mid-level for your companion to get a size increase before you are able to ride them. Pick whatever you find interesting and fun, but from a utility and mechanical point of view, horses are hard to beat.

Your animal companion will also have a ‘class’ choice. The most useful choice here is one that reinforces the play style and mount use you have decided for your character. If you intend melee mounted combat, bear in mind how important it is for your mount to not go down underneath you.

For some feats, particularly teamwork feats, your mount needs an intelligence of 3 to qualify.

If you want to engage in mounted combat, the Mounted Combat feat is mandatory and should be taken as early as possible. The feat itself is decent and makes your mount a bit more survivable by potentially negating one hit around, but more importantly it unlocks other mounted combat feats. To make the most of the feat, you need to invest in Mobility skill. If you are going to be wearing heavy armor you will need to either somehow mitigate armor check penalties, or get Skill Focus: Mobility, for the best chances of this happening.

Why? Because it unlocks the ability to purchase the Spirited Charge feat. And this, THIS, is the true power of mounted combat. This feat doubles your damage on the charge. Not only your weapon damage dice, or bonuses, or energy effects, or sneak attack dice, or other bonuses. Everything doubles. Let the bodies hit the floor.

The Indomitable Mount feat allows you to use a Mobility check to cancel your mount failing a saving throw, in the same way that Mounted Combat can mitigate a hit. If you have already invested in ranks in Mobility, this feat is worthwhile to further prevent your mount from going down under you.

The Trample feat is an interesting option, but less useful than it first seems. It is an action instead of attacking, not in addition to attacks. A charge is always better, and a full attack is usually better. It does potentially knock the enemy prone, which could be useful in some circumstances to create space, or give another party member a chance to retreat without incurring an attack of opportunity.

Teamwork feats, particularly Precise Strike and Outflank, are powerful options for you and your mount to take, because since you are occupying the same space, you will always meet the condition of being next to an ally with the same feat.

This is by no means an exhaustive be-all and end-all guide on mounted combat. And again, this is not an optimisation guide. There are also many more nuances once you start looking at individual classes and what you can do with them with mounted combat.

I hope these basic principles and observations are useful to you and give you a little bit better understanding of mounted combat in Wrath of the Righteous, and make your game even more enjoyable.

Thanks to PradaMeinhof for his great guide, all credit to his effort. you can also read the original guide from Steam Community. enjoy the game.