A summary of some characters roles, and suggested skill/artifact focuses for handling Infernal difficulty. Will fill in more characters later.

Dracula is one of the starting characters, and is an early game powerhouse due to his starting skillset and teamwide recharge. His kit is based around his Survival Instincts mechanic, which double casts certain skills when his HP value is at 0. While his starting kit is focused on HP damage, he does have access to many SP nukes/buffs/debuffs, so you can slot him into many different compositions.

Starting with a 1 cost HP nuke with decent stats. a decent buff for 2 AP that applies 2 stacks of a heal and +4 HP damage, and a 2 cost 2 hit lifesteal, I often use him to smooth out the early game when running Bloody Mary or Frankenstein/Creature compositions, as those characters recharge skills usually cost too much AP in the early game.

Due to his early game kit being so useful, I usually avoid focusing on boosting his skills through sacrifice/reaper upgade/skill combines, besides picking up extra copies of 1 cost nukes. 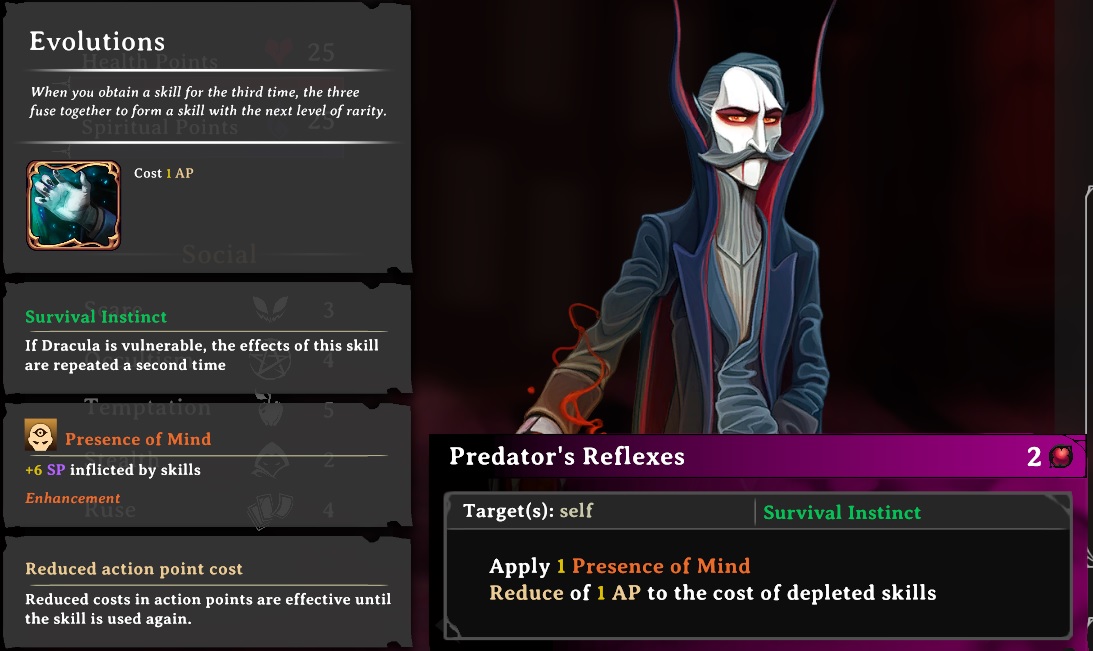 Predator Reflexes and Unleash the Beast are his primary bread and butter, and once those two are set the rest of his skills don’t particularly matter. His first turn is the most AP intensive, so the artifact that gives +2 AP on the first turn works well for him to get set up. Unleash is an initiator skill, so you MUST use it as a first turn action, making it difficult to build Dracula to work with Lilith. Once you have both of these skills, you Unleash, use all your attacks, and use Predator + Refresh skills to have a full line of 0 cost nukes and a stacking physical damage buff every turn.

His artifact is useful in that it lets you skip hunting for your first copy of unleash, and lets you use him as a pseudo physical tank. 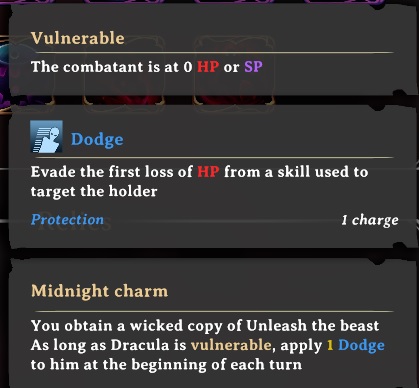 Special note: The White Lady’s Power mask may be bugged, and doesn’t work the same way as normal AP cost reduction, and appears to permanently reduce a skills AP cost for the combat. Getting 2 copies of Bite gives you an infinite damage combo where you continually reset 0 cost Bites.

Bloody Mary is a starting character, and one of the most powerful damage dealers in the game. While her starting skills are lackluster, his recharge skill applying a Mirror to double cast all her abilities allows her to rapidly outscale most other characters in damage or debuff output. Her special skill tag is a drawback however, as Bloodthirsty limits her into targeting the lowest HP enemies with her HP skills. She also provides a lots of debuff application onto enemies.

In the early game her expensive recharge skill, expensive 2 cost nukes, and low damage debuff values keep her from solo carrying the first few fights, but the moment she gets some 1 cost attacks and damage buffs she’ll quickly spiral out of control. I place high priority on skills, reaper upgrades, and skill sacrifices for her early.

Wicked Cast reigns supreme in Bloody Mary’s skillset, particularly at golden rarity. A 0 cost nuke with no real conditions on a character that scales damage extremely well. I sacrifice all of Mary’s early nukes just to grab more copies of Wicked cast, and prioritize reaper encounters to upgrade as many copies as I can to Golden rarity. Pair it with skill resets from Dracula/Frankenstein/Hecate for even more free damage every turn. While her other skills aren’t bad, this skill alone gives Mary incredible damage output that synergizes with many other character comps.

I’ve used Mary for debuffs/AOE SP damage, but unless another character is taking a higher skill priority, I always chase Wicked Cast with her.

The White Lady is a character you unlock very early on, and is usually the centerpiece in SP damage compositions, while also having some potential in AP hogging compositions with Mask of Power. Her primary mechanic is based around focusing power in one of her Masks, through both artifacts and skills. She also provides some useful SP nukes and damage debuffs. 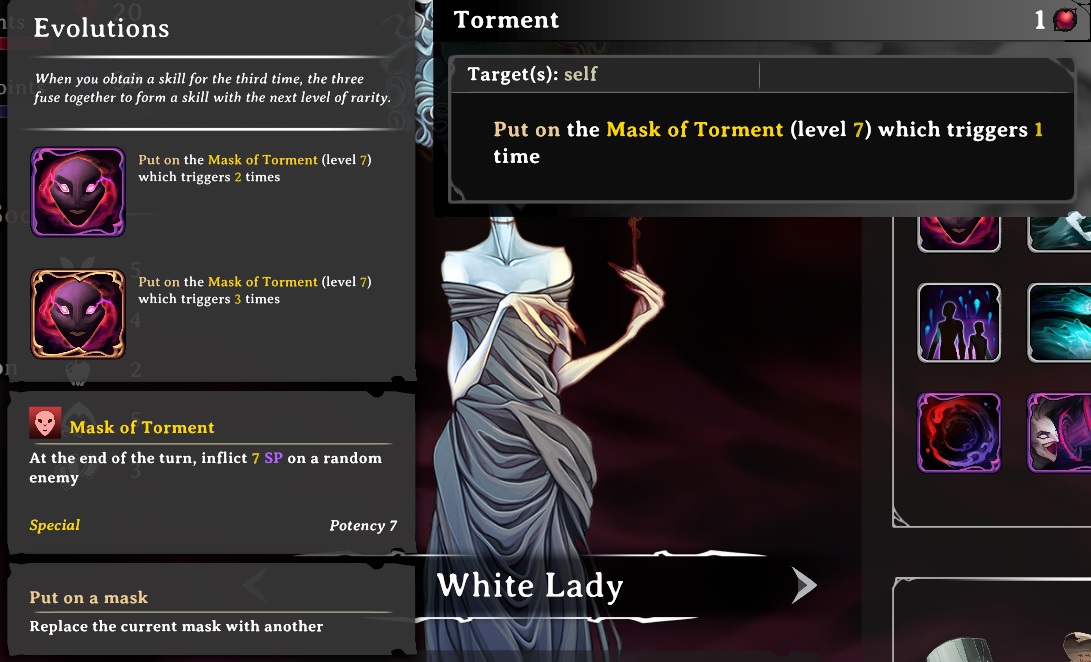 In the early game, she’s quite good if paired with any other SP nuker, including Samedi, Frankenstein, or Lilith. Mask of Torment gives her a free SP nuke at the end of every turn, meaning slower and tankier early game compositions can survive the early game. She is a massive skill hog though, and if I do run her I prioritize getting her skills combined/sacrificed/reaper upgraded to begin the mask synergy combos and her artifacts take priority over all others.

As many copies as you can find, and takes priority in Reaper upgrades. The more copies the better, as it just increases the effectiveness of every other mask synergy here.

At least 1 copy, the damage bonus persists through the entire duration of the combat. You can get Mask of Torment to 50+ damage a tick, with over 15 ticks per turn. Also provides you with both buff dispelling off enemies, and debuff removal from your own team. Lilith has amazing synergy here, as she has a 0 cost 1 turn provoke on her refresh, guaranteeing you one damage boost, and most enemy buffs have a duration of 2.

While lackluster if you don’t have artifacts/above skills, each cast of this takes all of your Mask buffs/synergies and applies them to a single target, allowing you to focus nuke single targets for hundreds of SP per cast. Extra copies are nice, but being gold rarity only it’s difficult to find.

White Lady’s artifacts are amazing, the first is a multiplier, so a white Torment mask with nothing else will proc 3x at the end of turn, but a gold Torment mask with nothing else will proc 9 times. Add in all the other synergies and you’ll lose count of how many damage procs show up. The second is an important source of base damage, as you can quickly stack extra procs, but damage is slightly more difficult to build up quickly through Spectral Blast.

Growth is an incredibly powerful buff, opening a fight casting this usually is equivalent to a big AP boost.

Hecate is a powerhouse character that can fit into nearly every composition, with a decent early game and extremely powerful scaling. She has access to a 1 cost AOE hybrid nuke and scales with damage extremely well. Her drawback/trait on her abilities is cycling between new and full moon phases, with certain abilities being moon phase bound. Her recharge will also cycle her current phase. 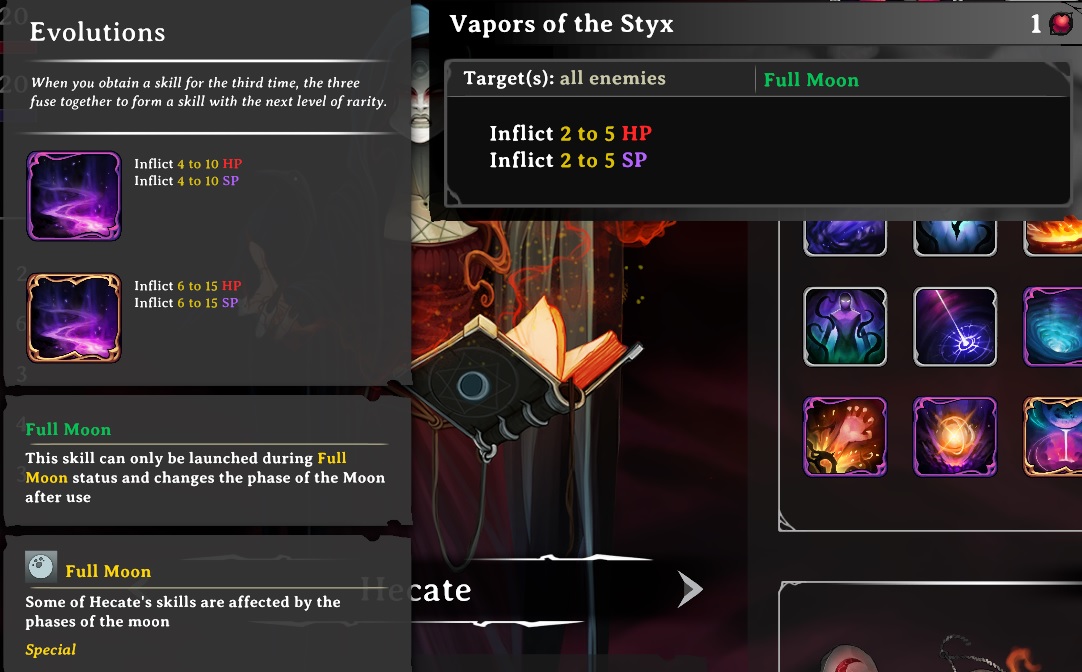 The primary strategy around Hecate involves casting one of her cheap nukes, refreshing, and recasting the cheap nuke multiple times a turn, while stacking damage bonuses on her. Her power scales up immensely when you get her utility abilities down to 0 cost, so they are effectively “free” bonuses. 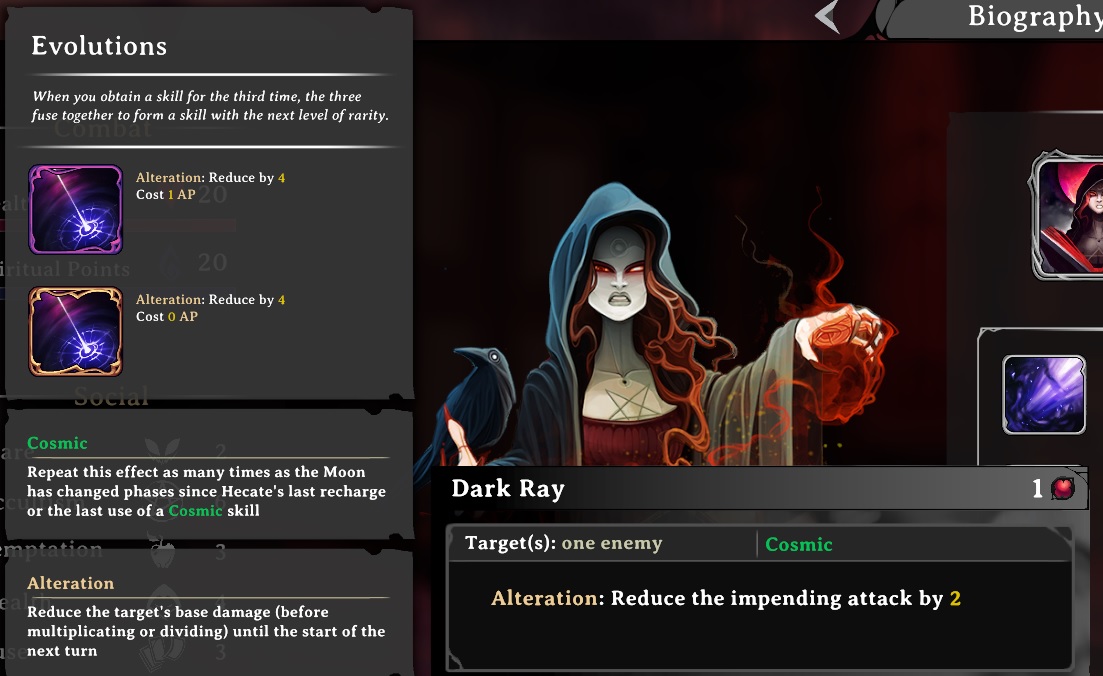 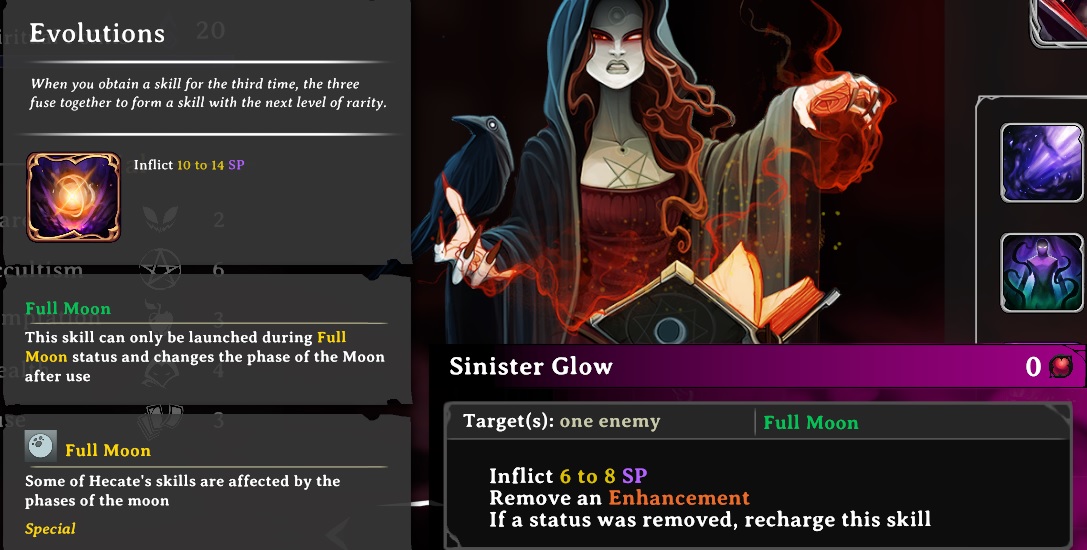 Recall that our primary initial strategy is a single cast of the Full Moon nuke Vapors of the Styx, replacing it with a 0 cost nuke doubles the amount of phase changes and 0 cost buff/debuff casts we can pull off a turn. While this isn’t a priority till you get Dark Ray to 0 AP, it’s definitely an important skill to pick up for her kit once more synergies are in place.

This relic is what turns Hecate into a damage powerhouse alongside her incredible debuffing powers. Most fights with Hecate involve spending all your AP cycling moon phase casts, so she’ll end many fights with 30+ hp and sp damage bonus.

I believe this is the only source of targeted invulnerability buff in the game. The “advantage” property alongside Hecate’s huge array of 0 cost special property skills means you will usually get at least one, if not two free casts of this per turn.

Hecate also has a 0 AP SP heal with mental barrier, and a 0 AP mirror and Presence of Mind SP damage buff, which can be useful pickups lategame to fill out her slots. Be very careful of multiple mirror applications, as you get strange infinite stack behavior, but I haven’t found much of a benefit from going to 99 buff or debuff stacks besides Frankenstein+Creature decomposition damage boosts.

Hecate’s primary weakness is the Hunt property, where skills are locked for 2 turns after casts, so my recommendation is to fill in the rest of her team with at least one character that isn’t hurt as much by skill locks (White Lady, Tanks like Lilith or Headless).

Frankenstein and the Creature

The two characters are combined into one section, as you are not allowed to run one without the other, and they are designed to require each other for synergy. While they may seem complex at first, most of their abilities are mediocre besides one specific combo, so whenever I run them I focus on hitting it ASAP.

Their early game is atrocious, with low damage split between HP and SP, and poor AP management. Many runs with them for me can end or nearly end from a single bad fight if I don’t have an early game powerhouse to carry them through, and I spend my devil gauge on combat frequently. However, the sheer power they unlock in the midgame is enough to completely break the game with infinite AP.

Everything you do in game should be to get you to this skill faster. The property Touch of the Creator decreases in AP cost for every AP the Creature expends, while the skill itself refunds AP for the entire team, including the Creature. The effective cost of the skill is always going to be at most 3 as long as the Creature is equipped with a 3 AP ability or has their recharge at 3. A unique property of Growth buff is that it refunds AP from the BASE cost of the ability, not the actual.

One of Frankenstein’s starting abilities, which will cost 0 by the time Touch of Chronos is at 0, and it will refund 3 AP to your turn. This already is nearly an infinite loop, since we haven’t brought in our 3rd party member who can also have modified cost abilities or just pure AP generation. However, for true infinite looping, we want: 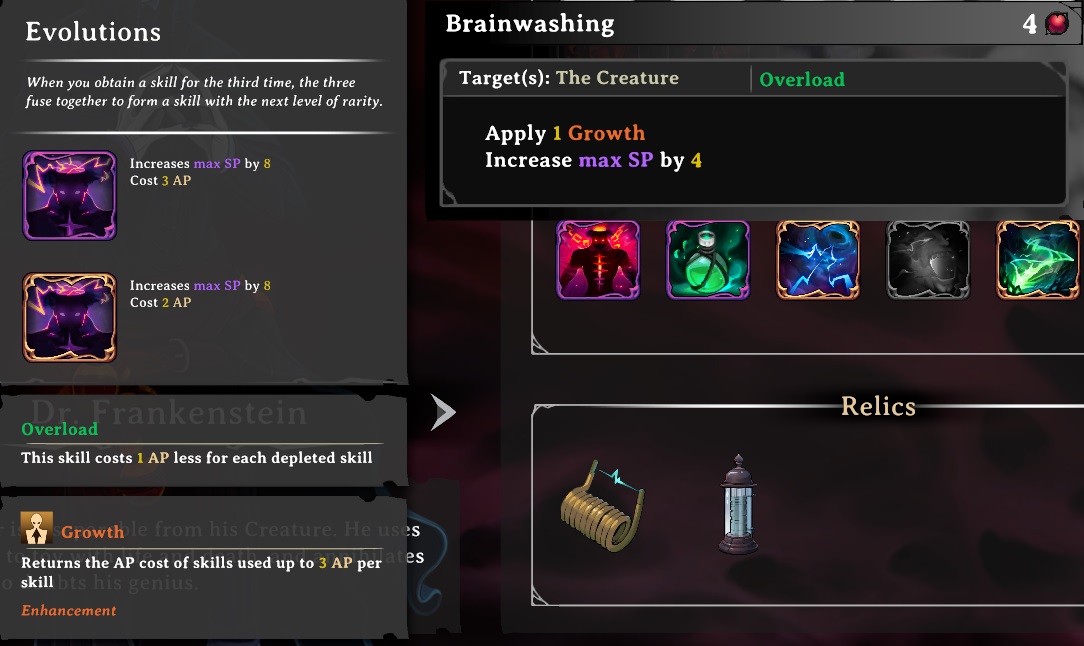 With the right skill setup or just upgrading it’s tier, you can now apply TWO instances of growth per chronos loop, meaning our net AP cost on the Creature is ZERO, and our net AP cost on Frankenstein is POSITIVE TWO (refunding 3 AP per loop, and spending 1 on his recharge skill).

This is just infinite AP per turn, alongside constant growth stacks for your 3rd party member. The moment you get these 3 skills up on Frankenstein, you have infinite AP to play with, so go wild with all the crazy combos you’ve always dreamed of.

Thanks to Teleo for his great guide, all credit to his effort. you can also read the original guide from Steam Community. enjoy the game.