The Zenith is a Hardmode, post-Moon Lord melee weapon crafted using a variety of swords obtained throughout the game’s progression and the zenith is the most powerful weapon for terraria at least for now.

How the zenith work ?

When used, the sword sprites of its component swords fly towards enemies within a 20-tile radius of the cursor, and circle back in quick, frenzied arcs. These pass through solid blocks, and three swords will appear per use (at base melee speed). Each sword sprite deals the weapon’s full damage

So what the crafting material is ?

it’s not harder than you thinking,don’t worry 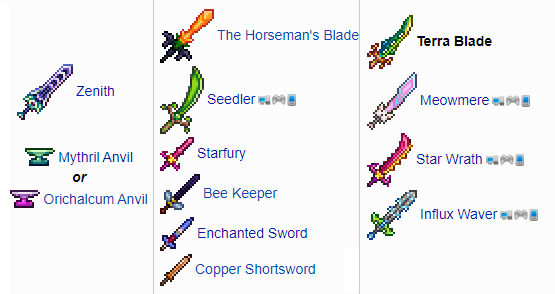 and yeah without without further ado lets make the zenith shall we ?

– don’t throw away your coppershortsword (oh you already do that don’t worry just make another character)
– exploring the underground to find some enchanted sword shrine (also you can try some fishing in any biome to get the gold crate,gold crate has 2% change to drop the enchanted sword)
– also try using gravitation potion to find some floating island to get the Starfury (you can try fishing in sky lakes to get the sky crate,sky crates has 16.67% change to drop the Starfury)
[at this time we should have coppershortsword,enchanted sword and Starfury]

– fight eoc to make light bane/blood buctherer
– go to jungle and find 12 Jungle Spores and 12 Stinger to make blade of grass
– fight skeletron and find gold chest in the dungeon its have 1 in 7 change to get the muramasa
– get some hellstone in the underworld to make fiery Greatsword
combine light bane/blood buctherer,muramasa,blade of grass and fiery Greatsword to make the night edge (at the altar)

– also don’t forget to kill the queen bee in the bee hive at underground jungle,to get the bee kepper
[at this time we should have coppershortsword,enchanted sword,Starfury,bee kepper and night edge]

– find orichalcum/mythril ore to make the anvil,also find titanium/adamantite to make the forge
– fight three mechanical bosses to get 3 soul each
[at this time we still have coppershortsword,enchanted sword,Starfury,bee kepper and night edge]

– if you’re lucky you will get the seedler (if not,try fight another plantera)
– fight some mothron,mothron have 25% change to drop the broken hero sword to make the terra blade (spawns during the Solar Eclipse event and It can only spawn after Plantera has been defeated)
– fight some pumpking,pumpking have a 14.29% change to drop the Horseman’s Blade (spawns during the Pumpkin Moon medallion at wave 7)
[at this time we should have coppershortsword,enchanted sword,Starfury,bee kepper,terra blade,seedler and the Horseman’s Blade]

– find the martian probe in the outer two thirds of the map, but not near the world center (try go to space layer with battle potion and lifeform analyzer)
– fight the martian saucer,martian saucer have 16.66% to drop the influx waver
[at this time we should have coppershortsword,enchanted sword,Starfury,bee kepper,terra blade,seedler,the Horseman’s Blade and influx waver]

– fight the moon lord,moon lord have 11.1% change to drop the star wrath or the meowmere (also good luck try to farm some moon lord) 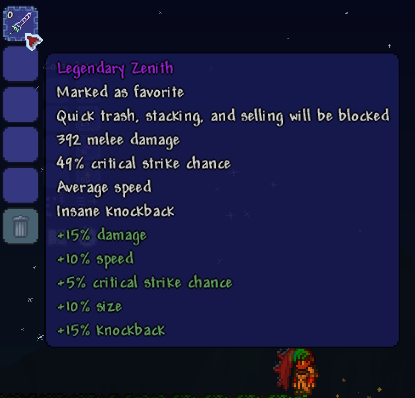 do you confuse to make the terra blade?

Achievements
the zenith also have a amazing Achievements which added in 1.4.1

Tips for ya
~ The Zenith has the potential to reach more than 70,000 DPS on a single target with the right armor, accessories, modifiers, buffs and correct positioning.
~ Against segmented worm enemies like The Destroyer, it can even surpass 120,000 DPS.
~ In a regular combat situation, most players will see the Zenith dealing around 20,000 to 30,000 DPS.
~ The Zenith can defeat the Moon Lord on Master Mode (277,311 combined HP) in about 11 seconds.
~ The Zenith is arguably the game’s strongest weapon, making it ideal for any type of fight.
(yeah i know this tips is from wiki so stop saying omg this is stealing)

Also check the recipe on the wiki https://terraria.gamepedia.com/Zenith