Here is a guide about Evasion and Mana stacking Poison Huntress in The Slormancer.

In this build we want to abuse the 45th attribute on savagery, which gives us max flat raw damage based upon our missing mana. You guessed it right, we are gonna stack mana like never before.
I wanted to use poison on this build, since you can apply it easily with a passiv from the Architect of Death. With the right setup in arrow shot and some additional projectile (hello legendary shoulders), we can basically hit every mob on the screen with one shot, and after that we just have to run and dodge monsters. 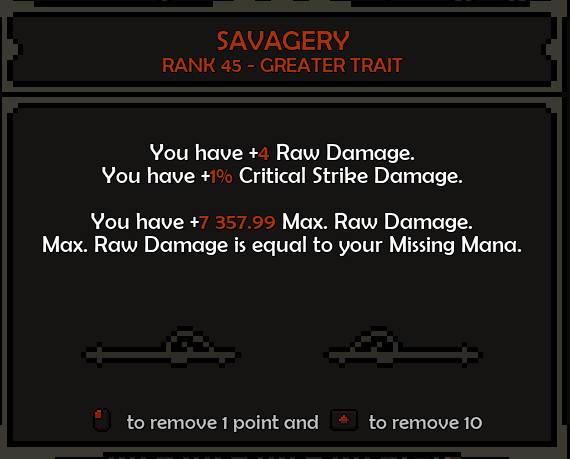 Ok cool, but why evasion stacking too you may ask ?
Because of the passive “Evasive Magic”. We can convert 100% of your evasion into mana, which will be dmg. And evasion is cool too for defense. 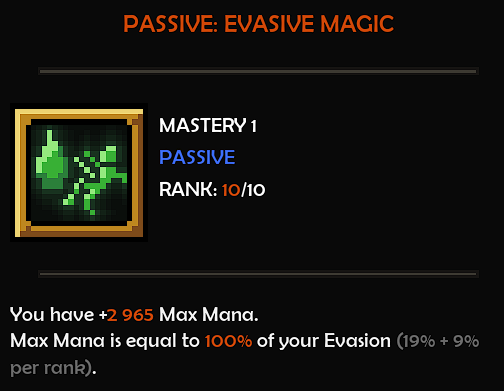 More Mana, Elemental Damage, and is even the “Malediction” a malediction and not a benediction ?

As we said mana, we want the bow “Ferocious Affinity”, which give flat mana and %mana, as well as raw dmg equal to 8% of mana (double bonus)
As we progress to the build, we’re gonna have the primordial bow: 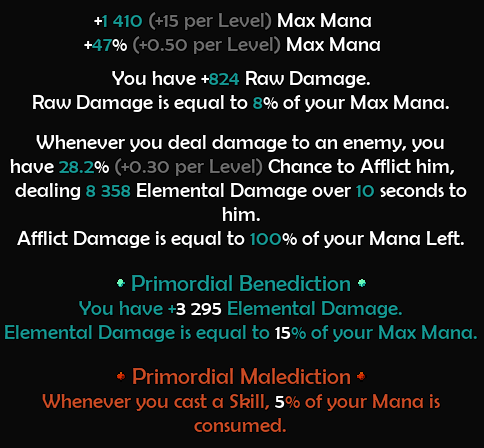 This is a BIG win-win. Since we’re gonna have a lot of mana, having to be low mana would take long (if we have no regen or no leech), so this helps us dump 5% with each cast, pretty neat.

Another cool thing with the primordial version, it gives us ele dmg. But we’re using poison, so skill damage you will say. Yes, but look at this: 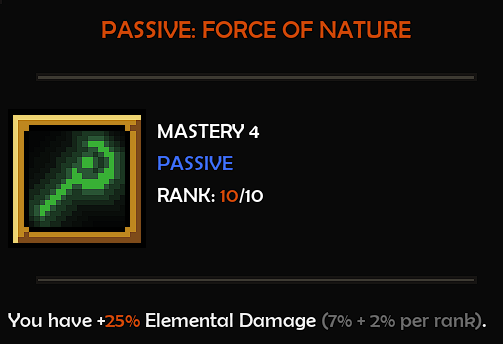 Getting some Elemental resistances 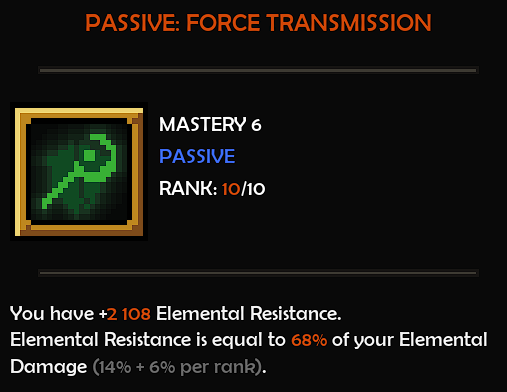 It’s “free” ele res, since no other passiv on those lines are great for us. (You can drop the 25% ele dmg buff for “From bones to Ballista” if you want too, more on Perks and Passives)

The 45th trait is mandatory for this build. All of this build damage comes from this trait, you need it at all cost. You can take up to the 60th to have a bit more Reaper damage (which is added to Skill damage), but you can trade off for some Fury attribute too.

Taking up to the 10th is very nice, it will give you 32% Max Mana, which will transfer to more damage.

It will give you some Critical Strike Chance, and some Evasion, which means Max Mana, which means more damage. You will also have a bit more dodge, always good.

I also take the 60th on savagery, which gives me another reaper dmg (so more skill dmg), but i don’t think it matters much. 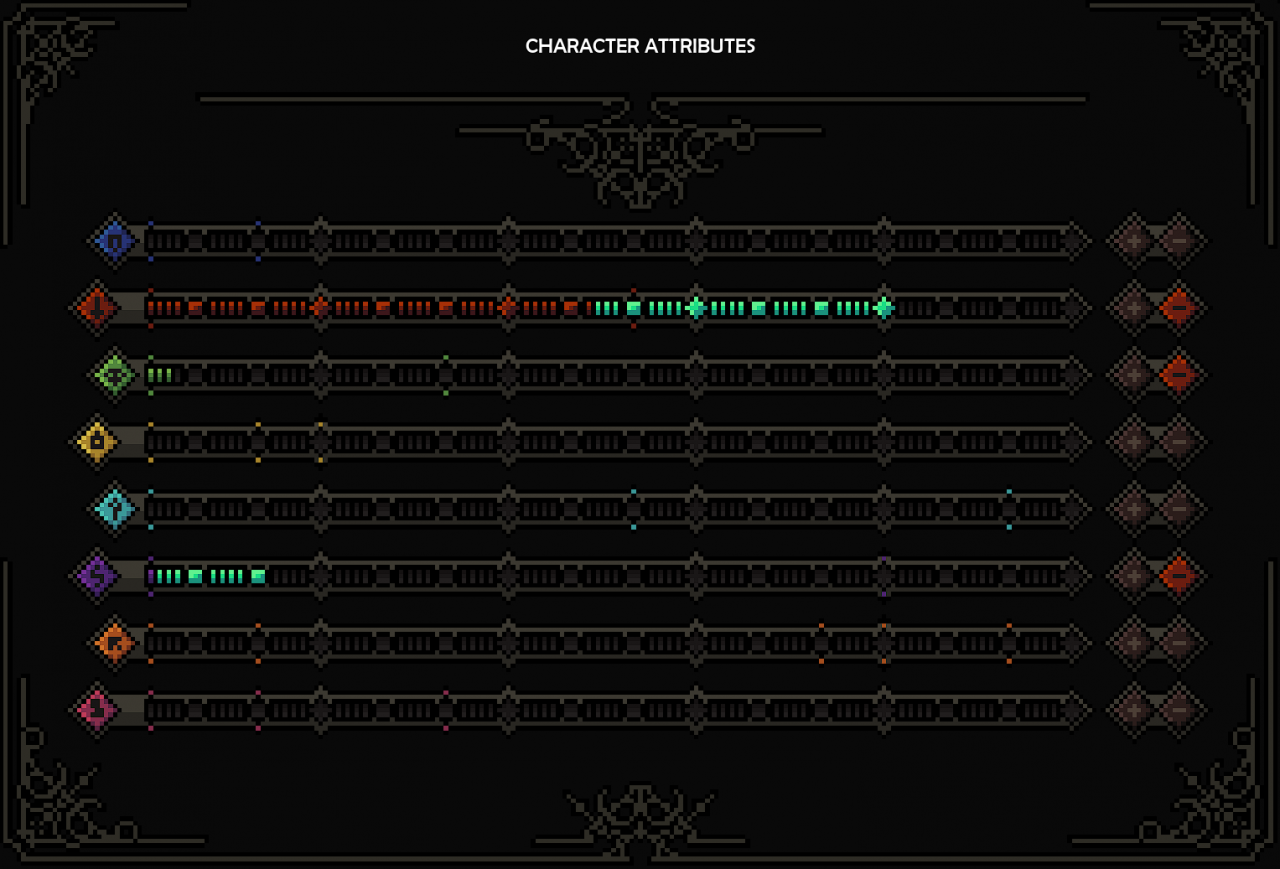 If you’re lacking some evasion, you can also invest in Fury. It will also grant some Critical Strike Chance, which might help you a little bit with dmg. 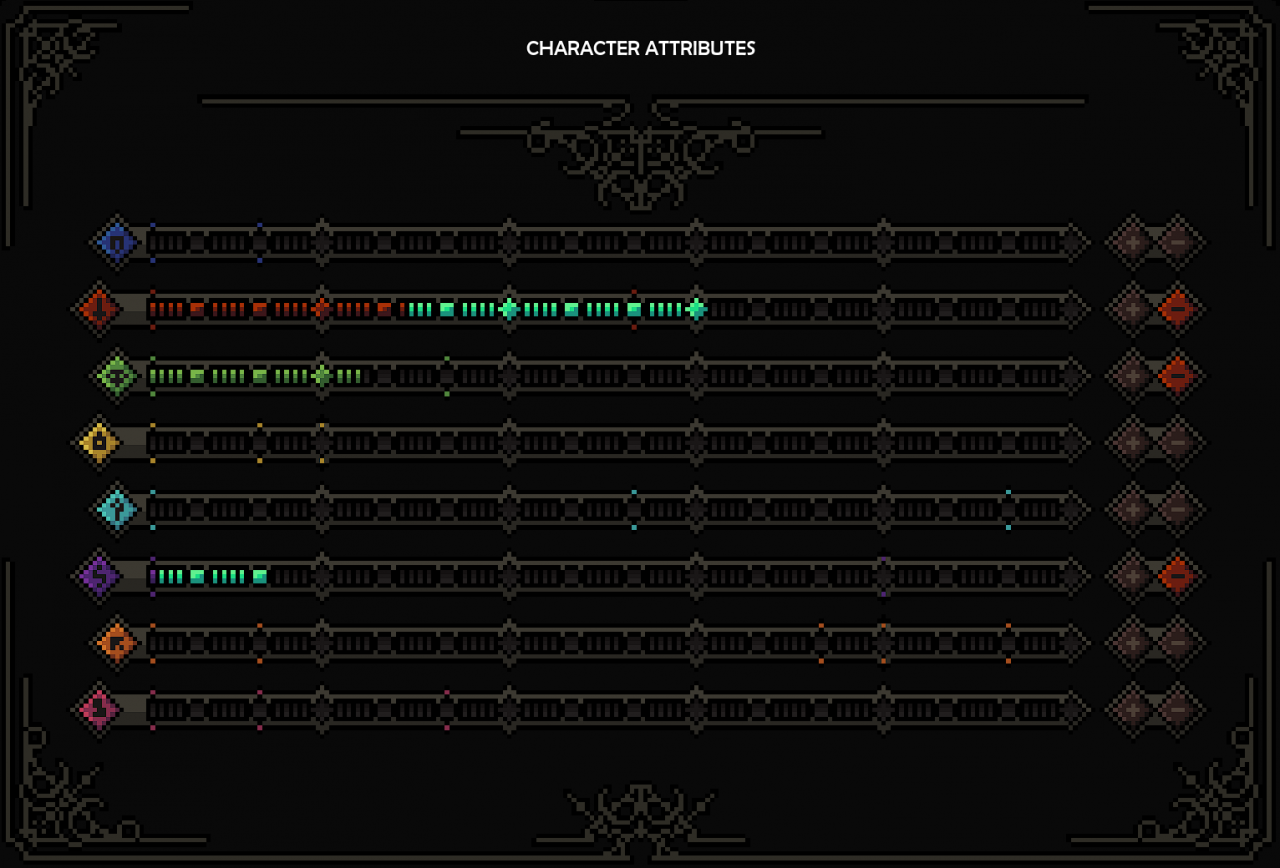 In this priority order, skip to next if not available on the item, or already present.

You will be mostly looking for base items named as “Light …” and “Mystic …”.

Mod from Base Stat pool mod

Since all epic stats have the same mod pool for each item, this is a list of all good thing you may keep if you’re getting one of those.

If you’re playing with Rain of Arrows, this will also be good IN ADDITION to all previous one:

Just put the one you are using. Probably Cory Ironbender for the Reaper, Rain of Arrows or Arrow Shot for masteries, and Savagery / Willpower / Fury for attributes.

Helmet
For the helmet, you basically need (but it’s not really mandatory), the % Max Mana Multiplier. From “Slormandrite-Infused Diadem”.
Armor
“Heart of Darkness”. Just more evasion with Evasion Multiplier.
Cape
When you really play the poison in this build, you want of course the “Soul Eating Mantle”, dealing 1% (or 7% with a +30 item) of the enemy’s Max life per tick as additional damage for Damage over Time or Channeled Skills (poison too).
Shoulders
If you want to play Arrow Shot, you want the flat addition projectile, from “Ethereal Cloning Pads”. Needed to feel good if playing with Arrow Shot
Gloves
If somehow you’re dealt damage and you didn’t die and you don’t leech (I don’t know how all of this can happen at the same time), you can always put the “Immortal Grasp”, restoring you Life over the next seconds based up to 7% of your Ele dmg. Not needed
Ring
Chance of poison to spread can be useful sometimes, if you didn’t poison all the screen at once. It comes from “Ezdock’s Pandemy”. Not needed
Other Ring
Ring of Mana is good. Sometimes you may not have enough mana to cast a spell, so having a way to restore instant mana is nice.
Boots
The gold find boots are good (“Sparkling Boots of Midos”), since it increases your Goldus collection radius.
Amulet
A legendary that you don’t want is “Tear of Arah”. Because you will recover too much mana in order to have the bonus from the savagery. (At least with a high reinforce level item, it may be good with low-gear) 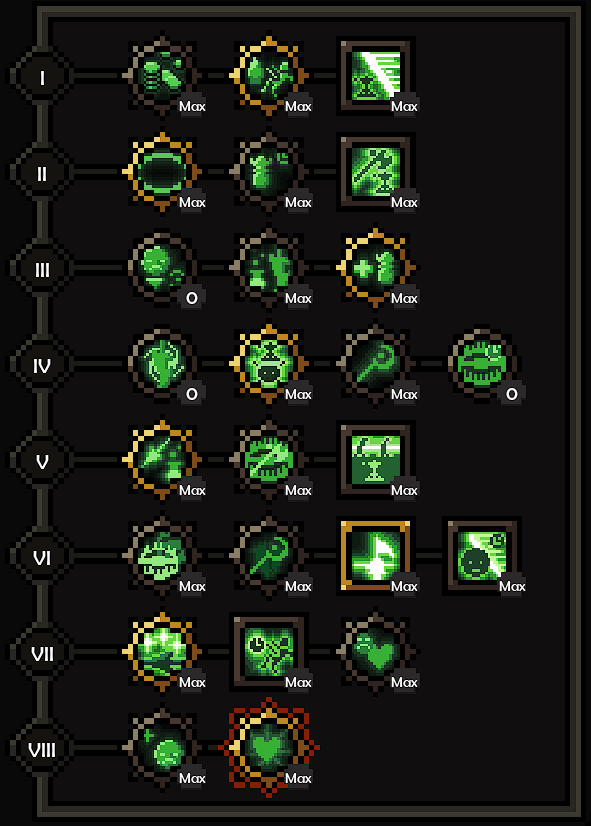 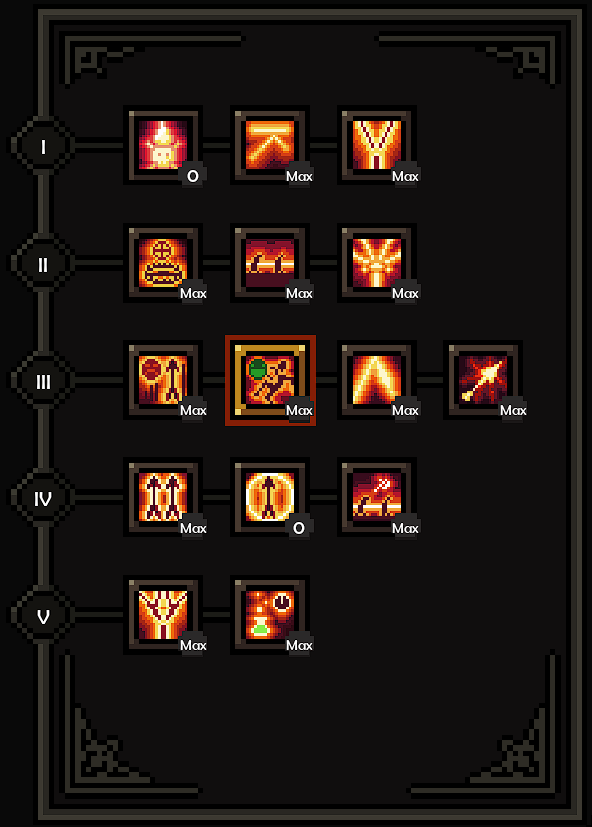 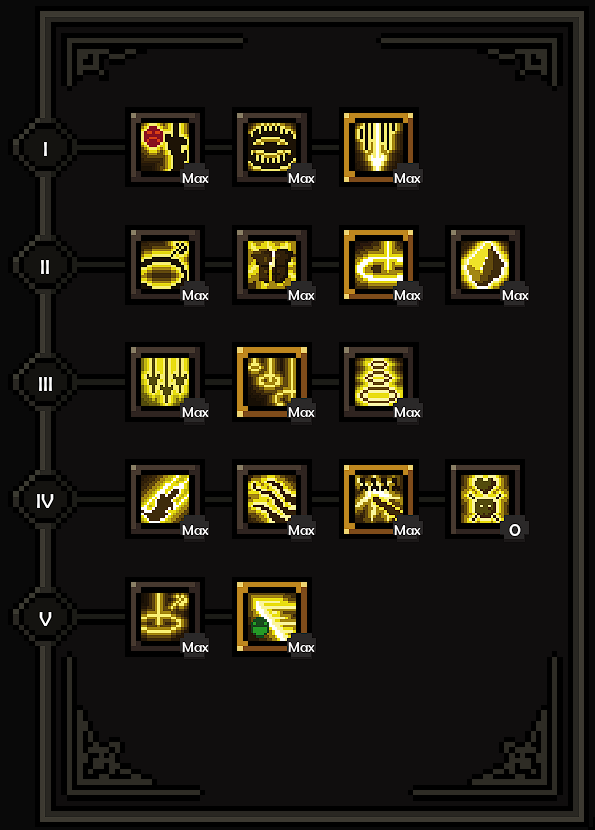 So here we’re playing with the passiv “From bones to ballista” (passiv 4-2 = 2th in rank 4), since we don’t have ele dmg yet (no primordial reaper). So we also take the 3-3, it’s free life. Not much, but always good since we don’t get one-shot for now. We also take 6-3 since no ele dmg means no ele res.
For Arrow Shot, we do not use this, only using the passive 3-2 for evasion multiplier while delighted. So basically, we only use Rain of Arrows and therefore keep delighted status all the time. By doing so, with the help of passiv 5-2 of Rain of Arrows, we can have up to +50% attack speed, which feels great in the early stage of the build. We lose all the stacks if we use another skill. I personally prefer taking 2-3 over 2-1, just because pulling monsters (and pulling monsters away with 3-2) feels really great. Melee monster can’t hit you!
You will see for now the poison damage is not so great, we deal most of the dmg with Rain of Arrows, but poison will finish monsters (since we get Rain of Arrows poisoning with 5-1 of the specialization).
Personally I used this setup as the start of the build, since poison damage didn’t feel good, dealing dmg with Rain of Arrows, getting some attack speed and the bonus evasion was great. 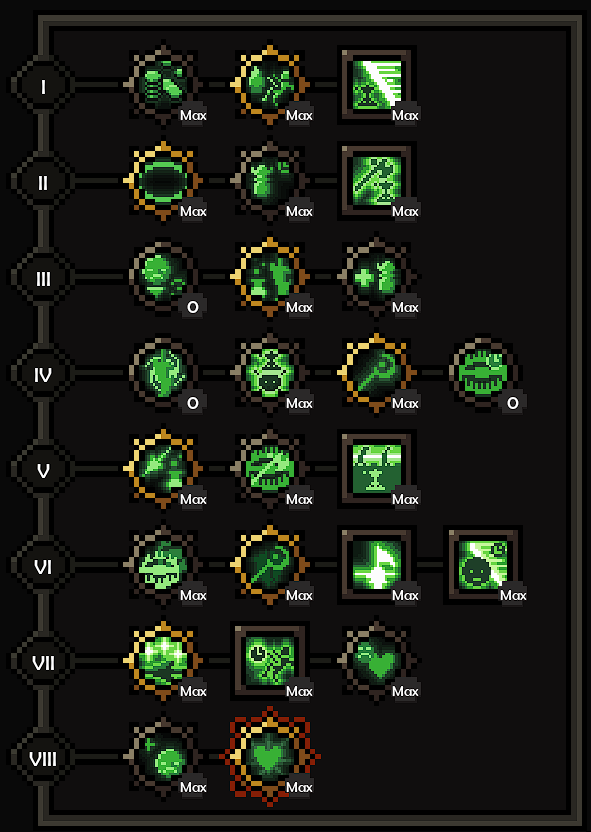 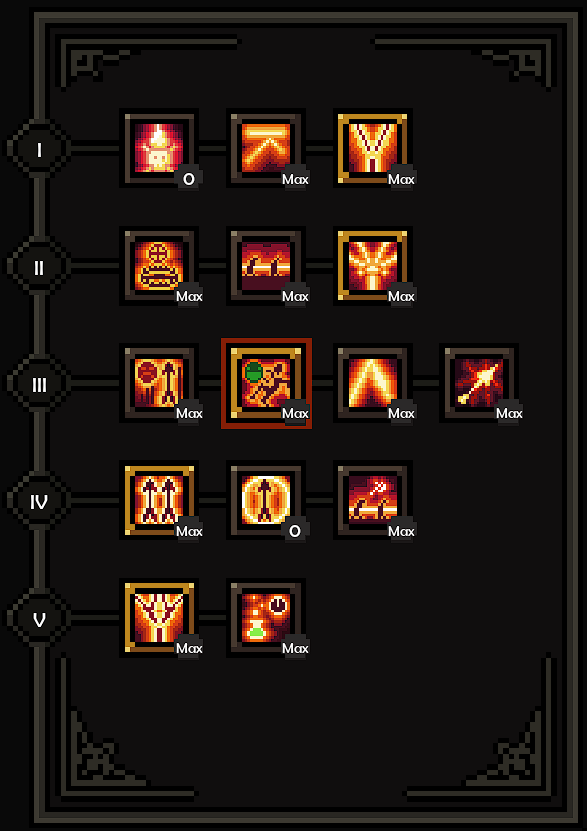 Switching to this when you’ve got yourself the primordial Ferocious Affinity. We get the ele dmg and ele res conversion from ele dmg from passiv in the specialization (4-3 for ele dmg and 6-2 for ele res). When you have the primordial bow, normally you should already have some nice piece of gear, and probably more than 20k mana. You will see that spending this much mana in order to get de Max Raw Damage can be quite difficult.
This problem is solved with the bow, basically removing 5% of your mana each cast. In order to get this faster, I start the expedition by spamming Arrow Shot (since the cooldown is lower), and when I reach low-mana, switching to Rain of Arrows fully, like previously, stacking attack speed stack by keeping delighted.
Later on you can fully switch to just Rain of Arrows when you get some decent attack speed, but casting Arrow Shot will always be faster.
At some point when you really have very good gear, you can only use Arrow Shot (what I’m doing), and you should be able to cast one Arrow Shot per room, and eventually all the enemies will die, due to the poison. 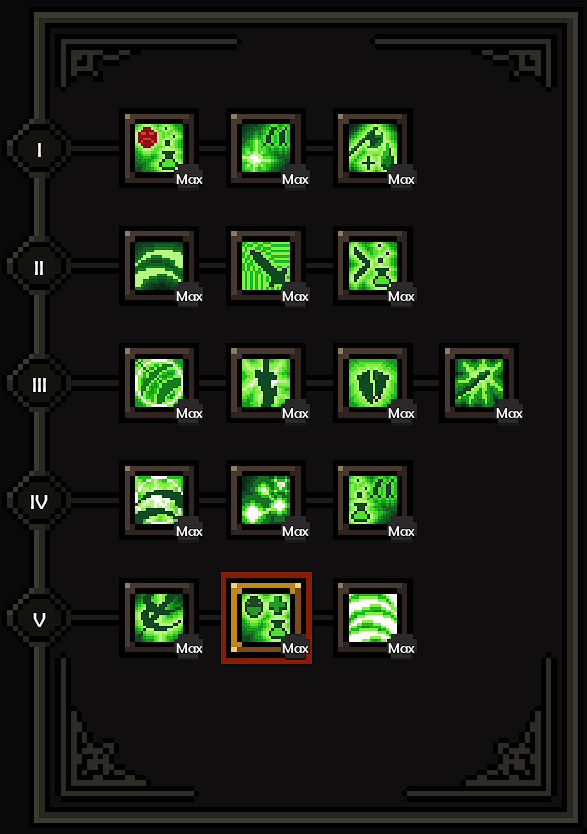 If you’re somehow really struggling to stay alive, you can go for Stab 5-2, which grant 3.5% leech on poison (in addition of the 1% from 8-2 of the specialization) 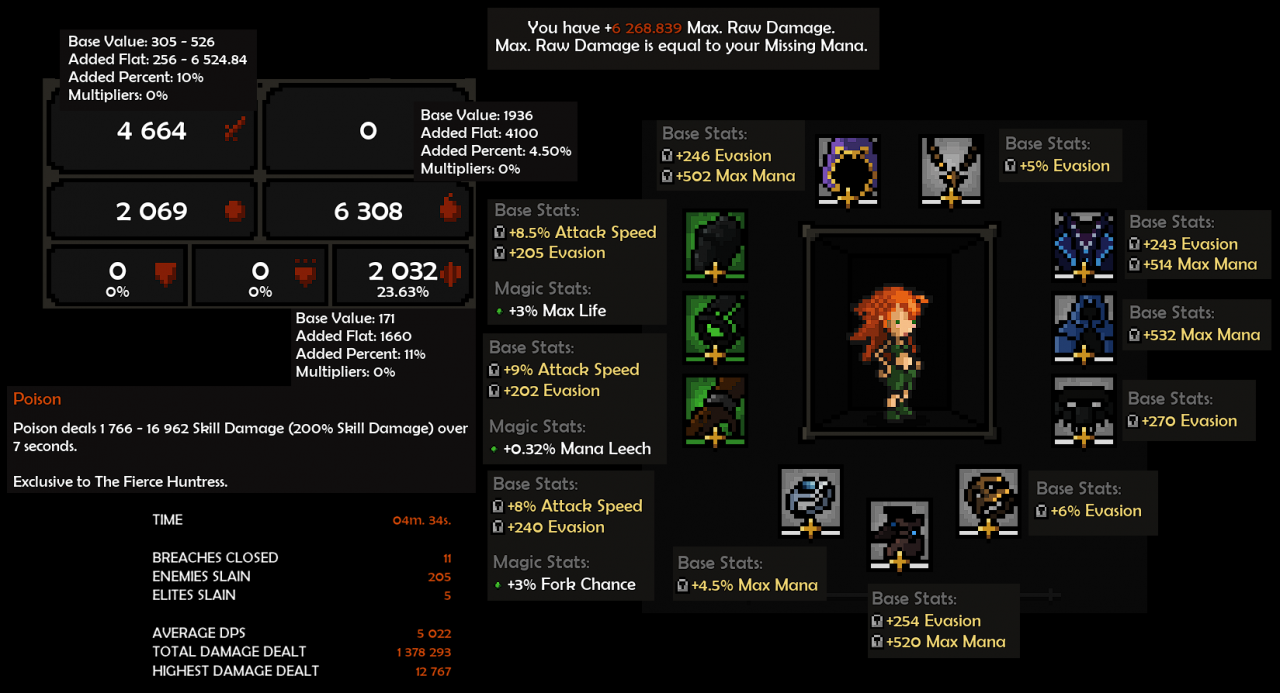 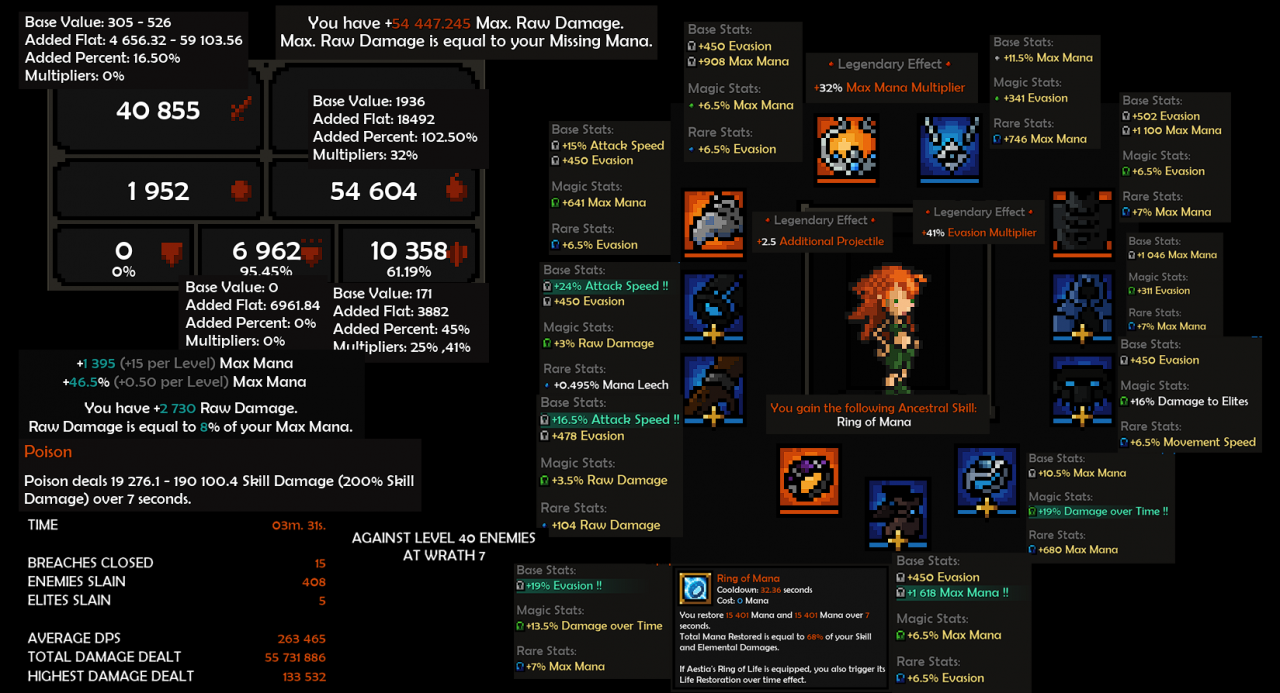 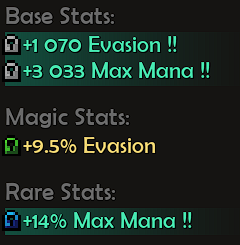 Maybe one day I will show all of my items for this build 🙂 But for now, I will only show my body armor (which the most reinforce item I’ve got on this build).
Good luck to you all to find good pure items !

Thanks to Flame Legrems for his great guide, all credit to his effort. you can also read the Docs from here. enjoy the game.