A guide on the damage output of most standard weapons in the game, up-to-date as of the August 2nd 2021 hotfix patch.

A Guide to This Guide

Most of the numbers given in this guide are approximate; there are some unseen decimals at work when it comes to damage and health, and fire rates have been estimated to the nearest reasonable fraction based on recorded gameplay.

Each gun in TABG usually fires one of seven types of ammo;

Which type of ammo a gun takes can give you an idea of its power, however there is a lot of variation even between guns which fire the same ammo. Try to keep a mixture of guns that take different types of ammo with you, so you’re not out of luck if you run out of one type.

Guns which fire Bolts, Musket Ammo or Taser Ammo tend to have a short range before the bullet drops to the ground. Attach a Fast Barrel to these guns if you find one!

Also, guns which fire Taser Ammo can stun the opponent if they hit! They won’t be able to aim or move for a while, but be careful as they can still hold down the trigger.

Each gun in TABG also uses any number of three fire modes;

In this guide, I will be listing how many bullets a gun in Burst mode will fire, as well as which modes each gun is compatible with. 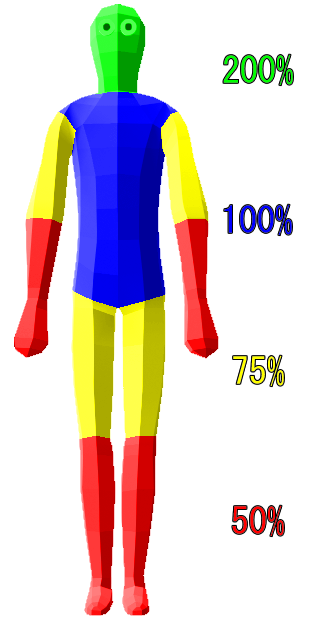 Weapon damage for most guns depends on where your hit your opponent. All damage values in this guide are for the torso unless otherwise stated.

Shots to the head will deal double damage, and can be an instant kill for some weapons.

Shots to the torso will deal regular damage.

Shots to the limbs will deal diminished damage depending on how far down the limb the hit is.

On top of this, equipping the Heavy Barrel to your gun will cause it to deal approximately 130% of its regular damage output. This means a shot to the head can deal up to 260% damage!

Shotguns ignore where on the body they hit, so always aim for your opponent’s centre of mass to make sure as many pellets hit them as possible.

Melee weapons also ignore where on the body they hit, so don’t worry about trying to damage your opponent’s head from that distance.

Weapons start to do less damage the further you are from your target, depending on the gun. Sniper rifles can deal maximum damage from a longer range, while shotguns and pistols lose damage rapidly the further your opponent is.

Machine guns have large magazines and deal damage through sheer rate of fire, however they can be very unwieldy. Find a Weapon Mastery blessing or a Compensator to make them easier to handle! They also all only fire in Auto mode, so manually control your bursts with the trigger.
Name
Damage
Ammo Type
Magazine Size
Fire Rate
Reload Time
Notes
M1989-BAR
33
Normal
30
6/s
2½s
MG-42
20
Normal
80
15¼/s
2½s
Browning M2
20
Normal
500
10/s
3½s
Minigun
16
Normal
150
50/s
3s
The highest rate of fire in the game, find a Storm blessing to apply extra damage!

Crossbows take some skill to use properly as their bolts don’t have a very high range, however in the right hands they can be deadly with their high damage output! Find a Fast Barrel to make them easier to use.
Name
Damage
Ammo Type
Magazine Size
Fire Rate
Reload Time
Auto?
Burst?
Single?
Notes
Crossbow
130
Bolts
1
1/s
1s
×
×
○
Automatic Crossbow
39
Bolts
14
7½/s
1¼s
○
×
○
Crossbow Pistol
91
Bolts
1
1/s
1s
×
×
○
Can be held in one hand
Gaussbow
65
Bolts
1
1/s
1s
×
×
○
Gaussbow bolts explode after a moment, dealing huge damage to your target and anything around them!
Fireowork Crossbow
3
Bolts
10
7½/s
1s
○
×
○
Enemies hit by Fireowork Bolts will have trouble controlling themselves for a few seconds
Balloon Crossbow
3
Bolts
10
7½/s
1s
○
×
○
Enemies hit by Balloon Bolts will gradually float into the air for a few seconds
Taser Crossbow
32
Taser
1
1/s
1s
×
×
○
Stuns the enemy on hit!
Currently does not spawn with the correct ammo, be sure to find Taser ammo elsewhere!

Shotguns are designed for very close quarters, and fire pellets out in a cone in front of you rather than a single bullet at a time. They also ignore where you hit the opponent, so just focus on hitting them with as many pellets as possible! Attaching an Accuracy Barrel will tighten the cone of your Shotgun, making it more accurate.
Name
Damage*
Ammo Type
Magazine Size
Fire Rate
Reload Time
Pellets
Notes
The Arnold
59
Shotgun
6
1⅓/s
1½s
7
Can be held in one hand
Sawed-Off Shotgun
42
Shotgun
2
10/s
1s
8
Can be held in one hand
Mossberg-500
125
Shotgun
5
1¼/s
1½s
10
AA12
55
Shotgun
15
4⅔/s
1s
7
Can be fired in Auto or Single
Blunderbuss
200
Musket
1
1/s
1s
8
Rainmaker
39
Shotgun
15
10½/s
¾s
5
Can only by fired in Auto;
Can’t have scopes attached to it;
Bullets drop off very rapidly, find a Fast Barrel!

*The damage values given in this table are approximate for all pellets hitting the opponent at point blank.

Explosive weapons deal damage in a radius around where they detonate, letting you harm multiple opponents at once! However, the explosions can also harm you if you’re too close to them.
Name
Damage*
Ammo Type
Magazine Size
Fire Rate
Reload Time
Auto?
Burst?
Single?
Notes
MGL
100~
Big
6
5/s
1½s
×
×
○
Fires grenades that bounce for a couple of seconds before detonating
Missile Launcher
50~
Big
10
15/s
2½s
○
×
○
Fires missiles that follow a straight path and detonate on contact, except on contact with an opponent, which will cause a smaller amount of damage like a bullet would

*The damage values given in this table are approximated for detonation at point blank with the opponent.

Other than guns you may also find melee weapons in the field; these do a set amount of damage per swing and also come with a unique secondary function each!
Name
Damage
Hands
Attack Rate
Secondary Damage
Secondary Effect
Jarl Axe
117
Two
1/s
25
Lunges and applies an ice effect in a radius around where you land, slowing down your opponents
Katana
78
Two
1/s
39
Lunges forward at high speed, potentially cutting through multiple opponents
Sabre
34
One
1/s
17
Throws a phantom sword that launches opponents away from it, dealing multiple hits
Rapier
16
One
5/s
23
Launches multiple phantom swords at your opponent, which do take into account where you hit them
Viking Axe
37
One
1½/s
0
Throws a phantom axe which creates an impenetrable ice wall for a few seconds where it lands
Ballistic Shield
26
Two
½/s
0
Passively blocks bullets coming at you from ahead while you’re holding it, does not block bullets from behind while it is on your back
Your fists!
10
Yes, they are
3/s
0
Press X by default to bring them out at any time!

Other than the weapons listed in this guide, keep your eyes open for rare weapons with unique and special effects out in the field! Examples include;

There are also mystical spellbooks to be found, which can be wielded in one hand alongside your other guns! Examples include;

Certain weapon combinations work better than others, and certain blessings or attachments can make the difference in how effective your loadout is! Here are a few ideas to get you started when it comes to what to look for when you land.

Thanks to Onyyx for his great guide, all credit to his effort. you can also read the original guide from Steam Community. enjoy the game.

Here is a video guide on how to find all locations for every Collectible in the game!   Aragami 2 All Collectibles...

If On A Winter’s Night Four Travelers: Secret Achievements Guide

Pathfinder Wrath of the Righteous: All Restored Crusader Relics Guide

This is a guide to all of the restored relics in crusade mode, and what gear you can get from it. It should be noted that some of the...

Here you will find a complete guide to obtain all the fish and the Godly Angler achievement. Warning may contain some...

Master the Loop! This guide will detail where to find & how to open every Safe, Lock & Door hidden around the Isle of...