While being a really good game, Transistor suffers from having severe fps drops on the PC version. Here’s how to improve it…

There’s no doubt that Transistor is a really good game, even when taking issues some players have with it into account. However, it suffers from severe fps drops for a number of players, making it run at unbearable framerates such as 15-20 fps. To make the matters worse, there were no guides online to put all of the possible solutions in one place and help others, meaning one had to search everywhere to find an answer… until now.

Unfortunately, Transistor does not feature proper graphical options and just lets you change the resolution. This, in addition to the game’s engine being an in-house one, means our hands are unbelievably tied when it comes to fixing its issues. Because we do not have much freedom when it comes to altering the configuration files (like Unreal Engine) and there are no documentation on the web that lists the launch commands (like Unity).

But that does not mean we should give up. So, here are all the methods I could find to improve the game’s fps. If you have other methods that can be used, feel free to mention it in the comments and I will credit you if it proves useful.

NOTE: THE METHODS MENTIONED IN THIS GUIDE ARE NOT %100 GUARANTEED TO WORK. THEY MIGHT IMPROVE YOUR FRAMERATE, BUT FAIL TO OFFER A STABLE 60 FPS EXPERIENCE.

The very first thing we need to change is the resolution; as it plays a big role in a game’s performance. Simply go to the game’s resolution settings and lower it to a value that feels comfortable for you… if you can find it, that is.

Unfortunately, Transistor is a disaster when it comes to the number of resolutions it offers you. So you won’t even find some standard resolutions such as 720p in it. To alleviate this issue, you can use custom resolution launch commands to force the game to use your desired resolution. Just open the game’s properties in Steam Client and add this to the Launch Options dialog box:

However, be aware that the fullscreen support is incredibly wonky in this game. Meaning some might not be able to get a proper fullscreen mode from it. For example, the game always changes my system’s resolution, but still runs in a window instead of filling the screen (meaning my system’s desktop and taskbar are still visible). If this happens, you have no choice but to enable windowed mode (either from settings or the /windowed launch command) and use third-party software to stretch the game’s window.

If this did not help you, go to the next step…

You know, Transistor is not like Hades that lets you switch between different versions with a dialog box before launch. Instead, the game itself decides on which version to use and for some odd reason, it might choose the 32 bit version. Meaning that it won’t use the benefits of 64 bit software. So you need to check if the game launches in 32 bit or 64 bit mode.

To check this, open Task Manager while running the game and look at its process in the list. If you see Transistor (32 bit), then it means the game is wrongly using the 32 bit version of the game (unless you’re running the game on a system without 64 bit support). In this case, you have to do this:

Now, this method is not %100 sure to work. In my case for example, the game refused to launch when it was executed directly from the folders. If this happens, then you must change the game’s folder architecture to force the 64 bit version:

The game should now start without issues and with a much higher framerate. If anything unexpected happened, simply revert the folder names to what they were before modifications, or delete them both and verify the game’s files for a redownload. And if you did not see any improvements, go to the next step.

Now that the usual methods have failed to fix the game, we need to use launch commands to force some graphical options. Mainly because the game does not have proper graphics settings and just lets you change the resolution.

Just open the game’s properties in Steam Client and add this to the Launch Options dialog box:

This should be the final result: 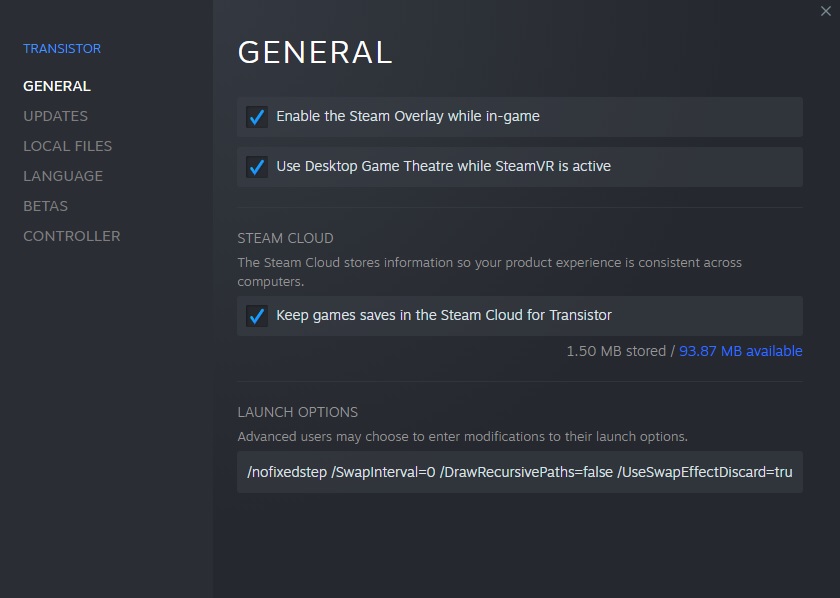 This is a combination of useful launch commands, gathered from all over the Steam discussion pages and PCGamingWiki. In my case, using these commands raised the framerate by 40 fps in the 32 bit version. Although there were some frame drops from time to time.

NOTE: /nofixedstep COMMAND WILL BREAK THE JAUNT ABILITY ON 144hz MONITORS. TO PREVENT THIS, DELETE THE AFOREMENTIONED COMMAND AND CHANGE /SwapInterval=0 TO /SwapInterval=1

After adding these commands to launch options, try launching the game and see how it works out for you. If the problem still did not go away, then…

If this guide failed to help you…
Refund the game if you want. I’m truly sorry, but aside from what you saw here, there are no other fixes available for this game. Also, since the game is really old by now (it came out over 7 years ago at the time of writing this), you cannot expect the developers to come to your aid and fix things; they have clearly moved on.

Therefore, trying to get your money back and spending it on something else would be a good option. Unless you want to cope with the game’s issues, or you have bought the game in a bundle and do not want to give up on the rest of Supergiant Games’ titles.