want a challenge? use this build. It’s hard, not optimal, but in the right hands, very powerful. In the wrong hands you’re gonna get rekt.

This build isn’t a copy and paste build. If you copy the loadout, talents exactly you still won’t replicate it. The build is about maximizing sustainable DPS, challenging your mechanics, and playing a very difficult but rewarding style. The gameplay style emphasizes processing data quickly and moving your fingers quickly. I’m going to go through the loadout and talents quickly, then try to explain how to play it. 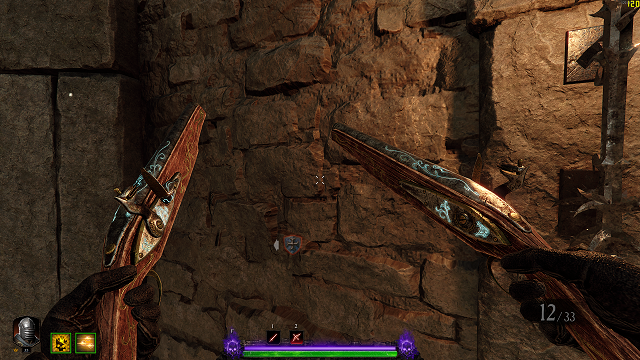 All items are Red with maxed %s. There might be some sweet spot % where you don’t need exactly +10%, but i have not done that research. 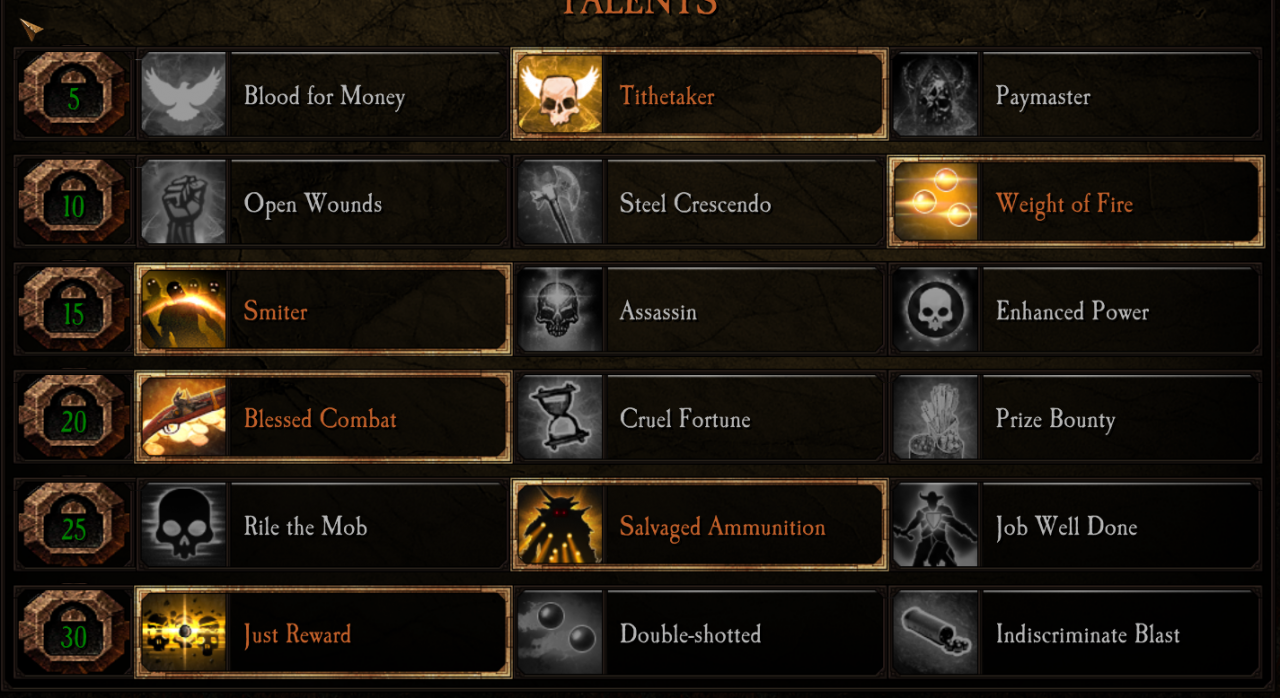 Here is a brief overview of the talents

Only level 20 and 25 are a must. If you want to change something else I don’t recommend it, but you won’t break the build if you do.

You may have already picked up on the ideas from the loadout and talents, but if you didn’t this build revolves around the Blessed Combat talent. In order to secure melee kills, we use the axe because it hits hard. We don’t care about attack speed, we are looking to reset the critical ranged shot. That’s why there are so many +power vs chaos properties. If you can reliably kill the raider then you can reliably 1shot all the infantry units (beastmen are weaker than rotbloods). With the scrounger trait we gain 2 ammo for every crit shot landed. So you shoot your crit, get a melee kill and now you’ve reset the combo. This is how most of our kills will be ranged kills and how we won’t run out of ammo. You need to balance between going weapons-free and conservation mode. If you run out of ammo with this build it’s pretty bad. Salvaged Ammunition is a bail-out, but don’t rely on it.

Its also useful to remember that a single crit shot from the pistol can pierce 3 slave rats, or 2 clanrats ( and their equivalent not blood and beastmen counterparts). you can also one-shot most of those with a single axe swing. you can kill 4 slave rats every second or so. It’s actually kinda insane.

you’ll need to aim with this build. This is already a challenge for a game that is melee-focused.

You must quickly switch the pistols. alt fire pistols are almost too fast and the spread is too wide, especially at range. Using the above properties, every special dies in 1 crit unless super far away then it’s 2, in most circumstances its 2 hits, and its 3 hits if at a super far distance. If you rely on alt-fire chances are you’re going to miss a shot so it’s going to take too long, use too much ammo and it leaves you exposed to the mob. Quick switching allows you to shoot faster and keep your accuracy. If you are not familiar with this concept, very simply after you fire 1 shot, press q twice. This switches to your axe then back to your pistols. Then you just repeat this combo. If you do it correctly, you’ll only shoot out of your right pistol. The left pistol is just for show.

Your primary responsibility in the group is killing specials, then elites, then roaming mob, boss, then horde mob. You should be going into this trying to 360 no scope all the specials. In my 5001000+ hours in the game (yea i’ve been playing this build that long and still optimizing it), almost all of it solo queuing quickplay on Legend, the number one reason for teams failing is because of a special during a horde. People cant break off their focus. Special killing is your job, the faster the better. If youre engaged in a mob fight you need to learn to disengage safely and get your shot off. If youve charged up a crit, its 1 shot 1 kill. In order to reliably kill specials with pistols tho, you will need to quickswitch.

as for teamwork, the brilliant part is that the builds dps is so high you can just carry. This build can take point clearing everything, or it can fight from the back. horde cant catch you because you simply quickswitch the pistols as you run.

You’ll need to balance when to go weapons free and when to conserve ammo, but this is something you[‘ll have to feel out yourself. My recommendation is to not be afraid to use ammo, but dont use the alt fire unless the mob is right there. Even then, control your shooting rhythm.

This build is not the best build. It’s probably actually a bad build, but it is so flipping satisfying. You can carry so hard with this build. The DPS is so high AND it is sustainable AND it’s burst dmg. You actually have to push more than W and mouse1.

I’ve been playing this game a long time, basically since day 1 of vermin tide 1. I’ve been using pistols since then and I’ve had A LOT of practice with the quick switch. It is very possible I have the most time quick switching pistols in the entire world. People just don’t even know about the pistols. Ever wished Kruber’s repeater handgun was more accurate? Well just quick switch pistols and you have it. If you’ve never quick switched pistols you’re gonna need to practice. When I first started my ring finger literally could not push q fast enough. I just didn’t have the finger dexterity. If you keep at it, you’ll get there tho.