Struggeling with Tiltren Boss Matthias Lund? Take a look how to defeat him.

This is just an example fight with Matthias Lund – so everybody gets the basics how it can work. There are a few other tactics possible as well.

I also did in the middle of the battle a mistake – so I got hit by him once. This wasn´t necessary, but I think it´s good to see, what can happen and how you can react.

I am currently playing a run in ironman mode (hard/hard settings). So I only had one chance for this fight and one chance to take screenshots of this fight. Between the screenshots actions of Lund are missing that´s why I describe what happened in between.

In this fight I had 6 mercs – one of each class. All are LVL 4 except the spearman which is LVL 3.
Weapons are the self crafted iron weapons (Tier1) which you can wear from LVL 2 upwards. Armor is just simple middle or light armor (20-30 protection value max) – so nothing what can stand a single hit of Lund.

The idea of this guide should work with any party at any level – the fight just may take longer – but in principle it should always be the same.

The goal is to always forsee the actions of Lund and how to position your mercs. So always keep control of the battle. It is a puzzle which has to get solved. All in all the fight is pretty easy – as long as you don´t make any mistakes or don´t have doubts in the tactics 😉

At the end everybody survived. And I had to use 1 medicine and 2 repairkits .. So it was a very “cheap” fight !

The complete first round was perfect. If you do the following rounds the same way you win without any damage !

The Fight in Details 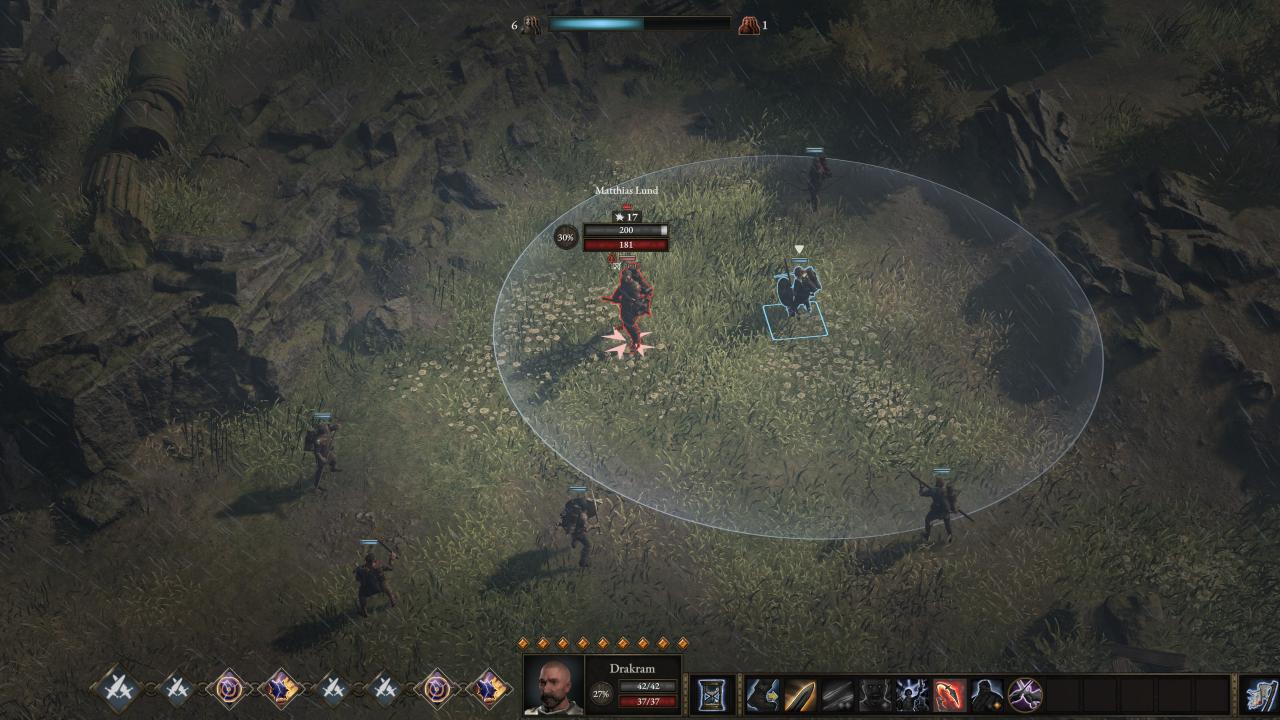 1. This is the starting position and my first move. As you can see, first I had 2 turns – then Lund had 2 turns. I moved my swordsman to the left to throw a spear and then back to this original position (far to the right -> see next screenshot). 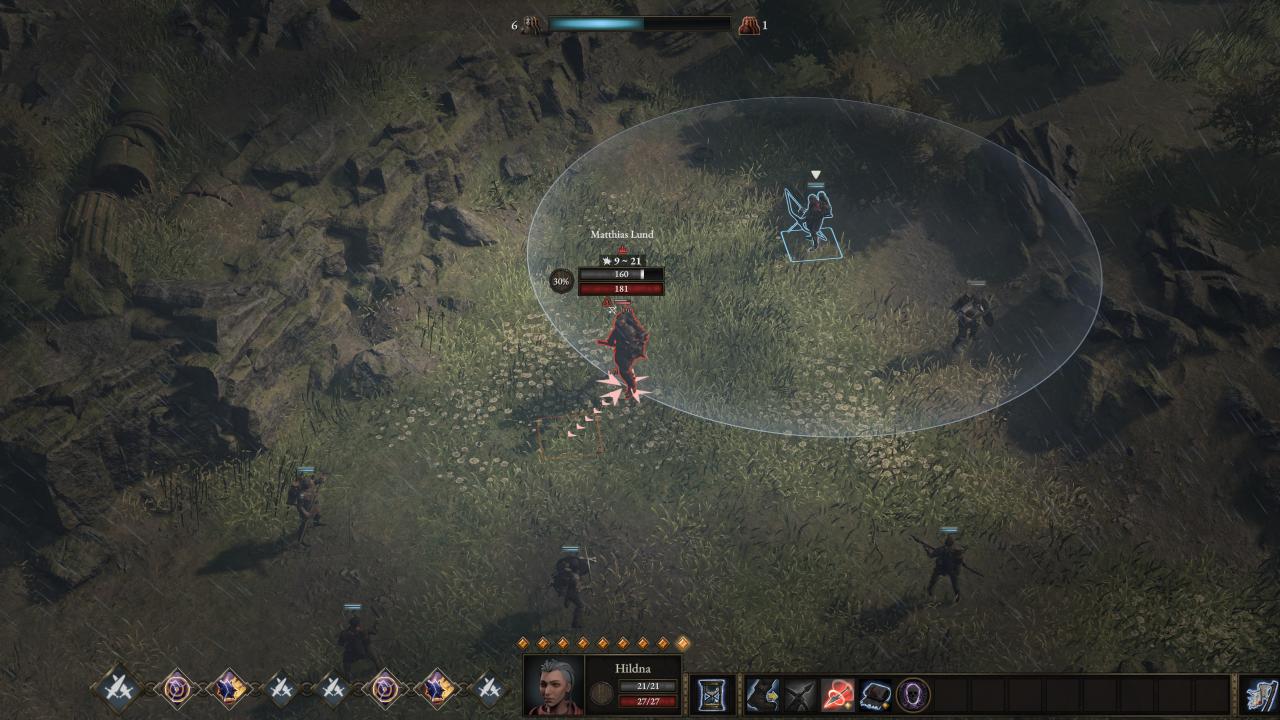 2. Now I was shooting with my archer 2 times and didn´t move him.
The idea was Lund shall judge my brute below him – so I had to guarantee that my brute always stays the closest person to Lund after my first 2 turns. 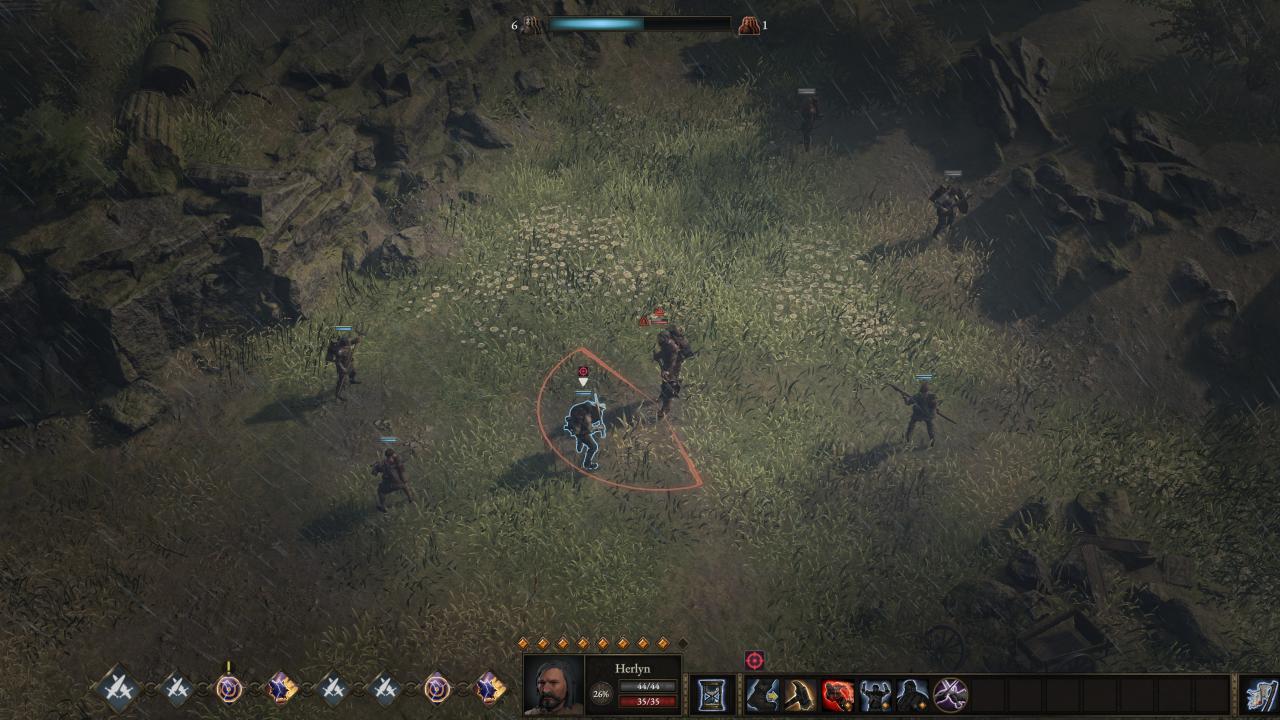 3. Now two actions of lund followed: 1. he judged my brute 2. he moved to my brute and started aiming. as you can see nothing more happened after the 2 turns of Lund. On his next turn he would hit the marked area – so wie have to get out my brute. 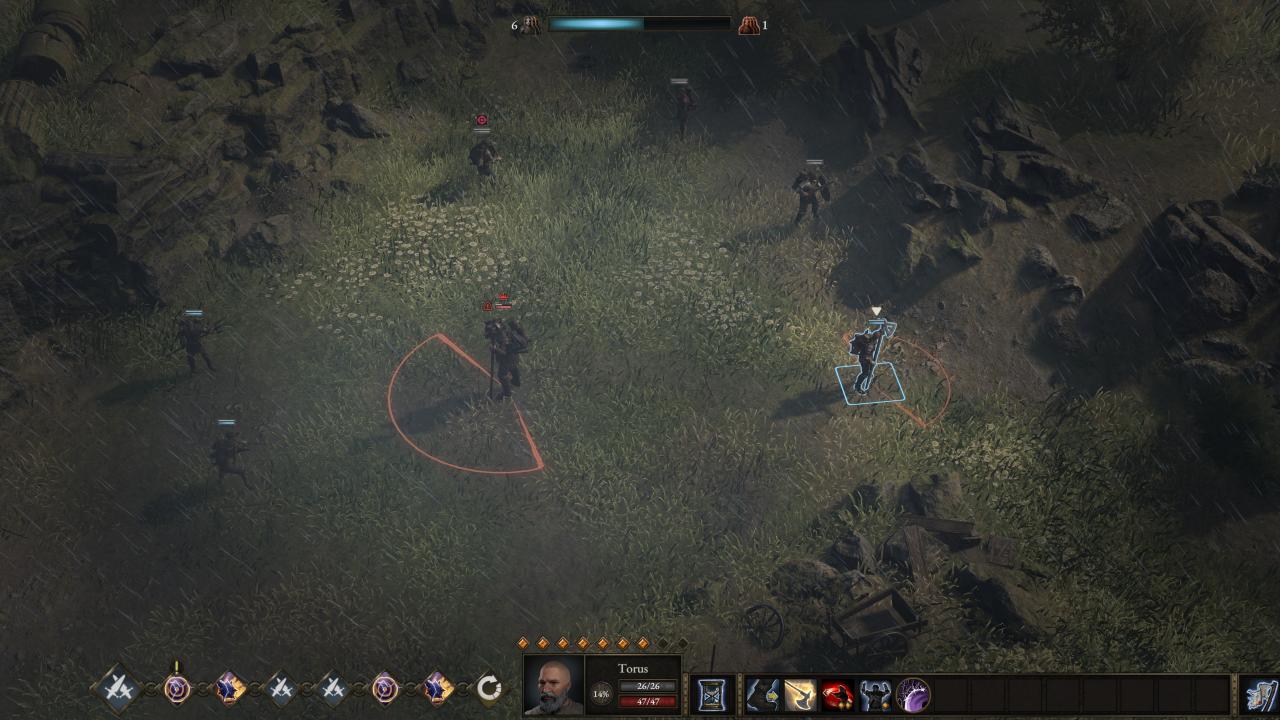 4. So I moved out my brute up to the top – of course not without taking the chance to hit Lund on the way up – you can see Lund already got some damage. After the brute I had another turn. still 3 of my units movable. Lund is close to the two units on the left side – so don´t move them. My Axeman on the right had a bad position – ce could not reach Lund and afterwards retreat again – so I decided to do nothing with him. I just ended his turn 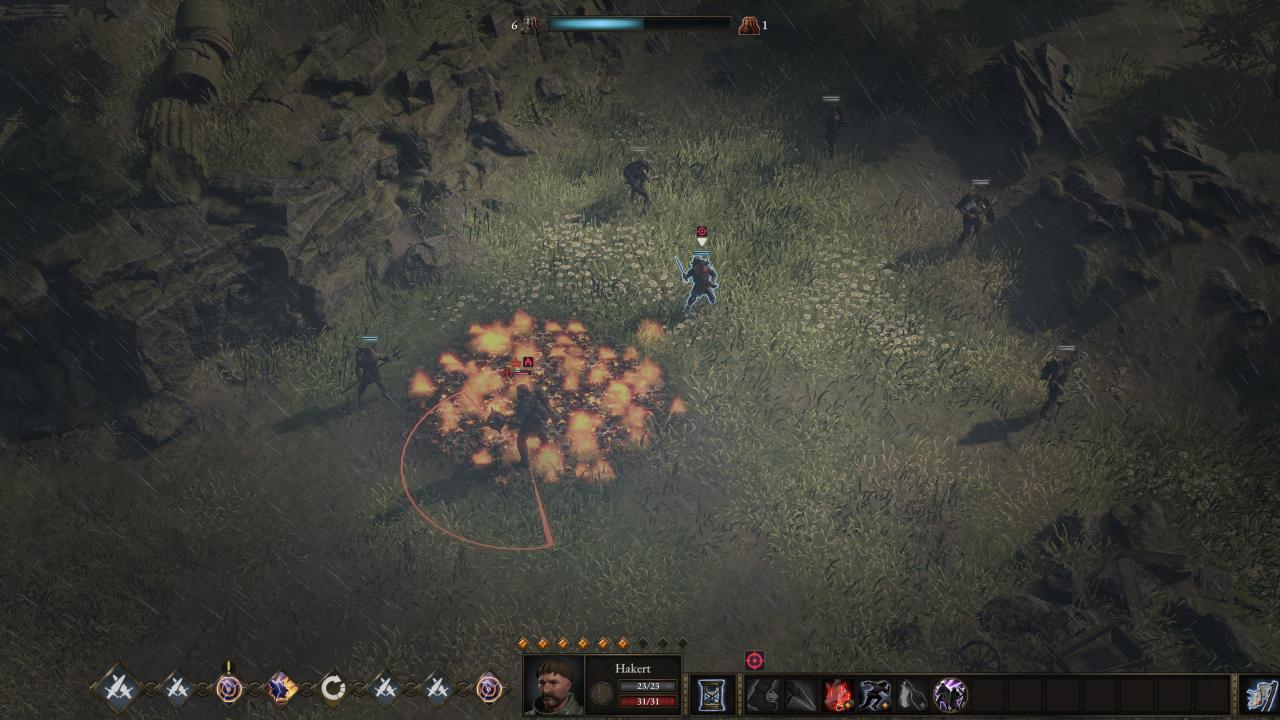 5. No again followed 2 actions of Lund again the same. Because I moved my brute out the the hitbox of Lund – he had to find another one to judge: my ranger because he was closest.
Again the same actions happened (see 3.) – Lund was judging my ranger and with his second action he moved down left to my ranger and aimed again. You can see the hitbox where my ranger stood. Now I had again 2 turns for my last movable units. So I moved the ranger out of the hitbox to the top. Again with an attack on the way. At the end I throwed a bomb at Lund which maks things easier (but not necessary). 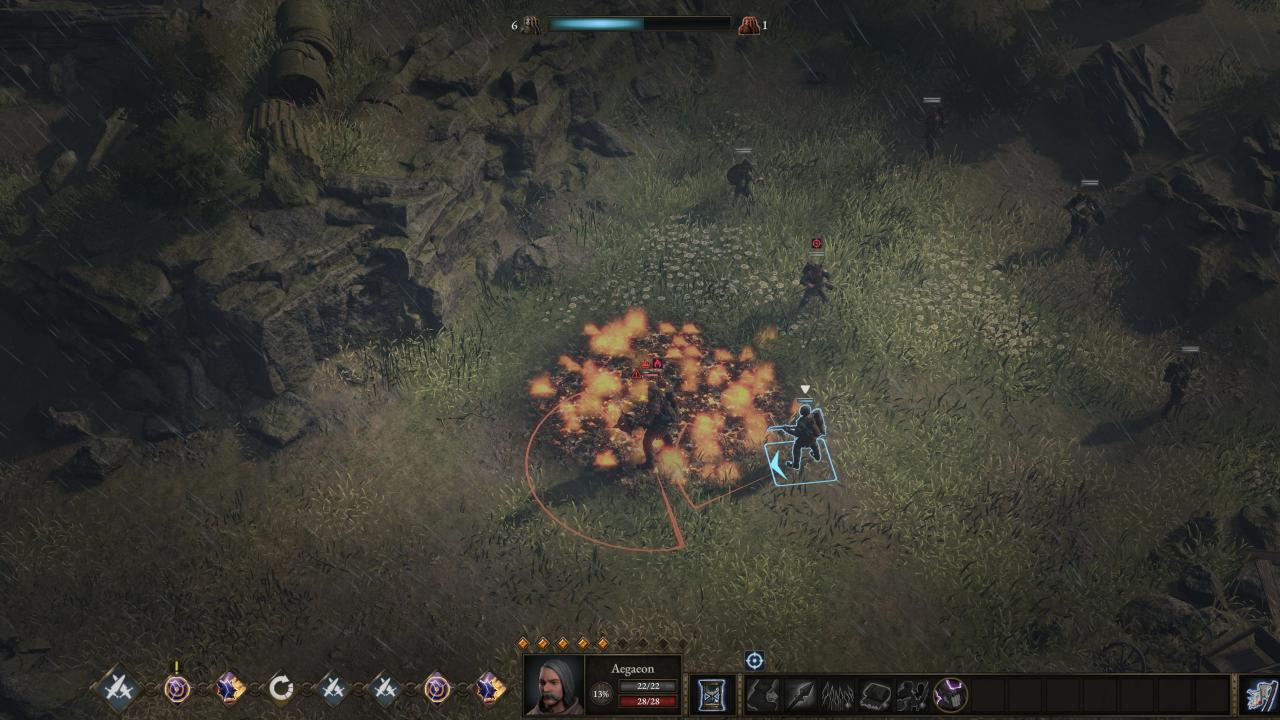 6. As you can see at the bottom after my turn Lund has again 2 actions and then the second round will start (all own units can move again). So I moved my spearman to the right (again hitting Lund on the way) and activated the “Spearwall” skill. 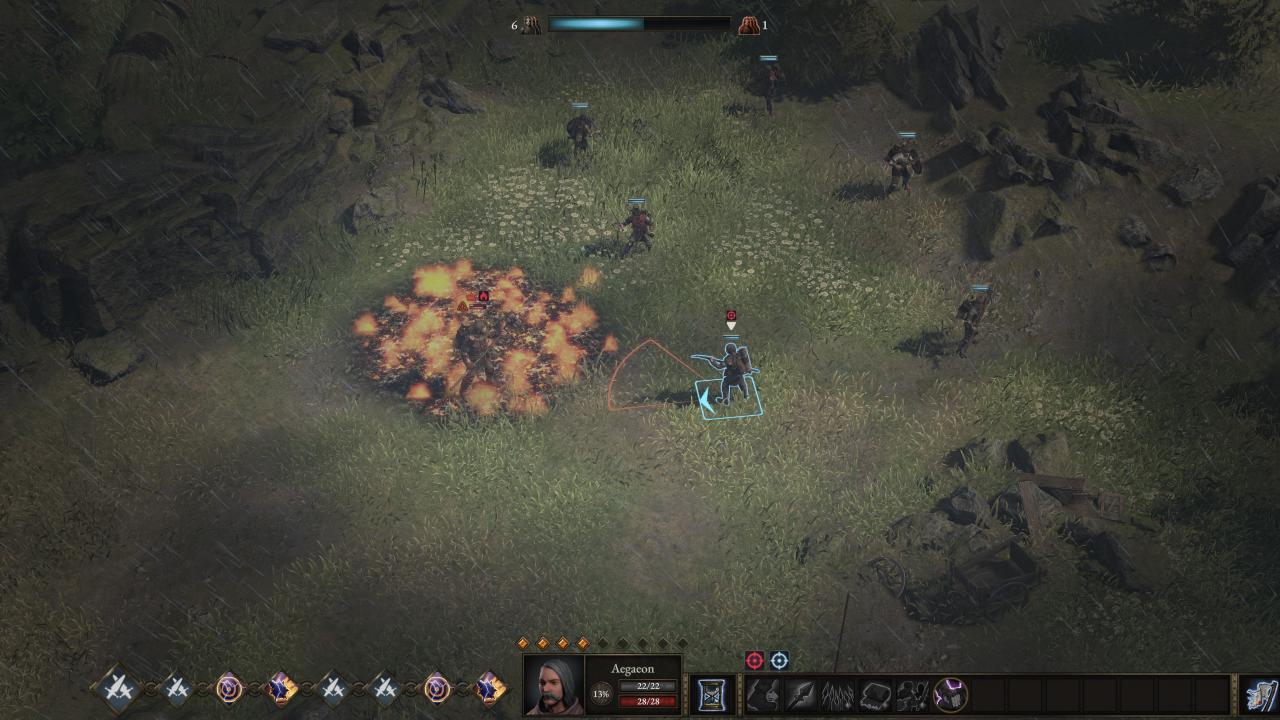 7. Lund had it´s last 2 actions of the first round. As expected he was judging the spearman with its first action and was running to my spearman with his second action to start aiming – but he was interrupted from the spearwall so he had to stay in the fire which gave a nice firedamage. Now the second round startet and I did my MISTAKE. Again I wanted to try the spearwall so I used the spearman to attack, retreat little to the right and enable spearwall. Better would have been not to do anything with the spearman at this time. 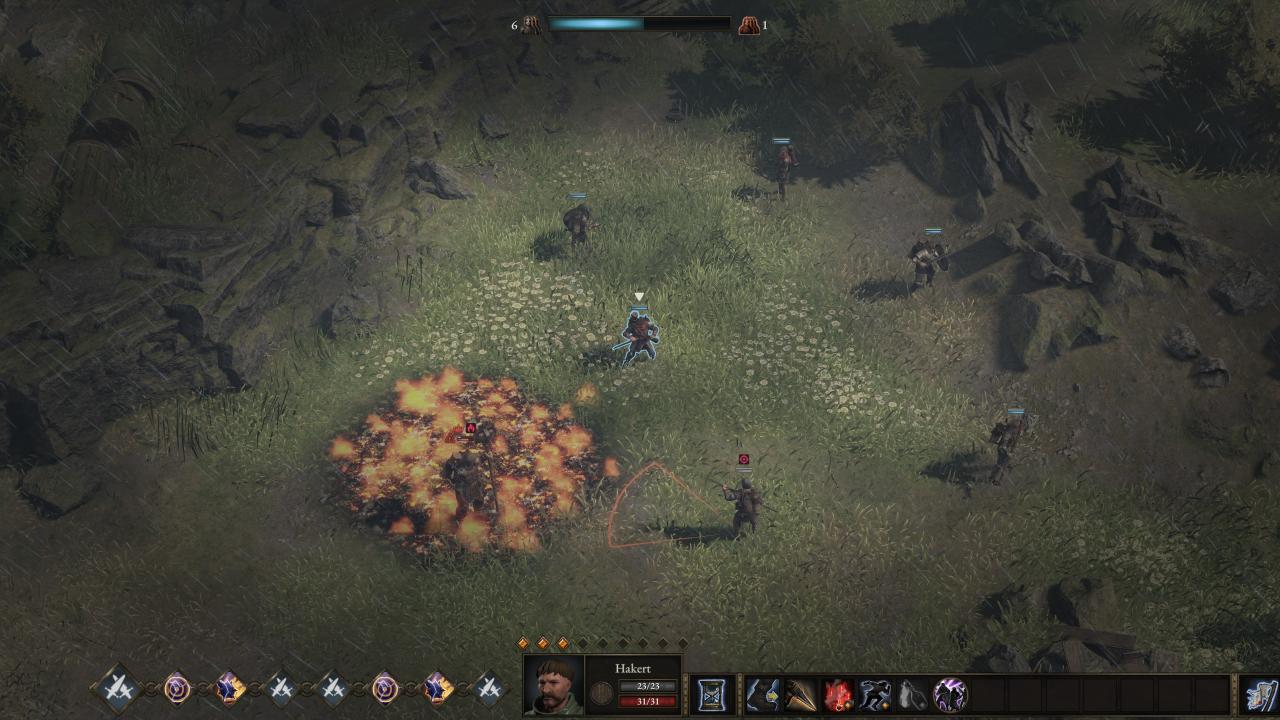 8. Because I lost a little control over the battle, I used my ranger to attack an retreat and as well throw another bomb, because now I wanted to bring him down as soon as possible. Lund was already pretty damaged. 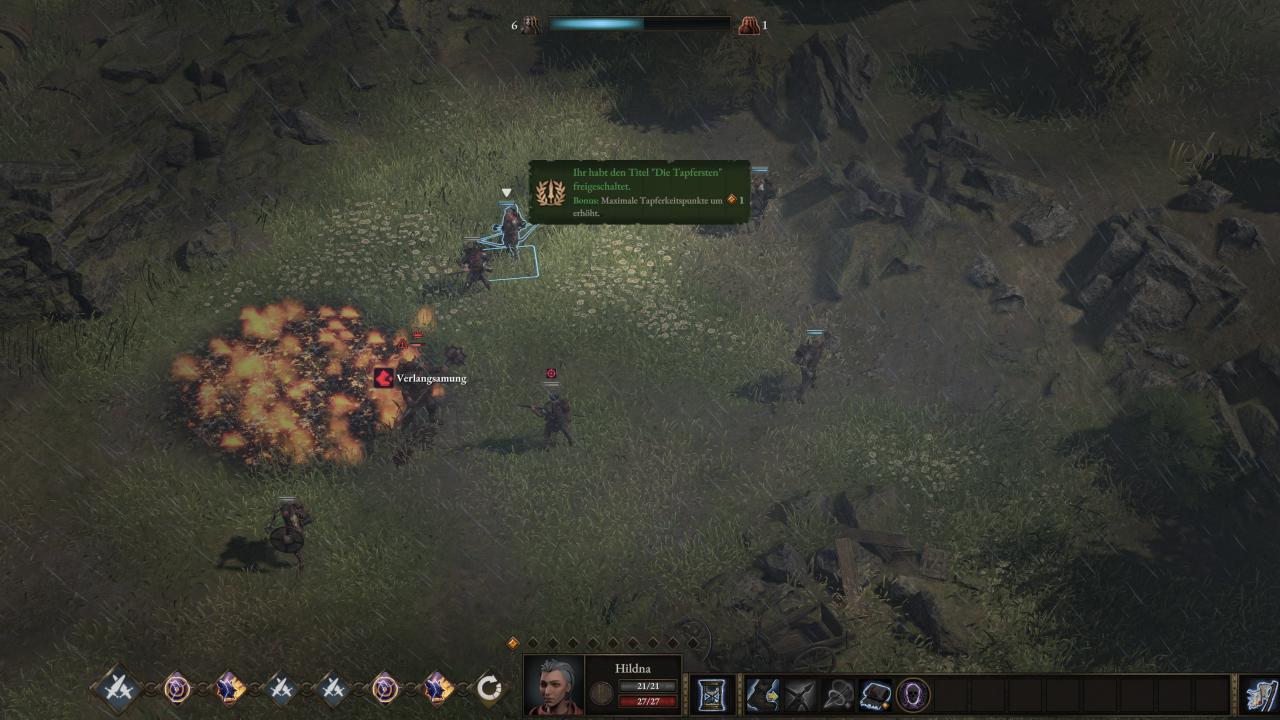 9. Again 2 turns of Lund – he was again judging my spearman (closest unit) and ran with his second action to my spearman for aiming – again he was stopped because of spearwall. Now 2 turns on my side – I used the brute from top to hit him and afterwards the archer to fire again 2 shoots. 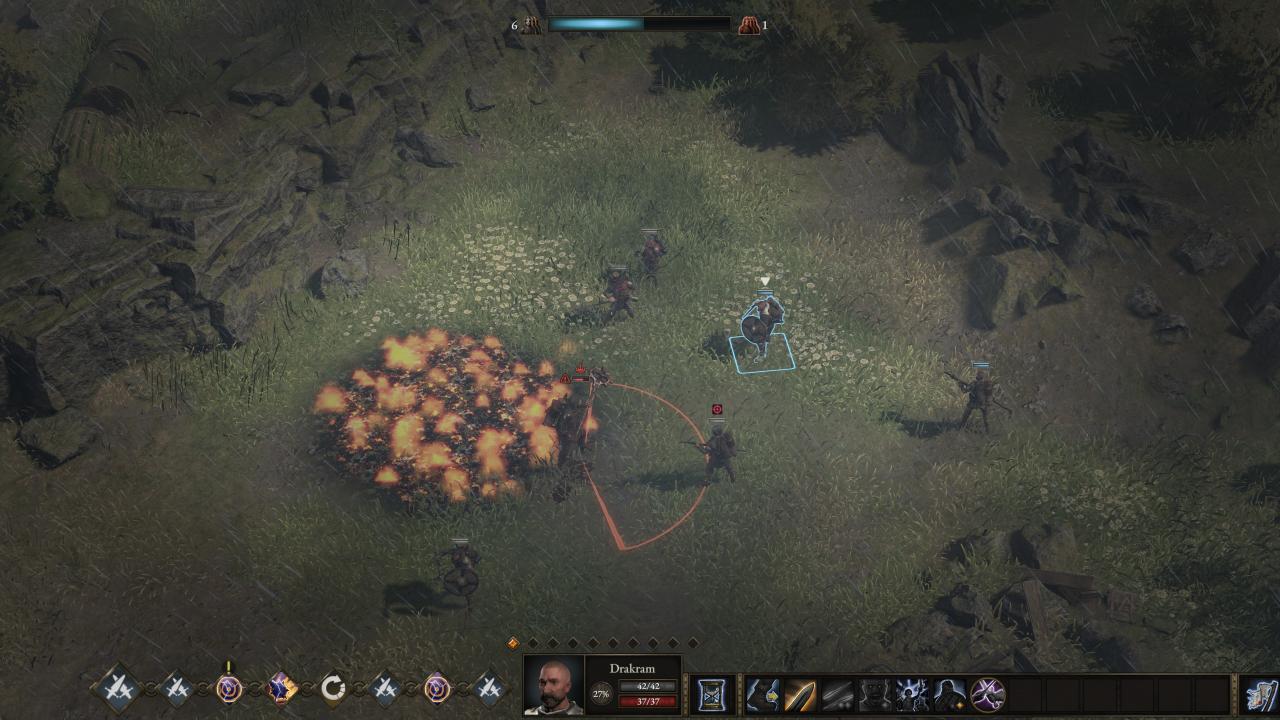 10. Lunds turn again with 2 actions. First action judging, second move to target and aim. You can see: fight already took pretty long – not a single hit up to now. BUT as you can see – the spearman is lost – he stays in the hitbox and was already moved this round.. so no chance to escape. 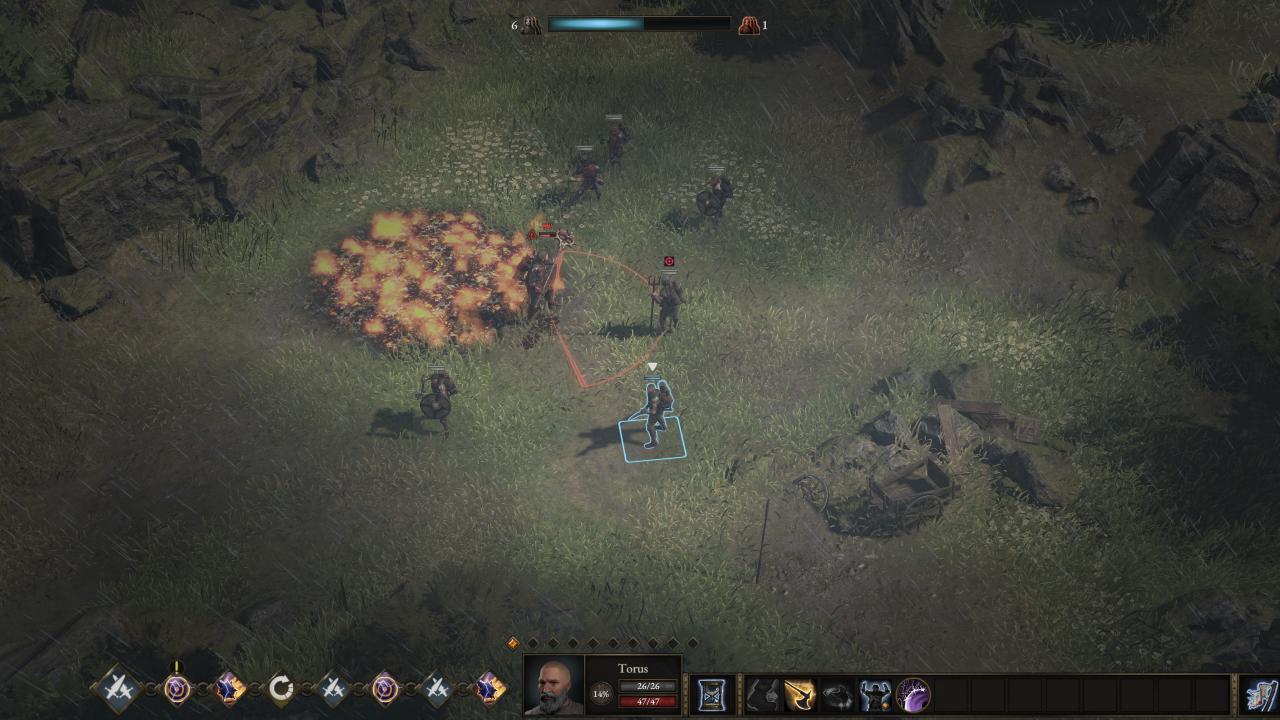 11. My last 2 turns of second round. Swordsman attacked and retrieted. Axeman just moved because he had not enough movementpoints to hit and exit the hitbox of Lund. So I just moved him. 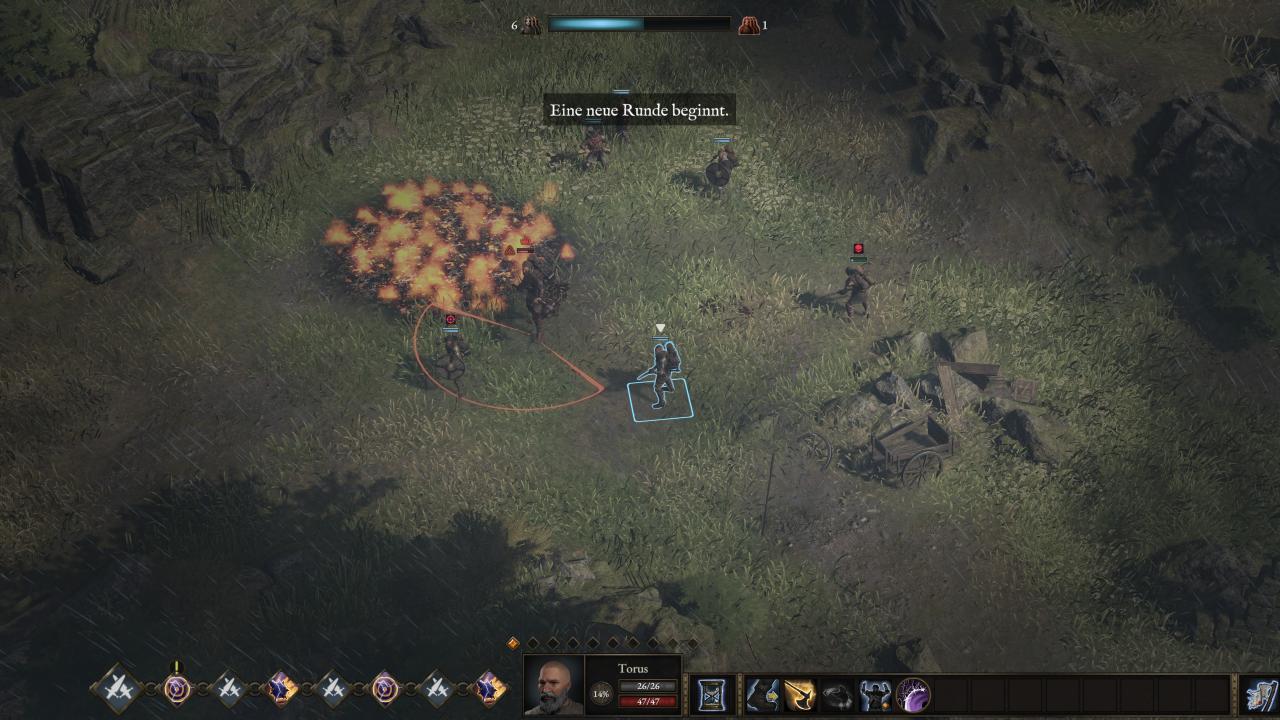 12. Happened what has to happen: Lunds first action was strike my spearman (only happens when there is anybody in the hitbox) and judge my brute (closest unit) with second action again he moved to my brute and started to aim. Glad round was over and round 3 startet.

What happened to the spearman? He was killed (more hitpoints than live and armor of spearman) but only nearly – this is part of game mechanics. Your unit can´t get killed with one attack (doesn´t matter how much life is left and how hard the hit was) -> so spearman is “near to death”: has only half of movement points and can´t do any other action than move. Also he was thrown 6meters away from lund -> that´s why he judged the brute! .. Now it could be time to heal the spearman so he can again fully take part in this battle … so nothing is lost. But this wasn´t needed anymore. 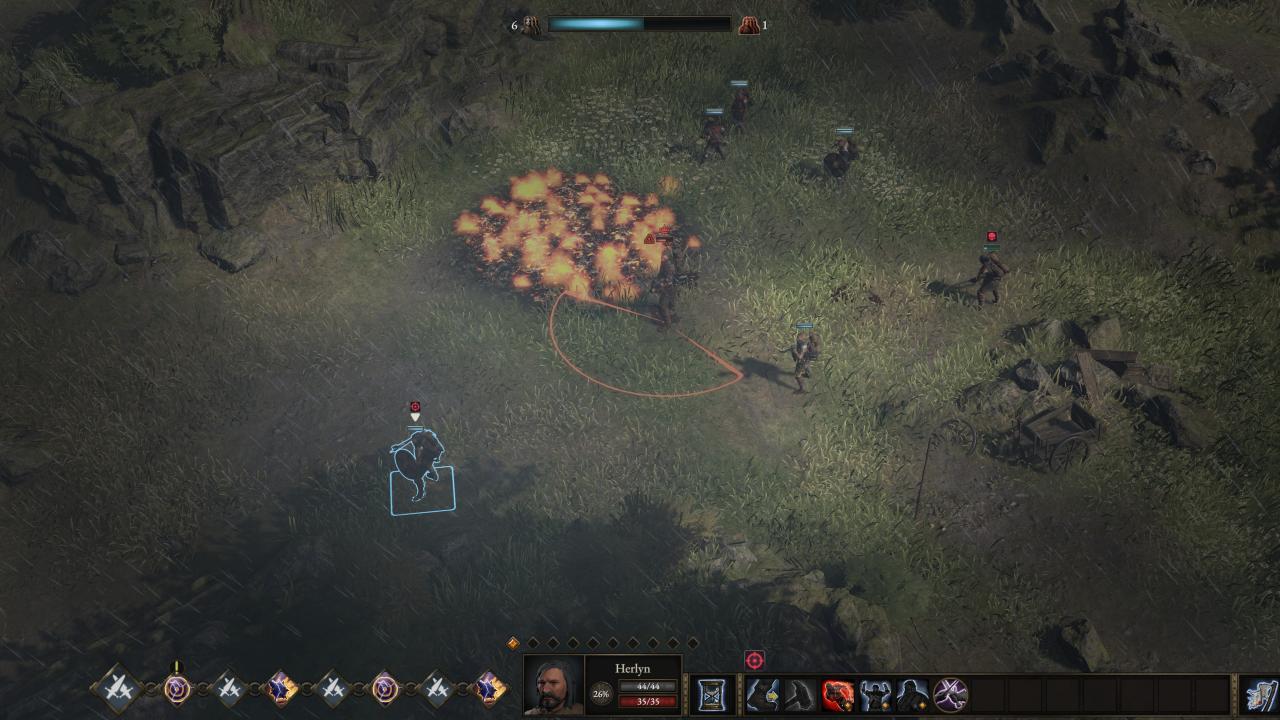 13. Round 3 startet. You see at the bottom sequence of actions has changed .. this also can happen. So we don´t have 2 turns and then Lund has 2 turns – now it is 1 and 1 .. but in general nothing changes. My turn I used the brute to hit Lund hard and move out of the hitbox. 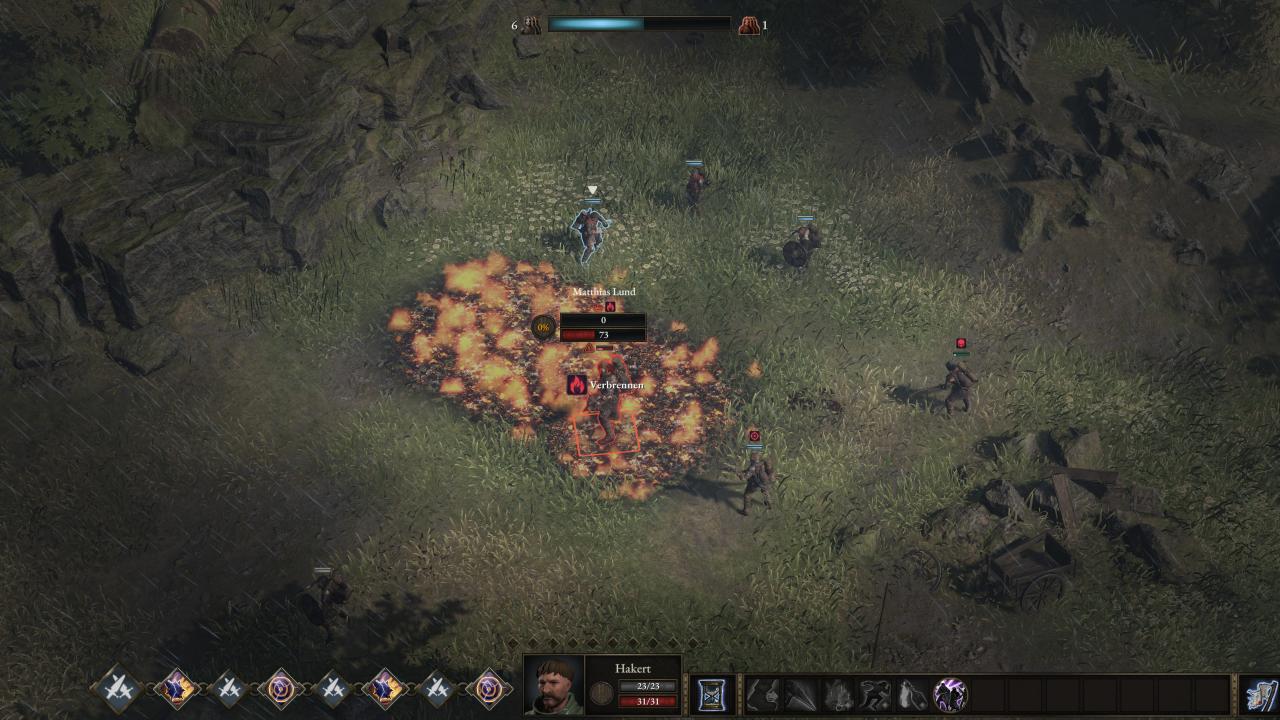 14. Lunds first turn of round 3 – he was just judging (now the closest unit was my axeman) and because he only had one action he could not even move out of the fire. I used the ranger again (hit and retrieve) and also throw another bomb. Bombs are pretty usefull because they don´t cost valorpoints. So it is always a free second attack! 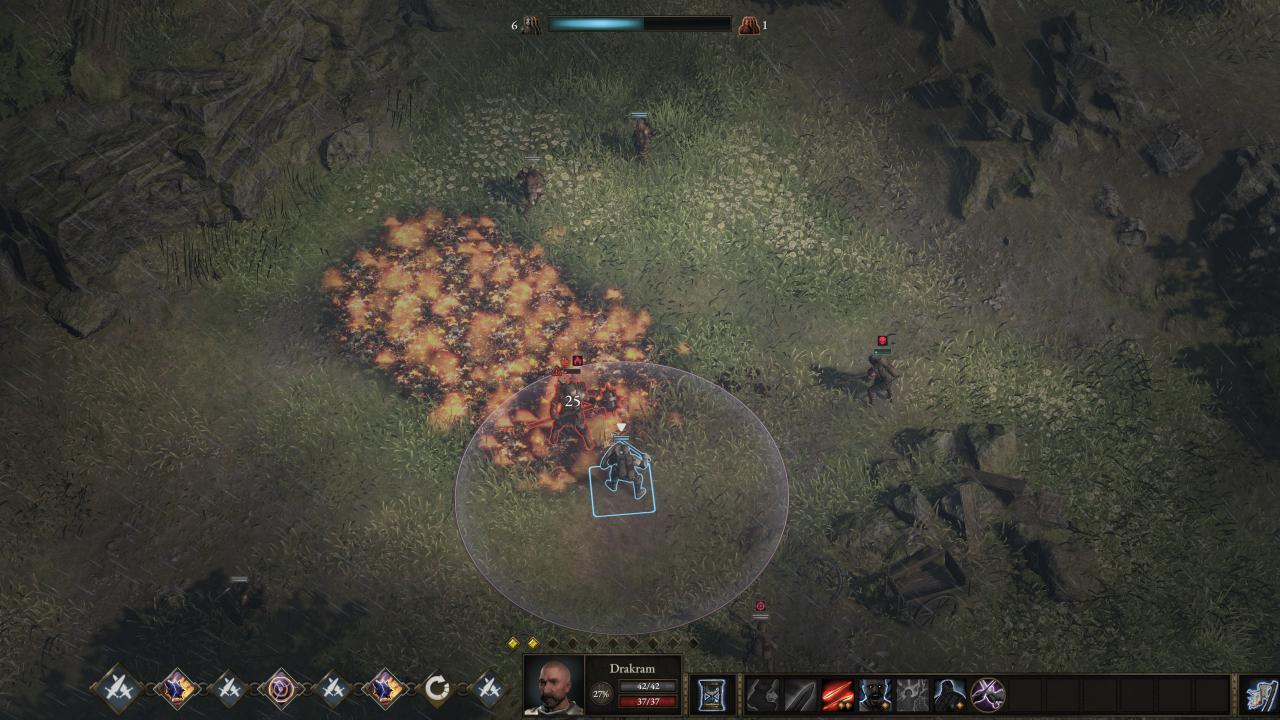 15. Unfortunately I forgot to make a screenshot .. so what happened in between?
-> Lund was running to his target (axeman) and was aiming
-> Axeman was hitting him and moving out of Hitbox to bottom right – good there was a spear so he could also throw this spear
-> Lund was again judging the axeman (which could have lead to another nearly death – but it wasn´t an issue because Lund was already pretty down and there were still 2 more of my units able to kill him before .. and even if – like you see from spearman – this doesn´t have to be the end.
-> my swordsman used it´s captain skill to recieve 2 valorpoints (I was moving him next to ranger and archer so he could recieve those points) then running to Lund with a normal attack and what you see on screenshot because there were again 2 valorpoints he could use it´s special attack (the 2 red swords) to finish Lund.

Thanks to Tigrecito for his great guide, all credit to his effort. you can also read the original guide from Steam Community. enjoy the game.