Legacy of the Duelist recreates classic duels from the series history which are entertaining to play through, but some of them can be incredibly annoying and unbalanced (Deskbots vs Red-Eyes Ritual, really?). Sometimes the default Story Deck from the Campaign duels isn’t good enough, so you’ll want a good custom Deck to play instead just in case. Unfortunately, it’s not as simple as building a Deck from any cards you want, and you’ll have to obtain cards from duel rewards or pack openings before you can use them. You gain access to more cards by progressing through the Single Player Campaign, but you’ll want better cards to play through it in the first place. Therefore, this guide will show you a Deck build using cards that are available as early as possible to win duels easily with Demise, King of Armageddon, what cards you need, and how to obtain them. 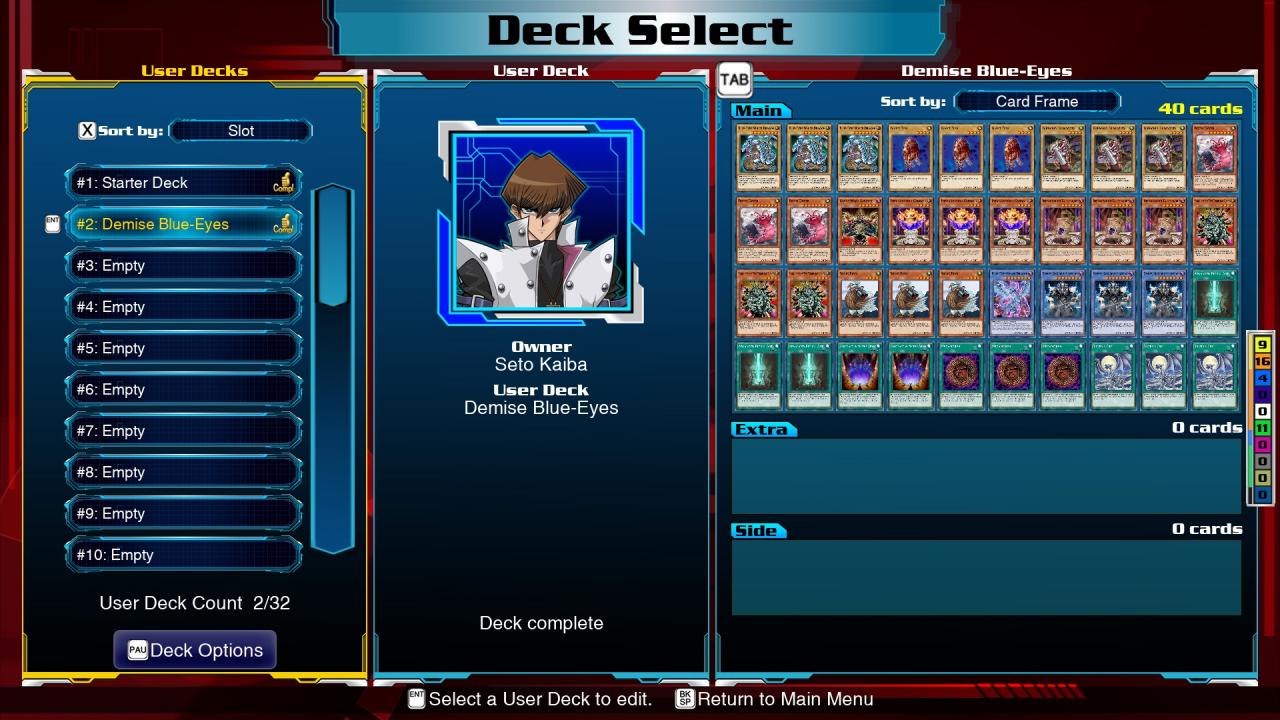 This is the Deck profile that we’ll be building. The goal is to summon Demise, King of Armageddon with Advanced Ritual Art, use his effect to destroy everything on the field, and then use cards like Doom Dozer, Megamorph, and Silver’s Cry to OTK your opponent. Demise is a classic Deck that can win duels quickly if your opponent can’t stop it, which is unreliable these days against any real opponent, but perfect for winning any duels against the AI. There are other popular options for beginner Decks to farm Duel Points and rewards like Exodia draw and Blue-Eyes Chaos MAX OTK, and those are fine options, but I think this Deck is more fun to play, and Demise is one of my favorite monsters. Here is the Deck list for each card:

Again, this is built using cards in packs that are all available as early as possible, so some of them aren’t as good as cards you can get later. You’ll want to replace these Normal Insects with Insect Knight and Neo Bug or even Shiny Black “C” Squadder, but those aren’t available until much later, and hopefully you won’t need to rely on attacking with your Normal monsters in the first place. Swing of Memories is a more versatile option for summoning Normal monsters from the graveyard instead of just Blue-Eyes, but Silver’s Cry is available before Swing of Memories, which comes from the Alexis Rhodes pack from the GX Campaign. Feel free to swap them out when you get Swing of Memories if you prefer. Blue-Eyes Chaos Dragon adds one more Ritual Monster to the Deck and is a powerful monster that is difficult to get rid of and can protect you if you aren’t able to OTK. Contract with the Abyss adds two more Ritual Spells to the Deck and can summon both Demise and Chaos Dragon. Great Maju Garzett is a great option for getting more Attack power after destroying the field if you haven’t used your Normal Summon, by tributing a Special Summoned Blue-Eyes White Dragon or Doom Dozer, in case you didn’t draw Megamorph. You can swap him out for another Chaos Dragon, or swap them both out for Blue-Eyes Chaos MAX Dragon, by preference. However, the most glaring omission to this Deck profile is that we’re running three copies of Sonic Bird instead of Impcantation Chalislime. Regrettably, Chalislime isn’t available until very late in the Campaign, and that card alone would add a great deal of consistency to this Deck. Chalislime is a mandatory addition if you plan on playing a Deck like this long term. As it stands, Sonic Bird is another Normal Summon, but it searches a Ritual Spell, which allows us to use Candoll’s effect more consistently. Since we have a low number of Ritual Monsters in this build, we want to be able to search them with Talismandra by using Candoll’s effect as often as possible.

If you’re summoning Blue-Eyes Chaos Dragon, you’ll want to tribute a Blue-Eyes White Dragon in order to get his effect and deal damage more easily. Otherwise, search for Demise and Advanced Ritual Art using cards like Manju and the Impcantations. Use Advanced Ritual Art to summon Demise, King of Armageddon. If you have Silver’s Cry in your hand, send a Blue-Eyes White Dragon from your Deck to the graveyard. If you have a Doom Dozer, send two Normal Insects instead. Use Demise’s effect to destroy the field, then summon Doom Dozer or Blue-Eyes depending on what cards you have in your hand, equip one of them with Megamorph while your Life Points are lower than your opponent’s, and attack for what should be 8000 damage exactly with the perfect combo, being sure to attack with your monster equipped with Megamorph first. This is a simple and fairly consistent way to win duels against the AI quickly and easily using cards that are available in the first Yu-Gi-Oh! Campaign!

You can find all the cards in this Deck in the first five card packs from the Yu-Gi-Oh! Story Campaign, which can be purchased in the Card Shop with Duel Points. Joey Wheeler in particular grants access to a wide collection of Ritual cards that makes these powerful Ritual beginner’s decks possible. In specifics, the cards you’re looking for in each pack are:

While it’s annoying, you’ll just have to keep opening each pack until you get all the copies of each card you need since it gives you random cards each time. Now the question is, where do you get the Duel Points to keep buying these packs? This is where the most basic form of farming in this game comes in: Surrendering a lot. 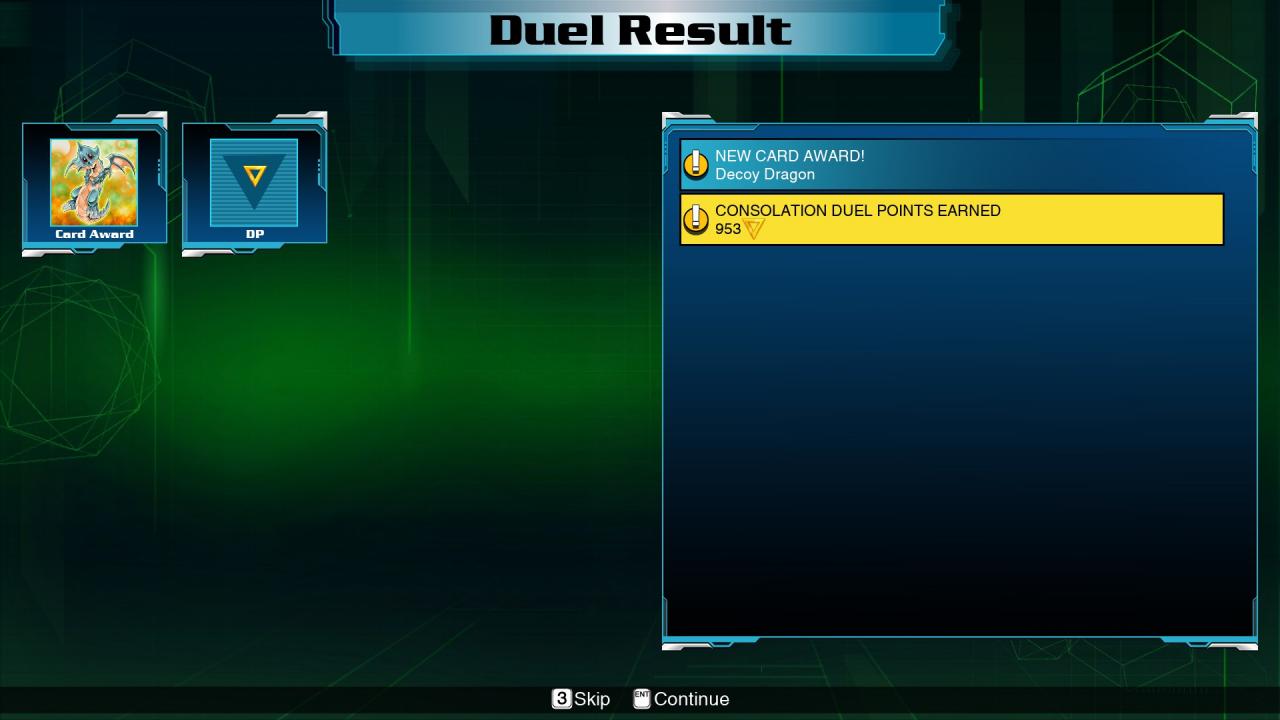 Yes, the most efficient way to get Duel Points without a good Deck in this game is simply to keep playing any AI duel repeatedly and surrendering as soon as the duel starts. Each time you lose a duel, you’ll be rewarded with a card from the Deck you were playing against and some Duel Points as a consolation prize. This can be in any of the Campaign duels or Duelist Challenges. While you’re farming Duel Points to open packs this way, you should try to progress through the Campaign enough to unlock the Duelist Challenges for Bonz and Seto Kaiba and spend time farming them. Why? Their Decks can give you many of the cards you’re looking for without needing to find them in packs! Yes, Seto Kaiba’s Wrath of the Dragon Duelist Challenge can give you cards like Blue-Eyes White Dragon and Silver’s Cry, while Bonz is playing Armageddon – He’s playing a Demise Deck himself! 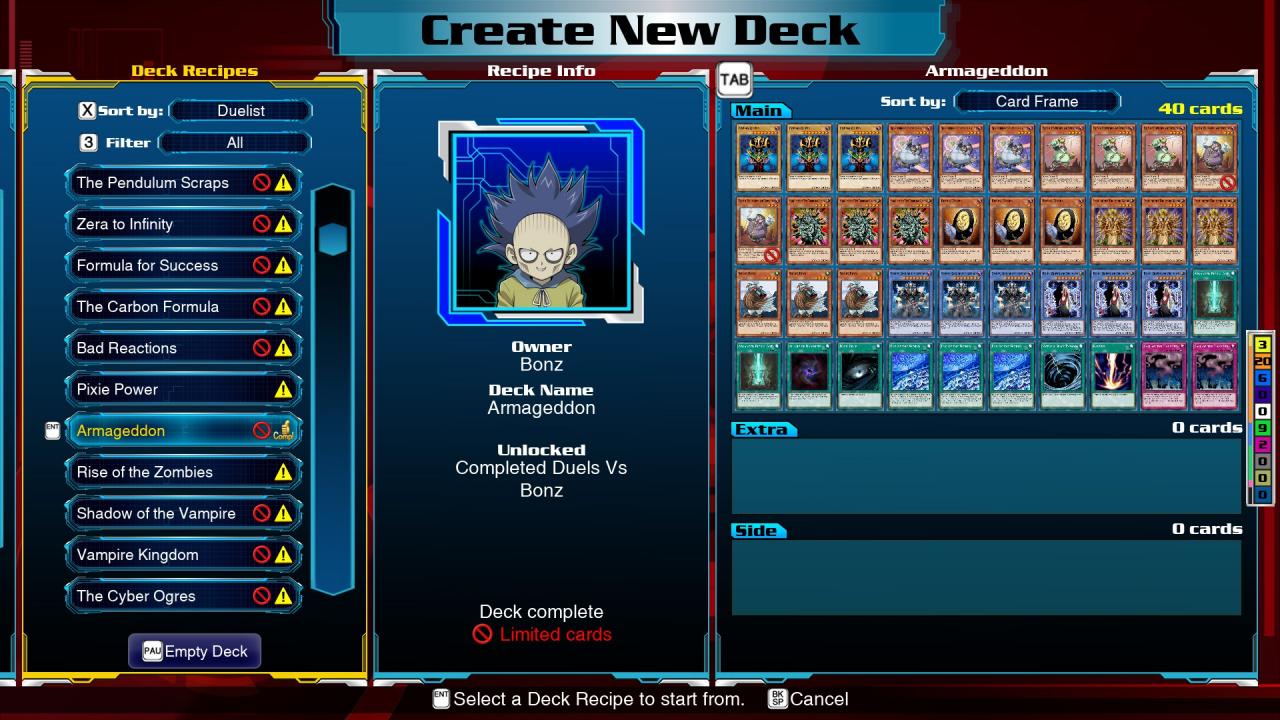 These two duels are good for farming to get the cards in this Deck rather than random pack openings, and if you can find any duel with cards you’re looking for, it’s much easier to get those cards by playing against them and getting Duel Point rewards as well, rather than spending Duel Points in the Card Shop. You can simply keep surrendering to rack up consolation rewards as quickly as you can and open up packs to find cards that aren’t in the Duelist Challenges, but once you have enough cards to play the Deck semi-consistently and make it work, you can get much better rewards by winning each duel, and this Deck is all about winning duels quickly. A good way to rack up wins against Bonz’s Armageddon Duelist Challenge is to use the Fusion Structure Deck the game starts you with, and summon the Fusion monster First of the Dragons as quickly as you can. First of the Dragons is immune to Bonz’s Ritual monster effects and can beat them in battle, effectively making it unbeatable in that duel. The only ways he has to destroy it are his Raigeki and Dark Hole, but you’ll only lose to that if you’re unlucky.

Getting Megamorph in particular can be somewhat tedious since you can only find it in the Grandpa Muto pack. It’s the only card you need from that pack, but you need three copies of it. Thankfully, his pack is cheaper than the others.

This is a classic Deck, and I know there are many Deck profiles similar to this one. However, this guide was made to help people make a version of this Deck for this game that’s easy to make early on, and show them where to obtain the cards for it. No Deck is guaranteed to win every time, and this one can still give you some unplayable hands. Still, it should be much easier to win with this Deck than any of the default Story Decks. Just remember, the point of the Campaign is to enjoy the Story duels with the Decks they give you, so only play with this custom Deck if you’re stuck. Since you’re able to make it early, it’s a good way to get past any duels that are giving you a hard time for most of the Campaign. This is also a great Deck to beat all the Duelist Challenges and unlock their Deck recipes so you can see if they have any cards you’re looking for. It’s not likely to win you duels against any actual players, but you can improve it with cards like Impcantation Chalislime once you unlock all the card packs. Whether you want to improve on this beginner Deck and keep building and playing it or simply use it to farm for cards to make your own favorite Deck, this is a great Deck for anyone who just started playing that they can build with the earliest cards in the game.
By Robert E Lee

Ib: How to Enalbe Mod Support with Python

Step-by-step instructions to unpack the game executable into loose files that can be modded.   Introduction Most RPGMaker MV...

Shotgun King The Final Checkmate: How to Kill The Black Bishop

A step by step guide getting the Avenged achievement.   Introduction The Black Bishop is a secret boss you can fight on floor...

30 well-balanced maps to reference for when you're looking for a great map!   30 Well-Balanced Maps The random...

It will showcase all 10 achievements and will include strategies for the mission’s EX   How to get the all-points and the exit...